2013 Nissan NV200: Similar to the Ford Transit Connect . . . But With Notable Differences

The new 2013 Nissan NV200 (left) joins the Ford Transit Connect (right) in the small commercial market. While their cargo areas are about the same size in terms of cubic capacity, the Nissan’s is longer but shorter in height—like the vehicle itself.

Ford broke the ice with its Transit Connect, a high-roof, compact van with front-wheel drive and a gas-sipping 4-cylinder engine. It had already been a success in Europe, where high gas prices made this type of vehicle a logical choice for small businesses. But it evidently wasn’t considered viable in the U.S. until this country saw some high gas prices of its own.

Today, Transit Connects are everywhere. Although a five-seat passenger model is offered, far more common is the cargo version, with its windowless flanks not only offering security for whatever lies inside but also doubling as rolling billboards. Based on this success, other companies have jumped on the bandwagon: Chevrolet briefly offered a windowless version of its HHR compact wagon, and Chrysler introduced the Ram C/V, essentially a steel-sided cargo version of the Dodge Grand Caravan minivan. But neither has been anywhere near as popular as the Transit Connect.

Nissan hopes to have better success with its new NV200. And it’s not just wishful thinking: The company has gone to great lengths to tailor this vehicle to its intended audience.

Compared to the Transit Connect, the NV200 is about six inches longer overall and six inches shorter in height, figures that apply to its cargo area as well. Both have a 2.0-liter 4-cylinder engine, but whereas the Transit Connect mates it to a conventional 4-speed automatic transmission, the NV200 uses a CVT automatic. While some people find the driving characteristics of a CVT a bit odd, Nissan’s are about the best ones out there, and it’s undoubtedly a major factor in the NV200’s 3-mpg advantage in the EPA city fuel-economy rating. (The NV200 carries an EPA rating of 24 city/25 highway vs. the Transit Connect’s 21/27, so, oddly, the Transit Connect has a better highway rating.) Two models are offered: the S, at $19,990 (about $1,200 less than the base Transit Connect), and the SV, at $20,980. Destination charge is $795.

Inside, the NV200 is all business. Instrumentation is clear but minimal, the audio and climate controls are simple and logical (though just a bit out of easy reach), and the driving compartment is trimmed in bland, hard plastic. The driver seat includes height and lumbar adjustment, but the steering wheel neither tilts nor telescopes. The outboard edges of both cloth seats have a vinyl-covered bolster to minimize wear. Cabin storage is quite generous, with a glovebox, large dashtop tray, cupholders and three small trays in the console, map pockets, and an available console box that can hold hanging folders. Also offered is a storage tray under the passenger seat.

The cargo area is equally impressive. Dimensionally, it’s 82.8 inches long, 54.8 inches wide (48.0 inches between the wheelwells), and 53 inches high, with a total capacity of 122.7 cubic feet and a payload capacity of 1,500 pounds. But that’s not the whole story. Available are six floor-mounted tie-down hooks and 20 body-side mounting points for shelves and racks, so you don’t have to drill into the body supports. There are sliding doors on both sides, and the rear cargo door is split 60/40; both of the split doors can be opened up to 180 degrees. There are also available roof-rack mounts.

The S comes with all the basics, including air conditioning and power windows. Available either on the SV or as options are windows in the rear cargo doors, power remote locks, cruise control, hands-free cell phone link and text messaging, MP3 player, satellite radio, navigation system with traffic and weather, USB port, 5.8-inch touchscreen, and a rearview camera.

On the road, the NV200 is quite carlike. Step-in height is low, and a high seating position (courtesy of the standard height-adjustable seat) offers a commanding view forward. The powertrain provides a good jump off the line and quick—if not particularly strong—passing response at both around-town and highway speeds. The ride is quite absorbent over bumps, and there’s little body lean in faster turns. Steering effort is low, and the turning circle is fairly tight. Downsides include thick roof pillars that block front-corner vision; a lack of padding on the door tops and armrests; a sun visor that, when pivoted to the side, doesn’t come close to covering the whole window; and smallish outside mirrors (though both include separate wide-angle lenses).

Although aimed at the commercial market, it would seem as though the NV200 would also serve those who want a reasonably small, economical vehicle that can haul stuff—essentially, a more weatherproof version of a compact pickup truck. The biggest problem for some would be the lack of rear side windows for visibility, as it’s rather unnerving for the uninitiated to drive a vehicle whose outward vision stops at their shoulder. But that may be corrected in the near future when the passenger model is offered for taxi use.

With their combination of cargo capacity, parking ease, and decent fuel economy, it’s easy to see why these small beasts of burden have recently become a popular class of vehicles. What’s more difficult to understand is why they took so long to arrive. 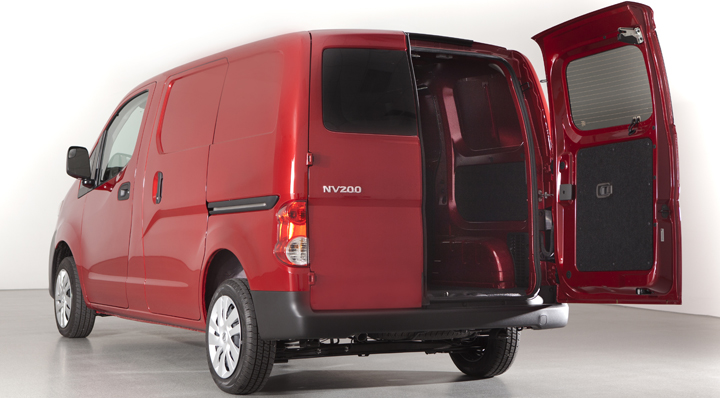 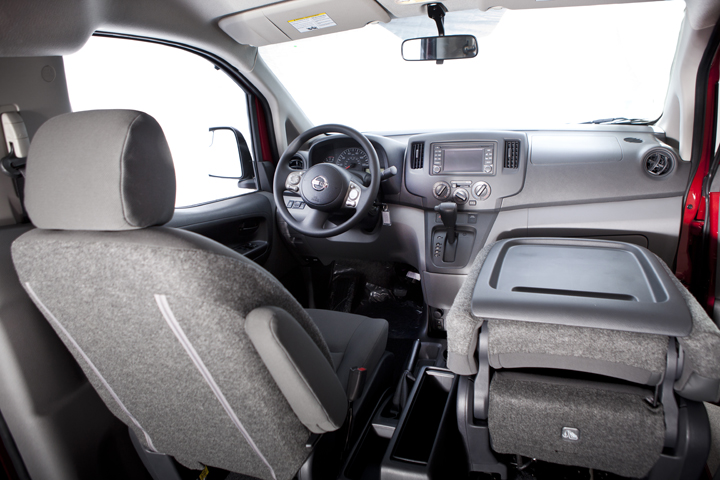