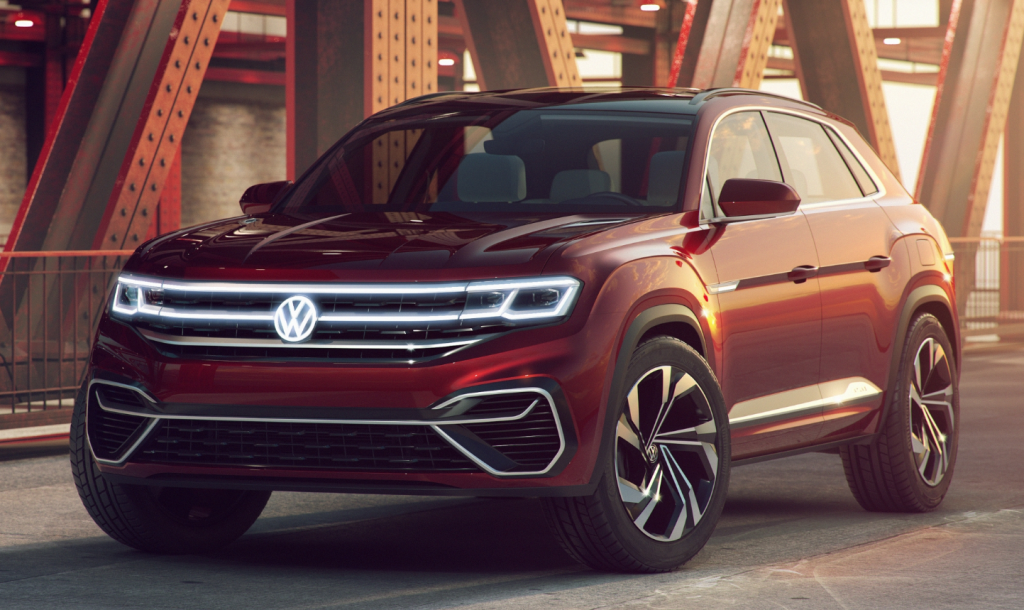 Volkswagen provided a preview of the forthcoming five-seater version of its Atlas midsize SUV when it unveiled the Atlas Cross Sport Concept at the 2018 New York Auto Show. VW calls the Atlas Cross Sport a “near-production” concept, and says the production version is scheduled to be launch in the U.S. market starting in 2019.

The Atlas Cross Sport is essentially a shortened version of Volkswagen’s seven-passenger Atlas SUV, which went on sale last year as a 2018 model. Both vehicles are built on Volkswagen’s versatile MQB platform, but the Cross Sport is 7.5 inches shorter overall on the same 117.3-inch wheelbase as the Atlas.

The Atlas Cross Sport Concept is clearly intended to be a sportier vehicle than the 7-passenger Atlas, as evidenced by its “coupe-like” profile with a sharply sloped rear hatch, aggressively styled front and rear fasciae, and beefy 22-inch aluminum wheels. 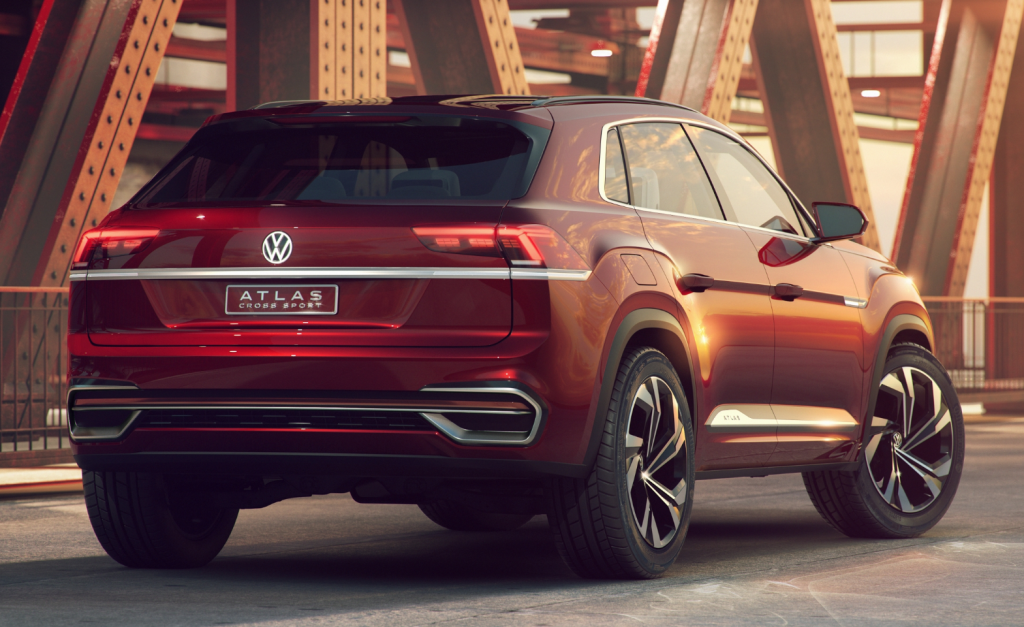 The concept’s powertrain also backs up the high-performance looks—it uses the production Atlas’s 276-hp 3.6-liter V6, but pairs it with a plug-in hybrid system with an 18.0 kWh battery and dual electric motors, for a total output of 355 hp. VW says this powertrain has an all-electric driving range of 26 miles and could enable a 0-60-mph time of 5.4 seconds and a top speed of 130 mph. Five driver-selectable drive modes—E-Mode, Hybrid, GTE (aimed at performance driving), Off-Road, and Battery Hold/Battery Charge—alter powertrain settings for increased flexibility.

Volkswagen also says that the Atlas Cross Sport could be equipped with a mild-hybrid powertrain that uses the same V6 and electric motors, but a smaller 2.0 kWh battery for a total output of 310 horsepower.

While the production 2018 Atlas utilizes an 8-speed conventional automatic transmission, the Atlas Cross Sport Concept has a 6-speed DSG (Direct Shift Gearbox) automated-manual transmission. We’ll have to wait and see what the future holds for the production version of this vehicle—its MQB platform means it could be outfitted with a broad variety of powerplant options.

After an extended period of letting its SUV models wither on the vine with no redesigned models or significant updates, Volkswagen appears to be making up for lost time. The “large midsize” Atlas and a completely redesigned Tiguan both launched last year, and the previously announced pure-electric I.D. CROZZ is scheduled to debut as a 2020 model. The Atlas Cross Sport looks great to our eyes—retaining the extra-wide track of the Altas while significantly shortening the overall length and adding a much lower, fastback-esque roofline makes for an especially aggressive, muscular look—and we’d wager that visual impact will remain even after the show-car elements of this concept are toned down or removed for the forthcoming production version. We are especially curious to see what form the production Atlas Cross Sport’s powertrains will take… will this concept’s gutsy plug-in-hybrid setup make it to the showroom floor? However it turns out, the Atlas Cross Sport should slot in very nicely between the Tiguan and Atlas in VW’s crossover lineup.