The debut of the 2014 Kia Forte Koup in New York marks the final new model in this compact car’s stable. Kia has performed a gradual rollout of the 2014 Forte, starting with the sedan’s launch at the 2012 Los Angeles Auto Show and following with the 5-door hatchback at the 2013 Chicago Auto Show.

Per brand convention, the Forte Koup returns in base EX and sporty SX trim levels. Standard on the former is a 173-horsepower 2.0-liter 4-cylinder engine paired with a 6-speed automatic transmission. The SX includes a 201-horsepower 1.6-liter turbocharged 4-cylinder borrowed from the Veloster Turbo produced by Kia’s corporate parent, Hyundai. SX buyers will have the choice of a 6-speed manual or 6-speed automatic transmission.

The 2014 Kia Forte Koup is scheduled to go on sale in the fourth quarter of this year.

The 2014 Kia Optima gets slightly freshened exterior styling, a more thoroughly updated interior, and new features. Changes to the front and rear fascias are rather subtle. Drivers are more apt to notice the interior revisions. The central dashboard touchscreen that governs navigation and audio functions gets a high-resolution upgrade. It also incorporates Kia’s new UVO eServices infotainment system. The instrument cluster sees the addition of a 4.3-inch LCD display.

Trim levels remain largely unchanged, ranging from base LX through volume EX, and sporty SX. Also returning are the high-line SX Limited and gas/electric Hybrid. The LX and EX reprise a 200-horsepower 2.4-liter 4-cylinder engine. For 2014, this engine will be newly standard on the SX. The new SX-T trim will continue to offer a 274-horsepower turbocharged 2.0-liter 4-cylinder engine. Hybrids will pair a 2.4-liter gasoline engine with an electric motor to produce a combined 199 horsepower. All 2014 Optimas will have a standard 6-speed automatic transmission.

Feature availability remains largely intact and will include items such as a navigation system, heated and cooled front seats, and heated rear seats. Blind-spot alert with rear cross-traffic alert is a new safety option.

The 2014 Kia Optima goes on sale in the third quarter of this year.

The final New York reveal is a redesigned version of what is arguably Kia’s most iconic vehicle, the subcompact Soul. Despite receiving a fairly substantial freshening for the 2012 model year, the 2014 Soul sees even more radical styling changes and a host of new features.

Longer and wider than the outgoing car, the shape is still unmistakably a Soul, with the boxy greenhouse and vertical taillights. The styling update will allow the car to offer its first panoramic glass sunroof.

The chassis is completely new and, according to Kia, nearly 30 percent more rigid. Changes to the suspension and steering promise a more engaging driving experience.

Power comes from either a 130-hosepower 1.6-liter or 164-horsepower 2.0-liter 4-cylinder engine. Transmission choices include a 6-speed manual or 6-speed automatic, depending on trim level selection.

Said trim levels will include Base, Plus, and Exclaim. Standard features include Bluetooth and a tilt/telescopic steering wheel. Plus versions get specific exterior styling cues, a rearview camera, and Kia’s UVO with eServices.

Standard on the Exclaim and optional on the Plus are leather upholstery, heated and ventilated front seats, heated rear seats, and a power driver seat.

The 2014 Kia Soul is slated to reach dealerships in the third quarter of this year.

CG Says: What started as an upstart company selling cheap, South Korean-built cars has accelerated into the American automotive mainstream. The 2014 Optima is a refinement of an already outstanding design, and the new Forte Koup looks much, much better than the outgoing car. The Soul is as funky as ever and should continue to be a hit for the brand. If these vehicles drive as well as they look, and Kia can hold the line on pricing, there is no doubt it will continue on its torrid sales pace. 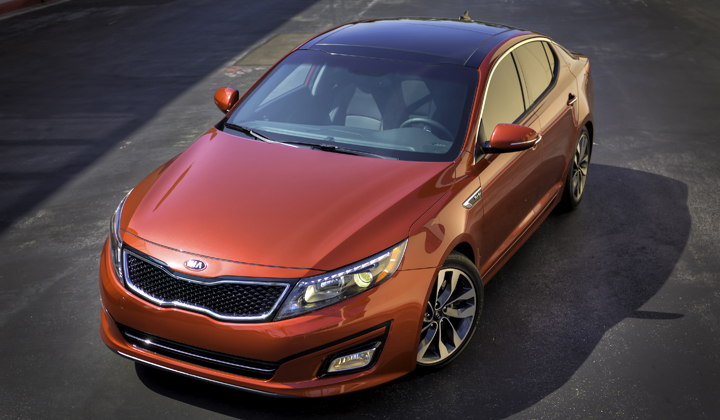 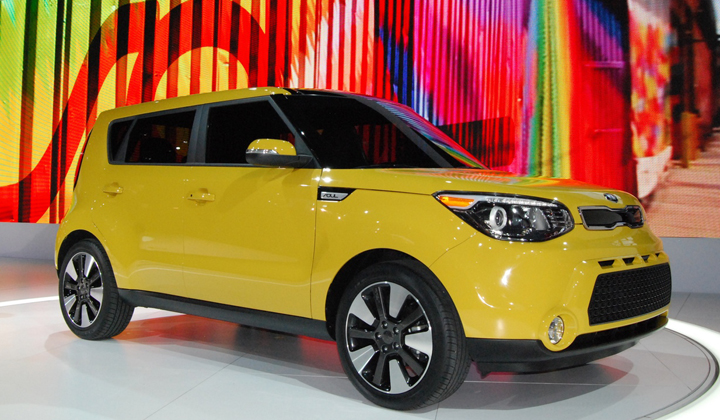