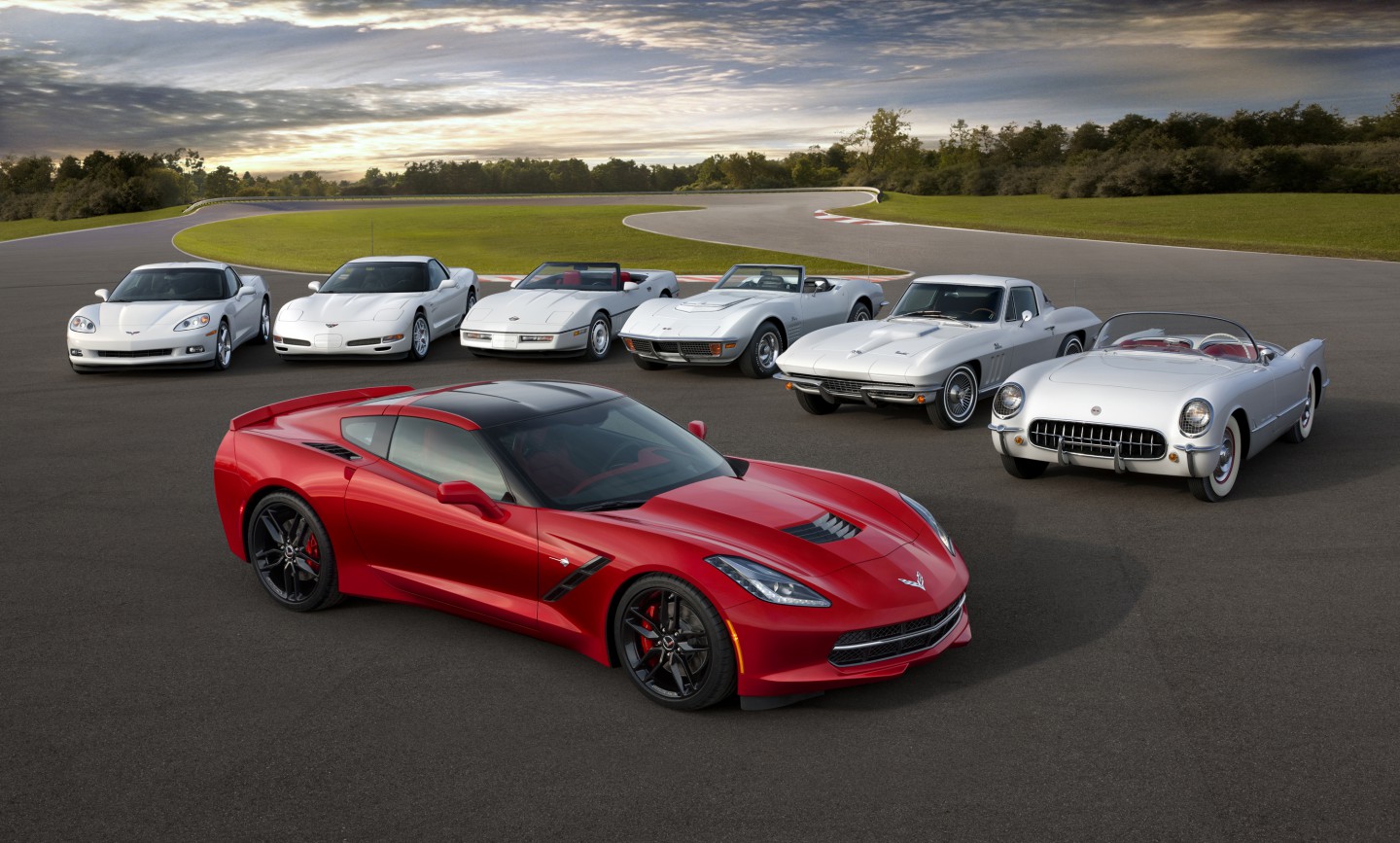 Since the 2014 edition of the Chevrolet Corvette marks only the seventh redesign in the car’s 61-year history, it isn’t often that “America’s Only Sports Car” gets a major overhaul. As such, its designers not only have to make up ground lost to newer competitors, but vault the car far enough ahead that it won’t be terribly outdated before its next redesign – which, if history is any indication, is probably another ten years away.

A decade is nearly an eternity in car years nowadays, as technology is advancing at a stunning rate. But Chevrolet seems confident that the new Corvette can hold its own in its market, and that the car is far enough advanced that it raises the bar competitors will have to clear for years to come. So convinced are they, in fact, that they graced the car with a hallowed name from Corvette’s glory years: The new 2014 model is called, correctly, the Corvette Stingray.

For those who don’t know, “Sting Ray” (two words) was first applied to the Corvette’s radical 1963 redesign that introduced what is today referred to as the “C2” generation. It marked the first redesign of the Corvette since the car’s 1953 introduction, and although it ended up being the shortest of all the design generations (running only through 1967), it contained what are today some of the most coveted of cars – of any type. Although the sub-name carried into the C3 generation that began with the 1968 “shark,” it was now spelled as one word: Stingray. The name was dropped after 1976 – a time during which the Corvette didn’t have nearly the sting it used to. Chevrolet claims it was waiting to revive the moniker until it had a Corvette that was once again worthy of the name. 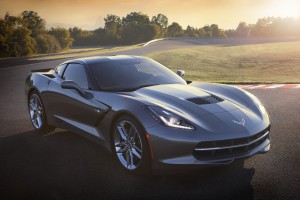 Despite added equipment, the ’14 ‘Vette is little heavier than the 2013

So Chevrolet feels that the new C7 is just such a car. But is it? Is it really the leap forward that warrants the return of the Stingray name?

Based on our brief exposure to pre-production versions at a recent press preview, we’d give it a resounding, “sort of.” But our reservations are based only on the fact that the C6 generation was still a compelling car, particularly from a “performance per dollar” standpoint. Which only served to set the aforementioned bar that much higher for the C7.

Yet almost without question, the C7 is at least a bit better than the C6 in virtually every respect. It has more standard horsepower and gains only a little weight, so the power-to-weight ratio is better. A more sophisticated suspension results in a ride/handling balance that is at least a bit better. And a host of new features brings a driving experience that is – depending on your “sports-car” philosophy – noticeably better.

To the first point: 35 more horsepower contributes to what Chevrolet says is a 0-60 time of an impressive 3.8 seconds with the performance-oriented Z51 package and performance exhaust system. And nothing during our test drive made us question that claim. The new-generation “small block” LT1 V8 makes power everywhere in the rev range, and unlike some smaller turbocharged engines, makes it instantly available; it’s truly satisfying to put your foot down and have something happen right now. Furthermore, the V8’s combination of direct injection, variable valve timing, and GM’s Active Fuel Management (“cylinder deactivation” to the rest of us) results in an EPA estimate of 17 mpg city/29 mpg highway – equally impressive. For those into power statistics, the engine with the optional performance exhaust system makes 460 horsepower and 465 lb-ft of torque (455/460 in base trim), up from the C6’s standard 430/424. Due to an all-new aluminum chassis and numerous carbon-fiber components (including the hood and the coupe’s lift-off targa top), base curb weight checks in at 3298 lbs vs. 3225 for the C6, despite numerous added features.

Although the previous Corvette enjoyed a good ride/handling balance, the new one is probably even better. We say “probably,” because the only models tested were equipped with the Z51 Performance Package, which includes a slightly stiffer suspension and larger wheels shod with lower-profile tires, both of which aid handling at the expense of ride. Handling seemed virtually faultless, even in bumpy corners (usually a real challenge with unforgiving sport suspensions), while being stiff but perfectly livable over rough pavement. Corvettes are available with a five-position Driver Mode Selector that includes settings for Weather (slick surfaces), Eco (fuel economy), Tour (most road use), Sport (sporty road use), and Track (self-explanatory). These positions adjust a dozen different settings, from throttle and steering feel, to suspension firmness, to what gauges are displayed on the “virtual” instrument cluster. The last, in particular, is one of the new-fangled “high tech” features of the Corvette that some sports-car purists may frown upon, as many prefer good ol’ fashioned, round, analog gauges.

But a bare-bones sports car is not the current Corvette’s mission. According to product manager Harlan Charles, “The all-new Corvette Stingray is really three cars in one: It provides the comfort and functionality of a long-distance GT car, the connectedness and infotainment of a daily driver and the acceleration, grip and braking of a capable track car.”

Nowhere is that philosophy more evident than in the Corvette’s interior. Virtually every surface is covered with leather, aluminum, carbon fiber, or faux suede, providing a decidedly upscale ambiance. While not all of the leather-covered surfaces are padded, most that you’d touch are. Audio, climate, and infotainment functions are nearly all controlled by virtual buttons on the eight-inch center dashboard screen or by a couple rows of physical buttons. None manage to duplicate the ease and clarity of more traditional knobs, but they look more modern and follow the current trend in control interfaces. 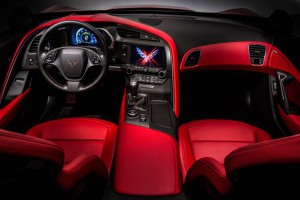 The instrument panel in front of the driver features another eight-inch screen that’s configurable with various layouts. One features a large, round, analog tachometer in the center (“virtual,” of course), with a choice of ancillary gauges and readouts. Track mode changes that to a race-oriented linear tachometer with minimal ancillary readouts. Most people should be able to find a satisfactory arrangement, unless, of course, they’re wanting a set of round mechanical gauges from the ‘70s.

About the only negatives evident in the new car are limited rearward visibility and limited interior storage space. The former is the result of the swooping roofline, but the effects are minimized by small rear-quarter windows and a rear backup camera. Cabin storage is provided by a small glovebox, shallow console box, and the usual twin console cupholders and door map pockets. On the positive side, the rear cargo area is reasonably large, and it can hold the coupe’s traditional lift-off targa roof (which is carbon fiber and thus lighter than before), while still leaving space for some soft (or flat) luggage underneath.

At the tail end of the C6 generation, the entry-level price of a Corvette topped $50,000 for the first time. Yet despite all its added features and technology, the 2014 C7 only barely ups the ante. Base price of the coupe, which is due to go on sale this fall, is $51,995 including destination. Due late in 2013 is the convertible version, which starts at $56,995. Considering the performance and features offered, both figures seem almost a bargain in today’s light – yet another way in which the new C7 recalls Corvettes of the past. 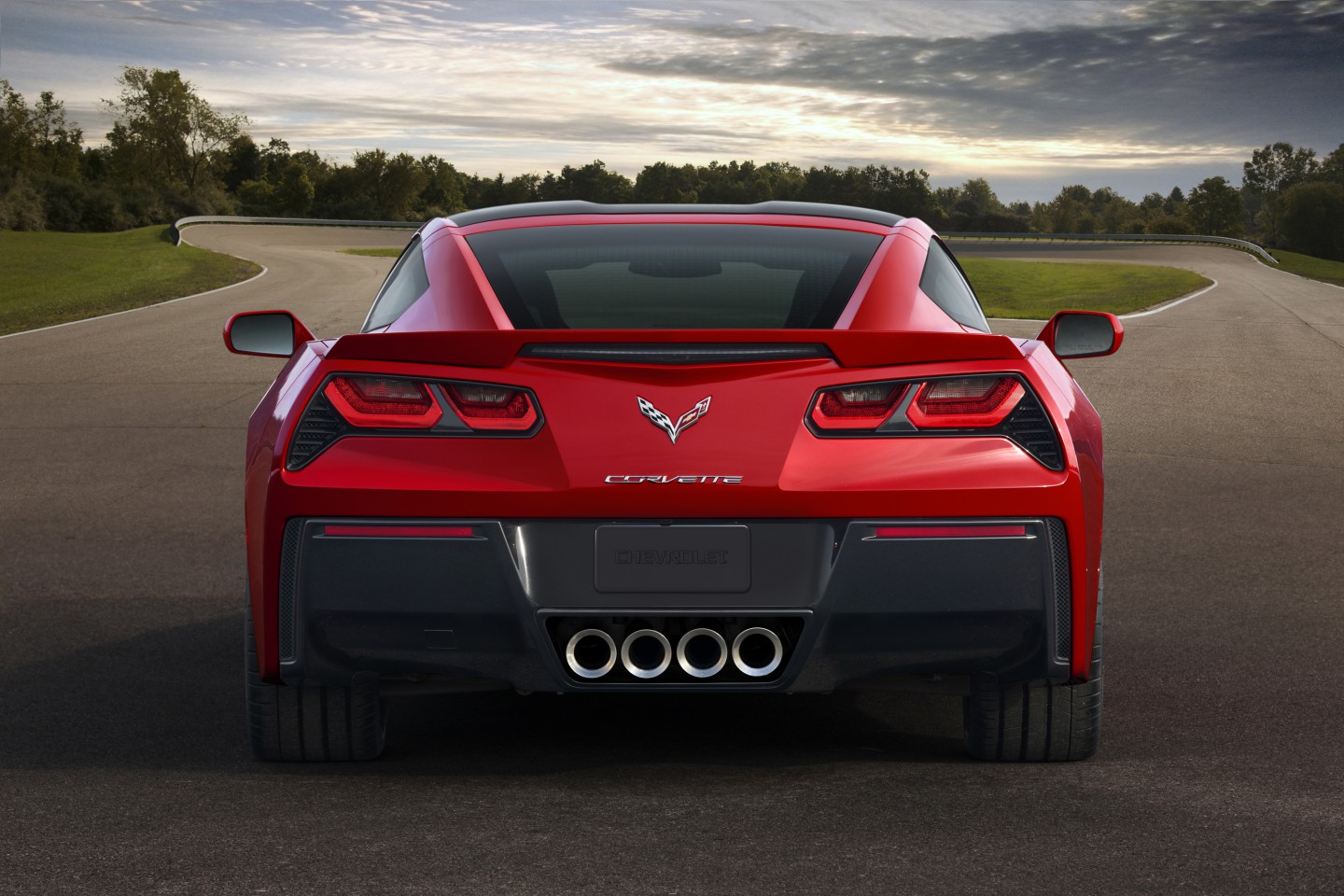