What Would Mario Drive? (And Other Nintendo Characters) 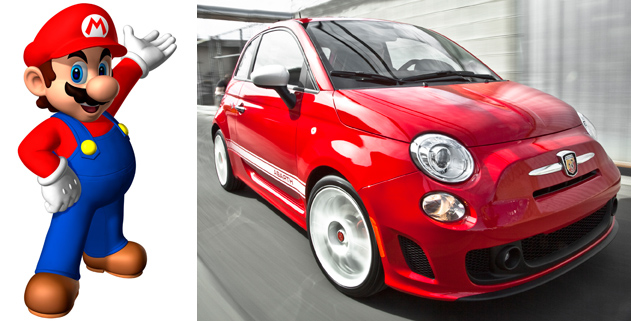 “So long-ee, Bowser! My Fiat has da turbo power!”

Inspired by esteemed Consumer Guide Publisher Tom Appel’s entries about what cars Star Trek characters would drive, I figured I would take my own passion for video games and do something similar.

My plan is to split this among the major video game companies: Nintendo, Microsoft, and Sony. Today we start with “The Big N,” one of the granddaddies of the business. I’ll largely keep within the same framework as the Star Trek entries. Production vehicles only, but I would like to keep the costs to less than $100,000.

Mario
Though I didn’t grow up on Mario (ours was a Commodore 64 household), I’ve spent plenty of time with this iconic Italian plumber since his title debut on the original Nintendo Entertainment System. When he’s not flying off to the Mushroom Kingdom to save Princess Peach from the evil Bowser (and company), I envision Mario nipping around the tightly packed streets of Turin. What better car for him to do that in than a Fiat 500 Abarth? Its raw exhaust note will draw the attention of every Goomba (the enemy mushrooms) in the area, and its zippy acceleration will easily get him away from danger.

What Would Horstachio Drive? (And Other Xbox Characters)

Link
The hero of the Legend of Zelda franchise has been on more than a dozen adventures spanning seven generations of video game consoles and handheld devices. Whenever the evil Ganon rears his ugly head in the land of Hyrule, Link will be there to save the day. It takes a lot of gear to defeat evil: bombs, rope, grappling hook, crossbow, boots . . . you get the idea. For the many expeditions Link undertakes, a Ford Expedition would be an ideal choice. There’s plenty of cargo space for all the tools of his trade, plus more than enough capacity to pull a horse trailer so that he can bring his loyal companion, Epona.

Link doesn’t need a Lincoln. He’ll save the day in a Ford Expedition.

Samus Aran
The lead character of Nintendo’s Metroid franchise is a strong, independent woman (the disaster known as Metroid: Other M is non-canon as far as I’m concerned). With styling reminiscent of her body armor’s ball form and with the power and capability to match, the Audi TT RS would make for fine transportation. With the franchise now on indefinite hiatus, Samus can use the RS’s 360-horsepower 5-cylinder engine and sticky quattro all-wheel drive to raise hell on worlds unknown.

Samus Aran is roundy in all the right places—just like the Audi TT RS.