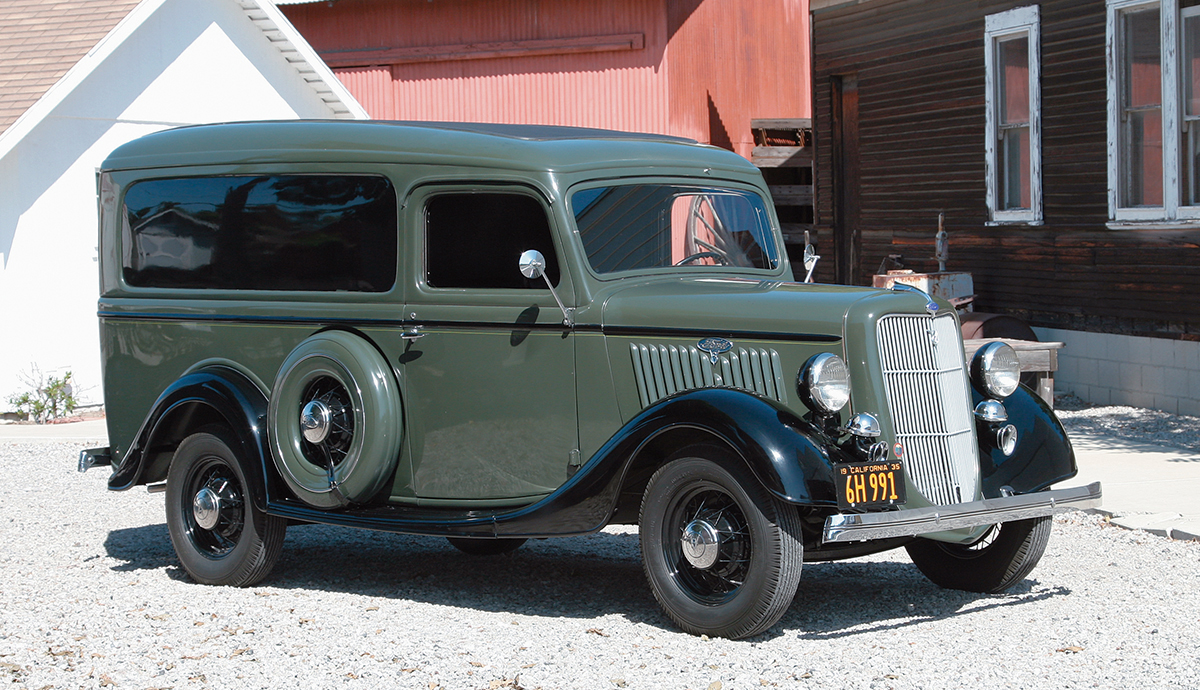 Note: The following story was excerpted from the April 2009 issue of Collectible Automobile magazine

The Ford Motor Company ambitiously introduced restyled lines of cars and trucks for 1935. The truck line was comprised of the light-duty Model 50 Commercial Cars and the 1½-ton Model 51. For the first time, Ford truck styling was starting to show the streamlined look the company’s passenger cars had been using since 1933. While the trucks clearly looked more modern, Ford’s recent practice of greater stylistic differentiation between car and truck models continued.

Up front, the vee-shaped grille was slanted back at the top, and the headlamps were now mounted on fender-mounted stands rather than on a spreader bar. To help foster a sense of motion, the louvers in the hood sides newly slanted back toward  the cowl and there was some rake to the cab A-pillars and windshield. Fenders used a semi-skirted design.

The revised styling can also be credited in part to the fact that Ford’s passenger cars had a new chassis for 1935. The wheelbase was unchanged at 112 inches, but the redesigned unit allowed the engine to be moved 8.5 inches forward. In turn, this opened up the possibility for the company’s traditional transverse front spring to be mounted in front of the axle rather than over it. 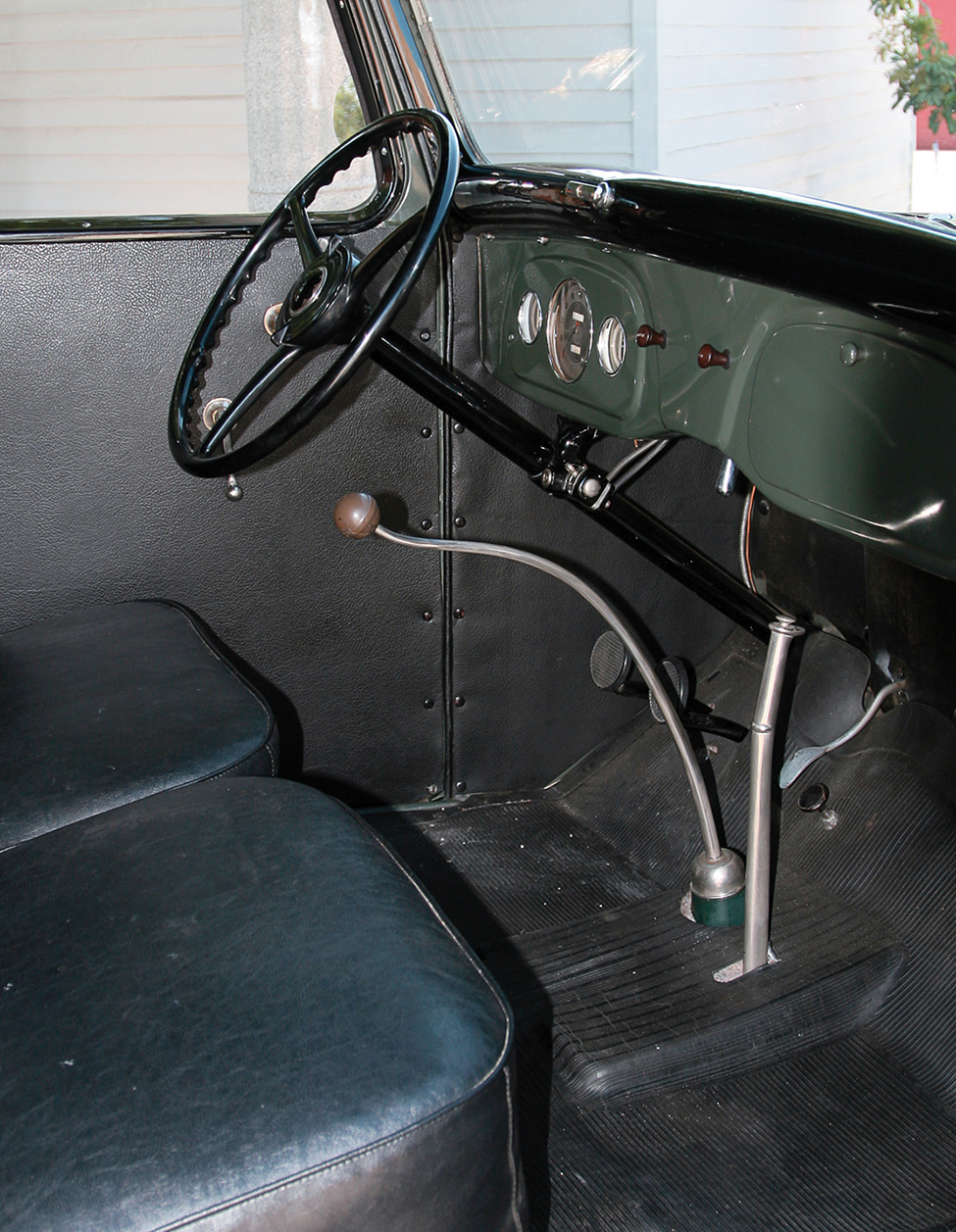 For passenger cars, these changes allowed the seats to be moved forward as well, so rear-seat passengers rode ahead of the rear axle, rather than above it. The main benefits of this change were a better ride and the possibility for a wider rear seat.

Since the passenger-car chassis was the basis for the light-duty truck unit, these changes carried over to the Commercial Cars as well. The change in proportions was also of great benefit for the truck line, but for different reasons. The new cabs were now mounted further forward, which allowed cargo to be distributed more evenly between the front and rear axles. It also allowed for shorter overall lengths and rear overhangs with no loss of cargo capacity. 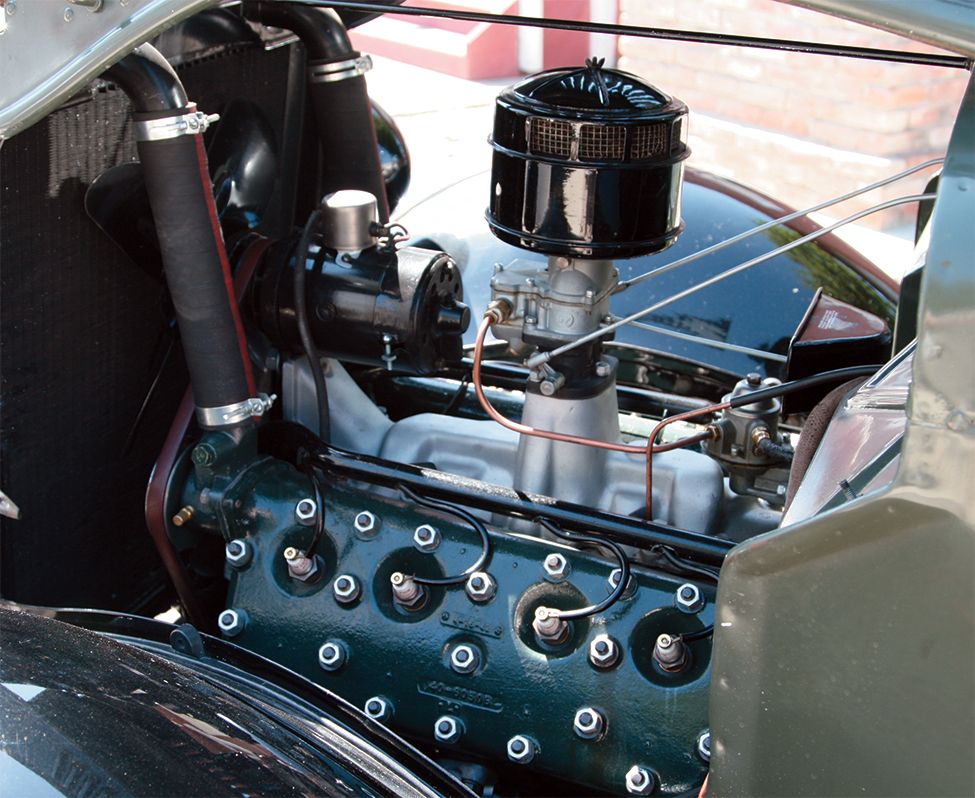 The chassis also received a new steering system that used a transversely mounted linkage and improved mechanical brakes. Diameter of the steel-spoke wheels was reduced to 16 inches from 17. Bodyside mounting of the optional spare tire was new. 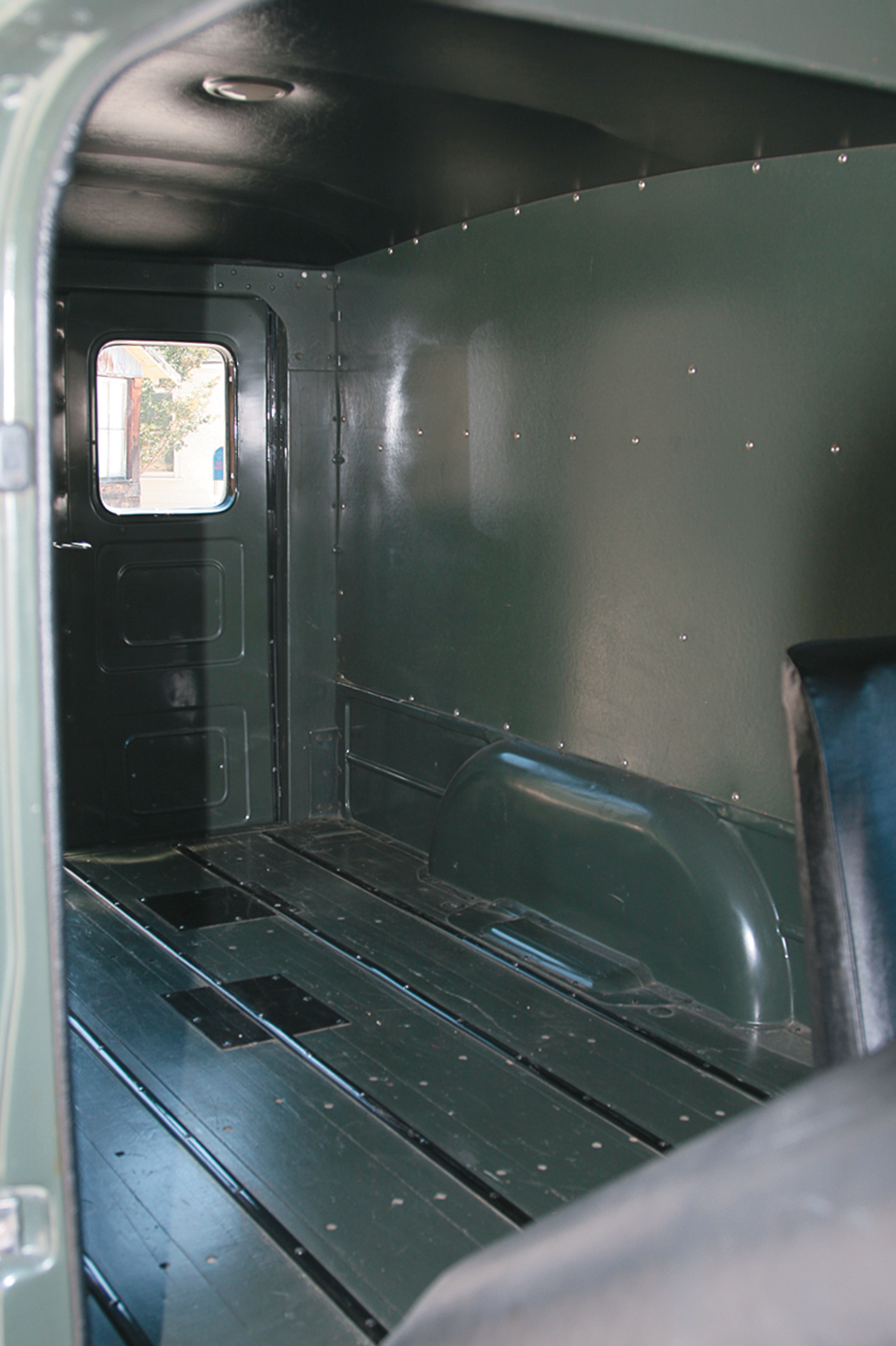 Panel delivery buyers who spent the additional $15 for the DeLuxe model received extras including a lined interior, twin horns, aluminum-color paint on the grille, and chrome trim on the rearview mirror, horns, and windshield wiper. A couple of sources indicate orders for the DeLuxe panel came to 4946 units. 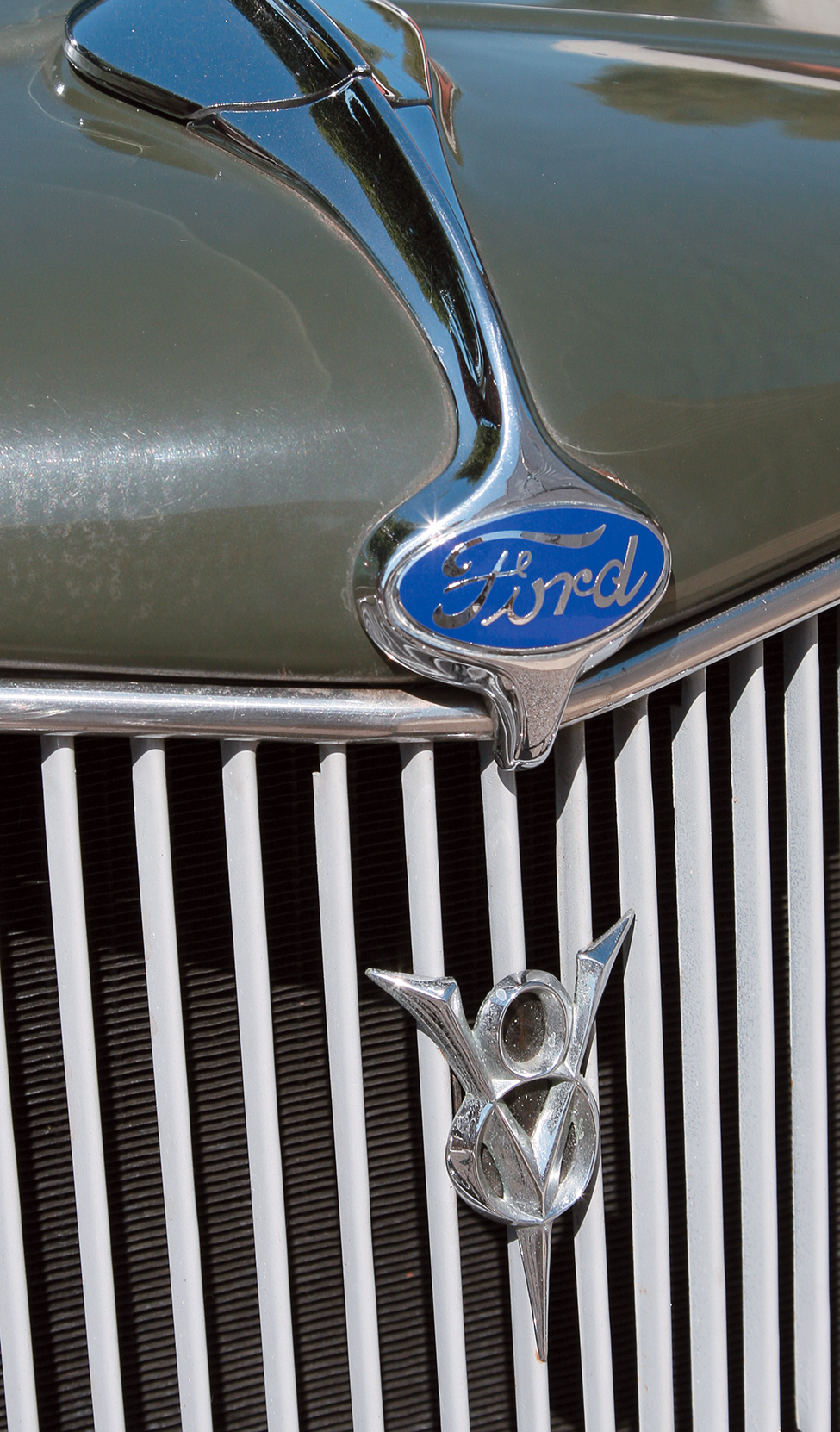 Like Ford’s stable of 1935 cars, the new truck lineup was able to reclaim the best-seller title from Chevrolet. Chevy had held the car crown since 1930 and the truck mark since 1933.

This model 50-820 DeLuxe panel delivery has been owned by John Perrot of Garden Grove, California, since 1962. He reports that his truck underwent an off-frame restoration that was completed in 1975. Since its rejuvenation, the Vineyard Green truck has twice won the Dearborn Award, the Early Ford V8 Club of America’s highest honor for a restored entry. 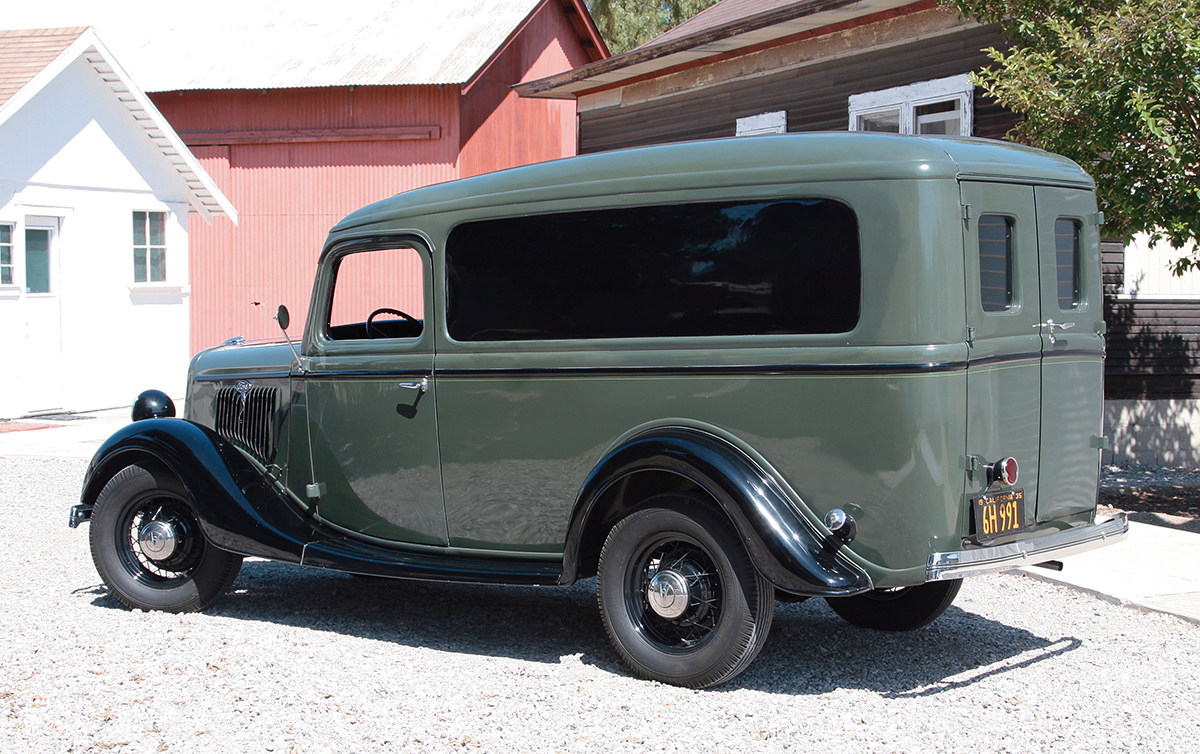 Give the gift of Collectible Automobile magazine