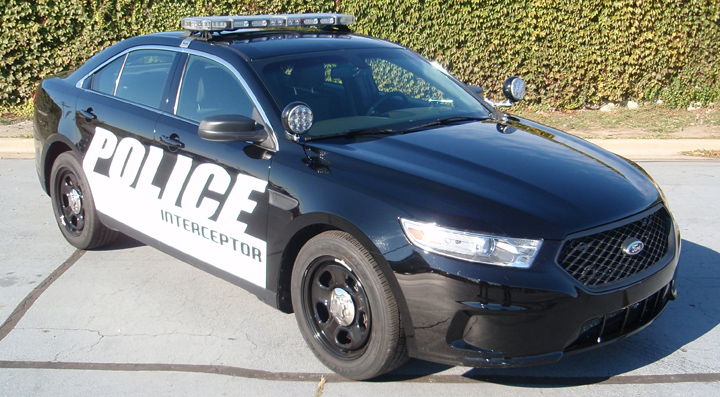 So, we’ve checked out the Dodge Charger and Chevrolet Caprice PPV cop cars. . . . Now we round out our series of Johnny Law walk-arounds with a look at Ford’s police car. Actually, police car and police SUV. Ford offers both a Police Interceptor Sedan (based on the Ford Taurus) and a Police Interceptor Utility (based on the Ford Explorer, which was redesigned for 2011 on a platform shared with the Taurus).

Unlike the Charger, Caprice PPV, and the discontinued Ford Crown Victoria, Ford’s new Police Interceptors are built on a front-wheel-drive platform and are not offered with a V8 engine. However, all-wheel drive is available on both, and the Sedan can be equipped with Ford’s 365-horsepower 3.5-liter EcoBoost turbocharged V6. That horsepower rating puts it right in the running with the Charger’s 370-hp Hemi and the Caprice PPV’s 355-hp 6.0-liter V8. The Police Interceptor Sedan is also available with a 288-hp 3.5-liter V6 and a 305-hp 3.7 V6; the Utility offers only the 3.7 V6.

Most police departments have traditionally favored rear-wheel drive, but Ford representatives are confident that the AWD capabilities of their vehicles will win over converts. And, for police departments that have a need for both traditional 4-door sedans and SUVs, the Ford Police Interceptors share many parts and “wear-and-tear” components, such as belts and filters. This means easier and more economical servicing and repairs.

We recently had the chance to check out the Police Interceptor Sedan and Utility and take both of them on a quick spin through an autocross-style handling course that was set up in a parking lot of Chicago’s U.S. Cellular Field. (The location was fitting, since both the Sedan and Utility, like all other Tauruses and Explorers, are built in Ford’s Chicago Assembly plant.). Both vehicles handled the tight corners and braking exercises of the driving course with aplomb, considering their size and heft. Let’s take a quick walk-around: 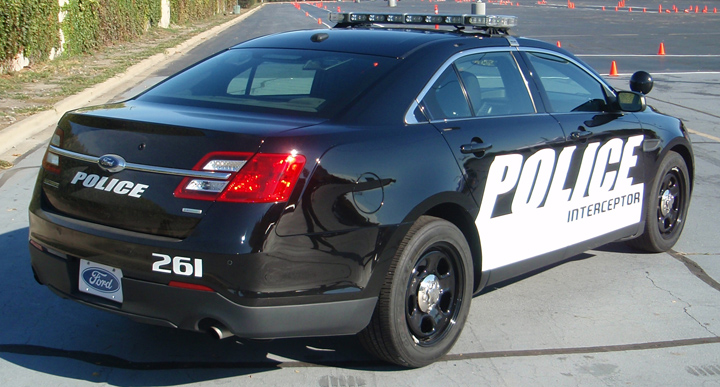 Though they’re hard to see in this photo, the Interceptor Sedan has auxiliary red and blue LED flashers mounted at the top of the rear window, flanking the center brake light. 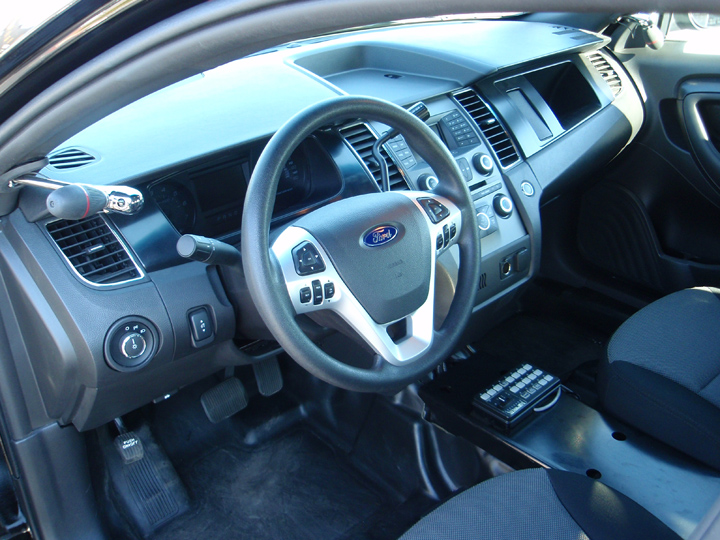 Tip-offs that this is no civilian Taurus interior include the column-mounted shift lever, spotlight handles, passenger-side storage bin, center console, and rubberized floor. The console is designed to accept equipment from decommissioned Crown Victoria Police Interceptor vehicles, so municipalities don’t have to spring for new gear. 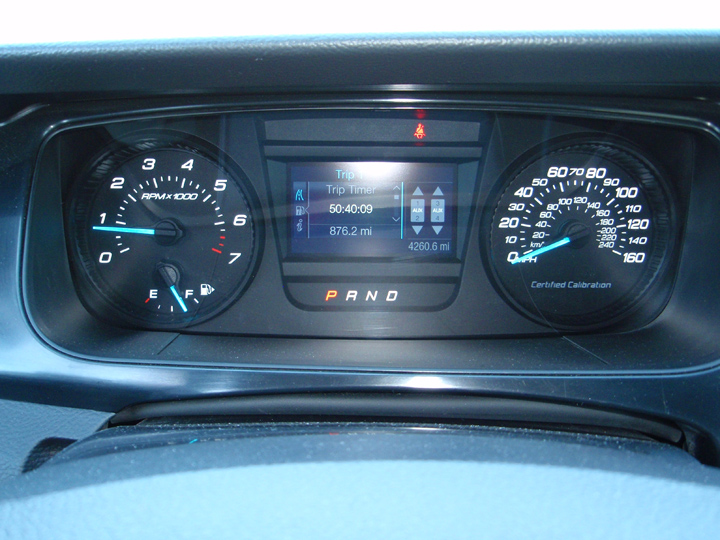 A close-up of the Sedan’s gauge cluster; note the 160-mph certified speedometer. 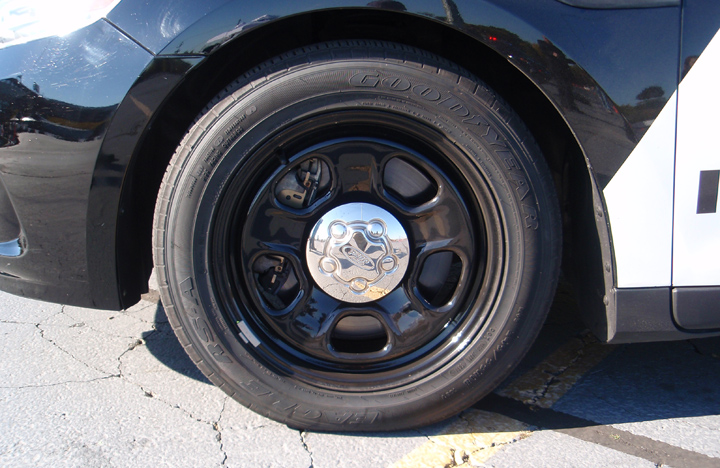 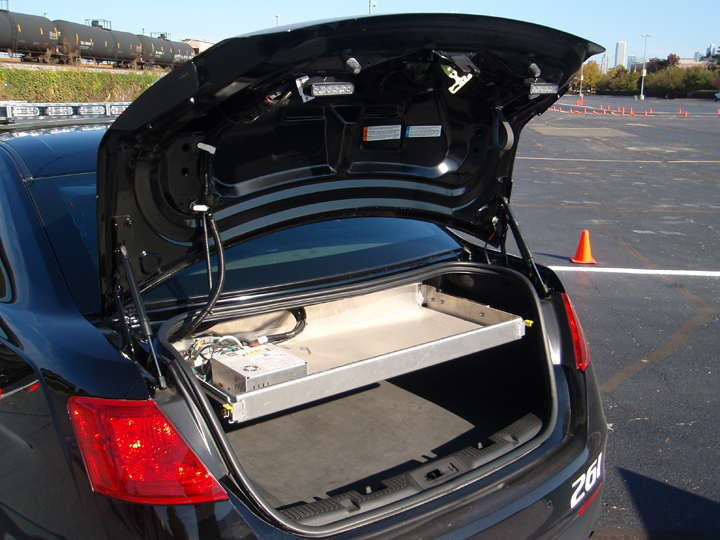 The trunk can be equipped with a slide-out tray for electronic-equipment storage, as shown here. Note the rear-facing LED flasher lights on the underside of the trunk lid. 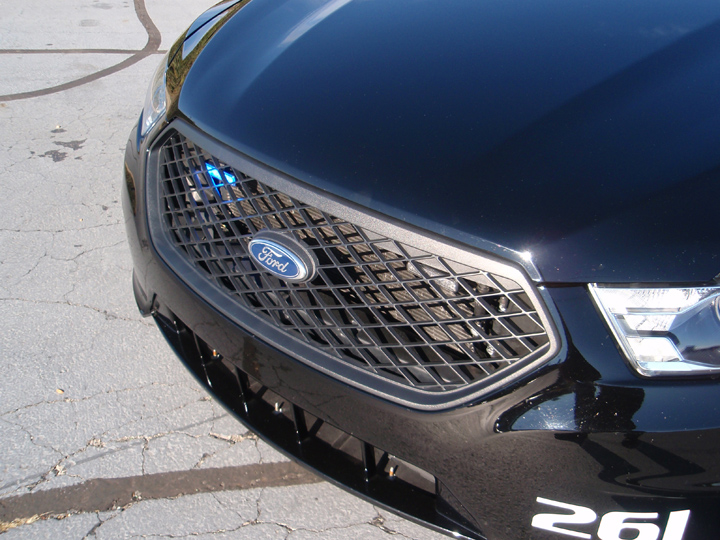 The Sedan’s blacked-out grille is designed for improved cooling over the “civilian” Taurus.

The front doors have supplemental tether straps that help protect the hinge’s integrity when the door is flung open forcefully. Occasionally, officers will kick their door open when they need to make a fast exit from the vehicle. The front doors can also be equipped with a ballistics panel to provide the officer with extra protection if he or she is being shot at.

No fancy electronic key fobs or keyless access here; the Ford Police Interceptors use a simple, old-fashioned key for door and trunk access as well as starting. It’s a bit less convenient than the typical civilian vehicle, but the “old-school” key offers greater security as well as lower costs for duplicates or replacements. 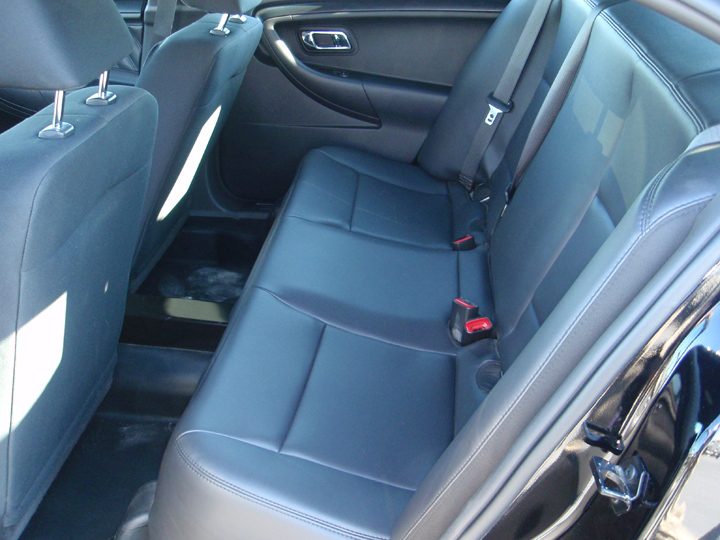 The Sedan’s rear seats are upholstered in heavy-duty vinyl, and the revised door panels delete cupholders and map pockets for easier cleaning. Eww. 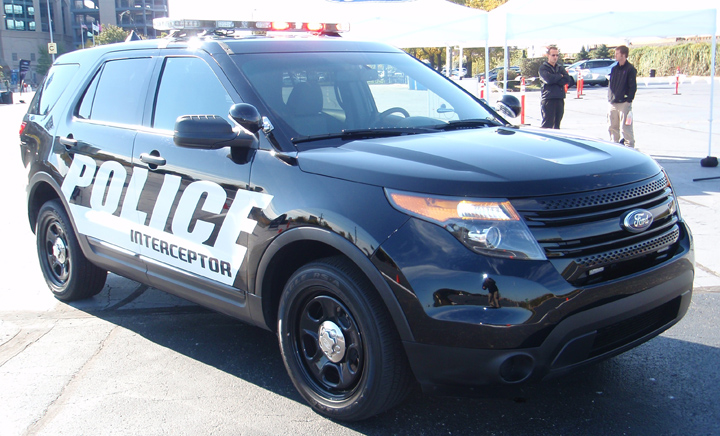 The Police Interceptor Utility has the same all-business look as the sedan. 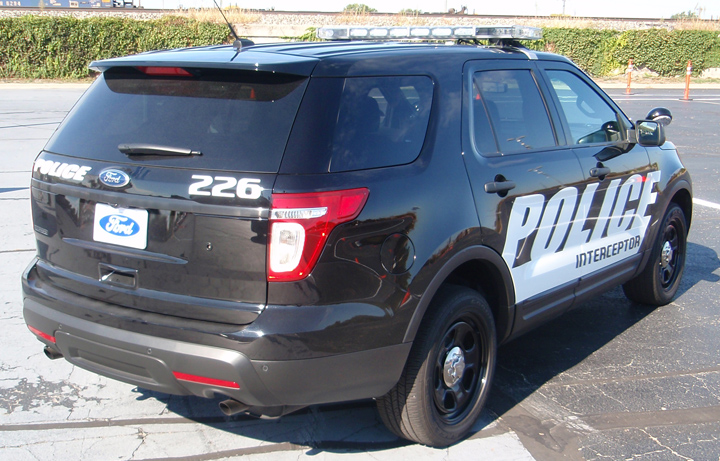 Like the Sedan, the Utility has auxiliary LED flashers mounted on either side of the center rear brake light. High-intensity strobe flashers are seamlessly integrated into the backup-light area of the taillights. 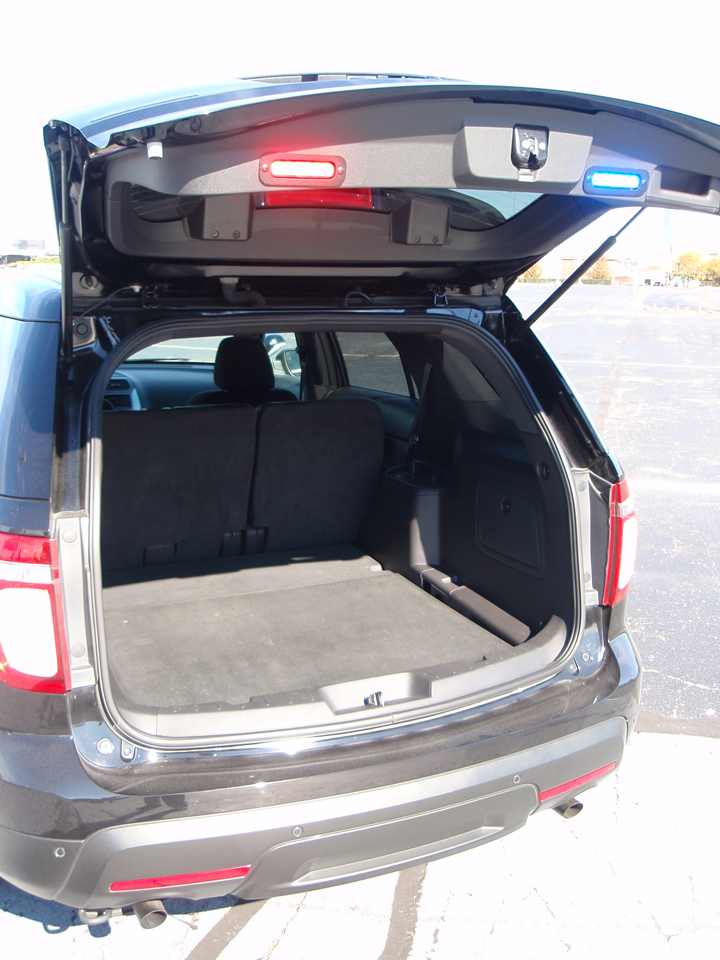 The Utility’s rear cargo area offers plenty of storage space. LED flashers are built into the lower edge of the liftgate. 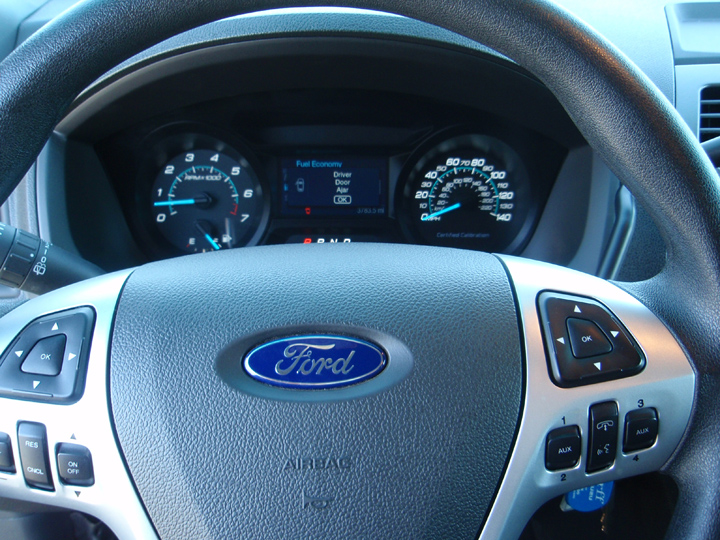 A close-up of the Utility’s steering wheel. On both the Sedan and Utility, the steering-wheel stereo buttons are repurposed for auxiliary-equipment control. They can be programmed to operate specialized gear, such as lights, sirens, PA speakers, or canine door releases.