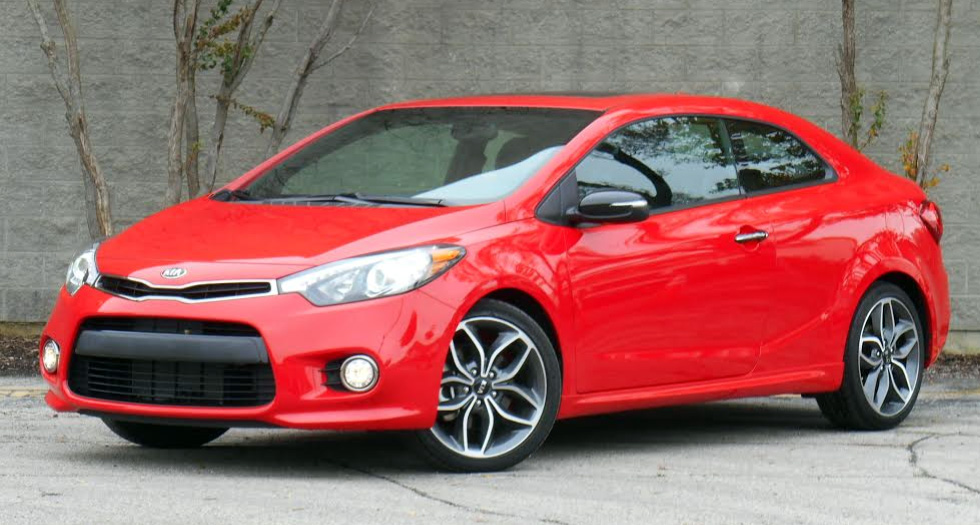 Consumer Guide’s test Forte Koup arrived in SX trim with a manual transmission and plenty of options. All in, including destination charge, our test car came to $25,285.

The great: Quick, fun to drive

The not so good: Middling fuel economy

It won’t win any spelling bees, but the Kia Forte Koup provides a pleasing, useful compact for those who prefer the sporty image of a 2-door car.

Four-door sedans and hatchbacks predominate in this segment; indeed, Kia has Fortes in both those body styles. The Koup’s most direct competitors are the 2-door Honda Civic, Hyundai Elantra, and Scion tC—the last a hatchback that Consumer Guide® categorizes as a sporty/performance car. 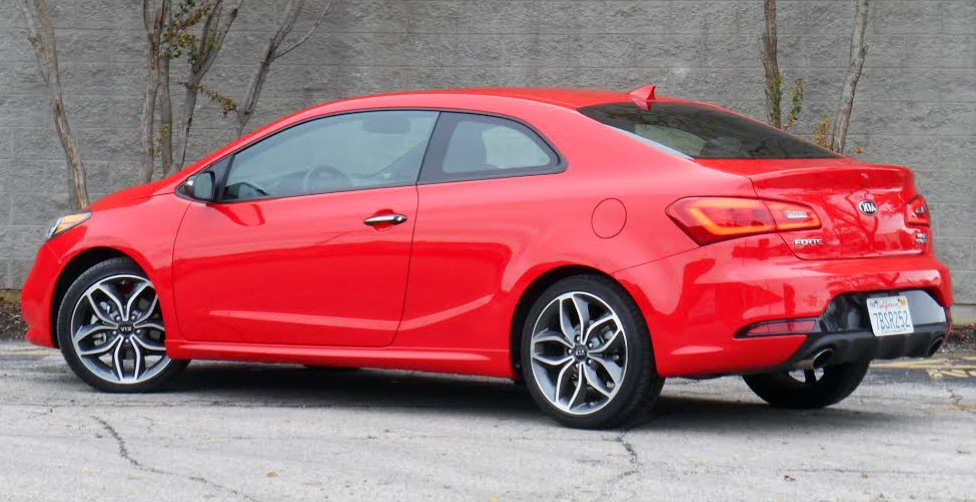 Kia Forte is among a small group of affordable compact cars available as both a sedan and coupe. Other models include the Honda Civic and Hyundai Elantra.

The Forte Koup was redesigned for 2014 on the same longer, lower, and wider platform used by its sedan and hatchback siblings. However, the Koup and the hatchback have frontal styling that is different from that of the sedan, a different mix of engines, and a sporty trim level not currently available on the sedan.

CG tested the “sportier” top-line SX, which comes with a 201-horsepower turbocharged 1.6-liter 4-cylinder engine and the choice of a 6-speed manual or 6-speed automatic transmission. (The base EX has a 173-horsepower 2.0-liter naturally aspirated four.) Like a number of the small turbo fours this driver has sampled this year, the Forte Koup’s powerplant does a good job of handling the “turbo lag” that seemed to be a hallmark of that type of induction. While this Kia is not exactly a “bomb,” it accelerates from a stop in a lively and linear fashion, and maintains torque well enough to spare drivers of manual-shift cars from repetitive-motion injuries from frequent downshifting. The 6-speed stickshift in our test car was fairly direct; precise enough; and paired with a balanced, easy-to-modulate clutch that made the car a cinch to drive in traffic and added to its fun-to-drive quotient. 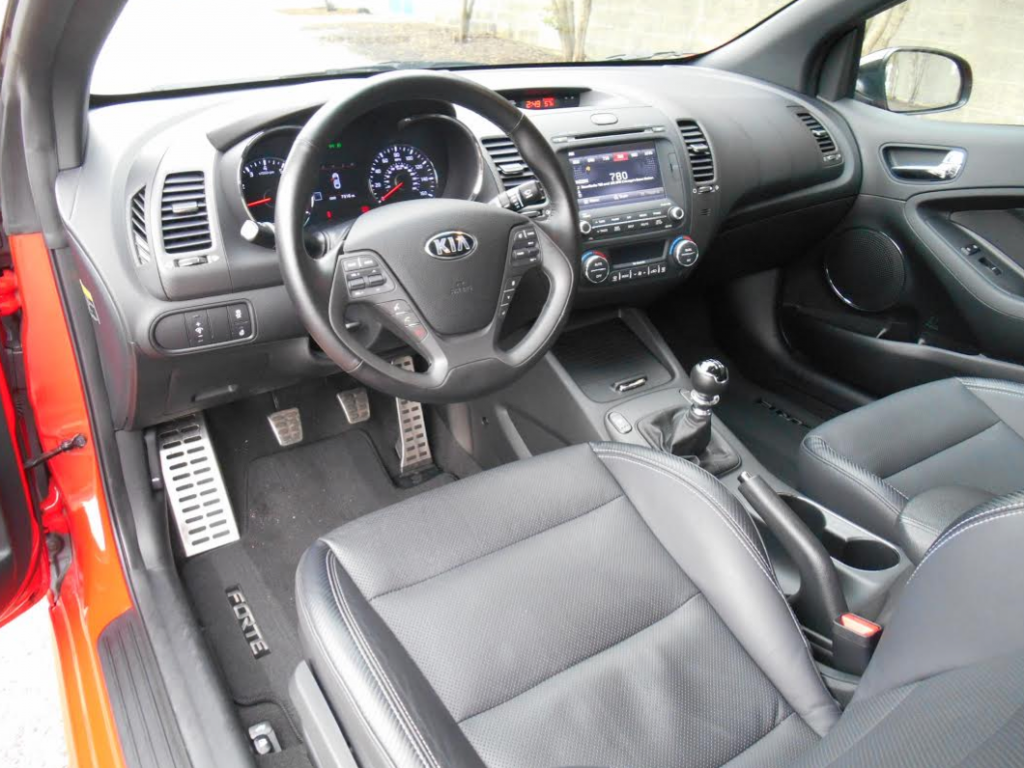 Forte Koup’s cabin is lined with good-quality materials and offers plenty of leg and headroom–and some fancy pedals.

In this driver’s experience, gas mileage was about on the nose of the official EPA figures of 22 mpg city/29 mpg highway/25 mpg combined. In a trip of 158.6 miles, 70 percent under city driving conditions, I averaged 23.97 mpg.

Other SX-specific touches include 18-inch wheels (in place of the EX’s 16s), larger front brakes, LED taillights, more-aggressive front and rear fascias, alloy-trimmed pedals, carbon-fiber-look trim pieces inside and out, twin chrome-tipped exhaust outlets, push-button starting, a rearview camera, and Kia’s UVO infotainment and smartphone-app-enabled telematics system. There’s also a “sport-tuned” version of the front-strut/rear-beam suspension. Bump-tuned might be a little more accurate. Pavement imperfections registered with thumps heard and felt that just made the car seem more stiff than sporty. Steering, with the new standard “FlexSteer” feature that allows drivers to adjust steering effort between “Comfort,” “Normal,” and “Sport” settings, was generally responsive with perhaps a little bit of slack on center. Braking was prompt and sure.

Why the Kia Soul is a 2015 Consumer Guide Best Buy 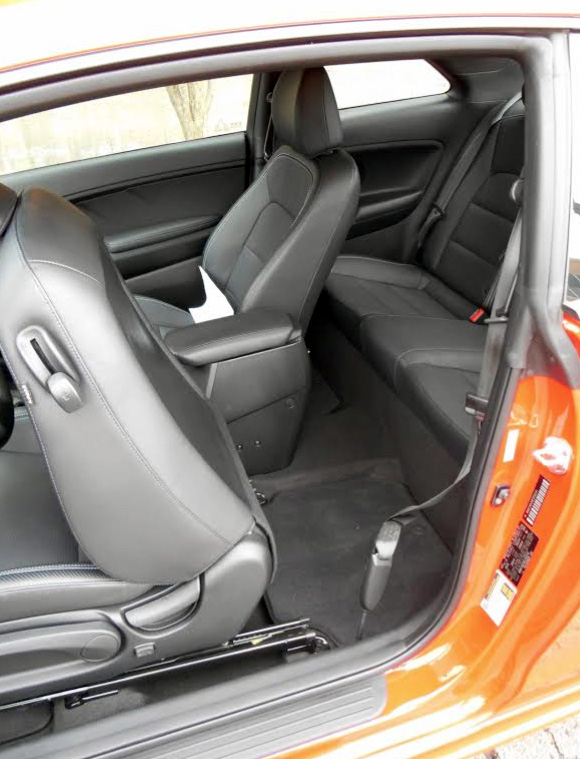 The easy-to-use audio system uses mode-selector buttons and a rotating tuner knob to get where you want to go. A finger press on the touchscreen saves presets. Climate controls are a similarly uncomplicated mix of clearly marked push buttons and twist knobs. Gauges and the TFT display are clear and well-placed. There’s a lot of smooth hard plastic on the instrument panel but it has a faux carbon-fiber look for some visual interest. The hood over the instruments and parts of the interior door panels have a little spongy give to them. Rear passengers find themselves surrounded by grained hard plastic, however. The comfortable black leather seats in our test vehicle were nicely highlighted by white contrast stitching.

Front occupants should find good head and leg room, but the Koup’s pleasant surprise is decent rear-seat space for two adults—and they won’t need to slither and strain to get back there, either. The front seats track forward to permit relatively graceful entry and exit to the back seat. (There’s room across for 3 in back, but the middle position lacks the head room of the outboard seats.) Large-for-a-coupe rear-quarter windows keep backseat passengers from feeling claustrophobic, and add to overall visibility.

The flat-floored trunk is fairly wide and looks like it can hold a lot, though the opening narrows somewhat near the bottom, and liftover is a little high. Rear 60/40-split seats fold for more cargo space, albeit nowhere close to flat, and with a considerable offset from trunk floor to seat back. Interior space for incidentals includes a big glove box, a deep console box under a padded arm rest, a pair of exposed console cup holders, and a covered bin at the front of the console that includes media-device inputs. Door pockets include bottle holders for front passengers, but rear-seaters have to make do with cup holders molded into the sides and a single pouch attached to the back of the front-passenger seat. A pull-down center arm rest in back has a pair of cup holders molded in.

Our test example started at $20,600, which is quite acceptable for a lively performing compact with some upscale standard features, practical passenger and cargo room, and Kia’s generous warranty, all wrapped up in a dash of coupe style. At $25,485 with delivery and lots of options, CG’s sample may have eroded that value proposition somewhat, but there’s plenty here for the prudent—but not dour—shopper to enjoy.

John seemingly liked the Koup, but if anything, I liked it even more. And that came as a bit of a surprise.

A few years back we tested a Kia Forte that had one of the worst manual transmission/clutch combinations in recent memory. This one, by contrast, was among the best. Ditto for the little 1.6-liter turbo engine, which exhibited very little of the dreaded lag that afflicts many of this ilk while providing an impressive – and linear – rush of power. In 85% highway driving, I averaged an even 33 mpg, which isn’t bad (and actually beat the EPA number), though it’s hardly impressive in this day and age. But overall, the powertrain gets a decided “thumbs up.” 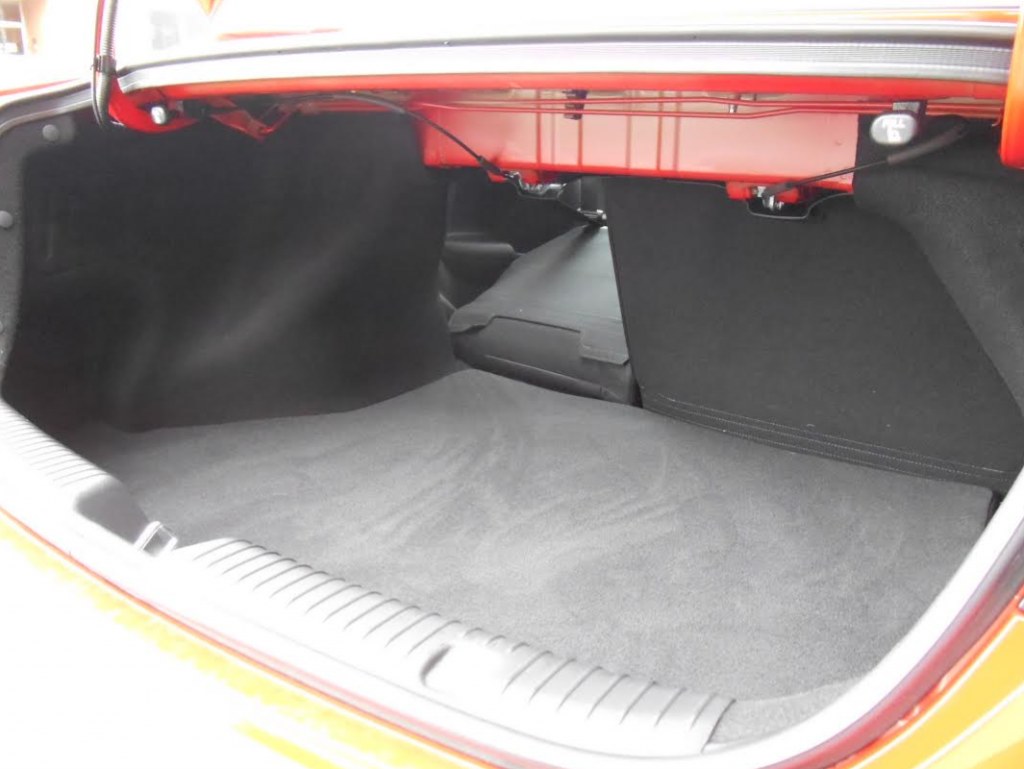 A narrow opening, high liftover, and rear seat backs that don’t fold level with the load floor, somewhat compromise the utility of what is otherwise a usefully large trunk.

Same goes for most other aspects of the Koup. John fussed a bit about the ride, but I have no such complaints – particularly when the sharp steering and agile handling are taken into account. Most impressive here is the car’s frisky turn-in on corners; it wants to dive for the apex rather than heading off into the weeds. Only a few other cars I’ve driven have given that sensation (the Mini Cooper being among them), and it really adds to the Koup’s “fun to drive” quotient.

Something else I enjoyed was the interior ambiance. While the look is hardly ritzy, there’s some padding on the dash and – more importantly to me – on the door tops where my elbow rests. The last is even more valuable thanks to the low door sill and high, commanding driving position, both of which I really appreciate. Less appreciated is that the seat cushion is tilted back too far for me, leaving the front edge cutting into the backs of my knees, but that may only be a “personal problem.” Another surprising nicety is that – with the pull of a lever – the front seats slide far forward to reveal a sizeable opening to the roomy rear seat, and then slide back to their preset positions. Visibility is reasonably good: okay to the front corners, fine over the shoulder (partly because the roof pillar is far back on this 2-door body), and fair to the rear corners, which is helped when backing by a wide-angle rearview camera and large 7-inch dash screen. Totally unexpected for a car in this class were the heated steering wheel and ventilated driver seat (passengers have to do without), both of which are included in an $1800 Premium Package that also brings leather upholstery, a sunroof, and an auto-dimming mirror with Homelink transmitter – a luxury bargain. Far less of a bargain was another $1800 option, the Technology Package, along with various mats and such that added $285. Backing those out of the bottom line would have left our Koup at $23,400 (rather than $25,285), which strikes me as a great deal.

When it comes right down to it, my only complaint with the Koup concerns the cargo area. Not that it isn’t big enough – it’s really quite roomy – but rather that the folded rear seat backs rest a good 5 inches above the level of the cargo floor (which makes it hard to slide bulky cargo forward), and after the latches are released from the trunk area, the seat backs don’t drop without a push. But that’s really about it.

When I was growing up, no self-respecting car guy would ever be caught dead driving a 4-door. That general attitude has changed now, and so has mine; Forte’s 4-door hatchback version would now be my preference. But for anyone drawn to the sporty demeanor of a 2-door, Kia has clearly scored a major coup with the Koup.