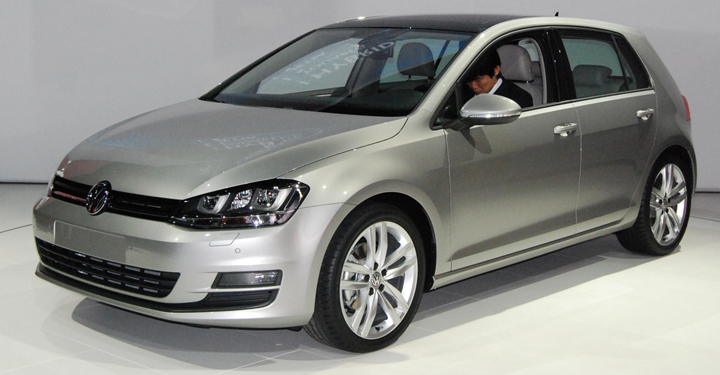 Following its world premiere at the 2013 Geneva Motor Show, Volkswagen is giving North American audiences their first look at the next-generation Golf compact car. While it might not look radically different than the car currently on sale, the “Golf A7” (7th generation) is a clean-sheet redesign with a new chassis, body structure, engines, features, and assembly plant.

The 2015 Volkswagen Golf will return in conventional gasoline, diesel-powered TDI, and high-performance GTI variants. These hatchbacks also reprise the choice of 2- or 4-door body styles, which is unique among compact and sporty/performance cars. All versions have a new body shell that, thanks to the use of high-strength steel, weighs 50 fewer pounds than the outgoing model. Other places where VW engineers sought to save weight are in the seats, air conditioning system, and electronics.

The car itself is longer, wider, and lower than its predecessor, which VW says translates into a 10 percent improvement in aerodynamics. Rear-seat legroom improves by 0.6 inches.

Arguably the biggest news lies under the hood. Volkswagen is phasing out its venerable 2.5-liter 5-cylinder engine in favor of a new 1.8-liter turbocharged 4-cylinder unit. According to VW, output is 170 horsepower and 184 pound-feet of torque. The former number matches that of the outgoing 5-cylinder while torque improves by seven pound-feet.

TDI models get a revamped 2.0-liter “clean diesel” 4-cylinder good for 150 horsepower (an increase of 10 over the 2013 model) and 236 pound-feet of torque (unchanged from 2013). VW engineers claim that with increased power comes reduced emissions, which is key to staying within the tough U.S. regulations for diesel powerplants.

GTI continues with a 2.0-liter turbocharged gas engine. Exact output wasn’t available when this was written, but VW expects 210 horsepower and 258 pound-feet of torque—gains of 10 and 51, respectively.

All models will be available with a manual transmission. The 1.8-liter Golf will offer a conventional automatic; the TDI and GTI will continue with an available dual-clutch automated manual (DSG in VW parlance) that behaves like an automatic.

As a final note, production for these small hatchbacks will move to the company’s factory in Puebla, Mexico, from its current home in Wolfsburg, Germany. Cheaper operating costs should hopefully translate to either no increase in suggested retail pricing or even a drop. The 2015 Volkswagen will go on sale in calendar 2014.

CG Says: The oft-overlooked Golf and GTI score high on the practicality and fun-to-drive scales. The next-generation models look like they will be in keeping with that fine tradition. Moving production out of the expensive Eurozone should make the bottom line more attractive for shoppers, and the new 1.8-liter turbo 4-cylinder engine should offer better performance and fuel economy than the old 5-cylinder motor. We can’t wait to try them.