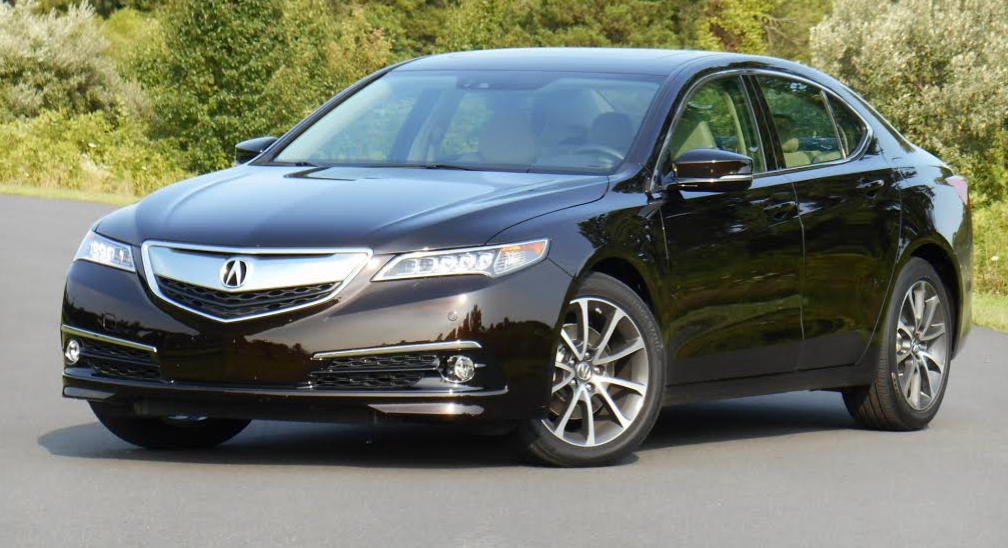 Acura replaces its compact TSX and midsize TL with a single sedan for 2015. Meet the new TLX, which slots between its two predecessors in size.

Although Acura has been quite successful with its recent SUVs (the midsize MDX and compact RDX), it hasn’t been as lucky with its cars. One problem in some eyes is that Acura has been slicing the automotive pie a little thin.

The lineup in recent years has started with the compact ILX, which was a new addition for 2013. Also considered a compact (though a somewhat bigger one) was the aging TSX, last redesigned for 2009, which was offered as both a sedan and as a nifty wagon. Then came the marque’s bread-and-butter midsize TL – also dating from 2009 – which was by far the most popular. Topping the line was the midsize RLX, new for 2014, that was barely bigger than the TL but decidedly more expensive.

With its two middle models needing replacement, Acura no doubt saw an opportunity to save money while also putting a little more distance between the cars sharing showroom space. The result was the new TLX, which replaces both the TSX and TL and slots between them in size and price (and cleverly carries over elements of both naming acronyms), thus making for a three-car strategy with clear divisions between them. 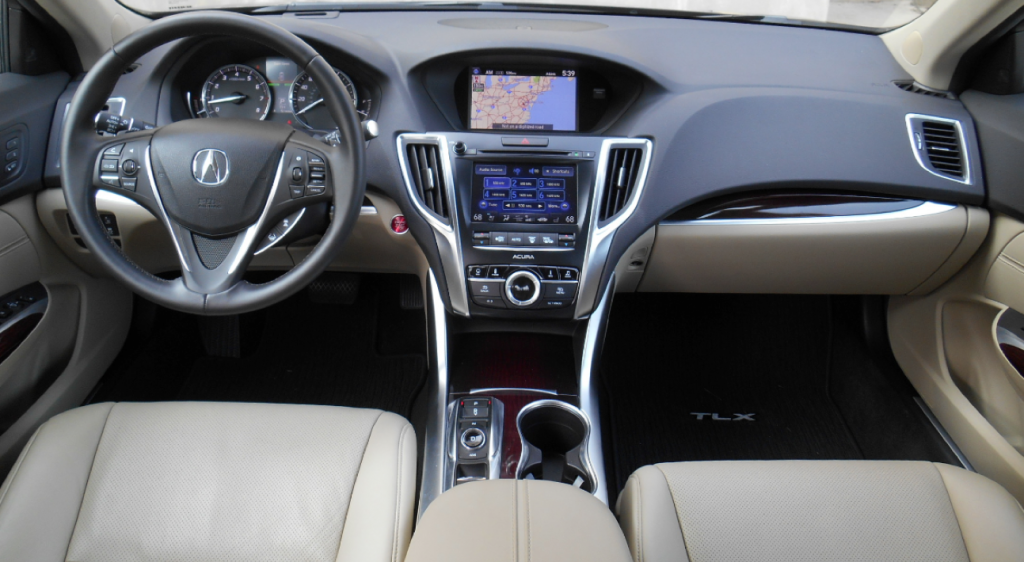 The TLX cabin feels both stately and modern, and decidedly upscale.

Compared to the former midsize TL, the TLX rides the same 109.3-inch wheelbase but is nearly four inches shorter overall. Next to the former compact TSX, the new car is four inches longer, both in wheelbase and overall length. So the TLX slots neatly between the two cars it replaces – and between the two other cars in the Acura stable. We call it a midsize, though it’s on the smaller end for that class.

Available drivetrains for the TLX encompass most of those previously offered in its two predecessors: 4-cylinder with front-wheel drive, V6 with front-wheel drive, and V6 with all-wheel drive. However, manual transmissions – which used to be available in both cars – are no longer offered. Furthermore, replacing the previous 5- and 6-speed automatics are two new transmissions: an 8-speed automated manual with the 4-cylinder, and a 9-speed conventional automatic with the V6. 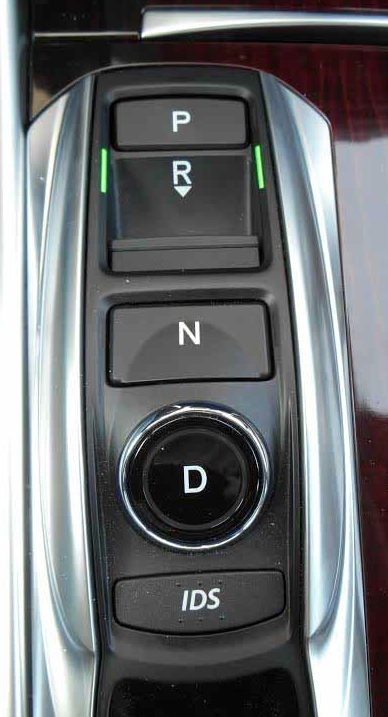 Only V6 models get a high-tech electronic pushbutton gear selector (above). Oddly, the more-advanced dual-clutch transmission that comes with the 4-cylinder has a conventional shift lever.

V6 models get a high-tech electronic pushbutton gear selector. Oddly, the more-advanced dual-clutch transmission that comes with the 4-cylinder has a conventional shift lever.

Outputs of the engines are up a bit from last year. The 2.4-liter 4-cylinder from the TSX that’s now standard in the TLX gets a boost from 201 to 206 horsepower, and it also gets a strong infusion of mid-range torque. Meanwhile, the 3.5-liter V6 that was previously standard in the TL and optional in the TSX gains 10 horsepower to 290. Dropped is the 3.7-liter 305-horsepower V6 previously offered in TLs with all-wheel drive.

On the road, even the 2.4 provides adequate acceleration for the class. Furthermore, unlike in some competitors’ turbocharged 4-cylinder engines, there’s no turbo lag or surging when nailing the gas from a stop; instead, the car moves off with a decent jump and a linear increase in acceleration. The new 8-speed dual-clutch automated manual transmission does its part by providing a significantly lower first-gear ratio than did the previous 5-speed automatic, and also exhibits fairly quick kickdowns when the throttle is stabbed at speed – which is not always the case with automated manuals. This transmission differs from most of its ilk by employing a torque converter in addition to the traditional dual clutches, which Acura says helps launch smoothness. While launches are indeed as seamless as in a traditional automatic, some upshifts and particularly downshifts when coming to a stop are more noticed than in most cars. But the payoff is that – according to Acura – the transmission is instrumental in cutting the 0-60-mph time by 1.5 seconds while boosting fuel economy by 2-4 mpg. We didn’t have the opportunity to substantiate either claim, but EPA fuel-economy estimates are indeed up compared to the 4-cylinder TSX, rising from 22 city/31 highway to 24/35.

While the 3.5-liter V6 provides an expected – and impressive – increase in oomph, we aren’t as enamored with the new 9-speed automatic’s performance. In most ways it was fine, but in several tests of part- and full-throttle kickdowns at a variety of road speeds, there was often an excessively long delay between the time the pedal went down and the car actually accelerated. This may be due to a computer-programming issue that could be corrected in the future, but it was clearly evident in our preview cars. The only time this wasn’t an issue was when the transmission was in Sport + mode (there are also Economy, Normal, and Sport settings), but that locks out the top two gears, holds the lower gears longer during acceleration, and uses a lower gear during cruise, none of which are good for fuel economy. Acura says that, compared to the old 6-speed automatic, the 9-speed helps drop the 0-60 time by half a second while raising the EPA fuel-economy numbers by 1 mpg city and an impressive 5 mpg on the highway to 21/34 (21/31 with all-wheel drive). Note that both engines require premium-grade fuel.

Standard on front-drive TLXs is Acura’s Precision All-Wheel Steer system (P-AWS). It turns the rear wheels slightly in the opposite direction of the fronts at lower speeds to increase maneuverability, while turning them slightly in the same direction of the fronts during high-speed lane changes to increase stability. While you can’t turn the system off to judge its effectiveness, the TLX does exhibit terrific road manners.

Meanwhile, the all-wheel-drive version of the TLX gets Acura’s Super-Handling All-Wheel Drive (SH-AWD). In a turn, the system directs more power to the outside rear wheel and can also brake the inside rear wheel if necessary, both helping to rotate the car into a turn. Like P-AWS, it cannot be turned off, so its effectiveness is difficult to gauge. But suffice it to say that this version, too, exhibits strong, confident cornering power.

Because our preview drive route in Virginia didn’t contain the potholes and pavement heaves that are prevalent around our Chicagoland headquarters, it’s difficult to judge how the TLX will handles those road irregularities (or regularities in these parts). But although the ride is on the sporty/firm side, the TLX soaks up the small stuff reasonably well. There is also little road or wind noise, so the car comes off as the premium-level vehicle it is.

Interiors, too, manage to provide a premium feel. This is harder to do now than it used to be, as “regular” cars have significantly raised the bar in recent years. Acura does it here with a stately yet modern design backed by wood and matte-silver trim accenting available two-toned interiors with numerous padded surfaces. Decent storage is provided by a good-sized two-tiered glovebox, two-tiered forward console tray with USB and 12-volt plugs, two open console cupholders, a moderate-size console box with Aux and 12-volt plugs, and small map pockets. 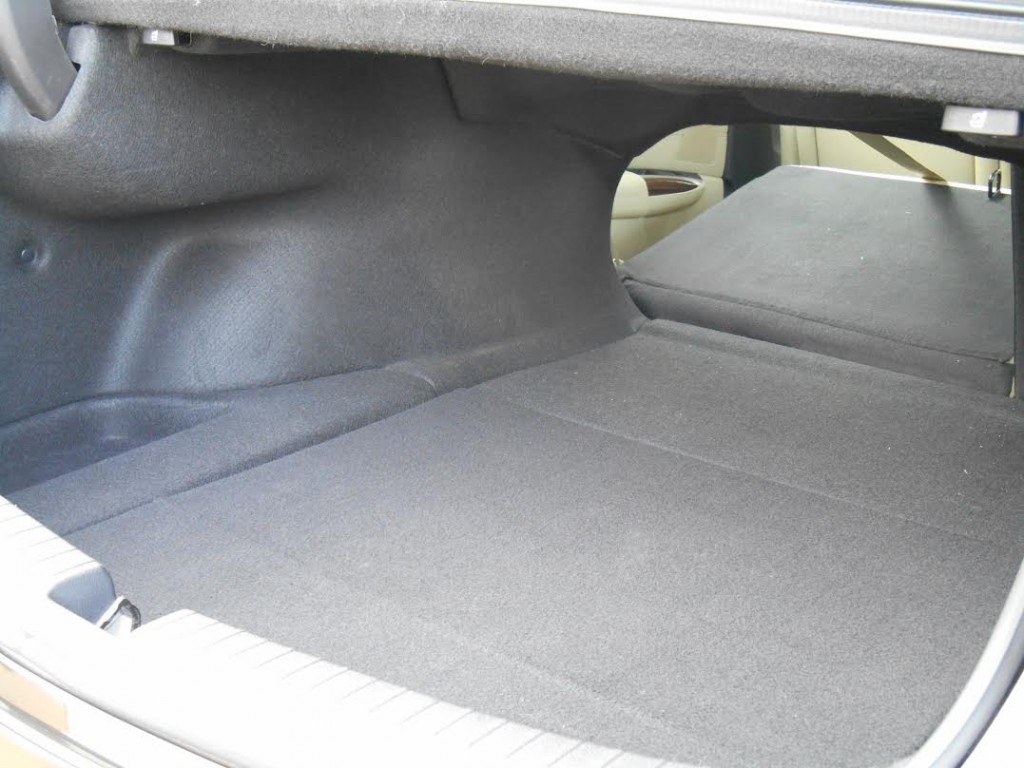 There’s plenty of room in front for tall drivers. Rear head and leg room are adequate for 6-footers as long as the front seats aren’t pushed far back, and egress is fairly easy. Visibility is good to the front corners but is somewhat restricted to the sides due to thickish roof pillars. It’s worse to the rear corners and straight back, though a really good, wide-angle rearview camera is standard.

While we prefer traditional knobs and buttons for basic audio and climate controls – and the TLX has precious few of them – its controls are easier to use than many of those found on premium cars. The audio system has a volume knob, with all other functions controlled through either steering-wheel controls or large, virtual buttons on the touchscreen. Climate controls consist of dual-temperature “flippers,” a repetitive-step pushbutton for fan speed, and virtual screen buttons for mode and seat heating/cooling. All are within easy reach, but traditional dials would be much easier to use. Other functions, such as the navigation system, are controlled through a combination of dash-mounted buttons and a large knob, with the map showing up on a second, high-mounted screen.

The trunklid has covered, sickle-shaped hinges that eat up a bit of space, and the trunk opening is rather small, but the trunk itself is wide at the rear with a flat floor. The rear seat backs fold nearly flat and level with the load floor, but the opening is rather restricted. There are two big underfloor storage bins, but no spare tire; instead, you get an inflator kit.

As with most redesigns these days, added features are a main attraction. Though not all are new, the TLX now offers forward collision warning, collision mitigation braking, lane-departure warning, lane-keep assist, road-departure mitigation, blind-spot alert, and rear cross-traffic alert. None are standard (some are available in the 2.4’s Tech Package, others available only on the V6), though a wide-angle rearview camera is. So is a tire-pressure monitoring system that displays individual tire pressures and sounds an alert when filling the tire and the proper pressure is reached. Other available high-end features include adaptive cruise control, front and rear park assist, AcuraLink assistance with real-time traffic and traffic rerouting, Siri eyes-free interface, text messaging and e-mail capability, remote engine start, speed-sensitive audio volume, driver-seat power lumbar support, and heated and ventilated front seats. Most of those are either in the 2.4’s Tech Package or only offered with the V6, but a new feature that’s standard is a capless fuel filler. 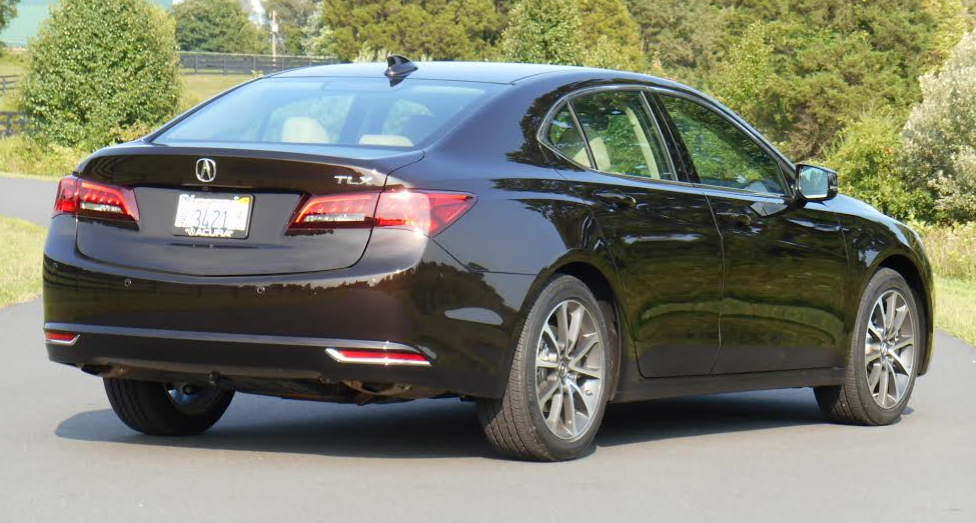 The TLX starts at $31,890 including destination charge.

Seeing as the only options are a Tech Package for the 2.4 and Tech and Advance Packages for the V6 (Tech is standard with all-wheel drive), the TLX is priced on the low side for a premium-midsize car. In fact, even the top-line V6 with all-wheel drive and Advance Package – the most expensive TLX – lists for less than $45,000, which seems like a bargain in this class. Whether it helps Acura sell its other two cars remains to be seen, but it should appease fans of the former TSX or TL who would otherwise hate to see them go.