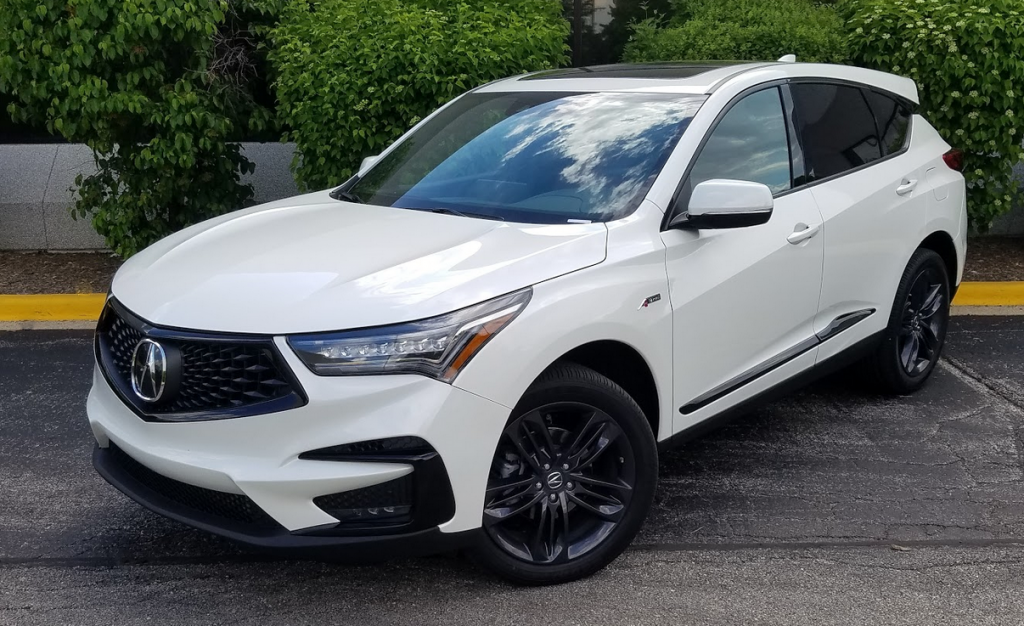 The not so good: A few quirky controls might turn off some shoppers

Four days and 635 miles ought to be enough to get a good feel for the quirks and capabilities of a particular vehicle—say the 2019 Acura RDX. However, the copy of the redesigned premium compact sport-utility that Consumer Guide® sampled didn’t wait but about five minutes and just past the first mile down the road to do something impressive. 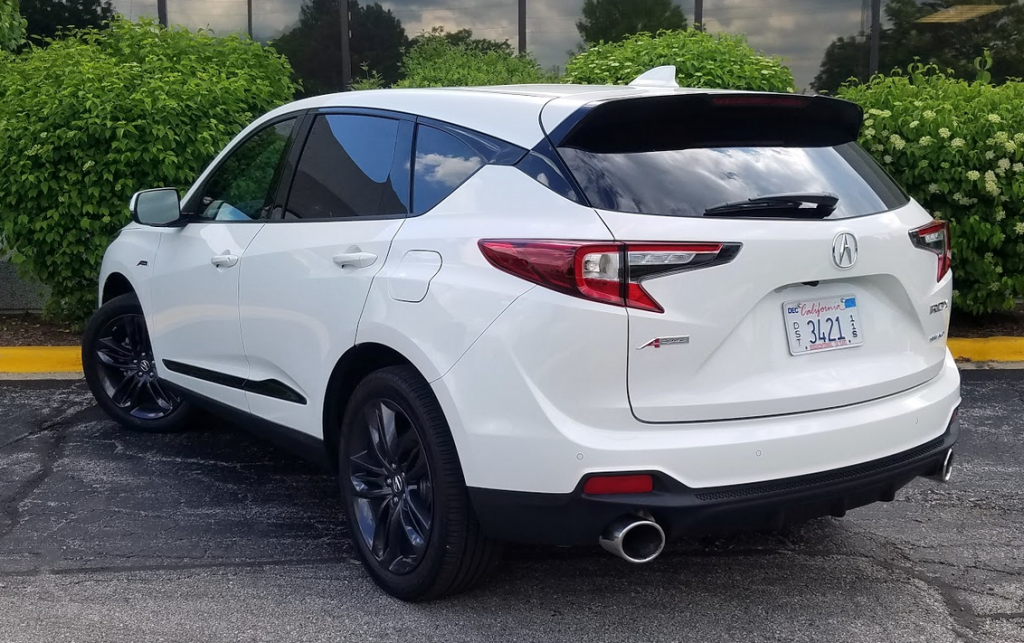 In A-Spec trim, the RDX takes on an aggressive look thanks to its Shark Gray 20-inch wheels, blacked-out body trim, and larger-diameter exhaust finishers. Other RDXs offer a more traditional luxury-vehicle look.

Bound for home and with CG Supreme World Headquarters barely faded from the rearview mirror, this driver started the tight right-hand turn around a small traffic island that he makes almost every workday. This time, though, there was a sensation of something switching on to improve the precision and ease of the turning process, a gentle push in the desired direction.

That was the work of “Agile Handling Assist,” a system that applies braking to inside wheels in such situations to generate added turning force and reduce understeer. In all-wheel-drive models like the test vehicle, Agile Handling works in tandem with Acura’s torque-vectoring “Super-Handling All-Wheel Drive” (SH-AWD) to maximize handling and traction. The third-generation RDX adds the latest version of SH-AWD, but the engine, transmission, styling, and infotainment interface are new too.

The RDX’s new A-Spec model is available with red-leather upholstery that, along with some other sporty trim features, really livens up the interior ambiance. Rear-seat passenger space is generous enough to be comfortable for adults. 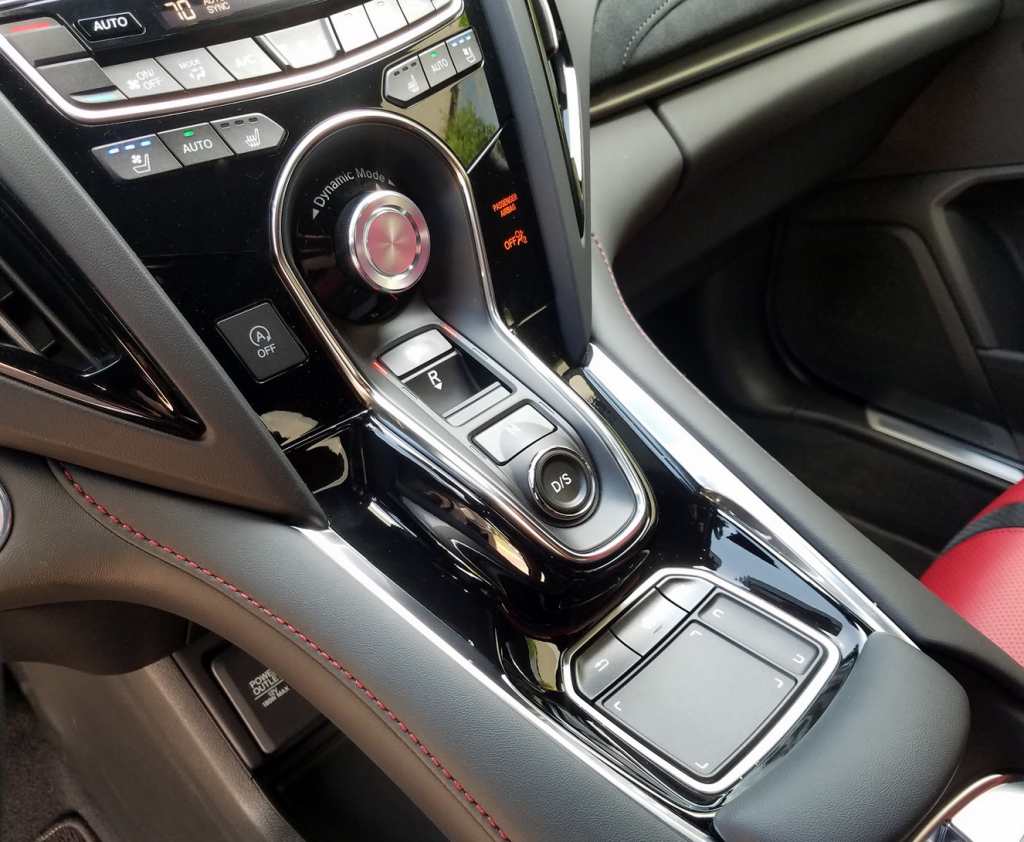 The new RDX has some unconventional controls, such as the push-button gear selector and “True Touchpad” infotainment interface, that might turn off traditionalist shoppers, but our testers acclimated to them well enough.

A turbocharged 2.0-liter 4-cylinder engine is the new RDX powerplant. It makes almost as much horsepower—272—as the 3.5-liter V6 it replaces, but peak torque of 280 lb-ft. is higher than in the old engine. Plus, Acura points out, it outpowers key luxury-class competitors from Audi, BMW, Mercedes-Benz, and Volvo with similar engines. If the RDX’s power output falls short of startling, it’s still very good with virtually no turbo lag and a steady flow of go on the way up to highway-cruising speeds. All of this is aided and abetted by a very smooth 10-speed automatic transmission. This driver’s test revolved around a Chicago-Detroit trip steeped in sustained high-speed Interstate-highway miles, which the RDX handled with quiet and calm.

EPA fuel-economy estimates for the test vehicle were 21 mpg in the city, 26 on the highway, and 23 combined. (A-Specs are rated one mpg lower on the highway than other RDX models.) Due to the nature of the weekend trip, just 10 percent of total test miles were in city-style driving. Three fill-ups resulted in an aggregate 23.5 mpg. (Oddly, the shortest and most “citified” segment got the best mileage—26.5 mpg.)

Ride quality throughout our test was extremely good. The new RDX platform has a 2.6-inch-longer wheelbase, wider front and rear wheel tracks, and a redesigned 5-link independent rear suspension—all of which help. A series of drive modes—“Snow,” “Comfort,” “Sport,” and “Sport+”—ratchet up damping and steering efforts. Comfort is hardly flabby, and will be fine for most drivers’ needs most of the time. At the same time, neither of the Sport modes is overly stiff. There was barely a whiff of vibration through the steering column.

Mention of drive-mode control is a handy segue to the topic of controls—some weird and some wonderful. The mode-selector dial is on the vertical face of the instrument-panel center stack. Just below it is the Honda/Acura automatic-transmission control, which consists of push buttons for Park, Neutral, and Drive, plus a pull-back lever to activate Reverse. Further down the “floating” center console is the pad for the “True Touchpad” system. Audio, navigation, and other system displays show up on a colorful 10.2-inch screen perched atop the dash, but the systems are managed through the central touchpad. This confirmed central-controller skeptic had to admit it works all right once you get used to the idea that what you see on the screen corresponds to roughly the same spot on the touchpad. If the screen “button” you’d like to activate is at the lower right, then tap the lower right of the pad, etc. There’s no dragging a fingertip or manipulating a mouse across the active control area while attempting to drive. Though it might have been faster to try voice commands, this driver and his official test spouse used the pad to type addresses into the nav system, which, by the way, works well and quickly. 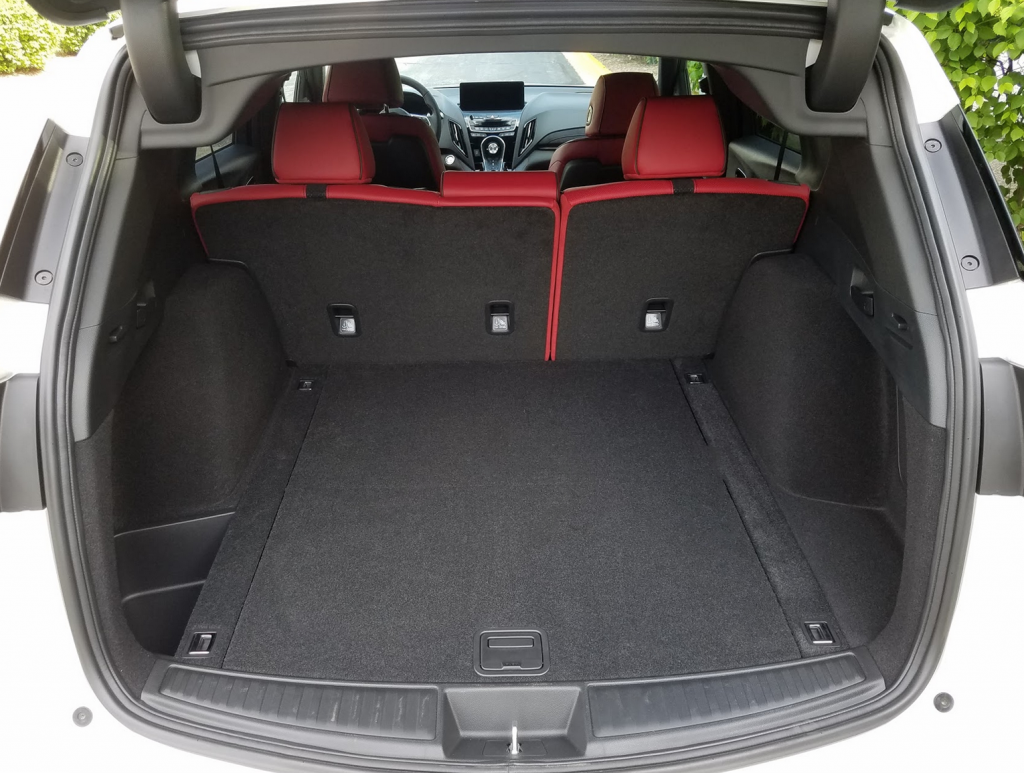 The rear cargo area provides 31.1 cubic feet of space behind the rear seats, or 78.1 cu. ft. with the rear seat backs folded. There is an additional 1.7 cu. ft of space in a bin located beneath the cargo floor.

The test truck’s red seats not only enlivened the mostly black interior, they also delivered top-shelf comfort for long drives. Soft surfaces are abundant on the dash, door panels, and even the sides of the console in the tastefully finished space. There’s a sense of openness to the cabin, with good leg- and headroom in both rows—a function of the new model’s larger dimensions. Three adults could fit comfortably across the rear seat. Driver vision is fairly good to all areas except where the rear quarters rise to meet the rear roof pillars.

The flat-floored cargo area held a weekend bag and a soft-sided medium suitcase with room to spare. (The redesign adds 3.4 cubic feet to the RDX’s cargo bay.) A 1.7-cubic-foot bin rests under the floor mat. Rear seats are split 60/40 and fold fully flat to create lots more load space. Personal-item storage options are better in front than they are in the second row. The open area under the angled console creates a handy stash for a purse, snacks, or small shopping bags.

Styling and engineering for the new-generation RDX were done in the U.S., where crossover SUVs are vigorously ascendant, so it seems that Acura was keeping its ear to the ground closest to the target audience during development. You may like what they heard.

The redesigned-for-2019 Acura RDX is an excellent revamp of a a vehicle that was already a premium compact SUV class leader. It’s an exceptionally well-balanced crossover that delivers satisfying performance, luxury, and utility.