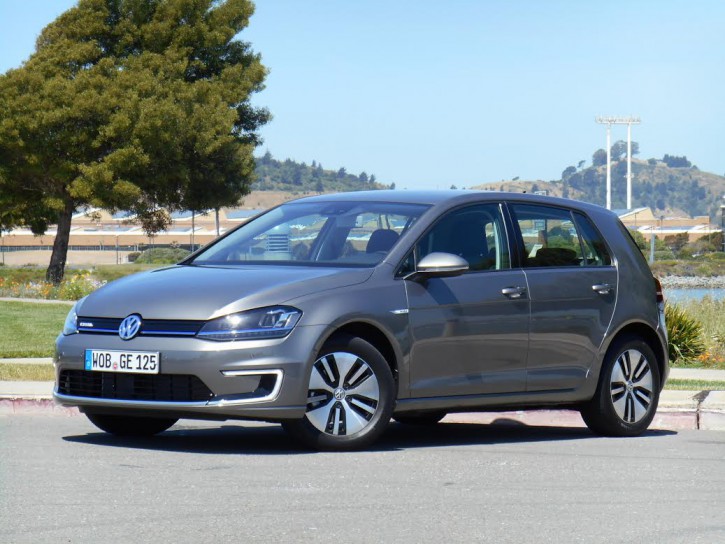 The all-new 2015 Volkswagen Golf starts at $18,815 in limited-run Launch Edition trim. Shown is the all-electric e-Golf, due later this year.

In this case, being “over par” is a good thing.

Most Volkswagens have long occupied a gap between “regular” and “premium” nameplates in the areas of cost and refinement, and the redesigned 2015 Golf, GTI, and new electrified e-Golf are no exception. The only break from tradition is that there isn’t as much of a cost differential as there used to be. In fact, some model prices have come down significantly, despite the fact that their list of standard equipment has been lengthened and fuel economy has been improved.

Golf dashtop, armrests, and even the door tops are padded. A combination of brushed and matte silver trim along with an available two-tone color scheme lend a classy look to the interior.

Let’s start with the Golf, which is the volume leader and basis for all three models. Last year, the base 2.5L with a 2.5-liter 5-cylinder engine and 6-speed automatic started at $20,815 including destination. Compared to other compacts, that’s a bit steep – even with the Golf’s strong standard-equipment list – but it was reasonable considering the car’s “upmarket” placement.

For 2015, there’s a new entry-level Launch Edition that comes only in 2-door form with 5-speed manual transmission, but it starts at $2000 less: $18,815. It also adds standard iPod connection and 5.8-inch touchscreen. However, to get an automatic transmission, you have to jump to the next highest model (which also offers a 4-door version) and add the automatic, which brings you to $20,915 (add $600 for the 4-door), or about the same price as the 2014.

Notably new for 2015 is that the base engine is now the 1.8-liter turbocharged 4-cylinder offered in VW’s larger cars. It produces the same 170 horsepower as the old 2.5-liter 5-cylinder, but a bit more torque: 200 lb ft vs. 177. According to preliminary estimates, it also produces better EPA fuel-economy numbers: 26 city/37 highway with manual transmission compared to the previous model’s 23/30 with automatic – a significant 3- to 6-mpg increase. (Figures for the automatic were not yet available, but should be similar.)

But the real “value” boost comes in the diesel-powered TDI. For 2014, it started at $26,020 including destination, but for 2015, that drops to $22,815 (both with manual transmission). Horsepower output increases from 140 to 150 and fuel-economy estimates are up by 1 in the city rating (now 31 city/42 highway), with the only downside being that the car now requires the use of AdBlue diesel exhaust-treatment fluid.

Since its introduction in 1983, the GTI has been the “hot hatch” against which all others are measured. And for good reason. Through what is now seven generations, it has combined the moves of a sports car with hatchback versatility in a package that boasts remarkable refinement.

Is this the cutest Volkswagen, ever?

Aside from the changes that affect all Golf models for 2015, the new GTI gets a significant power boost, some performance-enhancing options, and what VW says is a $700 price cut based on a content-adjusted comparison. Indeed, the price of entry drops from $25,915 for last year’s 4-door model to $25,215 for this year’s 2-door S — $25,815 for the 4-door version – both of which add some equipment. While their 2.0-liter turbo 4-cylinder sees just a small increase in horsepower – from 200 to 210 – it gets a major bump in torque: from 207 lb ft to 258. Furthermore, available later in the model year will be an optional $1495 Performance Package that adds another 10 horsepower, along with a torque-sensing limited-slip differential and bigger brakes. Also, EPA fuel-economy estimates are up by about 3 to 4 mpg to 25 city/34 highway with the 6-speed manual transmission and 25/33 with the 6-speed automatic.

The original GTI (left), arrived Stateside for the 1983 model year. The all-new GTI (right) boasts 210 horsepower, 120 more than the original.

Due toward the end of 2014 is the 2015 e-Golf, Volkswagen’s first all-electric car to be sold in the U.S. Distinguished by some external-styling tweaks – primarily specific LED headlamps and unique wheels – the e-Golf will only be offered in 4-door form and sold only in select states (probably just California and Oregon). Its 24.2-kilowatt-hour battery (kWh) is said to provide a real-world range of about 70 to 90 miles, and the e-Golf comes standard with level 3 (480-volt DC) quick-charge capability. It is expected to be able to sprint from 0-60 mph in a very reasonable 10 seconds, roughly the same as a Nissan Leaf. It also comes with a Roadside Assistance Plan that Volkswagen says is “designed to take the anxiety out of ‘range anxiety.’” If the driver is within 100 miles of home and runs out of charge, VW will deliver the car to a nearby charging station and even pay for the driver to take a taxi home.

Drives in each of the models proved the point mentioned earlier: that VWs are a cut above. Solid steering feel, muted thumps over bumps, quietness, ride composure, and interior design and materials all befit a car with a premium nameplate. Furthermore, a host of today’s popular technologies are now available, some being rare in the compact class. 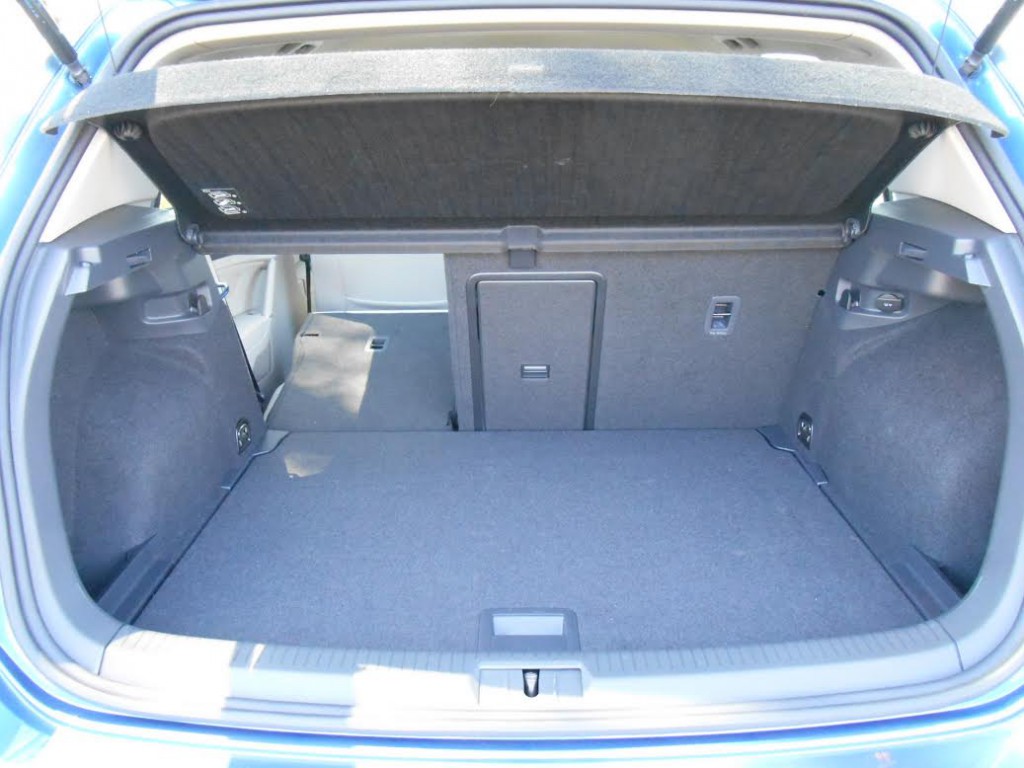 Park yourself in the driver seat, and several things become apparent that support the aforementioned accolades. The dashtop, armrests, and even the door tops are padded. A combination of brushed and matte silver trim along with an available two-tone color scheme lend a classy look to the interior. The center-stack controls are angled toward the driver and consist mostly of obvious, easy-to-use knobs and some virtual touchscreen buttons, all within easy reach. There’s a good amount of interior storage, and – if the rear seat backs happen to be folded – you’ll see that the resulting cargo floor is nearly level and flat (making it easy to slide in large objects), if just a bit narrow at the rear. There’s some additional cargo storage beneath the cargo floor, and there’s also a ski pass-through in the seat back. The front seats are comfortable, and our upper-line test model included adjustable lumbar support for both the driver and passenger (the latter being rare). The only real demerit noted is that while the front and side pillars are fairly thin and easy to see around, the rear pillars are quite thick and block a lot to the corners. This wouldn’t be so bad if a rearview camera were standard, but it’s not; it’s only available as an option.

Another demerit appears once under way. While going from the old 2.5-liter five-cylinder to the 1.8-liter turbo four may have brought a bit more power and a fair improvement in fuel economy, it didn’t do anything for drivability. In normal commuting, the new combo works fine. But nail the gas from a stop, and the car moves off the line a bit lazily, quickly followed by a stronger surge that isn’t always linear. Furthermore, hit the gas while under way, and the transmission often hesitates to downshift, and when it finally does, engine response again ebbs and flows a bit – something that’s particularly noticed accelerating out of corners.

That powertrain complaint wasn’t at all evident in the GTI driven. First of all, it was equipped with the smooth-shifting manual transmission, which both negated the automatic’s downshifting dilemma and helped tremendously with the fun-to-drive factor. Furthermore, its torquey 2.0-liter turbo four is a gem, with plenty of punch even down low in the rev range and seemingly more linear – to say nothing of substantially stronger – power delivery. I should note that our test car had the optional Performance Package, but I doubt that made a sizeable difference.

Another area in which Volkswagens typically excel is in their ride/handling combination, and the GTI continues this trend. Many of its sporting ilk make you suffer a stiff ride in trade for sharp steering response and exceptional cornering capability, but although the ride is indeed firmer than in the workaday Golfs, it comes off as being more “solid” than “harsh.” Without question, this GTI carries on as the benchmark for all hot-hatch contenders. 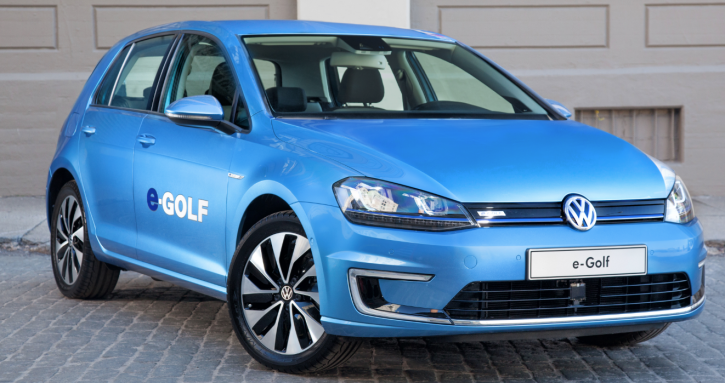 The all-electric e-Golf swaps a 24-kWh battery for a fuel tank, and should travel around 80 miles on a single charge.

Although our drive in the all-electric 2015 e-Golf was limited, a few things quickly became apparent. In addition to carrying on the general overall goodness of the Golf, the car offered smooth and adequately strong acceleration along with the instant throttle response for which electrics are known. My only complaint is that turning off the traction control didn’t allow the kind of smoking-tire starts that can be coaxed from some electrics (this the result of the fact that electric motors produce their full power as soon as they start to turn). But that, in the whole scheme of things, is a pretty minor – and decidedly juvenile – complaint. 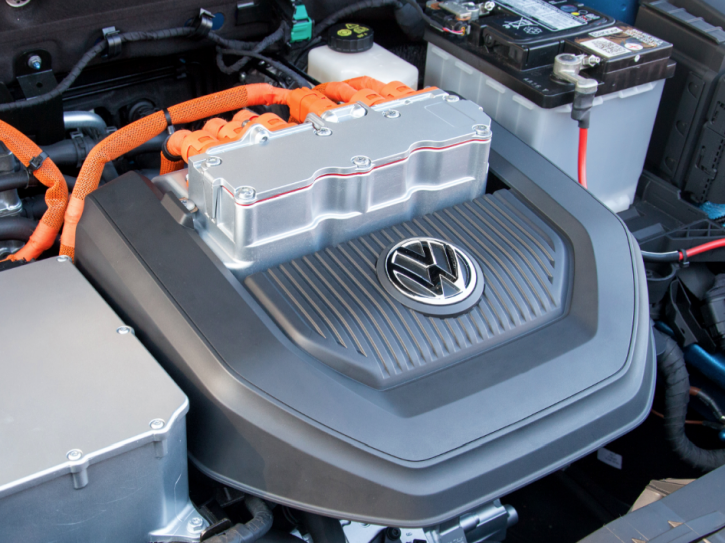 Volkswagen went some distance to make the underhood area of the e-Golf look like that of any other VW. Yet, despite the manifold-cover-looking plastic shell, there’s nothing that burns gas or diesel fuel in this “engine” bay.

So the bottom line is that the redesigned 2015 model – though not looking too much different than its highly praised predecessor – carries on the traditional Golf goodness while adding available features, improved fuel economy, and even a potential price cut. And that’s enough to keep them a few strokes ahead of most contemporary compact competitors.
Check out the Consumer Guide Car Stuff Podcast