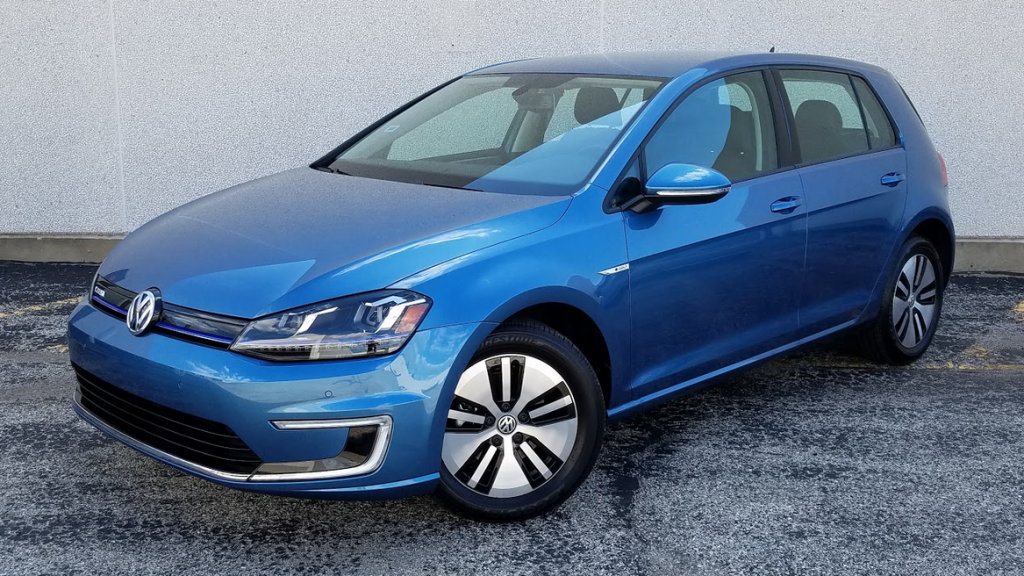 The great: Quick off the line in “normal” model

The good: Looks and feels much like a conventional Golf

The not so good: Costly in SEL Premium trim

If Volkswagen has a hope of starting to win back its green-car credibility following the diesel-emissions fiasco, that hope may rest on the slender shoulders of the e-Golf. The fully electric compact four-door hatchback is a newcomer to the line for 2016. Its power source aside, it is essentially the same as the internally combusting Golfs that ply the roads in great numbers.

Like some other electric cars, notably the Kia Soul EV, the e-Golf really is a “compliance car” for states with strict air-quality standards that require some zero-emissions vehicles in the product mix. As such, this Voltwagen is on sale in just 10 East and West Coast states, plus the District of Columbia. However, at least one was diverted to the Midwest, which gave the lads at Consumer Guide® a chance to try it out. 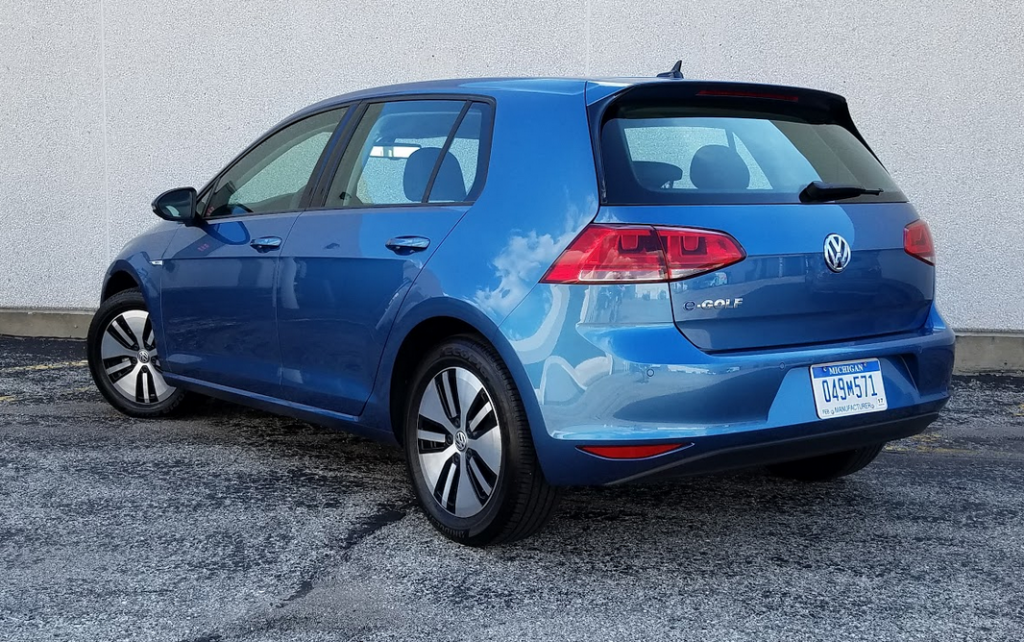 The e-Golf comes in two states of trim: SE and SEL Premium, the latter being the more expensive of the two—and the one that CG tested. There’s just one drivetrain, though, a 115-horsepower electric motor fed by a 24.2-kilowatt/hour lithium-ion battery, with a single-gear automatic transmission. 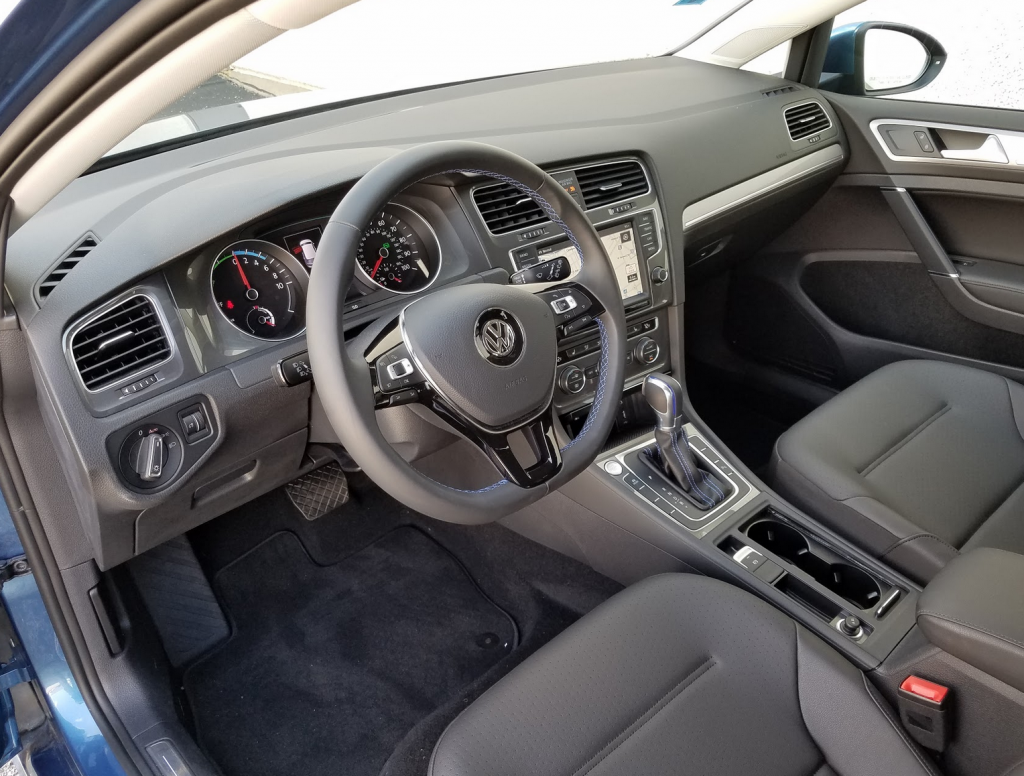 The e-Golf cabin will feel familiar to anyone who has spent time with a conventional Golf. Any Golf offers a generous amount of front-row head- and leg room.

VW claims a driving range of about 83 miles for a fully charged Golf. Things like temperature, driving style, and accessory use can affect that number. This driver put together three work/home round trips, each of exactly 57.9 miles, albeit starting from different indicated levels of “full” charge that ranged from 109 to 129 miles. Those, by the way, were in the stingiest of the three selectable operating modes. “Econ+” doles out the least motive power and precludes use of the air conditioning, but with a July warm spell in effect with daily highs nudging 90 degrees, this driver barely exercised that option. Most of his driving was in “Econ,” which provides a little more acceleration and supports the A/C. “Normal” takes fullest advantage of the available power, though daily range projections for the car in this setting started at 89 to 125 miles.

Those lofty initial range projections might be a little deceptive. It seems as if the car adjusts to the driver’s style and quickly revises the range. For instance, on the day that I started off with the 129-mile projection, within one actual mile of restrained surface-street driving in Econ+ the range dropped to 124. Initially, the range spreads between the three modes can show much variation, and even switching off the air conditioning will register a potential gain of 12 or 15 miles of range for Normal or Econ. However, once the car has been run for a while, the calculated differences between the settings narrow. The e-Golf also lets the driver select from three levels of regenerative braking to feed energy back into the battery and potentially restore some range.

In all three of my daily drives I made the round trip with plenty of juice to spare—certainly enough for a third leg back home had I wanted to—but two full round trips on a single charge would have been chancy (and sweaty) at best, and foolhardy at worst. The best available remaining range was on the final trip with 54 indicated miles left in Normal (with A/C), 56 miles in Econ (with A/C), and 61 miles in Econ+. Each of my trips ended up at the same place: the 240-volt charger at CG’s offices. Based on the report that shows up on the vehicle-information display on the instrument cluster, times to full recharge during my tests ran from two hours, 10 minutes to two hours, 30 minutes. VW reports a level-2 charge from “empty” should take about three hours, 45 minutes. As for how this stacks up against gasoline, EPA equivalency figures are 126 MPGe city, 105 highway, and 116 combined. 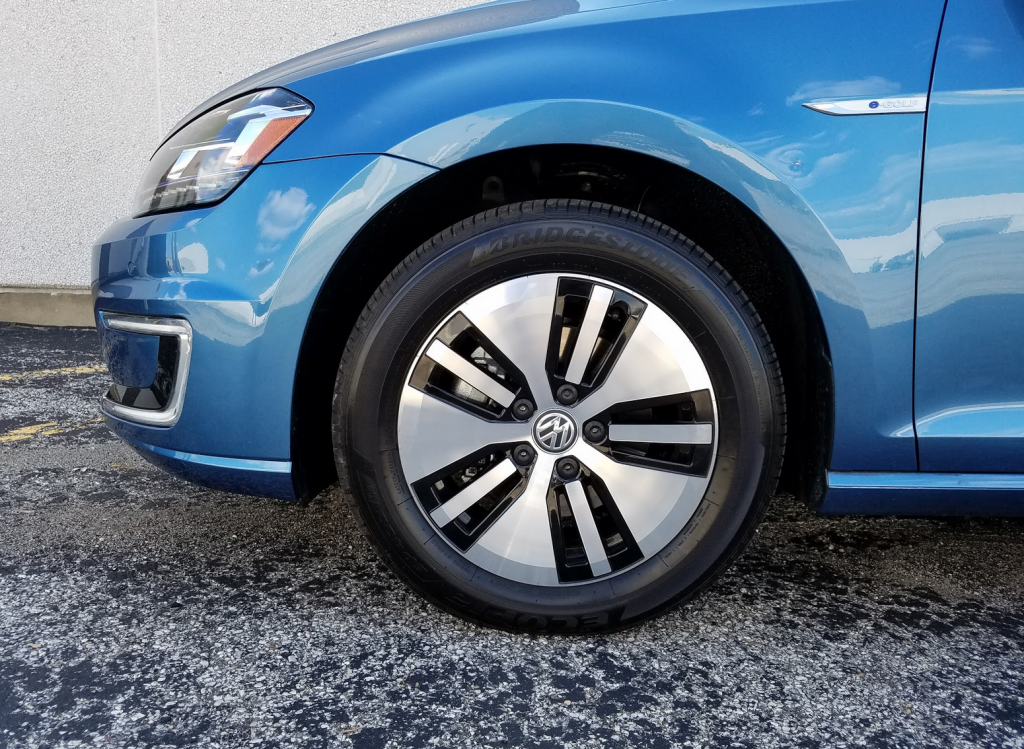 In terms of on-road performance, the e-Golf can feel downright slow in Econ+ even rolling away from a stoplight in tame in-town driving. Econ is a little quicker off the jump and delivers acceptable power for safe expressway cruising. Normal may–ahem–shock drivers. Possessed of a peak 199 lb-ft of torque (as much as the 1.8-liter turbocharged four-cylinder engine in gas-burning Golfs makes), the e-Golf is ready to bolt at a stab of the accelerator. For safety, a determined tromp of the pedal while in either of the Econ settings will activate full power. As in many electrics, braking doesn’t feel instantly effective, but ride and handling are on par with that of gas Golfs—and that’s pretty good. Low-rolling-resistance tires on 16-inch alloy wheels are standard. This tire type customarily gets noisy in highway driving, but the VW does of good job of keeping this at bay.

Inside, the e-Golf generally looks and feels like any other comparably equipped four-door Golf. The most glaring difference is a charge meter in the left instrument dial where a tachometer would be in a gas model.

The SEL Premium starts at a considerable $35,595 (before federal electric-car credits are applied, of course), which is $6600 more than an e-Golf SE. Perhaps the most significant things that extra money buys are a higher-capacity 7.2-kilowatt onboard battery charger, direct-current level-3 “fast-charge” capability, and the addition of the Guide & Inform suite to the VW Car-Net smartphone-compatible app connection that is newly standard in all 2016 Golfs. (The 7.2-kW charger and DC charger are available for the SE in an option package.) Other SEL Premium upgrades include automatic LED headlamps, leather-wrapped steering wheel and shifter knob, leatherette-upholstered seats in a choice of two colors, ambient interior lighting, automatically dimming rearview mirror, cruise control, “Park Pilot” parking-distance control, and Discover Pro eight-inch touchscreen system with navigation.

The “regular” Volkswagen Golfs are among our favorite compact cars at Consumer Guide, and the e-Golf carries over the charms of its gas-powered kin intact, while delivering all the benefits–and compromises–of an electric powertrain. 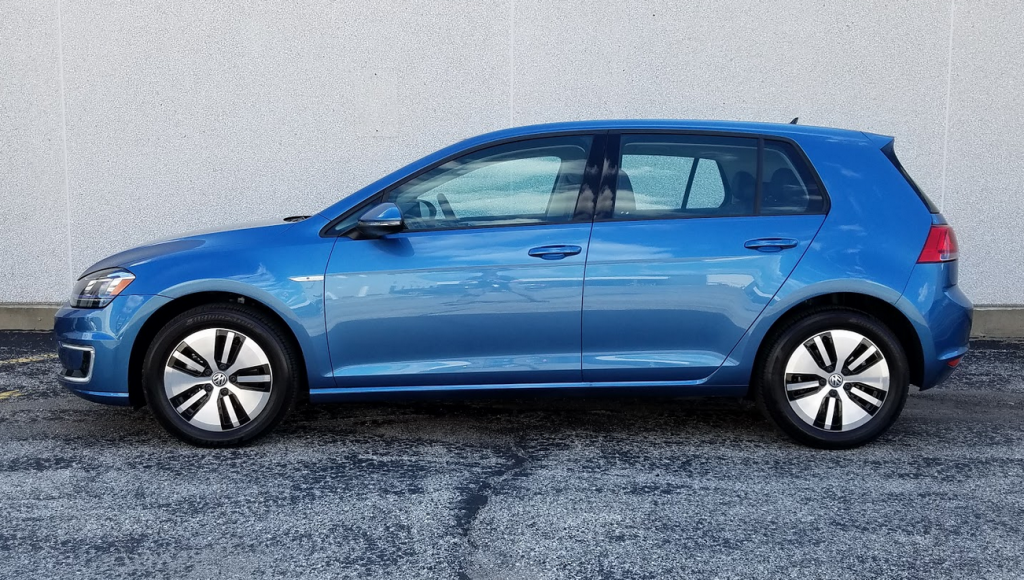