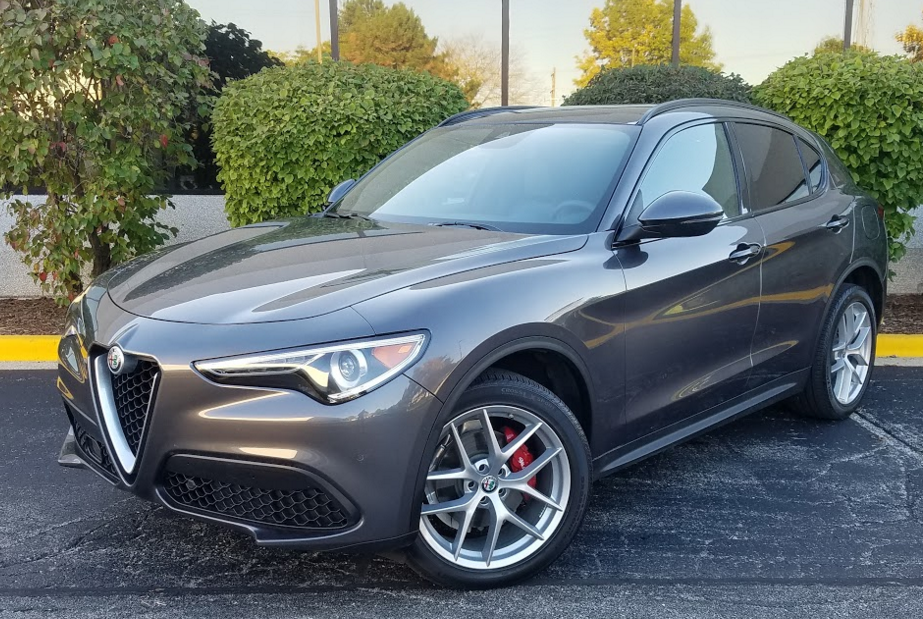 The great: Steering and handling

The good: Potent power (once the turbos kick in)

The not so good: Quirky control layout

Alfa Romeo’s third entry in its U.S. revival (after the 4C sports car and Giulia sedan) takes on sporty rivals in the popular premium compact crossover segment. Named after a mountain pass in northern Italy, the Stelvio is offered in “hot” Base/Sport/Ti/Ti Sport guise with a 280-horsepower 2.0-liter 4-cylinder turbo, and “blistering” Quadrifoglio form (due out later) with a 505-horsepower (!) 2.9-liter twin-turbo V6. All versions come with an 8-speed automatic transmission and all-wheel drive. 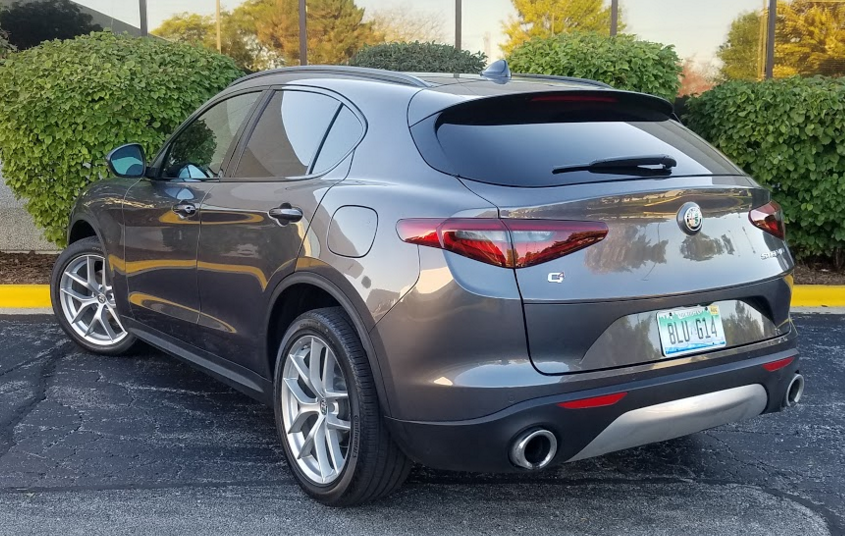 A $2500 Ti Sport Package added our tester’s 20-inch wheels and red brake calipers (the latter shown in opening photo) along with a host of “sporty” interior features.

The Base model starts at $42,990 (including $995 destination) and includes such unusual-for-the-class standards as leather upholstery, rain-sensing wipers, 10-way driver and front passenger seat with lumbar adjustment and driver-seat memory, rear obstacle detection, and a power liftgate. The tested Ti adds $2000 but brings an 8.8-inch (vs. 6.5-inch) dash screen, satellite radio, heated front seats and steering wheel, and front obstacle detection. Added in our tester’s Ti Sport Package ($2500), were 20-inch wheels, painted brake calipers, 12-way (vs. 10-way) power seats with power bolster and thigh support, and aluminum interior accents. The $200 Convenience Package brought adjustable rails in the cargo compartment and a 115-volt AC power outlet. Added in the $650 Driver Assistance Static Package were blind-spot and rear-cross-traffic alert and auto-dimming exterior mirrors. Oddly, you have to check off our tester’s $1500 Driver Assistance Dynamic Plus Package to get forward collision warning and mitigation (which is often standard nowadays), but it also brings lane-departure warning, adaptive cruise control, and automatic high beams — all of which makes this a “must have” option that’s also offered on the Base model. Also included on our test vehicle were a dual-pane sunroof ($1350), navigation system ($950), Harman Kardon premium audio system ($900), Vesuvio Gray Metallic Pearl paint ($600), and a compact spare tire ($450). If you haven’t been doing the math, that makes for a total of $9100 in options that brought the bottom line to $54,090 — a lot, certainly, but not outlandish for a loaded vehicle in this class. And you could pass on many of them and still have a very well-equipped vehicle.

Stelvio is clearly aimed at sporty rivals such as the BMW X3 and its “fastback” X4 counterpart, along with the Audi Q3 and Q5, Jaguar F-Pace, and Mercedes-Benz GLA Class. While Stelvios with the 2.0-liter turbo hold their own in this group, the Quadrifoglio will likely make its mark as the performance leader of the class.

However, the tested Ti is still plenty potent. Alfa claims 0-60 mph comes up in 5.4 seconds, and we wouldn’t argue with that figure. While flooring the throttle from a stop results in some typical “small engine” turbo lag, it’s not as bad as in some vehicles, and it’s followed by a strong surge once the turbos really get spinning. And even when your right foot isn’t buried in the carpet, the engine makes a raspy exhaust note that’s music to an enthusiast’s ears. Though emitting an occasional “clunk,” the transmission downshifts fairly quickly from speed to help provide good passing power, and our tester came with prominent steering-wheel paddles that make it easy to shift for yourself. Add in impressively quick steering response and nimble handling despite a relatively compliant ride, and the Stelvio — even in this “less than all-out” form — lives up to its brand name’s sporting reputation.

After that, however, Alfa’s latest creation falters a bit. 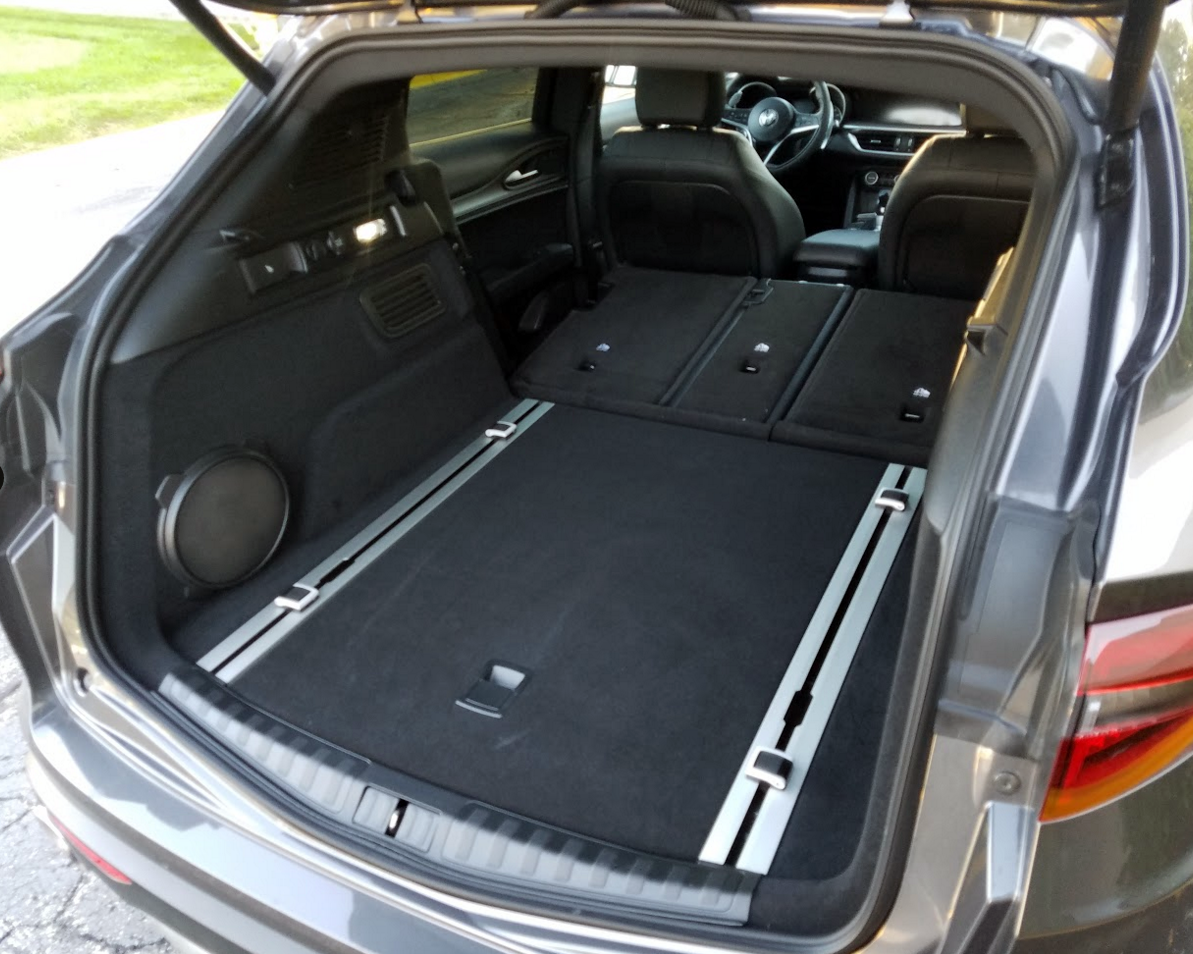 Floor rails with adjustable tie-down hooks are part of the Convenience Package, which later in the year is due to add the availability of a hands-free power liftgate.

While passenger room and cargo space are about par for the class, our notebooks were filled with what could charitably be referred to as “personality quirks.” The aforementioned shift paddles — while great for calling up your inner Andretti — are so large that they block easy access to the turn signal and wiper stalks. While it’s nice that Alfa added a left-side dash bin and right-side console net to the usual interior storage spaces, all are very small, and interior furnishings come off as being a bit bland, with some materials not quite reflecting the price point. Visibility isn’t great, either, particularly to the rear corners, and though the dash screen is a large 8.8 inches on this model, the image shown by the rearview camera takes up barely half of it, leaving details (such as cars approaching from the sides) a bit tough to discern.

Those “elephant ear” shift paddles make manual shifting a breeze, but they block access to the turn-signal and wiper stalks. The console shift lever is a “joystick” type, where you push forward for Reverse, back for Drive, and hit a button on top for Park; not a favored arrangement. Neither is the console dial that interfaces with the non-touch dashboard screen.

A console knob and a few buttons control inputs to the non-touch screen, not an arrangement we especially like, even at its best. And this is not the best. Certainly it will become easier to use once you’re acclimated to its quirks, but that will take a while, and it’s still not as direct as some. Climate controls are more sensible, but are mounted a bit low, out of easy reach. One other oddity: While we often find front- and rear-obstacle detection systems to be overly sensitive, the Stelvio’s is both overly sensitive and overly loud — the screeching warning tones are intrusive enough that it might encourage you to shut the system off, which kind of defeats the purpose.

To be fair, many of these complaints can be leveled against other vehicles in this class, though most don’t suffer to this degree. But all that is countered by the fact that the Stelvio — even in “mere” 280-horsepower form — is a real looker, a pretty decent value, and a genuine blast to drive.

Though it has its faults, the Alfa Romeo Stelvio boasts impressive dynamics and can be had — well equipped — for a very reasonable price.