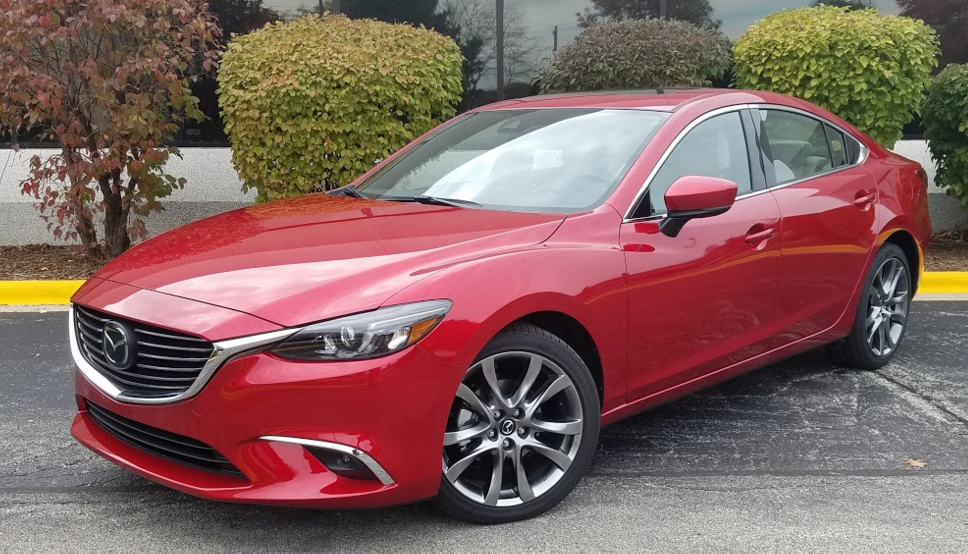 The not so good: Control interface can be confusing and inconvenient to use, ride is a bit stiff over rough pavement

Our in-depth drive report of a similar 2017 Mazda 6 i Grand Touring was published last June, but recent exposure to a slightly revised 2017.5 model revealed some additional points. We’ve also since driven 2018 models of the competing Honda Accord and Toyota Camry — both redesigned this year — to use as comparisons, and we’ll add some information about 2018 updates to the Mazda 6. 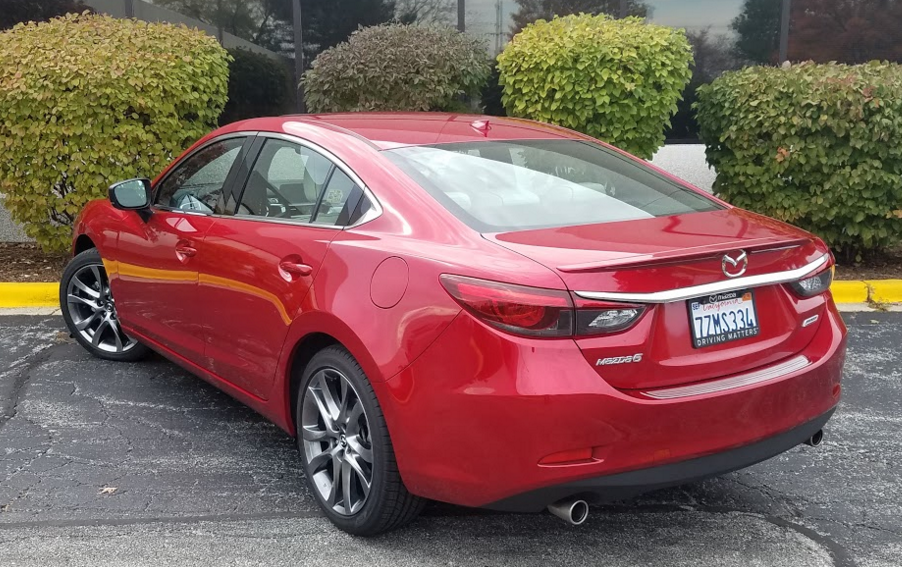 The tested top-line Mazda 6 Grand Touring rides on 19-inch wheels and adds a rear spoiler along with a host of equipment.

As before, the Mazda 6 strikes us as a sporty entry in the midsize class. That’s mostly reflected in its steering and handling feel, but also in its throttle response and interior/exterior styling.

Since handling and ride quality are generally on a teeter-totter that leans toward one side or the other, the “payback” for the top-line Grand Touring’s sporty handling is that ride quality suffers a bit over broken pavement. Part of this is likely due to its 19-inch wheels shod with low-profile tires, the latter of which have short sidewalls that don’t absorb small bumps as well. Since these tires are also standard on the mid-level Touring model, you’d have to drop down to the base Sport model to get what are likely softer-riding 17-inch tires. But then you might sacrifice some steering response, and also lose out on many of the Touring/Grand Touring’s advanced features, so that might not be a viable option. For 2018, the Mazda 6 is set to received a significant refresh, including the addition of a line-topping Signature model that will wear Nappa leather upholstery, UltraSuede trim, and unique wood accents.

There are a couple of areas where the Mazda 6 has advantages over its newer rivals. At least for the 2017.5 model tested, one is in base price. Although you can get a manual transmission in the base Sport (and the midline Touring), adding the excellent 6-speed automatic brings the 2017 Sport to $23,870 including the $875 destination charge. That’s a few hundred dollars less than the base 2018 Accord or Camry, though we don’t yet have pricing on the 2018 Mazda 6.

Its powertrain is another Mazda 6 strength, as the 184-horsepower 2.5-liter four with 6-speed automatic makes for a sporty-feeling combination. While the Camry comes with a similar 2.4-liter four and 8-speed automatic transmission — essentially breaking even in this regard — the base Accord powertrain is a 1.5-liter turbo with CVT automatic, which doesn’t offer quite the “snap” of the others. So although all of these would serve most drivers just fine, the Mazda’s might well be the best. For 2018, the Mazda 6 gains an optional 250-horsepower turbocharged version of the 2.5, which puts it closer to par with the Accord’s optional 252-horsepower 2.0-liter turbo and the Camry’s optional 301-horsepower 3.5-liter V6.

While trunk space is about the same in the three cars, the Mazda offers better functionality. All three have sickle-shaped hinges that dip into the load area, but those in the Mazda are covered to prevent damage to contents. Also — and this is notable — its rear seat backs fold nearly flat and level with the trunk floor, making it easy to slide long items forward. By contrast, the Accord’s folded seat backs rest about 3 inches above the trunk floor, the Camry’s about 7 inches. 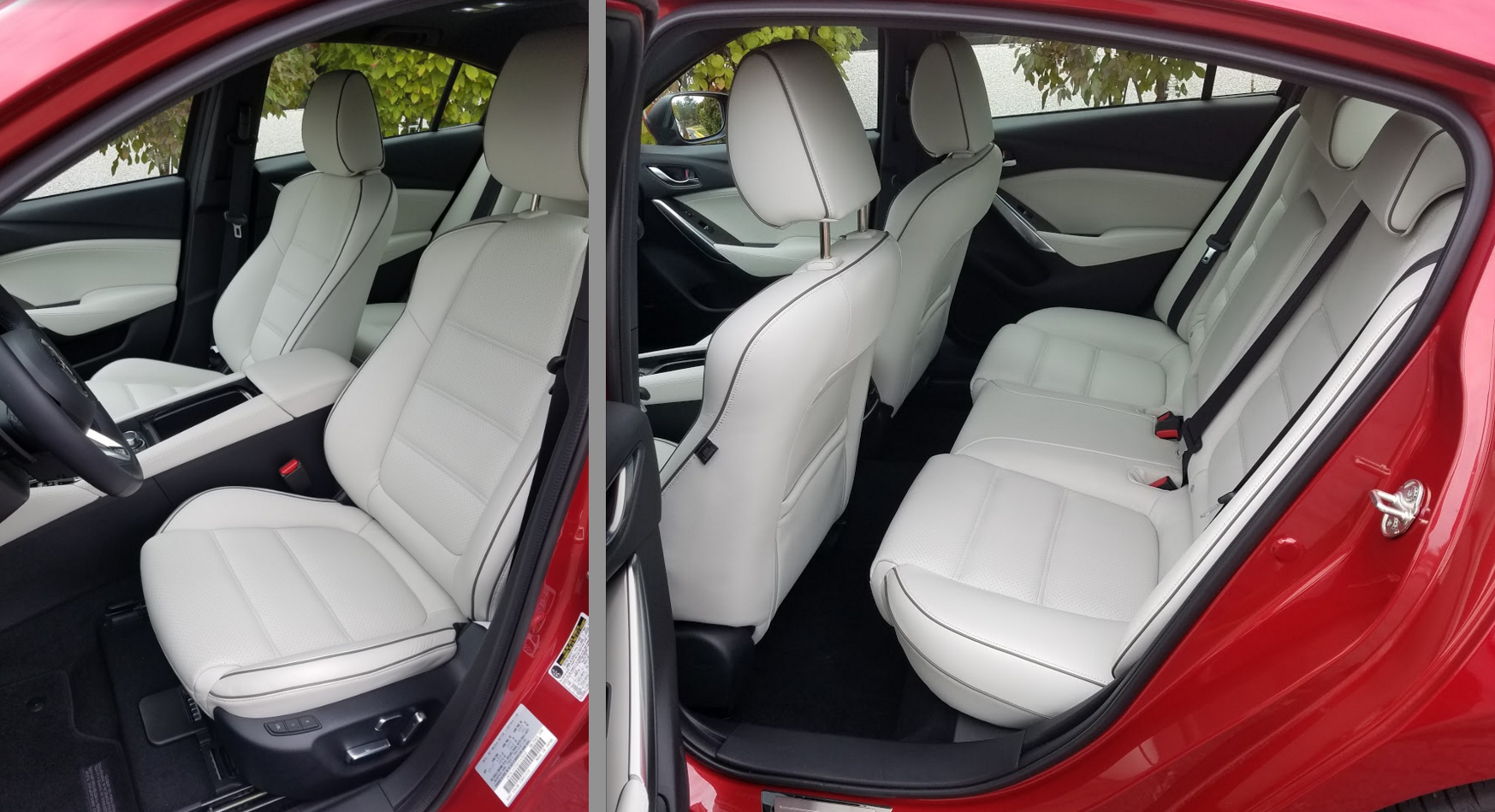 The sloping rear roofline — while adding to the car’s sporty looks — makes it tougher for taller folks to enter the back seat.

But there are also some notable areas where the Mazda 6 lags. One is in rear-seat access, where the sloping roofline that helps give the car its sporty profile limits the height of the door opening. Also, we haven’t been real fans of the Mazda Connect infotainment interface, which uses a console control knob to make adjustments on a dashboard screen, the latter of which is only touch sensitive when the car isn’t moving. Both the others have more conventional — and easier to use — controls. A point in the Mazda 6’s favor, however, is that the 2017.5 version, at least, has a CD player — something that’s being phased out of many cars. For 2018, the Mazda 6 dashboard has been restyled, but it appears the control layout remains about the same, and we don’t know whether the CD player will make the cut. What we do know, however, is that our Grand Touring test car’s head-up display, which is projected on a small screen that pops up from the dash, will move to a more conventional windshield display for 2018, and that newly available will be ventilated front seats, a 360-degree camera system, adaptive cruise control, and windshield-wiper de-icers. 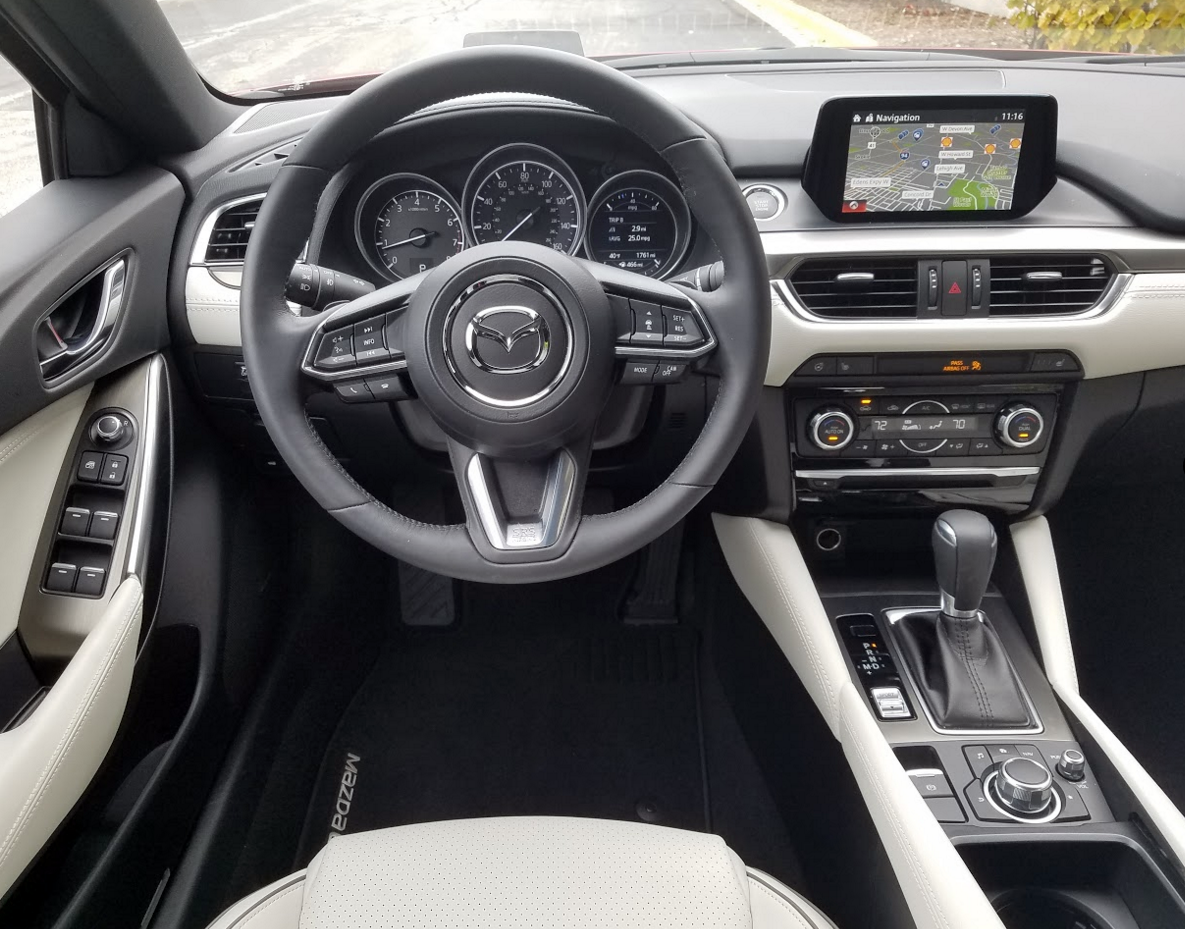 A console control knob adjusts settings on the dash-top screen, the latter of which is only touch sensitive when the vehicle is stopped. Due to the multiple steps required to perform what should be simple functions, this rates as a shortcoming in our book.

Standard high-tech safety features also differ, and who has the advantage depends on what you value most. Exclusively standard on the 2017.5 Mazda 6 are blind-spot and rear-cross-traffic alert, whereas standard on the 2018 Accord and Camry are forward collision and lane-departure warning. We don’t yet know what will be standard on the 2018 Mazda 6, so this picture may be changing.

Hopefully we’ll have a 2018 Mazda 6 to report on soon (Mazda says it’s slated to go begin arriving in dealerships this spring), but in the meantime, the 2017.5 remains a strong contender in this very competitive class.

While accounting for a mere fraction of midsize-sedan sales, the Mazda 6 has more to offer than its popularity would indicate. That may be even more true once the updated 2018 model arrives. We’ll keep you posted ….