Well into the early 2000s, Lexus vehicles still came standard with cassette players. I mention this because it’s an example of a classic paradigm clash. Almost 30 years after the first CDs were making their way into the hands of audiophiles, Lexus was still catering to conservative car shoppers who were in no hurry to replace their Robert Ludlum cassette audio books.

The history of the American auto industry is packed with similar incidents of old product crossing paths awkwardly with new trends. Did you know, for example, that the all-new 1977 Chevrolet Impala could be had with that brand’s 25-year-old straight six? This odd crossover lasted for just a few months, as a V6 became the base Impala mill for 1978.

One of my favorite bits of awkwardness goes back to 1988—the model year Chrysler chose to replace the AMC brand with Eagle.

You can read more about the Eighties AMC/Jeep/Renault roller coaster here, but in brief: Chrysler wanted Jeep, and was willing to buy all of AMC from Renault to get it.

As you might expect, Chrysler kept the Jeep product family entirely intact, while pruning from the lineup anything the company didn’t deem worthy of renaming Eagle—sort of.

This meant that the Renault-designed, Wisconsin-built Alliance and Encore were killed after the 1987 model year. It also meant rebranding a couple of cars, both of which we’ll discuss below.

The strangest holdover was the Eagle. Not the Eagle brand, the Eagle car. This old-school AMC product was beloved by (AMC) brand loyalists, but it was no longer selling in sufficient volume to warrant being updated or rebadged. The result was a strange year in branding limbo, which we’ll also cover below.

By our count, the 1988 Eagle lineup included one car with the same first and last name, one car simply rebranded from a Renault to an Eagle, and one all-new French-designed car being peddled as American. To us, that’s even more unsettling than finding a standard cassette player in a 2006 Lexus ES 330. 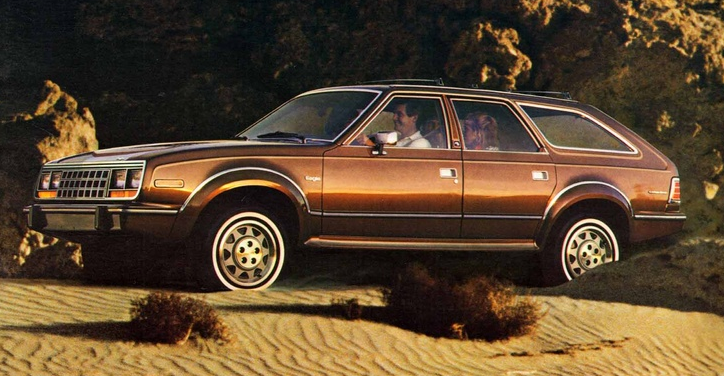 Officially the last true AMC product, the 1988 Eagle Wagon was something of a marketing conundrum. We’re not quite sure if cars were titled as Eagle Eagles, but what little advertising there was in support of this holdover model avoided the double-name trap. Ultimately, there wasn’t really much need to drag this once beloved proto-crossover into 1988, as only 2300 were built and sold. The last AMC came only in wagon guise, and only with the 258-cubic-inch 6-cylinder engine. Prices started at $12,995.

Even hardcore car guys have forgotten this short-lived Eagle-brand placeholder. Available in sedan and wagon body styles, the Medallion was built in France by Renault. The Medallion began life in 1987 branded as a Renault, but became an Eagle for 1988. After a short run of 1989 models, the Medallion was dropped from the Eagle lineup. The Medallion was offered only with a 2.2-liter 4-cylinder engine and choice of 5-speed manual or 3-speed automatic transmission. The base sedan started at $10,405.

Like the Medallion, the Premier was designed by Renault. Unlike the Medallion, Premier was built in North America, at AMC/Chrysler’s Bramalea, Ontario assembly facility. Unlike the anonymous Medallion, the Premier was well regarded by the motoring media. Consumer Guide noted at the time, “This may be the best driving, most-efficiently designed sedan in the Chrysler stable.” The Premier was offered in LX and ES trim levels, that latter of which came equipped with a 150-horsepower 3.0-liter V6 that moved the trim sedan with reasonable authority. The Premier was new for ’88 and would remain in the Eagle lineup until 1992. While the Premier never sold well, Chrysler was able to update the “borrowed” French architecture to create the LH-series Chrysler Concorde, Dodge Intrepid, and Eagle Vision. The Dodge Monaco, a mechanical clone of the Premier, was introduced for 1989. Premier prices started at $12,624.