Chevrolet has no fewer than five SUVs in its corporate lineup, yet none fit neatly into the “compact crossover” segment, currently the most popular in all of autodom. None, that is, until now. 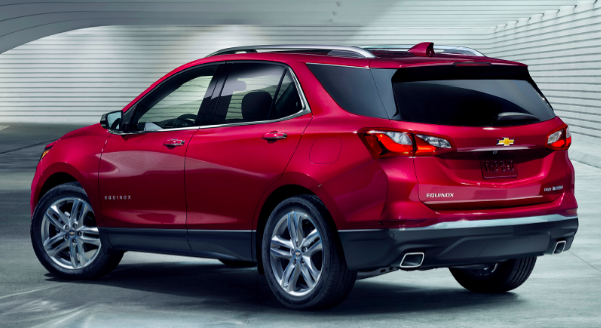 Four inches shorter and 400 pounds lighter than its predecessor, the 2018 Equinox sits at the large end of the compact-crossover segment.

Earlier this month, Chevrolet released a redesigned Equinox as a 2018 model that can rightly be categorized as a compact, though it sits at the large end of the scale. At 183.1 inches stem to stern, it’s about four inches shorter than the previous version, and right in line with the hugely popular Toyota RAV4.

What was most “compact” about the previous Equinox was the price. The base front-wheel-drive L model started at $23,995 including destination, not far out of line with smaller, “true” compacts. And that has only gone up by $480 to $24,475 with the redesign, despite the fact that it includes a number of features the old one didn’t. Furthermore, the popular LS and LT trim levels cost the same as before, starting at $26,405 and $28,540, respectively. Topping the lineup is the $31,685 Premier, which offers a number of high-end features – either standard or optionally – seldom found in the class. All models but the L are available with all-wheel drive; it adds $1750 to an LS or LT, $3645 to a Premier (as it includes a package that’s optional on the front-drive version).

Smaller size and greater use of lighter, high-strength steels combine to pare more than 400 lbs. off the Equinox, which helps justify a switch from the previously standard 182-horsepower 2.4-liter four to a newly standard 170-horsepower 1.5-liter turbo four – which is the only engine that will be offered until sometime this summer. At that point, a 252-horsepower 2.0-liter turbo is due to arrive, and shortly after that, a 136-horsepower 1.6-liter turbodiesel should join the line as one of the first diesels in the segment. (Mazda is also slated to offer one.) When fitted with the 2.0-liter turbo, Equinox is rated to tow 3500 lbs.

While there’s no wood trim or as many padded surfaces inside as in some competitors, available two-tone combinations help give the interior an upscale look.

Even the base L comes quite well equipped. It carries most expected features plus a 7-inch touchscreen, Apple CarPlay/Android Auto, GM’s OnStar assistance system with 4G LTE WiFi hotspot, rearview camera, heated mirrors, keyless entry and starting, 17-inch aluminum wheels, and Teen Driver, which allows parents to track their kid’s driving behavior. However, it comes only in front-drive form and offers no options.

Next up is the LS, which adds a spare tire (replacing an inflation kit), a compass, and floor mats. The only option is a 5-digit keyless entry keypad ($155) that allows access to the vehicle via a programmable code.

What we drove at the Equinox press preview in the Carolinas was a top-line front-drive Premium with the 1.5-liter turbo and Confidence & Convenience II Package along with $995 Iridescent Pearl paint, the total coming to just under $34,600.

With popularity comes competition, and nowhere is it more intense than in the compact-crossover class. So how does the new Equinox stack up against its rivals? 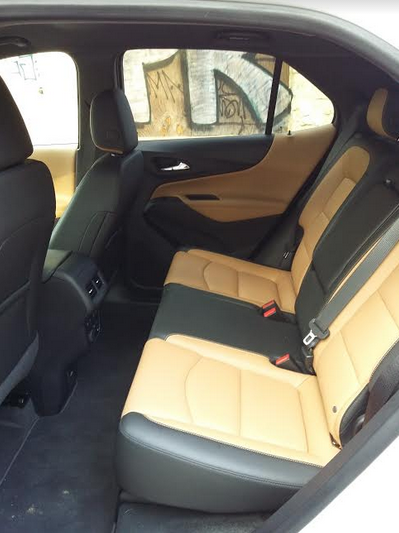 There’s generous legroom in back and decent headroom, but some might find the seat backs too reclined for best comfort.

As it’s on the larger side for the class, passenger and cargo space rank as plus points. A huge amount of front headroom and especially legroom can be summoned, and even with the front seat all the way back, there’s enough rear legroom for an average-size adult. However – at least in the sunroof-equipped model we drove – rear headroom might be tight for 6-footers, which isn’t the norm for the compact-crossover class. Also, the rear seat back rests in a somewhat “laid back” position that some might find to be too reclined.

Cargo space is both large and versatile. Folding the rear seat backs – which can conveniently be done with levers on the seatbacks themselves and on the rear cargo wall (at least on our Premium test vehicle) – results in a long, flat load floor, and there’s a huge amount of hidden storage beneath the floor. There’s also a good amount of stash space in the cabin, highlighted by a moderate-size glovebox, large console box with two USB ports, a large forward console bin with Aux/two USB/12-volt jacks, and handy (not to mention unusual) umbrella coves in the front doors. 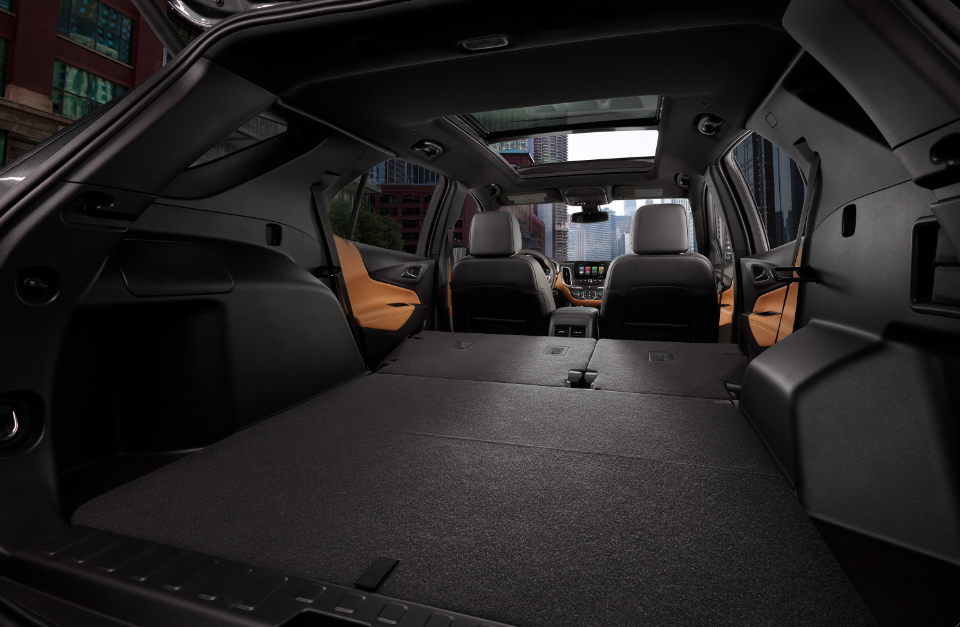 Folding the rear seat backs creates a large, flat-floor cargo area, and there’s a lot of “hidden” space under the cargo floor.

Audio systems differ depending on trim level – and thus, so might their layout – so this may only apply to the one in the Premier we drove. There’s only a volume knob and a couple of physical buttons below the 8-inch touchscreen, with everything else being done through “virtual” buttons on the screen. That often means drilling down through multiple layers to get where you want – something that tends to take more study and a longer look from the road – but it’s not as complicated here as in some. Climate controls consist of rotary temperature and individual mode buttons (nice), but repetitive-step buttons for fan speed (not as nice).

As mentioned, the new Equinox offers some uncommon luxury and “tech” features for the class, and our test Premier had ‘em all. Several in the former category dealt with the seats. Both the driver and front passenger seats had heat, ventilation, and adjustable-tilt cushions – a rare combination for the class – and even more unusually, they both had power lumbar adjustment. Outboard rear seats were also heated, as was the steering wheel.

While interior materials look fine, close study reveals that only the dash face (not the top) is padded, and padding on the door tops (rear only, where you rest your elbow) and armrests is very thin. One of the Premiers we drove had a black/tan two-tone combination that gave the cabin a richer look.

Visibility was a sore spot with the previous Equinox, and though it seems better in this one, it’s still not great. Thickish front and side roof pillars block some of the front-corner and over-the-shoulder view, and only a small quarter window relieves what would otherwise be a huge rear-corner blind spot. A rearview camera is standard, but it only “sees” in about a 140-degree arc (the best give a 180-degree view, which allows seeing both ways down a parking-lot aisle). Cameras providing a full 360-degree view are available, but they only display the area right around the vehicle.

If the Equinox has a weak link, it’s the powertrain. While the little 1.5-liter turbo is decently peppy (Chevy says 0-60 mph comes up in a reasonable-for-the-class 8.0 – 8.5 seconds), it suffers the same full-throttle, off-the-line “laziness” as most others of its ilk. Perhaps adding to this demerit is the standard Stop/Start system (which shuts the engine off at stoplight), though it’s fairly unobtrusive and quick to re-start. But perhaps the bigger problem we noticed is that the 6-speed automatic transmission seemed reluctant to downshift when the throttle was stabbed at speed – either partway or foot to the floor (which isn’t the norm with GM’s automatics), though after the downshift finally arrived, there was a decent amount of passing power. Note that this is something that may get “recalibrated out” at some point (we’ll see if local test vehicles behave any better), and that the upcoming 2.0-liter engine will be mated to a 9-speed automatic, a combination that should – at the very least – bring a stronger off-the-line burst.

With the subcompact Trax below it and the midsize, three-row Traverse above it (and the large Tahoe and even larger Suburban above that), Chevy now fields an SUV lineup that pretty much spans the size spectrum. In fact, the only sliver not covered is that of a two-row midsize SUV. But with the new Equinox sitting at the large end of the compact class, it essentially gives Chevy a very attractive “bridge” that could satisfy buyers from both of these popular classes.

Chevrolet’s redesigned 2018 Equinox fares well for space, equipment availability, and value. A stronger 2.0-liter turbocharged engine due this summer could add “performance” to that list.