Subaru’s first plug-in hybrid will be making its public debut at the 2018 Los Angeles Auto Show. Based on the Crosstrek compact crossover that was redesigned last year, the Hybrid (Subaru doesn’t include “Plug-In” in the official name, but it does on the car’s badges) pairs a 2.0-liter flat-four engine with two electric motors. One of the motors is used to start the engine at stops and as a generator to recharge the lithium-ion battery, the other to help power the car and charge the battery under braking. As with the “regular” Crosstrek, the Hybrid comes standard with all-wheel drive, making it one of the few all-wheel-drive hybrids — and one of the least-expensive AWD plug-in hybrids — on the market. 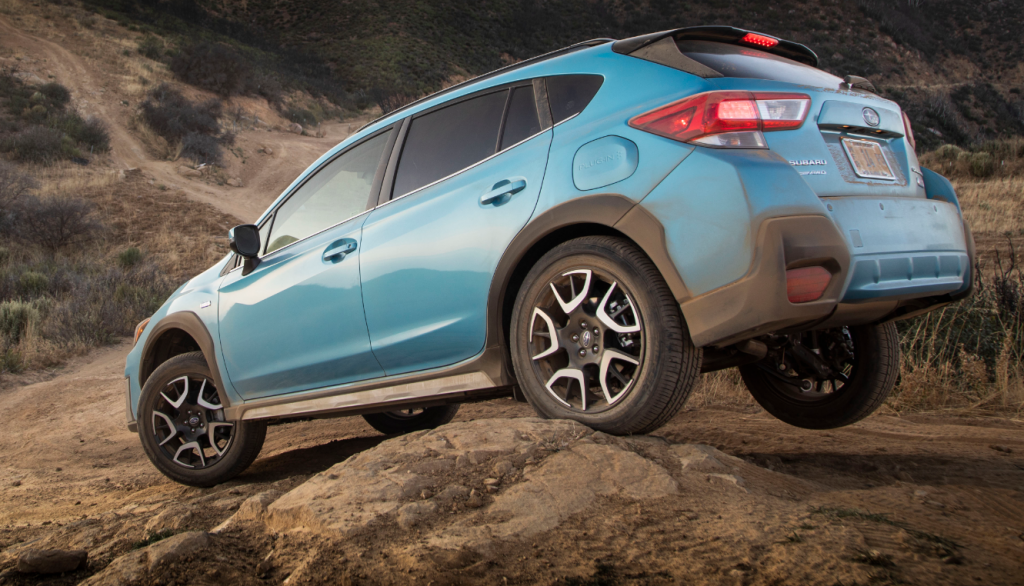 Subaru says the Hybrid is one second quicker from 0-60 mph than the regular Crosstrek, can travel up to 17 miles on electric power alone, and earns an EPA-estimated 90 MPGe rating. Subaru also says the Crosstrek Hybrid qualifies for High Occupancy Vehicle (HOV) permits in many states, including California, Maryland, and New York.

Exclusive to the Hybrid is the Lagoon Blue Pearl paint shown above, one of four available colors. The Hybrid also gets a distinctive Gray and Navy Blue interior and some unique exterior trim. A host of features are standard, including exclusive Remote Climate Control (which allows the owner to activate the car’s climate control remotely without having to start the engine) and Remote Battery Charging Timer, allowing a user to manage when the plug-in charging is activated to control charging costs.

The Crosstrek Hybrid is due on sale at the end of this year at a starting price of $35,970 including the $995 destination charge.

Subaru tried a Crosstrek Hybrid before, and it didn’t go over all that well. But this is a plug-in hybrid with greater capability — including a reasonable all-electric range — and the fact it will give owners access to HOV lanes is a bonus. And since Subie buyers tend to be “green” conscious and this is one of the few plug-in hybrids offering all-wheel drive — and at a reasonable cost — we think this will be far more successful than its “plain ol’ hybrid” predecessor.