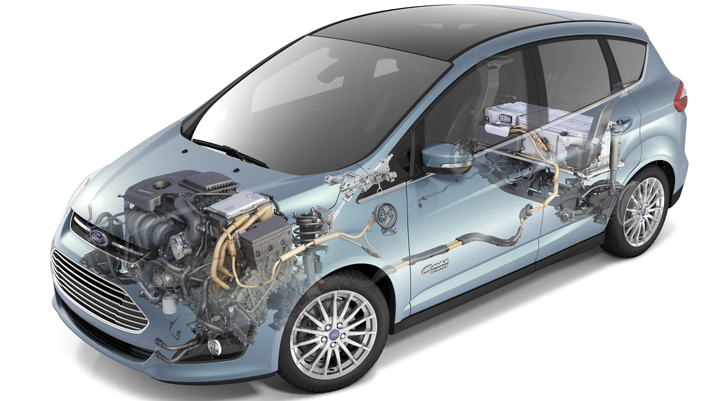 Inner workings of the Ford C-MAX Energi. Its “plug-in” battery is the silver box between the rear wheels.

In a previous post, we discussed the meaning behind MPGe ratings—which, essentially, are given to any vehicle that plugs into an outlet to recharge its battery. These vehicles are either all electric, such as the Nissan Leaf, or have both electric and gasoline powertrains, such as the Chevrolet Volt. In both cases, the cars can be driven a fair distance on just electric power. What is MPGe?

One element brought up in the last post was that the “e” in MPGe stands for “equivalent,” and it’s based on the equivalent energy content of gasoline compared to electricity. The ratio that has been determined is that a gallon of gas contains the same amount of energy as 33.7 kilowatt-hours (kWh) of electricity. Keep that 33.7 number in mind.

The Nissan Leaf has a 24 kWh battery and can go about 73 miles on a full charge. According to the comparison above, that 24 kWh battery contains the energy of only about three-quarters of a gallon of gas. If we were looking at that in terms of a conventional EPA rating, it would equate to roughly 99 mpg. And that’s exactly the combined MPGe figure that’s on the Leaf’s window sticker.

But how does the Leaf manage to get the equivalent of 99 miles per gallon?

The answer has to do with efficiency. While a rather small part is attributable to better aerodynamics and lower rolling resistance, by far the most comes from the increased efficiency of the electric motor itself.

A traditional gas-powered engine is really rather wasteful. Most are only about 25 to 30 percent efficient, with another few percent being lost through the multi-speed transmissions required to make them function in a vehicle. So let’s use 25 percent for comparison purposes.

What that 25 percent means is that only a quarter of the energy in a gallon of gas is being converted into rotational force used to drive the car. The rest is lost to heat and internal friction. In most cases, a conventional engine is more efficient at producing heat than it is at producing rotational force. Much of the heat goes out the exhaust, while most of the rest is absorbed by the car’s cooling system—which is necessary to keep the engine from overheating.

Now let’s look at electric motors. Those used in cars are typically at least 90 percent efficient at turning electrical energy into rotational force. Very little energy is turned into heat, so they don’t need a cooling system.

Based on this comparison, if you took that same Nissan Leaf and gave it a conventional gas powertrain of the same weight as the electric one, you’d likely end up with a car that got about 27.5 mpg. If that seems low, it’s largely because the electric powertrain in the Leaf (electric motor, battery, and controller) weighs more than a comparably powerful gas powertrain, and that cuts mileage significantly.

Another strength of an electric motor is that it produces its full amount of power as soon as it starts to turn, and power doesn’t drop off significantly until it’s turning really fast. By contrast, a gas engine produces very little power at low speeds, and typically has to be spun very fast to make its maximum amount of power. That’s one reason most cars have multi-speed transmissions, as it allows the engine to run only as fast as it needs to in order to produce the amount of power required.

Due to the wide power band of an electric motor, electric cars need only a one-speed transmission; essentially, direct drive to the wheels. Aside from less power loss, this means you never have to wait for the transmission to downshift when you need more power. And that instant response to throttle inputs is one of the most satisfying dynamic aspects of an electric car.

There is one downside to the electric motor’s efficiency, however. Because it produces virtually no heat on its own, the car’s heater has to be electric as well. And when it’s in use, it drains power from the same battery used by the electric motor to propel the car. As such, electric cars lose much of their range—roughly 30 percent—when driven with the heat on full blast in cold weather.

The biggest problems with electric cars are limited range and the time it takes to recharge their battery when it’s drained. That’s why many cars use both electric and gas powertrains. It gives them the benefits of electric drive for short distances, coupled with the long range and quick refueling benefits of a gas powertrain for longer distances. Often referred to generically as Plug-in Hybrid Electric Vehicles (PHEV), their biggest problem is that the cars are burdened with the weight—and expense—of two powertrains. But because these cars strike a good balance in terms of drivers’ needs—and because they benefit from the continual advances in both gas-engine technology and battery technology—many experts feel that PHEVs are perhaps the best answer for the long haul.

And that would mean those stratospheric “MPGe” ratings would become all the more common—and significant.

Window sticker of the Nissan Leaf