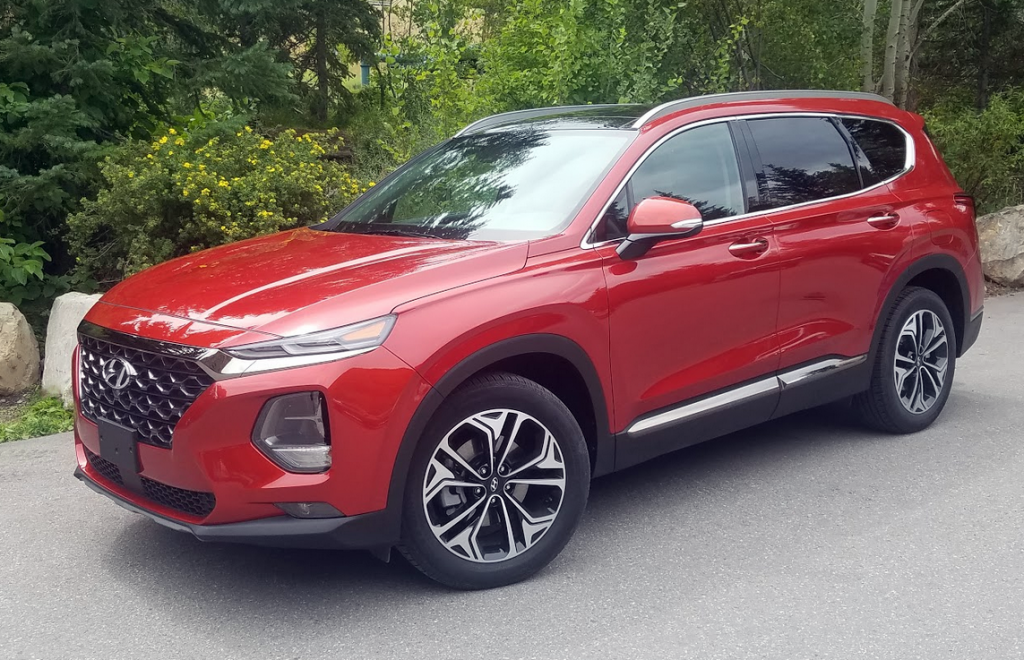 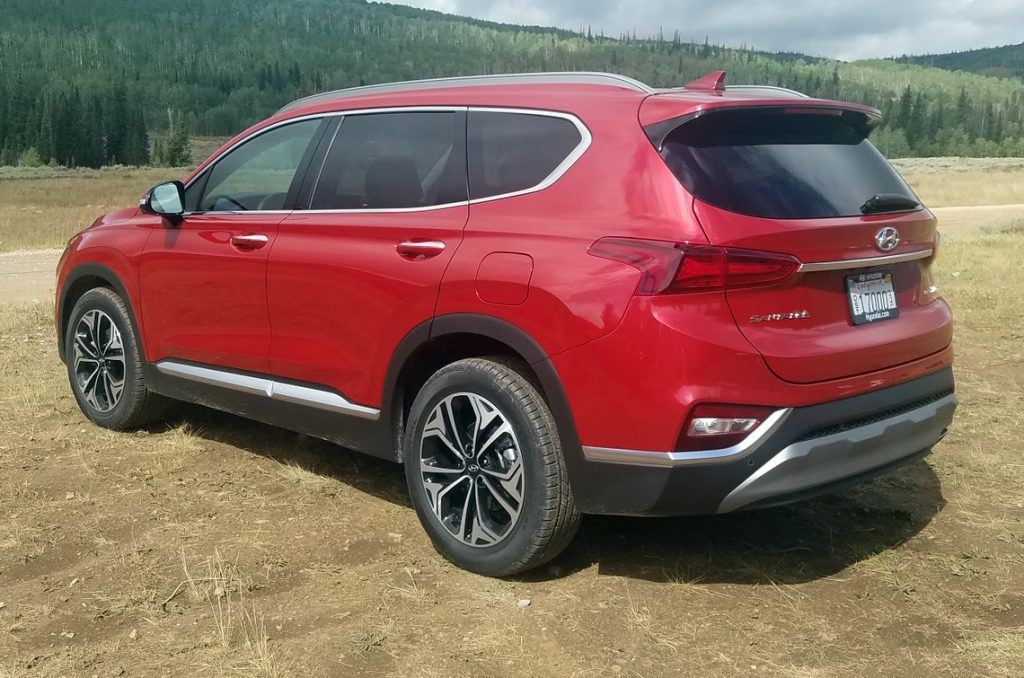 Hyundai aimed for a more traditional SUV look with the design of the 2019 Santa Fe. This is a top-line Ultimate 2.0T all-wheel-drive model, which comes standard with 19-inch alloy wheels, full LED lighting, and a panoramic sunroof.

Compared to the Santa Fe Sport, the redesigned Santa Fe grows 2.8 inches longer overall, 2.6 inches longer in wheelbase, and about a half an inch in width and height. These overall dimensions are very close to key 5-passenger rivals, such as the Ford Edge, Nissan Murano, Subaru Outback, and the soon-to-arrive 2019 Chevrolet Blazer. The 2019 Santa Fe launches as a 2-row, 5-passenger model, but a turbodiesel version with an exclusive “occasional use” small third-row seat is scheduled to be added later in the model year.

That Santa Fe’s dashboard layout is practical and attractive, with well placed, easy-to-use controls. Passenger room is generous in both the front and rear seats; the rear seats slide fore and aft, and their seat backs recline.

After 15 Years, The Chevrolet Blazer Is Back 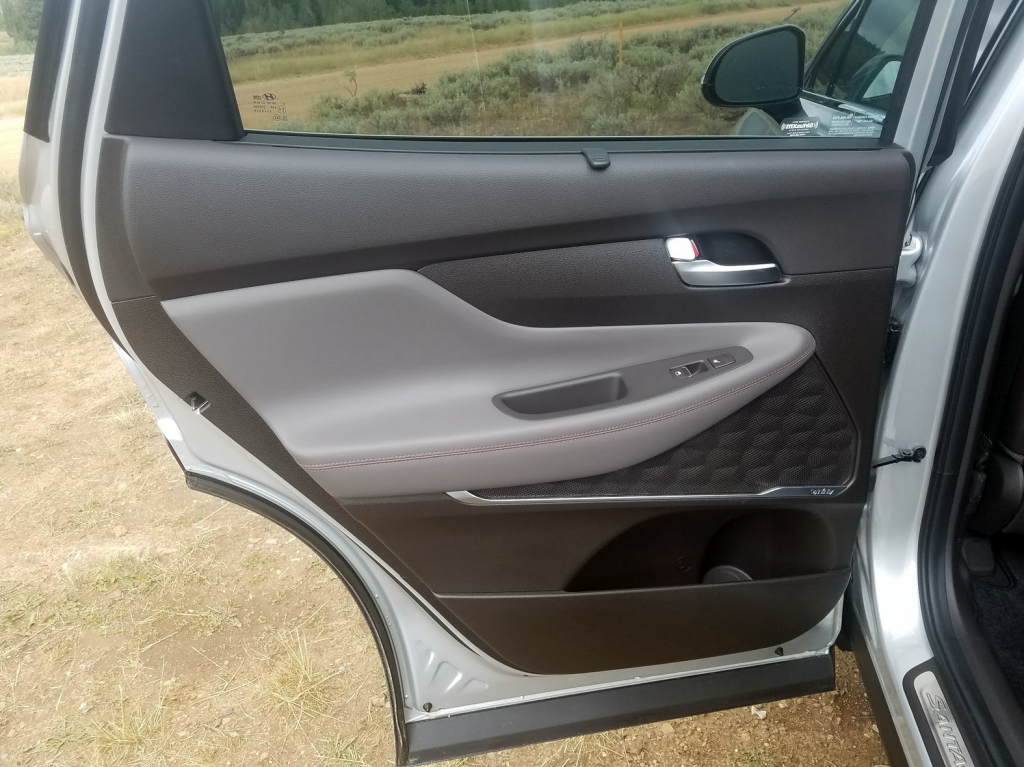 The standard engine on all models is a 185-horsepower, 2.4-liter 4-cylinder; optional on Limited and Ultimate models is a 235-hp, turbocharged 2.0-liter four. These basic engines are carried over from the Santa Fe Sport, but both are updated with new electronically controlled continuously variable valve timing technology (E-CVVT) and are paired with a new 8-speed automatic transmission in place of the previous 6-speed automatic. A fuel-saving engine stop/start system (which Hyundai calls Idle, Stop & Go) is standard on both powertrains.

All Santa Fes are available with front-wheel drive or Hyundai’s HTRAC all-wheel drive system (which adds $1700 regardless of model). HTRAC has predictive capabilities; it processes real-time data from 50 input sources—such as driver throttle pressure, engine speed, yaw rate, and outside temperature—100 times per second to calculate the torque split. The system can send up to 50 percent of the engine’s torque to the rear axle.

The Santa Fe offers a respectable 35.9 cubic feet of cargo volume behind the second-row seats, as well as some handy underfloor storage bins under two lift-up panels in the rear cargo area.

Also included in the Smart Sense suite is a new feature Hyundai calls Safe Exit Assist. The system uses radar to detect vehicles approaching from the rear, and prevents the driver from deactivating the child-safety looks if an oncoming vehicle is detected. If the rear door is already open when a rear-approaching vehicle is detected, the system emits a visual and acoustic warning to warn the occupants. 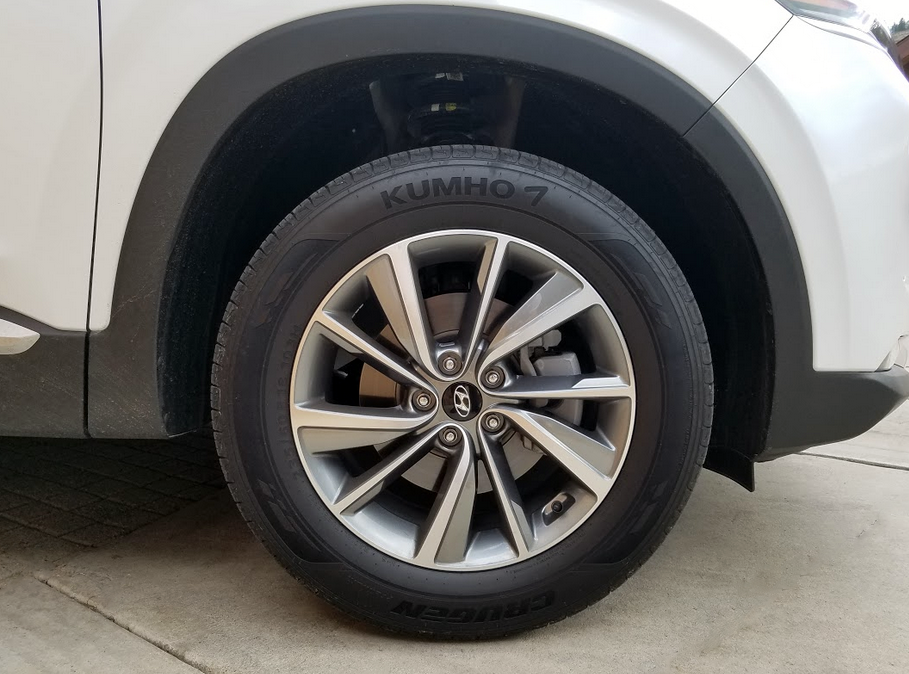 The SEL Plus, Limited, and Ultimate add a parking-distance warning system with rear automatic braking, as well as another new safety feature: Rear Occupant Alert. Like similar systems from other manufacturers, Rear Occupant Alert reminds drivers to check the rear seats when exiting the vehicle via an instrument-panel message, but it goes a step further by using an ultrasonic sensor that can detect the movement of children or pets in the back seat. If movement is detected in the back seat after the driver has left the vehicle, the system will honk the horn and send email and text-message alerts via the Hyundai Blue Link Connected Car system.

Hyundai executives say this standardization of safety features will spread to the rest of its model lineup, and we applaud the move. Honda and Toyota have been following a similar strategy by making their respective Honda Sensing and Toyota Safety Sense P technologies standard equipment on most of their vehicles. Not all manufacturers do this: GM, for instance, continues to restrict many of its active safety features to high-end trim levels.

In developing the new Santa Fe, Hyundai designers excised some of the “minivan-esque” cues of the Santa Fe Sport and aimed for a beefier, “pure SUV” look. The front end is dominated by Hyundai’s Cascading Grille design, a motif that debuted on last year’s refreshed Sonata midsized sedan and Elantra GT compact hatchback. Similar to the recently introduced Hyundai Kona subcompact SUV, the Santa Fe uses Hyundai’s Composite Light arrangement; the top-mounted narrow-slit lights are daytime running lamps; the headlights themselves are mounted below.

We attended a preview test-drive event for the new Santa Fe in Park City, Utah, where we got ample seat time in an all-wheel-drive Ultimate 2.0T model and also took a brief spin in a 2.4-powered front-wheel-drive SEL Plus.

In either of those trim levels, the Santa Fe makes a fine first impression. The exterior styling is distinctive without being overwrought, and the interior layout is practical without being boring. Out-of-the-ordinary trim choices add a bit of visual interest to the cabin: the headliner and sunroof shade have a unique heather-fabric pattern, the speaker grilles sport a 3D texture inspired by orthographic maps, and the marble-look trim inserts are a refreshing break from the typical woodgrain. The leather upholstery of the Limited and Ultimate models is naturally the most luxurious, but the cloth seats of lesser trim levels have an attractive look and feel as well. 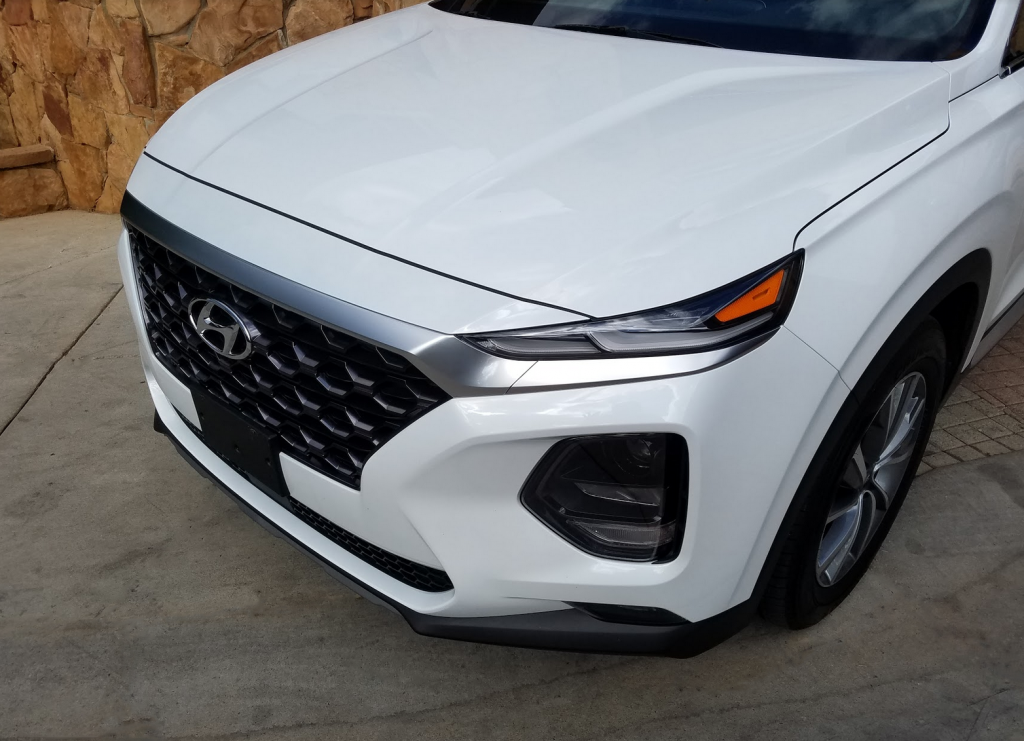 Hyundai made visibility a priority with this redesign. The beltline is lower in both the front- and rear-seat areas, which provides a more open feel, especially for small passengers. The rear window glass is generously sized, for a good, relatively unobstructed view out the rearview mirror. And, the rearview-mirror mounts have been relocated to the doors, thus freeing up a helpful triangle of front-door-window real estate and improving visibility to the front corners.

Front- and rear-seat space is on par with most class competitors, which is to say it’s ample for all but very large folks. The tallish body build makes for easy step-in/step-out entry and exit, and the rear seatbacks recline to free up even more headroom for tall passengers. The rear seats also slide fore and aft a few inches, but we don’t see them spending much time in anything but the “all-the-way-back” position in these two-row models.

The dashboard layout is clear and intuitive. Controls are straightforward and user-friendly for the most part, and there are some handy small-items storage solutions. We especially liked the handy trays both fore and aft of the shift lever and cup holders, and the slim shelf built into the passenger side of the dash, above the glovebox. All of these spots are large enough to stash a smartphone.

Storage space for bigger stuff is class-competitive as well. The Santa Fe’s cargo volume measures 35.9 cubic feet behind the second-row seats, and 71.3 cu. ft. with the rear seat backs folded, which is right in the wheelhouse of most two-row rivals. There’s also a generous amount of storage space behind the rear cargo floor.

A hands-free “smart” liftgate is standard on SEL Plus models and above; it beeps and then opens automatically if you’re standing at the rear of the vehicle with the key fob in your pocket for three seconds. The upside of Hyundai’s arrangement is that no foot swipe is necessary to open the gate. The downside is unwanted activation, since the process starts if you’re at the back of the vehicle for any reason for three seconds. We’ve often been annoyed by the beeping when we don’t want the tailgate to open, and we have to move away quickly to cancel the process.

Ride quality is notably better than the outgoing Santa Fe Sport. Our test vehicles remained composed and absorbent over most of the bumps and pavement imperfections on the Utah roads we traversed, and even though we encountered some nasty washboard-surface gravel roads that rattled our teeth, the Santa Fe at least remained stable and controllable. Improved body-structure procedures—including an increased amount of high-strength steel and structural adhesives used in the assembly process—have resulted in a 15.4 percent increase in structural stiffness. And, despite its generous level of standard equipment, the Santa Fe is one of the lightest vehicles in the midsize SUV class, with a base curb weight of 3591 pounds. 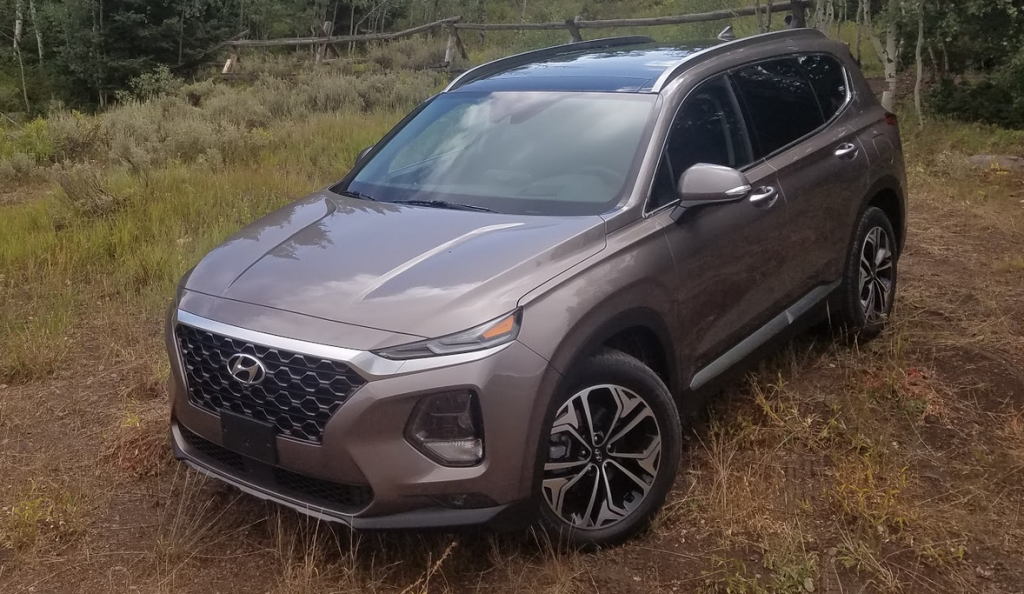 The Santa Fe’s HTRAC all-wheel-drive system is a $1700 option on any trim level. It’s a predictive system that can send up to 50 percent of the engine’s torque output to the rear axle as driving/traction conditions warrant.

The Santa Fe is noticeably quieter than before as well. NVH-reduction measures have been improved, and they include the increased use of sound-absorbing materials and more laminated glass. Wind and road noise are nicely muffled; we noticed only a bit of intrusion from the engine note during fast acceleration.

From a handling standpoint, the Santa Fe doesn’t stand out from its class competitors, but neither is it subpar. There’s an average amount of body lean in fast corners, and the steering and braking feel are smooth and predictable. The Drive Mode Select system (standard on SEL and above models) includes a Sport Mode that adds a bit more “weight” to the steering feel, which some drivers might prefer.

Powertrain performance is something of a mixed bag. We spent the bulk of our drive time with the 2.0T engine, and while it delivers more-than-sufficient power overall—even in the high-altitude, steep-grade environs of our test drive—there is a frustratingly lackadaisical response upon initial throttle application. It’s especially apparent when pulling away from a stop, but it happens at speed as well—say, when you want to accelerate to pass a vehicle on the highway. This is probably a combination of turbo lag, the 8-speed transmission, and throttle-pedal tuning; the power eventually comes, but it often takes its sweet time.

The naturally aspirated 2.4-liter base engine has a more linear feel than the turbo, but its 50-horsepower deficit is apparent. It’s fine in around-town driving, but it struggles to provide decent acceleration up steep grades, or for highway passing maneuvers.

Still, even with its powertrain shortcomings, the 2019 Hyundai Santa Fe is a well-rounded contender that boasts plenty of virtues. Chief among those are competitive pricing, the generous list of standard safety gear, a nicely finished interior, and pleasant road manners. The model lineup changes for 2019 may be a bit complicated, but the Santa Fe’s value proposition isn’t. 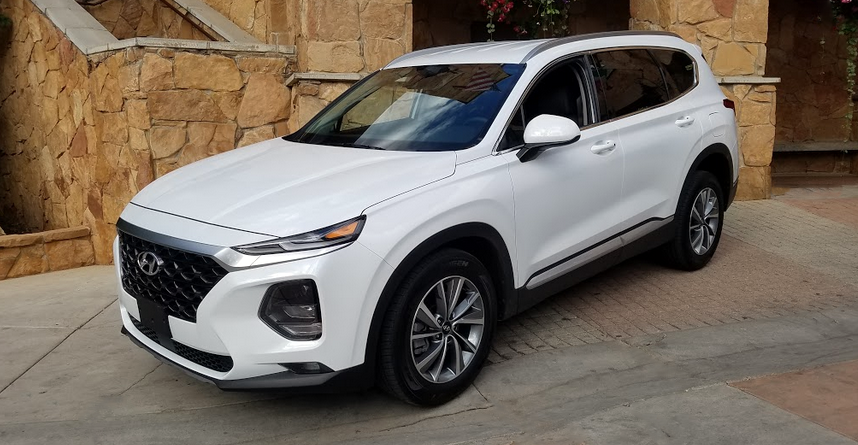 Hyundai expects the popularly equipped SEL Plus model (shown) to be the volume leader of the 2019 Santa Fe lineup.