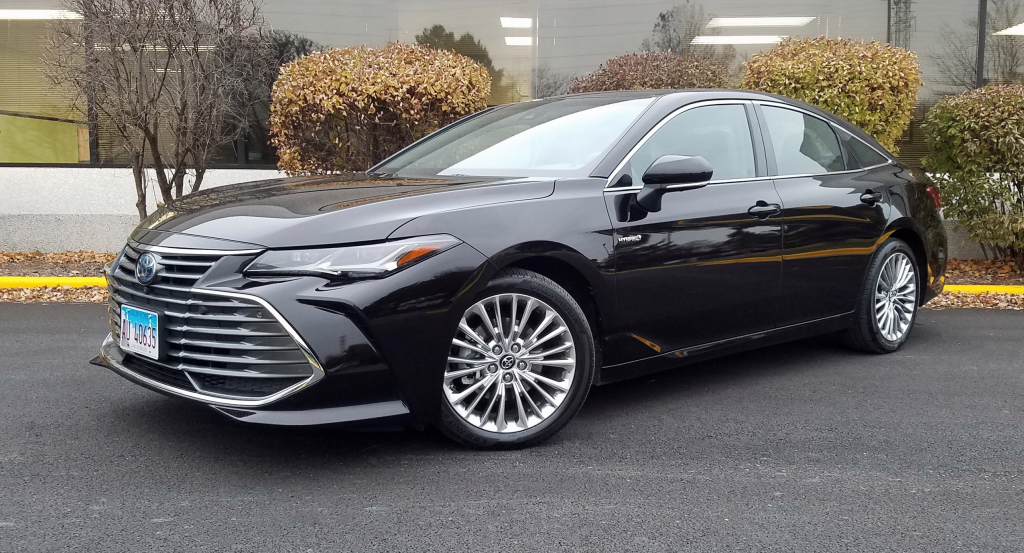 The not so good: Rear-seat room could be a little better

The last time Consumer Guide tested a 2019 Toyota Avalon, your humble servants felt compelled to mention the Japanese automaker’s continuing devotion to sedans in the face of the market’s seeming tidal shift to crossover SUVs. This time we’re taking note of Toyota’s commitment to hybrids, and that is embodied in the Avalon too. 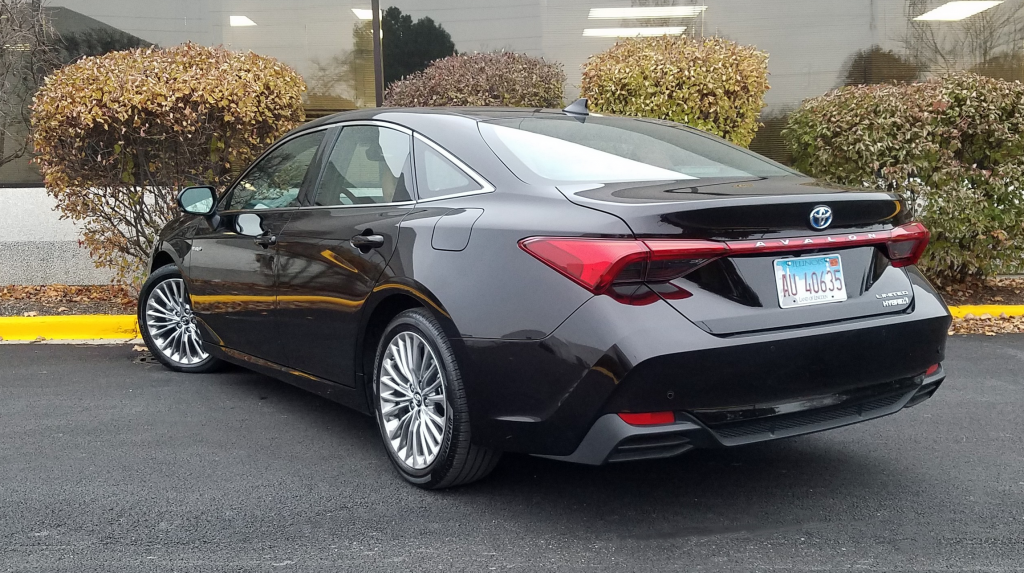 Though it looks almost black on overcast days (such as when these photos were taken), the Opulent Amber metallic paint color of our test vehicle takes on rich “maple syrup” tones in direct sunlight.

Toyota is, after all, the manufacturer of the Prius, which as much as any car made the gas/electric hybrid a familiar part of the twenty-first-century automotive landscape. But the company’s use of the technology didn’t get pigeonholed in one vehicle line. Not only are there hybrid models in other Toyota car and SUV series, there are multiple choices within those ranges. Consider that for 2019 you can find hybrids in four trim levels of both the Highlander and RAV4 sport-utilities, three kinds of Camry midsize sedan, and another three Avalon large sedans.

CG tested an Avalon Hybrid Limited, which is the costliest of all Avalons. Starting at $43,795 with delivery, it is $1000 dearer than a gas-V6 Limited and outranks the sport-oriented gas-only Touring by $600. The 2019s mark a new generation of the nameplate. They’re longer, lower, wider, and roomier than before, with new styling that some people like . . . and other people don’t.

The Avalon interior boasts attractive styling and upscale materials and trim details for a mainstream-brand car. Our test vehicle was finished in Cognac leather trim.

As hybrid vehicles go, the Avalons (there are XLE and XSE versions as well) emphasize fuel economy over speed, which isn’t always the case. The powerteam consists of a 2.5-liter 4-cylinder gas engine combined with an electric motor for a system total of 215 horsepower, 15 more than previously. A continuously variable automatic transmission directs power to the front wheels. 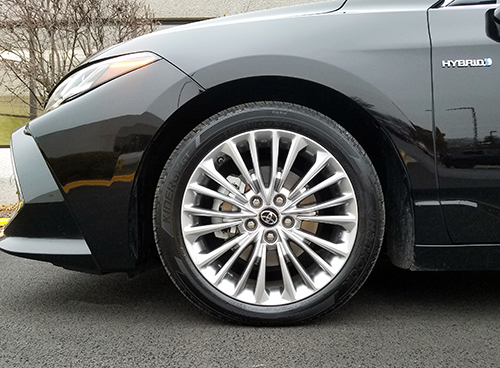 Power delivery is sufficient for easy and confident driving in just about any situation, but “spirited” it’s not, even in “Sport” mode. CG testers averaged 40.6 mpg with a slight majority of city driving—a bit below the EPA estimates (a fixed 43 mpg in city, highway, or combined driving). “ECO” and “EV” modes—the latter for brief bursts of fully electric operation—are available to help drivers retard their fossil-fuel use. The transitions between gas and electric operation are virtually seamless.

Regenerative braking is part and parcel of hybrid driving, and leads to a bit of drama when stopping. In the Avalon brake response is a little late coming in—drivers really need to get the pedal down. Otherwise, the big Toyota handles easily, with a pleasing added degree of steering heft in Sport.

Passenger room and comfort are comparable to that of the V6 cars, though there is a 0.4-inch reduction in rear headroom in the hybrid. It’s also a little less welcoming to three-abreast rear seating—it’s not impossible, but the shape of the floor tunnel makes it just a little harder. Ingress and egress are easy, and while thin front and rear roof pillars aid driver vision, thicker center posts reduce the view somewhat. The Avalon is one hybrid that doesn’t surrender any trunk space—which is ample—or cargo-carrying flexibility. Rear seats fold in a 60/40 split, resting a few inches above the plane of the trunk floor.

Toyota is staking itself out to remain a full-line producer of motor vehicles—in both motors and vehicles. The hybrid Avalon sedan is clear proof of that.