It can be a tricky quest for a company: How to attract new customers without alienating the old. And in this case, “old” has kind of a double meaning.

According to Toyota, the average Avalon buyer is 66 years of age. That’s rather high for an automotive model, even a moderately priced full-size sedan like the Avalon. Which means that an obvious avenue for increasing volume would be to attract a younger audience. And that’s what Toyota has aimed to do with the redesigned 2019 Avalon, due on sale in mid May.

Certainly that means offering the latest high-tech gadgets – which may not be of much interest to older buyers and may actually turn them off – and also giving the car a trendier look – again, something that might not appeal to all generations.

Toyota splits the Avalon into two distinct trim-level camps, each with a distinctive face. Representing the “luxury” side are the base XLE and upscale Limited, which get a dark grey grille with chrome surround (left), while the “sporty” XSE and Touring get a black lattice grille.

Toyota has been veering off its traditionally conservative path of late by bringing out cars with what the company admits are more polarizing designs. And that continues with the new Avalon, which shows off swooping side sculpturing, a steeply raked rear window, and a huge, gaping-mouth grille, the latter a further progression – and seemingly, the final one (because, really, can it get any bigger?) – of a styling trend that began much more subtly a few years ago. Beyond that, the new Avalon is a bit longer, lower, and wider than before, with a longer wheelbase and shorter front and rear overhangs, all to give it a more aggressive look.

Besides a bolder grille, the Avalon gains swoopy side sculpturing, a sharply raked rear window, and full-width LED tail lights, all in an effort to give it a more “youth-oriented” appearance.

But whereas the Camry comes standard with a 4-cylinder engine, the Avalon comes standard with the 301-horsepower 3.5-liter V6 that is optional on the Camry. That rating is up by 33 over that of the 2018 Avalon, with an 8-speed automatic replacing a 6-speed. Carried over are Hybrid models that use a 2.5-liter four paired with an electric motor to produce a combined 215 horsepower. EPA estimates are up across the board, with the base V6 earning a 22 city/32 highway/26 combined rating, while the Hybrid comes in at 43/44/44. High-end versions of both are about 1 mpg lower.

Speaking of trim levels, the Avalon comes in four gas and three hybrid versions that are divided into “luxury” and “sport” offerings. On the luxury side are the base XLE and high-level Limited, while the Avalon’s sporty side is represented by the XSE and top-line Touring, the latter not offered as a hybrid.

The luxury Limited is the only model offered with this Cognac two-tone color scheme, though other two-tones are available. Notable (at least to passengers) is that both front seats in the Limited boast 4-way adjustable lumbar support.

Switching over to the “sport” side is the base XSE ($38,895), which adds to the base XLE quad chrome exhaust tips, 19-inch wheels (vs. XLE’s 17s), paddle shifters, power moonroof, Qi wireless charging, Ultrasuede seat inserts, and aluminum interior trim to replace the XLE’s woodgrain.

Hybrid models return, this time with a folding rear seat back (previously not possible) and the same trunk space as gas models.

All three of the above models are offered in Hybrid versions for $1000 more, that – notably for 2019 – have their battery beneath the rear seat rather than behind it, leaving them with the same fold-down rear seat back and trunk capacity as their gas counterparts.

Topping the roster – and also on the sporty side – is the $43,095 Touring, which adds to the XSE essentially the same features as the Limited adds to the XLE plus an adaptive variable suspension and sport-tuned exhaust.

Step inside the Avalon, and you’ll find that visibility is good front and rear thanks to thin roof pillars, though less so to the sides due to thicker ones. At least on the models tested, the rearview camera could be set for a 180-degree view, great for seeing down parking-lot aisles when backing out of a space. Those with 360-degree cameras allow you to choose just the front camera, which is helpful when pulling out of an alley.

With the Limited’s available 360-degree camera, hitting a button left of the steering wheel lets you choose your view, including this “active” full-circle pan.

Most of our on-road time was spent in Limited models. Interiors are lavishly dressed, with lots of padded surfaces and real wood trim. Our tester was fitted with the Limited-exclusive Cognac leather upholstery with matching accents, which really lends an upscale ambiance. Other models offer one or two different two-tone combinations.

Interior storage is only average, though the good-size 2-tier console box in the tested Limited hosted two charging USBs and one data USB.

Considering all that it controls, we found the audio system to be fairly easy to decipher and use, in large part thanks to volume and tuning knobs along with eight physical buttons. The climate controls consist entirely of repetitive-step pushbuttons, which aren’t as convenient to use as rotary knobs, but at least they are within easy reach.

In front there’s good headroom and very good legroom. Noteworthy are that the Limited’s driver and front passenger seats offer power lumbar adjustment, and the power tilt and telescopic steering wheel’s position can be set as part of the seat memory – both nice luxury touches.

In back, headroom may get tight for those over about 5’11, but there’s a bunch of legroom, along with a wide but low floor hump. The Limited had heated rear seats and two charging USBs. 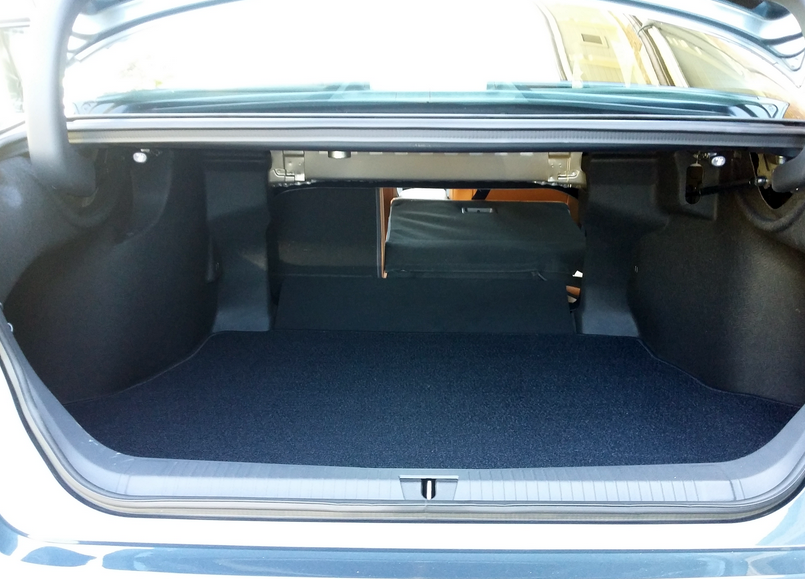 Avalon’s trunk is spacious enough, but sickle-shaped hinges dip into the load area and there’s no additional under-floor storage. The rear seat backs fold, but they leave a restricted opening and rest about five inches above the level of the load floor, and while a ramp helps bridge the gap, it rests at a rather steep angle.

While the trunk is fairly large and wide at the rear for golf clubs, sickle-shaped hinges dip into the load area. Rear seat backs fold to expand the space, but they reveal a somewhat restricted opening and rest about five inches above the level of the load floor (there’s a ramp that bridges that height difference, but it’s probably too steep to allow easily sliding large items forward), and there’s no extra storage space under the floor.

We’ve long been impressed with Toyota’s 3.5-liter V6 for its smoothness and power, and that continues. It provides a good full-throttle jump off the line, and – along with a transmission that kicks down fairly quickly when the throttle is stabbed at speed – strong passing response. We also had a chance to drive a Limited Hybrid, and though it’s not as strong off the line, it’s certainly strong enough, and seems even quicker to respond to throttle inputs.

One of Avalon’s calling cards has long been ride quality, and that seems to continue, though we’ll have to await a local test around our Chicagoland offices – aka: “Pothole Central” – to tell for sure (one of the few failings of the San Diego preview location).

Being positioned as a premium ‘regular” sedan, the Avalon sits between its Camry sibling and Lexus ES 350 premium-midsize cousin – both Consumer Guide® Best Buys – when it comes to pricing, though it’s larger than either. Although Toyota calls it a midsize, we consider it a large car, putting it in competition with the Buick LaCrosse, Chevrolet Impala, Dodge Charger, Chrysler 300, Ford Taurus, and Kia Cadenza in what has become – largely due to the overwhelming popularity of crossovers – a rapidly shrinking segment. But Toyota is set to continue and possibly even thrive here, particularly if the new Avalon is successful in picking up some younger buyers while not forfeiting its traditional ones.

Cars of any nature are getting to be a hard sell, large ones especially. But Avalon has a lot to offer those looking for a family sedan, be they young or … not so young.