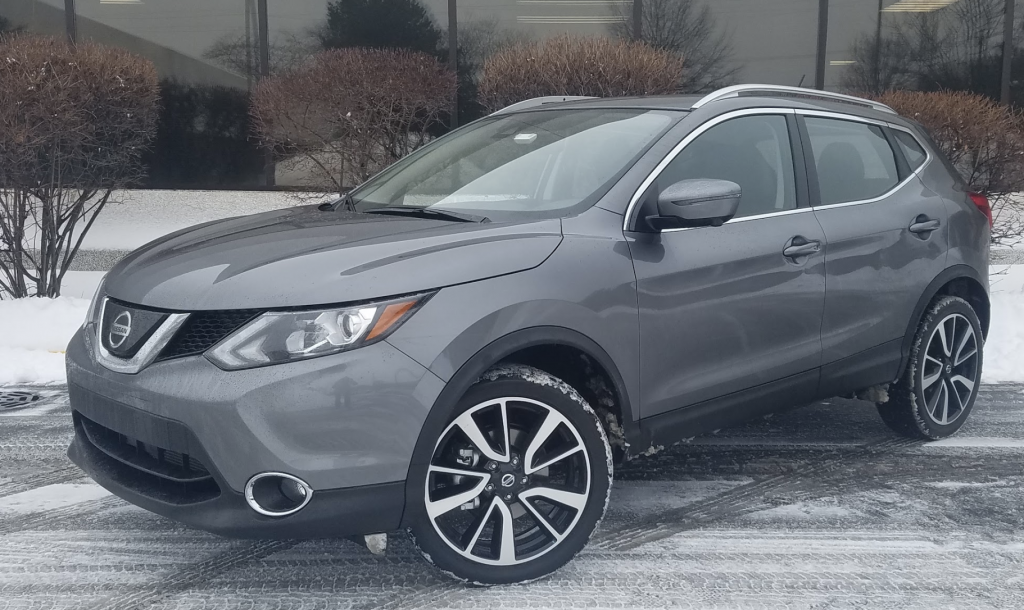 The great: Passenger and cargo room for the class

The not so good: Prices on the high side, fuel economy on the low side

For the second year in a row, the Nissan Rogue Sport has earned a spot on our Best Buy list, even though it comes up a bit short in some areas buyers probably look for when purchasing a small crossover. But that, of course, means it more than makes up for it with other strengths. 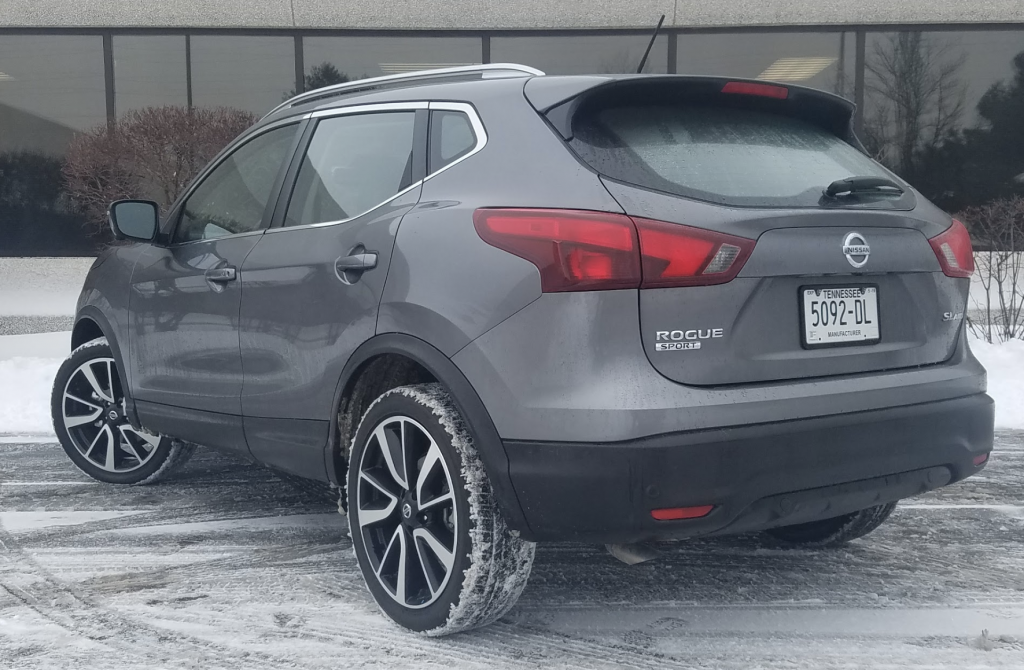 Compared to the “regular” Nissan Rogue, the Rogue Sport is a foot shorter on a 2.3-inch shorter wheelbase — both of which contribute to greater maneuverability at the expense of some passenger and cargo room.

Certainly when it comes to fuel economy, the Rogue Sport trails the class leaders. Fellow Best Buy awardees Honda HR-V and Hyundai Kona beat it in EPA fuel-economy estimates by 2-3 mpg and in our tests by roughly the same. Although we averaged 26.9 mpg in this example, that was in mostly highway driving; a nearly identical model tested last year managed only 24.8 in 40 percent city driving. Also, Rogue Sport prices generally run nearly $2000 north of those for the HR-V and Kona, which is significant for vehicles in an entry-level class.

But as we said, the Rogue Sport makes up for it in other ways.

Our comments in the Test Drive of a very similar 2018.5 Nissan Rogue SL AWD remain valid. Yet what a difference a half-year makes.

Newly standard for 2019 are Nissan’s Rear Door Alert — which detects when a rear door was opened before starting the vehicle and reminds the driver to check back there when it’s turned off — along with Apple CarPlay and Android Auto. Newly available on higher trim levels is a Bose audio system, ProPILOT Assist (more on this later), and Nissan Safety Shield 360, a well-stocked suite of high-tech safety features that includes forward collision warning and mitigation with pedestrian detection, lane-departure warning and mitigation, blind-spot and rear-cross-traffic alert, rear obstacle detection, high-beam assist, and even rear automatic braking — the last, in particular, being unusual for the class, as is the “semi-autonomous” ProPILOT Assist.

And that brings us to the strengths of the Rogue Sport. 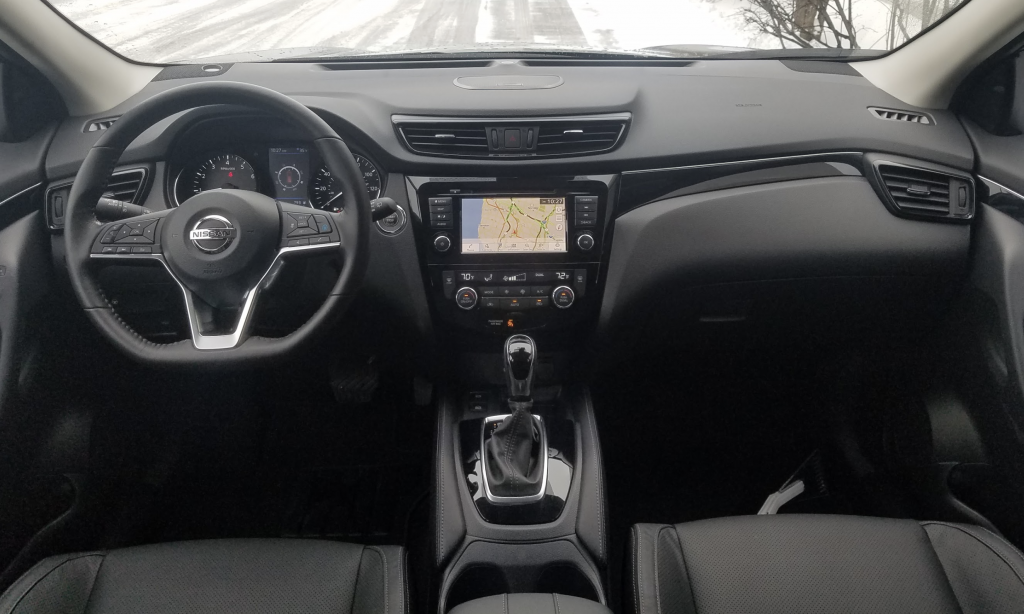 Although our tester’s interior was all black, nice two-tone combinations are offered. Padded surfaces abound, there’s a decent amount of storage space, and handy audio and climate controls are a plus.

In some ways, the Rogue Sport strikes us as an upscale entry in the class. It’s bigger and heavier than the norm, which gives it a somewhat robust feel, and in higher trim levels, at least, offers near-premium-class materials and features. The former includes bountiful padding and ritzy two-tone color combinations, the latter unusually comfortable seats and ProPILOT Assist.

What ProPILOT does is add full stop & go functionality to the adaptive cruise control, and it also includes lane-keep assist. While still a “hands on the wheel” system, it can bring the vehicle to a complete stop behind another vehicle and then start off again without the driver having to touch the brake or gas pedals — a major convenience in bumper-to-bumper city slogging. Yet it takes a bit of getting used to. You have to learn to “trust” that it’s going to do its job, and you also have to be aware that it can’t see stop signs or stop lights, so it won’t stop the vehicle if there’s no car in front that’s also stopped. Perhaps we just didn’t have the adjustments for distance nailed down quite right, but our impression was that the braking and accelerating functions were a bit delayed; it waited too long to brake when the car in front slowed — meaning it had to hit the brakes harder than most drivers might — and the car in front would get a good distance ahead when pulling away before the Rogue Sport would do likewise. But still ….

Cargo space is impressive for a subcompact crossover, and there’s lots of added storage space under the cargo floor. 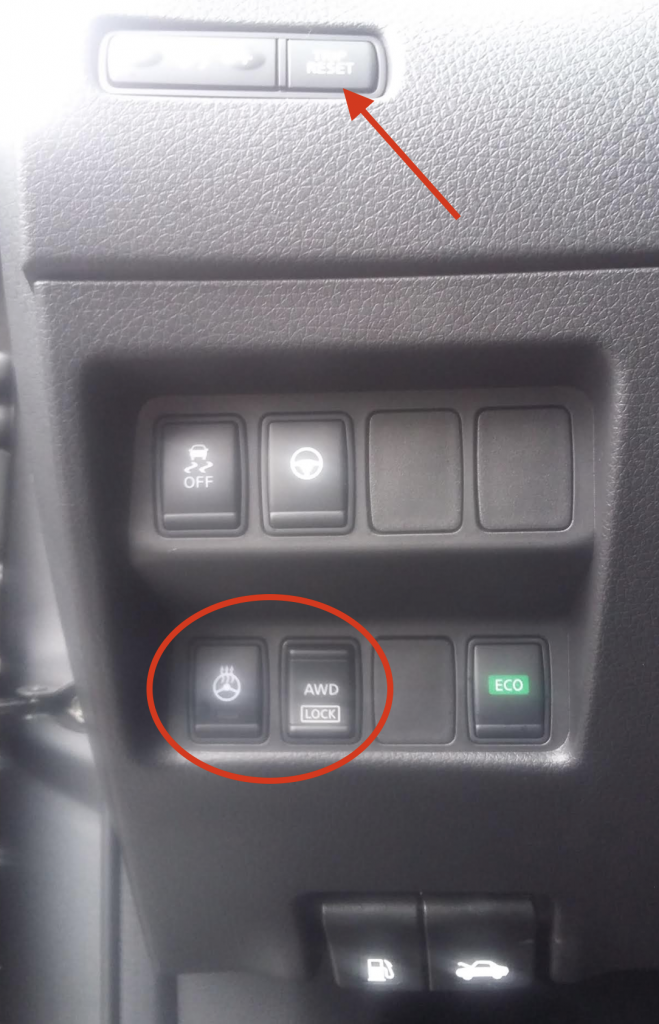 While the trip reset button (red arrow) is handy, buttons for the heated steering wheel and AWD Lock (red oval) — which provides better snow traction — are mounted low, out of easy reach.

A couple of other points. While visibility is good to the front and sides, it’s poor to the rear corners. Thankfully, a rearview camera is standard, and our SL had 360-degree cameras that could be activated with the touch of a handy button. Nicely, it would provide views of the curb on both sides to help alleviate wheel-rim rash; oddly, it didn’t offer a dedicated front view. There’s plenty of cabin storage space, and our SL had dual 12-volt and USB plugs along with an Aux jack, and the audio system included volume and tuning knobs and — an increasing rarity — a CD player, with all audio and climate controls positioned within easy reach. Another nicety is that there’s a lot of “flat” storage space under the cargo floor in back.

But not all is entirely rosy.

While overall passenger space is good for the class, front legroom could be better for really tall folks, and egress from the rear seat is restricted a bit by small door openings. And while we certainly appreciated the SL’s heated steering wheel during our wintertime test stretch, we found it odd that the button to activate it was placed low under the left side of the dash rather than on the console near the heated-seat controls.

Furthermore, the extra heft mentioned earlier takes its toll not only on fuel economy, but also on acceleration. Floor the throttle from a stop, and the Rogue Sport just “moves off” rather than “jumps,” and though the CVT automatic transmission does a nice job of quickly downshifting when the throttle is stabbed at speed, there’s just not a lot of power on tap from the 141-horsepower 2.0-liter four. We timed the Rogue Sport at an average of about 9.8 seconds from 0-60 mph, a mid-pack performance at best. 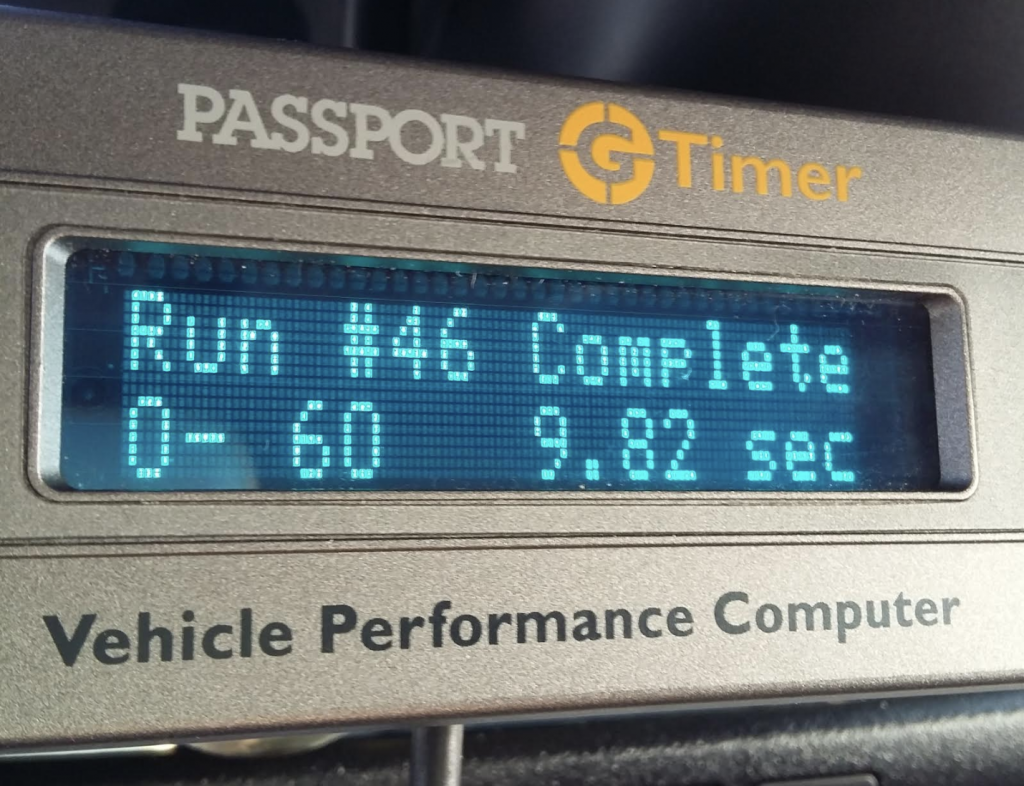 Our timer clocked the Rogue Sport at an average of just over 9.8 seconds in the 0-60-mph dash.

Although the Rogue Sport isn’t perfect, it offers a lot to those who might find subcompact rivals either too small or lacking in creature comforts. And while our other Best Buy choices also have their strengths, they’re somewhat different from those of the Rogue Sport, which stands out as a higher-end entry than most others in the subcompact-crossover crowd.

It’s bigger and heftier than the subcompact-crossover norm — with attendant reductions in acceleration and fuel economy — but its stout feel is one element that gives the Rogue Sport an upscale ambiance. Others include a comfy cabin and lots of high-end features, all of which combine to make the Rogue Sport a Consumer Guide Best Buy.