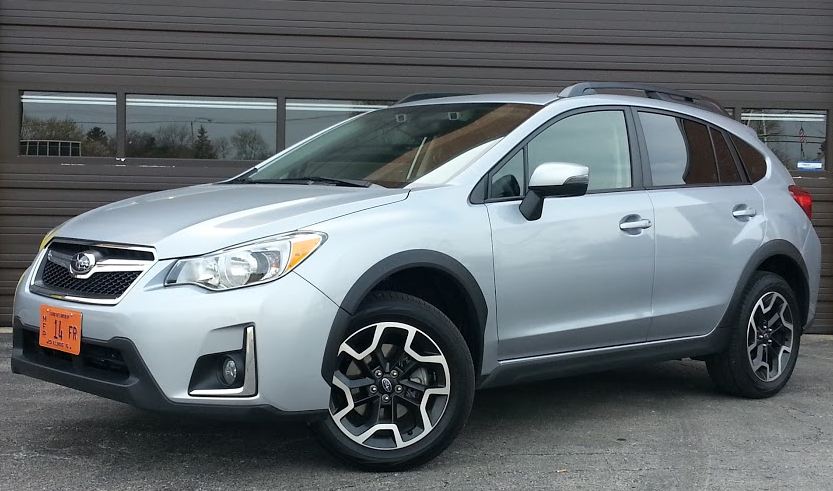 Although the 2016 Subaru Crosstrek starts at less than $23,000 including destination (that’s with manual transmission), our tester was the top-line Limited that starts at just under $26,000, and was boosted to a bit less than $29,000 with some useful options.

The not so good: Acceleration 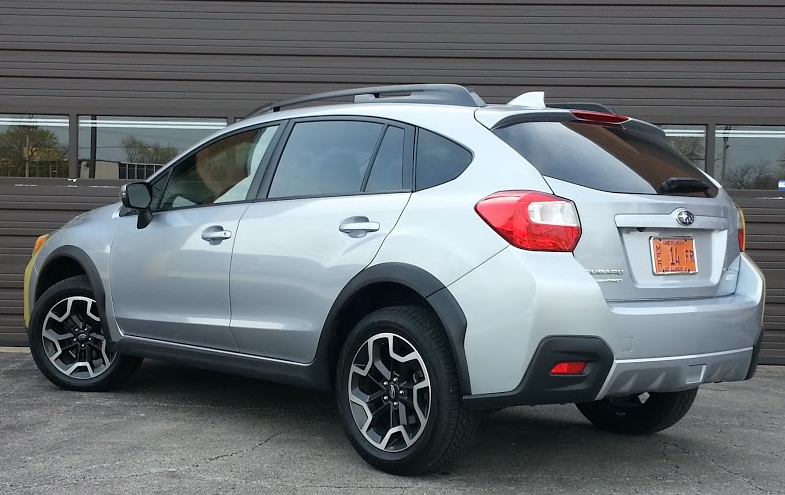 Back in the mid ’90s, Subaru jacked up its Legacy wagon and added some SUV styling touches to create the Outback — which has since become one of its most successful models. In 2013, the company applied the same formula to its redesigned-for-2012 Impreza hatchback to come up with the XV Crosstrek.

The Crosstrek (which dropped its “XV” prefix for 2016) shares its “compact SUV” label with the larger Forester, currently Subaru’s best seller. Though prices don’t differ much between the two, size does; the Forester is nearly six inches longer and — more significantly — its taller, squarer body boasts nearly 50 percent more cargo capacity.

But the Crosstrek has its own merits. For one thing, it leans more toward the “sport” side of the “sport-utility” descriptor, which some people undoubtedly like. It also gets slightly better fuel economy in its base form, and offers a hybrid version that’s even thriftier.

Powering the Crosstrek is a 148-horsepower 2.0-liter “flat 4” engine mated to either a 6-speed manual transmission (offered only in lower-line models) or a CVT automatic that’s standard in upper-line models. As our tester was the line-topping Limited, it carried the CVT, along with a host of standard features including automatic climate control, leather upholstery, heated front seats, and blind-spot alert. Added in the $2895 “Option Package 23” was a power moonroof along with Subaru’s Starlink multimedia system with navigation, satellite radio, traffic information, and keyless access and starting. Also included in the package was the EyeSight driver-assist system that includes forward collision warning and mitigation, lane departure warning, and adaptive cruise control. 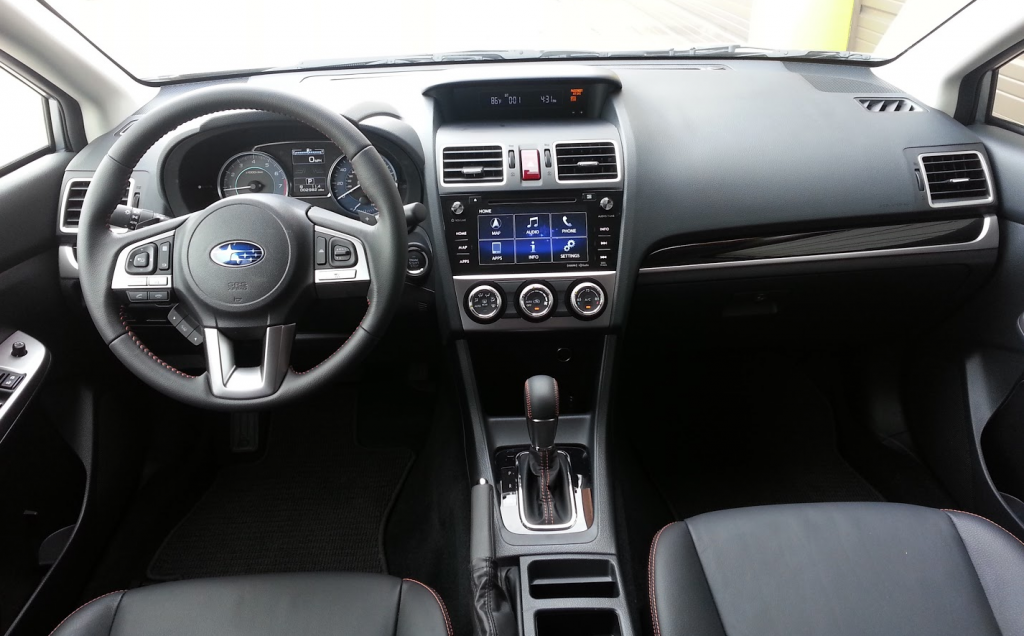 Also great is the dashboard layout, as both audio and climate controls are very easy to use.

Although Crosstrek looks sporty, the 2.0-liter engine doesn’t always make it feel that way. Stab the throttle from a stop, and the Crosstrek gets a decent jump off the line, but it builds speed rather slowly; we timed 0-60 runs in the low 10-second range, which is lagging compared to most competitors. In normal driving, however, it feels just fine, as there’s good response to throttle inputs — in no small part due to the CVT transmission, which kicks down quickly for more passing power.

Sportier, perhaps, is the handling. Turns are taken with little body lean or drama, and the turning circle is exceptionally tight — a boon in close-quarters parking. Ride comfort is also impressive, as Crosstrek soaks up even larger bumps with surprising composure.

Visibility has long been a Subaru strength, and the Crosstrek is no exception. Roof pillars are about as thin as they get in the class, and a rearview camera is standard; the one in our Limited, at least, showed a 180-degree view (most only show about 140 degrees), which allows you to see both ways down a parking-lot aisle when backing out of a space.

While Crosstrek is on the small side for the compact-SUV class, it still offers a good amount of interior and cargo space. There’s plenty of headroom and legroom front and rear for four normal-size adults, though those in back might feel cramped behind a tall front-seater. Ingress and egress are a breeze thanks to the raised ride height (and thus seat-cushion height) and decent-sized door openings. There’s a good amount of cargo space as well, and the rear seat backs fold nearly level with the load floor to expand the area. 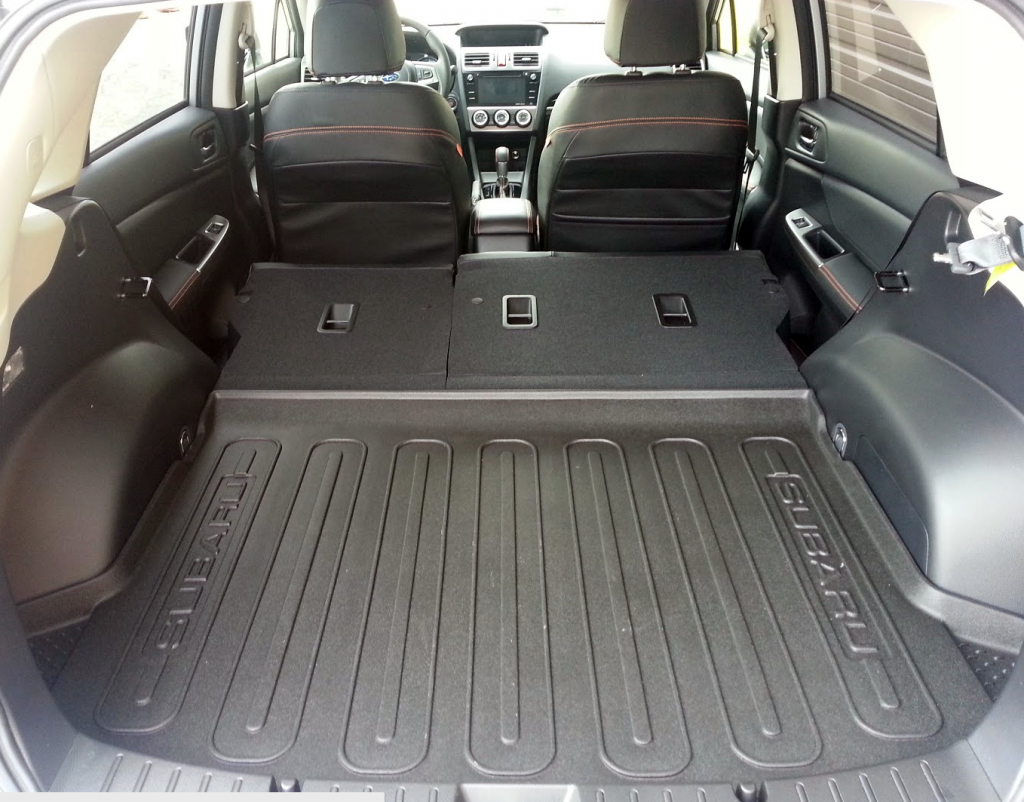 Rear seat backs fold nearly flat and level with the cargo floor to provide a useful amount of room in what is really a rather small compact SUV.

Both the audio and climate controls are refreshingly easy to reach and use. The former includes volume and tuning knobs, with station and band selection done through the touchscreen. Climate controls consist of three rotary knobs, which may seem “old tech” to some, but really can’t be beat for ease of use. Interior materials are nice enough, though the overall look is more “functional” than “dressy.” The usual storage spaces are augmented by a large forward console bin and two smaller bins behind the shift lever.

Oddly, one of the best reasons to add the Crosstrek to your shopping list is that it will lead you to a Subaru dealer, where you can see examples representing both the “sport” and “utility” ends of the compact sport-utility spectrum in one place. And in my mind, at least, you really can’t go wrong with whichever one you choose.

Based on the scores of Crosstreks I see running around the streets of Chicago, Subaru really hit a product-development sweet spot with this vehicle. It’s easy to see the appeal; the Crosstrek’s compact-car dimensions offer a decent amount of cargo space and versatility in a tidy package that’s better suited for Chicagoland’s congested streets than a larger SUV. Plus, the standard all-wheel drive and elevated ride height are just the ticket for powering out of a snow-filled parking spot or alley during a nasty Midwestern winter. And despite its amped-up all-weather capabilities, the Crosstrek maintains pleasingly car-like driving dynamics that are a step more nimble than a “true” compact SUV.

So, the Crosstrek’s concept is certainly ingenious, even if there are a couple quirks in its execution. Since it’s really a pumped up Impreza, the Crosstrek comes up a bit short in cargo room and rear-seat passenger space compared to most other compact SUVs. If you’re planning to really load up for that weekend camping getaway, you might find that the Crosstrek fills up a lot faster than a Toyota RAV4 or Subaru’s own Forester. And, the 148-horsepower 4-cylinder doesn’t feel particularly enthusiastic… the Crosstrek’s acceleration is middling at best. Still, for a broad group of shoppers who aren’t interested in stepping up to a traditional compact SUV, the Crosstrek offers a lot of “best of both worlds” charm.

For what’s really an Impreza compact hatchback on a raised suspension, the Crosstrek looks the SUV part while boasting very carlike driving dynamics.