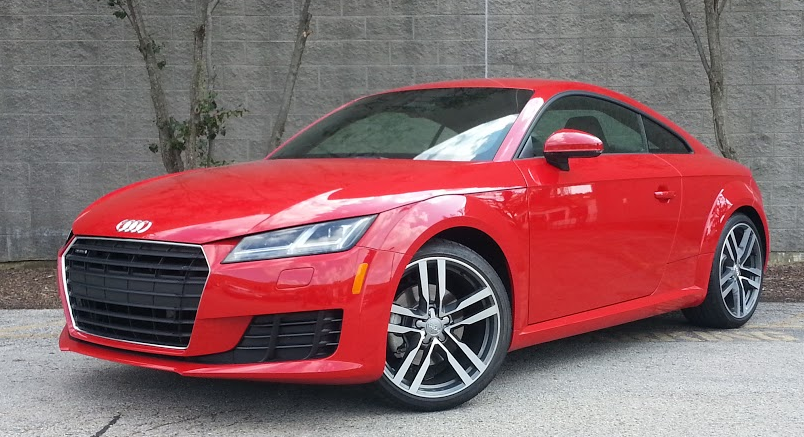 Although redesigned for 2016, the TT doesn’t look much different — on the outside. With a starting price of $42,900 including standard all-wheel drive, our test car listed for just over $50,000 with options and destination.

I’m not quite sure why more manufacturers don’t offer all-wheel drive on their sports cars, but I’m pretty darn sure that Audi is very glad they don’t.

The sloping roofline looks sporty, but it severely limits rear-seat headroom — which really doesn’t matter, as rear legroom is even worse. Thus, the TT should really be thought of as a 2-passenger car.

Audi has made all-wheel drive standard on the TT since the 2010 model year, and that feature is something that sets it apart from rear-drive competitors such as the BMW Z4 and Mercedes SLK. Well, that and the TT’s rather distinctive styling.

You can’t say the TT lacks an identity – or that Audi has been lax in maintaining it. For although it’s been redesigned for 2016, the little sports coupe really doesn’t look that much different … at least until you get inside.

After dropping into the low-set driver seat, you can instantly tell the instrument cluster is new. Personally, I don’t care for the video-game look of it, but it functions okay, and the reconfigurable screen does double duty by showing the rearview camera image right in front of you.

Cool and compact: The rotary dials for the climate system are set into the center of the circular dash vents.

One cool feature is the “dial in vent” climate controls, which house the rotary dials in the center of three round dash vents – cool and easy to use. Not so easy to use are the audio and navigation controls, but they worked (once you studied them a while) and there are redundant audio buttons on the steering wheel that help.

Visibility is good to the front and pillarless sides, pretty good to the rear. One thing noticed when underway is that the blind-spot alert “sees” farther back than most, which is nice.

Materials are typical Audi: rich but subdued. Most surfaces are padded, including the side of the console where your knee hits. There’s decent room in front, though tall folks may feel cramped, but the rear seat is a joke; headroom is adequate for folks only up to about 5’2, which almost doesn’t matter as legroom is nearly non-existent unless the seat ahead is really far forward. So in practice, this is a 2-passenger car. However, you can fold the rear seatback (easiest to reach in from the raised hatch lid) to enlarge the cargo area, which is otherwise on the small side and not very tall. 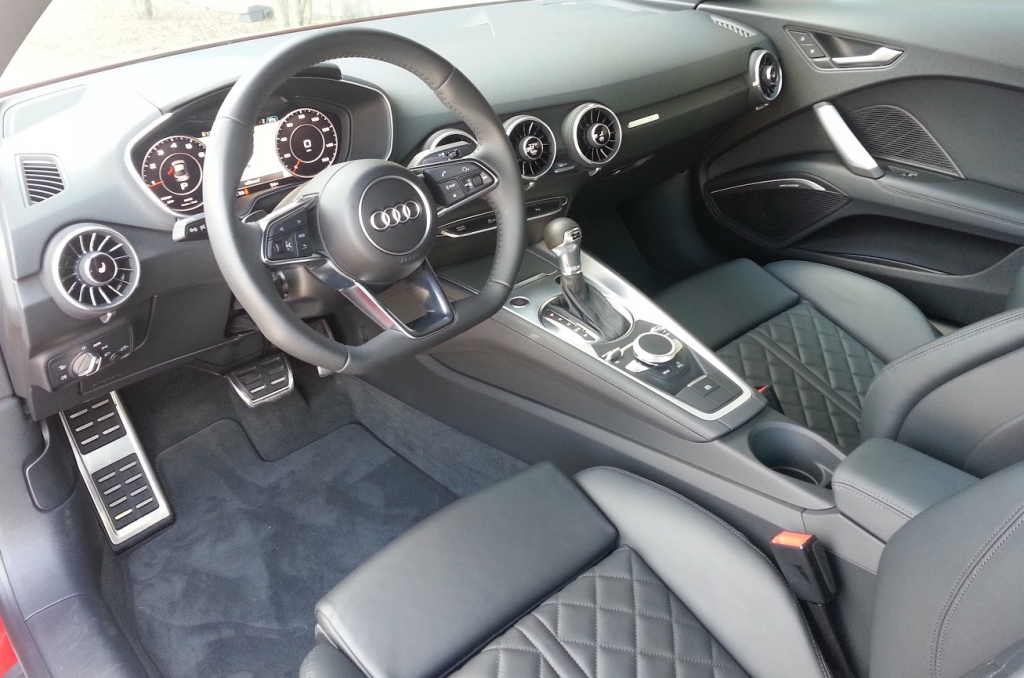 A subdued interior is fitted with high-quality materials, both elements being in line with Audi tradition. A console control knob adjusts audio settings that show up on the instrument-panel screen that also displays the virtual gauges.

There’s not much storage in the cockpit, either. The tiny glovebox holds the CD player, which is very awkward to access. A large forward console bin is thus the best stash area, as behind it is one small cupholder and a far-back console bin with 12-volt plug, and the door map pockets are tiny. If there is an Aux or USB plug, I didn’t find them.

Underway, the first thing noticed is that the car has a dual-clutch automatic gearbox – something that becomes evident almost immediately due to the slightly jerky take-off and shift actions. But it’s not so much annoying as just noticeable, and unlike some of its kind, the TT’s kicks down quickly for more passing power. The engine is plenty strong enough, though it takes a moment in a hard-throttle launch before it makes that obvious. Fuel economy is good for a sporty coupe–our tester returned 32.1 mpg in 85-percent highway driving during my test, though on more-expensive premium-grade gas.

Handling is a key asset. The TT feels very nimble and sure-footed in fast turns, and body lean is minimal. The flip side is that it also rides rather stiffly, something that’s more of an issue on our pockmarked Chicago streets than it might be elsewhere.

There’s a contingent of folks out there who really like the looks of the TT (a friend of mine is one), and they’ll try to justify it as a practical sports car with decent cargo space, fine workmanship, spritely performance, and the traction advantages of all-wheel drive. And they’re not wrong. The TT scores points on all those counts, and though it’s hard to think of it as a value, it offers a combination of styling and features you really can’t get anywhere else, and that’s something you just can’t put a price tag on.

Audi doesn’t change its TT sports cars too frequently. The 2016 model year sees the debut of just the 3rd generation of the line, which got its start in the U.S. as a 1999 model. The overall theme—that of a 2-seat convertible/2+2 coupe grand tourer—hasn’t changed in all that time, and the silhouette of the new car is similar to that of the 2nd-generation TT. Yet there is new styling for 2016, a bit of weight reduction, a slight uptick in power, and a drastically new control layout.

Gentleman’s Hot Rod: We Go the Distance in the Lexus RC-F 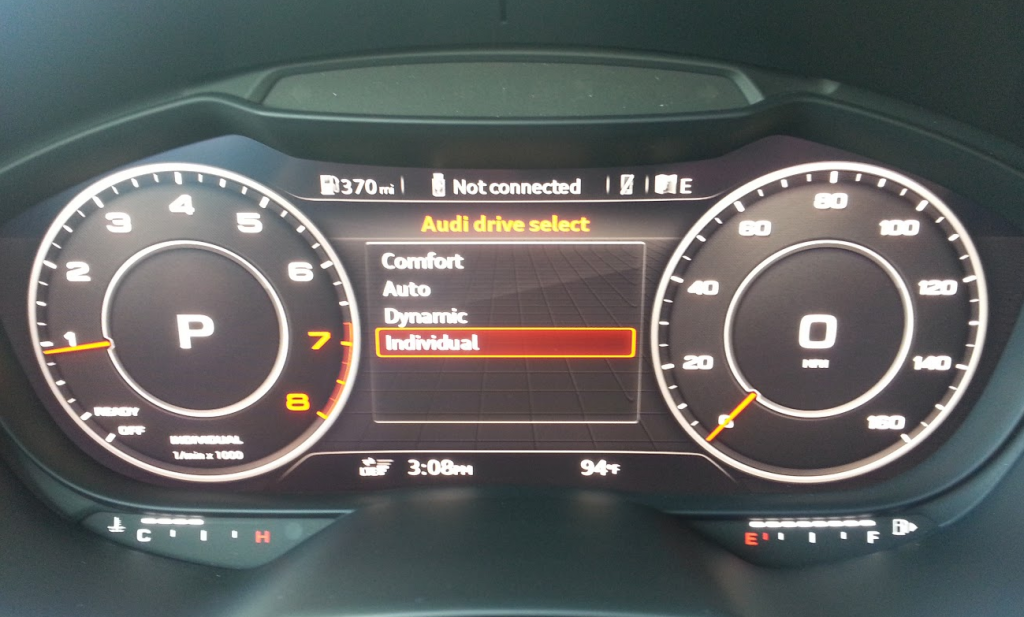 The round “gauges” on the instrument-panel screen only look real if you squint.

The last of those changes is vexing. Say good-bye to a separate screen for audio, navigation, and infotainment-monitoring in the middle of the dash; Audi has consolidated all of that on the same driver-centered thin-film-transistor display on which the virtual gauges also appear. If there’s some logic in packing everything visual into a single screen, this tester couldn’t grasp it in an overnight stint with the new TT coupe.

A dedicated display for audio, navigation, rearview camera, etc., may seem like an added distraction for the driver, but at least it parks some of the electronic functions of the modern automobile to the side. That gives the operator more of a chance to focus on the things crucial to driving. However, with everything and the kitchen sink routed through one screen, getting to what you need to see requires scrolling through a lot of what you don’t. Plus, if there’s one screen for everything, then summoning the list of radio presets in order to change stations pushes off, say, the instantaneous fuel-mileage readout, or the nav map, or any other bit of information about which a driver may want to stay informed. Returning to that information triggers a new round of scrolling and tapping, and the various topical displays have different widths, depths, and colors. One moment the speedometer and tachometer displays are large and centered, then with a twist of the MMI system-controller dial on the console, they get smaller and push to the far ends of the screen to make room for some new presentation of information. 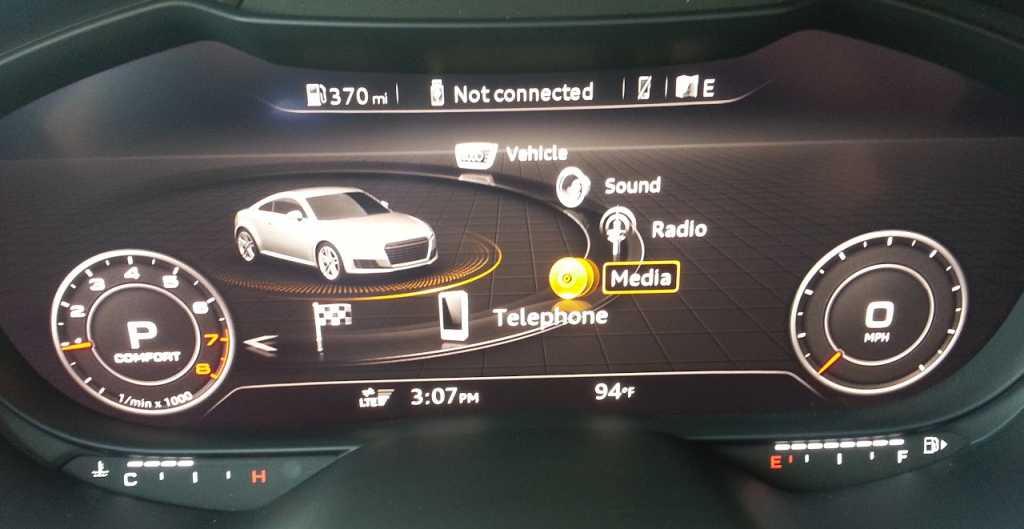 Call up certain info screens, and the gauges shrink to golf-ball size.

Plus, climate controls are now a series of push buttons at the center of each of the circular dash vents. Seat-heater on/offs reside in the vents at the far corners, and fan speed, temperature, and mode switches rest on the middle 3 vents, respectively. Interior materials and assembly are really nice, up to the reputation that Audi has created for itself in this area, but the control layout is totally disconcerting.

The 2.0-liter turbocharged 4-cylinder engine now makes 220 horsepower, a gain of 9 from 2015. It’s not an absolute screamer, but it produces vigorous acceleration that’s more pronounced when the driver selects the “Dynamic” driving mode. That brings about a more aggressive shift pattern from the 6-speed automated-manual transmission. In a 54.1-mile trip, 69 percent of it under city conditions and almost half of it in Dynamic mode, this driver averaged 18.90 mpg.

Dynamic mode also firms up the steering, definitely making the car feel racier, but “Comfort” and “Auto” settings deliver pleasing handling. Even in the “tamer” modes the ride is firm, but we doubt anybody interested in this type of car will find it too stiff. 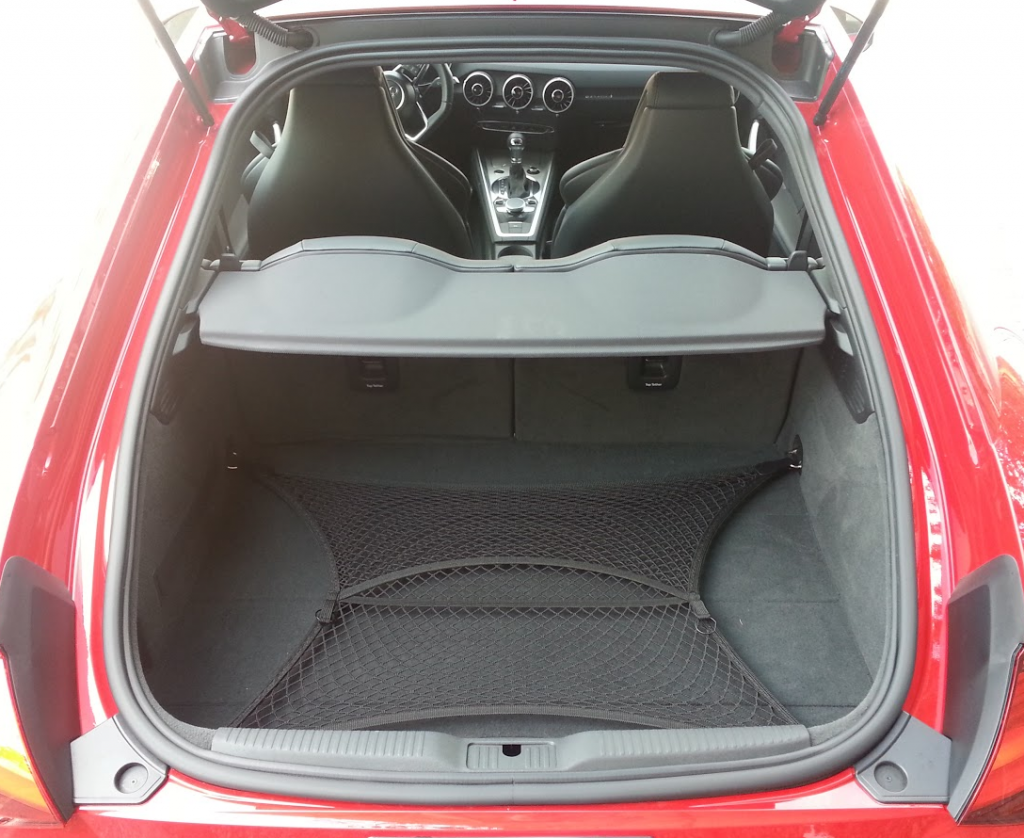 The TT’s trunk is narrow and not very tall, but it offers a fair amount of capacity for a sports car. Furthermore, the space can be expanded by dropping the rear seat backs.

Interior storage for incidentals is skimpy, and the best use for the rear seats is to fold down the 50/50-split back rests to create more of the luggage space that the cargo area lacks under the hatchback deck.

The TT has always been something of a fashion-forward boutique item, but a lively, solid-feeling one. That’s why it continues to offer value for drivers whose needs aren’t strictly utilitarian.