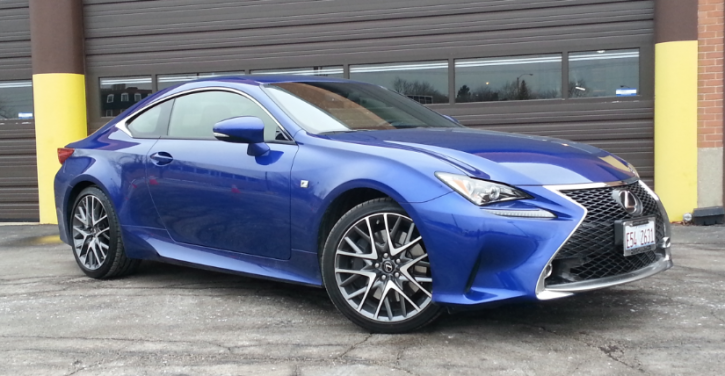 The not so good: Severely cramped rear seat is also hard to access, not all testers like Lexus Remote Touch multimedia control interface

Click here for more information about the entire Lexus lineup

The ad that Lexus sprang during the Super Bowl telecast for its new RC 350 coupe had a drifting theme to it. The RCs on the screen sure looked like the right things for daredevil motorsport, but there’s definitely one kind of drift for which they’re not made: a snow drift.

As the Patriots and Seahawks were getting set to kick off in Arizona for all the NFL’s marbles, yours truly was already tired of watching snowflakes fall . . . and fall . . . and fall outside his window in Chicago. When it finally stopped early the next morning, with 19-plus inches on the ground, a lot of us in the area were granted a snow day—and a chance to dig out in hopes of making it in to work or school the following day. However, the RC 350 F Sport test car in my garage was having none of it.

Driven by the rear wheels and shod in “summer” tires, it reluctantly made it up a short incline in the driveway—even after shoveling there still were icy patches on the surface—but it was game over when the RC was backed into the street. City plows had been down my block the day before, but plenty of snow remained at the margins. Upon reaching it, the RC 350 instantly became a wheel-spinning stationary object, even with the “Snow” setting on the Drive Mode Select system activated. If the car could have been dug out, a glance up the street suggested numerous opportunities for repeats of this sorry state of affairs. The only choice then was to push the RC back the way it had come, garage it, and take the family front-wheel-drive sedan to Consumer Guide® Supreme World Headquarters. 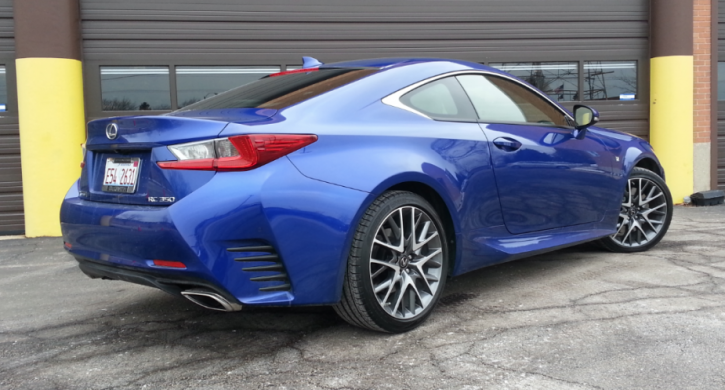 From the front or the rear, the RC 350 sports a swoopy, aggressive look. The radical styling isn’t for everyone, but it’s hard to miss in a parking lot.

Fortunately, not all of CG editors’ time with the RC 350 F Sport was spent in the snow, though there was more than one storm in that stretch. Neither was it their first rodeo with the all-new RC family, having previously tested the muscular V8-powered RC F. Naturally, the V6 RC 350 isn’t the pavement burner that the RC F is but the 2 cars offer essentially the same passenger room and, with the F Sport package added to the RC 350, a close match in instrumentation and some performance equipment. The 350 F Sport owner does this at a savings of about $19,000.

Power delivery in the RC 350 is nice, but the 306-horsepower 3.5-liter dohc V6 won’t press you back in the seat. It is, however, utterly smooth and generally quiet. This powerplant is complemented by an 8-speed automatic transmission that, thanks to the standard Drive Mode Select, can vary performance according to need or want. “Normal” plays things down the middle; “ECO” tempers throttle response, power output, and climate settings in pursuit of better fuel economy; and “Sport” and “Sport S+” are calibrated for quicker throttle response, plus modified steering and suspension behavior in Sport S+. (The console-mounted selector dial for these settings is accompanied by push buttons for Snow mode and traction-control deactivation.)

I stayed in Normal mode throughout my 110.1 miles with the RC 350. With city-type driving conditions accounting for 64 percent of that distance, the car averaged 17.66 mpg. Perhaps it suffered a little from performing in the driveway ice follies, but that was only minutely better than the mileage that I attained in the 5.0-liter 487-horsepower RC F.

Base ride in the RC 350 is pretty good; nothing jittery or noisy, and perhaps a little less firm than in the RC F. Even though the 350’s brakes aren’t the F’s ventilated Brembos, braking is still sure and prompt. (Other RC F performance features not found on the RC 350 F Sport are a limited-slip differential and aerodynamic body enhancements.) Steering response was similarly pleasing in both. 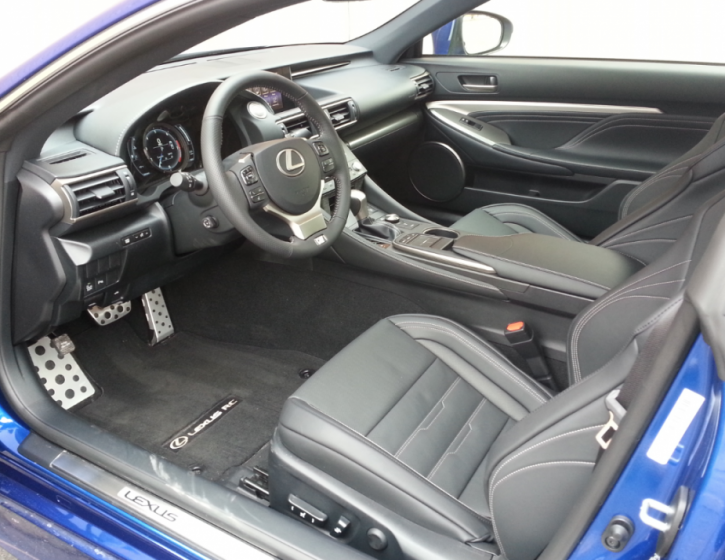 The low-mounted seats make entry and exit a bit tricky for some passengers, but the RC 350’s cabin is nevertheless a winning blend of luxury and sport.

The RC 350 uses different soft-touch material on the doors and dash, but still distributes it liberally throughout the cabin. Unlike the F, there is no ski pass-through in the 60/40-folding rear seats. Neither is there a rear console with cup holders—just a flat plastic “tray” between the seats.

The RC F and 350 F Sport have the same interior packaging. Front-seat occupants sit in firm, grippy seats, and enjoy decent head- and legroom. Rear-seat passengers, should there ever be any, are not nearly so lucky. The console houses the same optional touchpad control with pinch and swipe capability for adjusting audio, climate, and other systems that register on a color screen in the instrument panel. It’s an improvement over the system it replaced, but not totally without attention-diverting quirks. 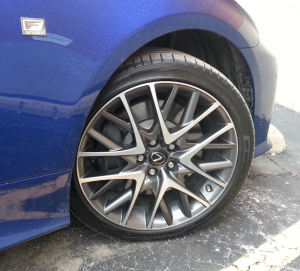 Attractive 19-inch wheels are included in the F Sport Package.

The test car also came with a Navigation/Mark Levinson group that added an enhanced 17-speaker audio unit, voice-activated navigation system, back-up camera, app suite for the Lexus Enform infotainment system, and the console-mounted touchpad controller. Fog lamps, parking assist, special paint, a moonroof, and variable-ratio steering were the other extras that ran the $42,790 starting price of CG’s tester to $54,815 with delivery.

Unlike the RC F, the 350 can be ordered with all-wheel drive and all-season tires. I don’t know if they would have had a better chance in the snow but they couldn’t have done any worse . . . if you get my drift.

Excluding the $400,000 LF-A, the RC is this Japanese luxury maker’s first sports car, and it’s almost exactly what you’d expect it to be. Imagine an updated Toyota Supra but with a quieter, better-looking cabin, and a much more compliant ride, and you’re pretty close to realizing what the RC is.

My snow experience was less troubled than John’s, though my blizzard driving was limited to more constant elevations. I found the RC calm and predictable in the white stuff, though were this my own ride, I would invest in a set of winter tires.

Lexus is mum on sales expectations for the RC, but I suspect the brand has a hit on its hands. I can see RCs serving duty as a primary driver for the up-and-coming manager, and finding favor as a second car for the well-heeled senior executive already in possession of the maker’s big LS sedan.