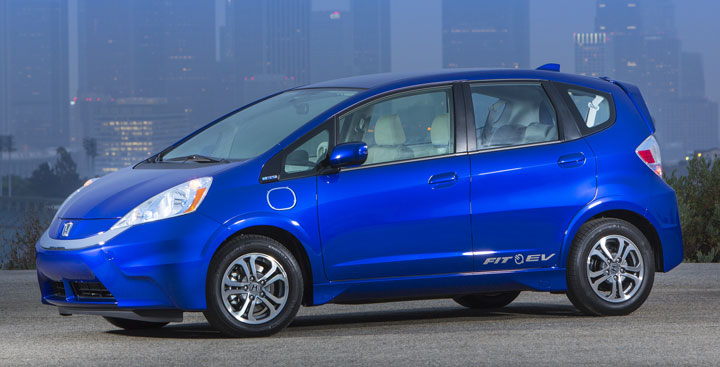 Initially, the Fit EV will be available only in California and Oregon. Additionally, it will only be leased, not sold.

Unlike many model-name acronyms that seem to carry no significance whatsoever (what exactly are we supposed to infer from “ILX,” “XTS,” or “MKS”?), the letters “EV” have meaning. And in the coming years, you’ll likely see the abbreviation for “electric vehicle” on more and more badges.

Although it’s certainly not the first car to carry the nomenclature, the latest one that does is the new Honda Fit EV, which just went on sale in California. As the name implies, it’s essentially a Honda Fit that has undergone an engine-ectomy and been fitted instead with an electric motor and battery pack. We had an opportunity to drive one at a press preview a while back and came away with the following impressions.

1. According to the EPA, the Honda Fit EV not only has the highest MPGe (miles-per-gallon equivalent) rating of any electric car currently on the market, but also the longest range: 82 miles in a mix of city/highway driving. In our experience, we’ve found electric cars generally cost 2 cents per mile or less to drive, so a full “tank” of electricity would probably run about a buck fifty. That would buy you less than a half-gallon of gas at today’s rates. How far could your current car go on that?

2. Unlike what might be the general perception about electric cars, the Fit EV is quite quick; test examples were squealing their front tires on takeoff, and around-town throttle response is both instant and fairly strong. Only in highway-speed passing does it seem a bit wanting for power.

3. The EV’s ride and handling capabilities are better than the already-good gas-powered Fit. This is largely due to the fact that the weight of the electric motor and battery pack (the latter housed beneath the floor) are low in the car, prompting a lower center of gravity that reduces body lean in fast turns.

4. While the gas-powered Fit is a rather raucous ride due to high levels of engine and road noise, the Fit EV is much quieter—and overall more serene—than the typical small car. The electric motor makes only a subdued whine under acceleration and is virtually unheard otherwise. Moreover, improved aerodynamics and added sound insulation cut wind and road noise, particularly at highway speeds.

5. Interior ambiance has never been one of the Fit’s strengths, as expanses of hard, bland-looking plastics are the order of the day. Not so in the EV version. While the design is the same—maintaining the Fit’s excellent packaging and numerous storage bins—appearances have been improved with bright trim and a richer two-tone color scheme.

More about the Fit EV

And now for the bad news: Your chances of getting one are exceptionally slim.

First, the Fit EV is initially going to be available only in California and Oregon, with sales expected to spread to the Eastern United States in early 2013. Furthermore, Honda has committed to building only 1,100 examples, and we’d be surprised if that number didn’t sell out in the first 6 months.

For those who might be interested in a Fit EV, note that the car is only going to be leased—not sold. Here’s the deal: $0 down and $389/month for 36 months, which includes a bumper-to-bumper warranty, all maintenance, and collision insurance coverage. That hardly seems cheap in a world in which TV commercials scream “Just $199 a month!,” but that’s for a car loaded with features (including a navigation system) for which you paid nothing down and never have to shell out money for oil changes, tire rotations, coolant flushes, wiper blades, or any other maintenance items—and that you drive for less than 2 cents per mile.