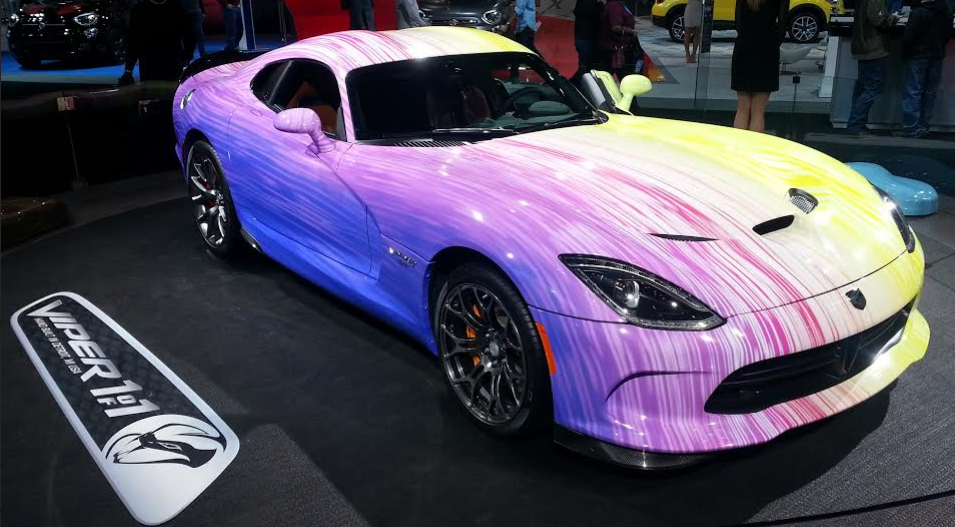 This radical vinyl-wrapped Viper was on display at the 2015 Chicago Auto Show to promote the Viper 1 of 1 program.

At the 2015 Detroit Auto Show, Consumer Guide sat down with Dodge President and Chief Executive Officer Tim Kuniskis. With the brand being repositioned as Fiat Chrysler Automobile’s American performance division, we wanted to learn more about the future of this century-old marque. This is part two of that interview. Click here for part 1.

So, you’ve got the Hellcat Challenger and Charger that are generating a lot of buzz. But the Viper is a slow seller. What’s next for that car? Does that remain the halo car?

So Viper, by definition, just what I talked about–760 sales, 4 million people go to the website. It is a huge, huge, huge halo car. We did a couple things to it recently. We did the price repositioning of the car late in September, mid-September, and that has had a pretty dramatic effect. We’ve lowered the price by $15,000 for 2015, and we have dramatically driven the content down to lower trim levels. So it’s more like a $30,000 repositioning. 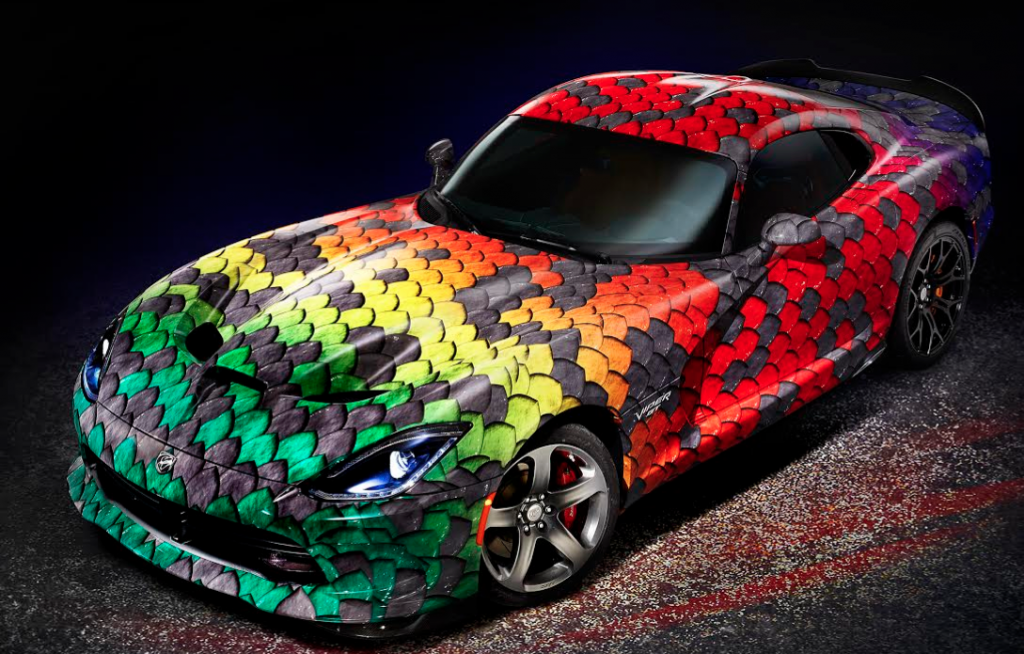 The Dodge Viper 1 of 1 program allows buyers to create their own one-off customized Viper via 8,000 custom paint-color choices, a dizzying array of interior and exterior appearance features, and a host of other options.

So we took it to the next step. We did the repositioning. We did the re-contenting for $15,000 and that got us a lot of traction–arguably, in the worst time of year to try to sell a car like that–October, November, December. And we did that and drove our inventories down pretty low. I mean, we’re below one car per dealer if you look at all the dealers out there and the cars that we have–about 300 cars in stock. And we did that purposefully because we’re going to launch this program called Viper 1 of 1. 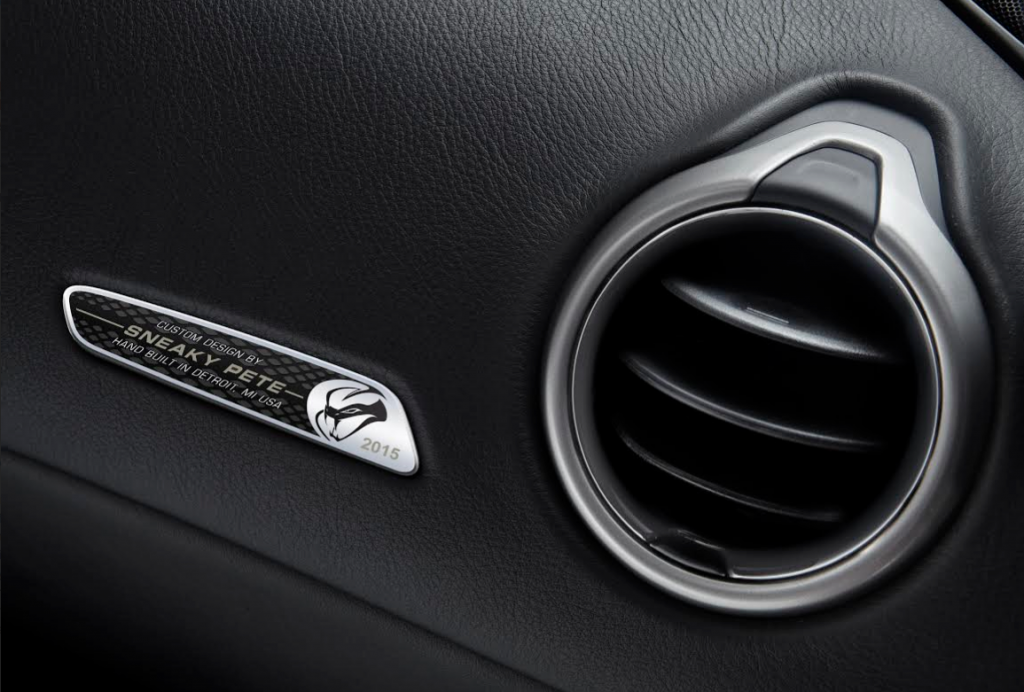 A personalized dash plaque with the owner’s name is included on Viper 1 of 1 cars.

So we wanted the inventory in stock as low as possible because what we’ve found–talking to the Viper owners and the people that were interested in Vipers–was stocking a car like this in dealer inventory, you’ve got to be very, very careful. You can’t stock very many of them, and you got to be very mainstream with what you do–don’t order stripes, order the more high-value cars. Don’t load up the car with all of the carbon packages and aero packages and things like that. Before you know it, you’re going to be over $100,000. And the guy who’s buying a $100,000 car, he wants what he wants.

So the program we launched lets dealers stock one car or a 30-day supply, whichever number is higher. So most dealers will get to stock one. All the rest of them, if they’re a proven performer and they sell 15 a month, they can stock 15. But the vast majority will stock one just so you can look at it, sit in it, take it for a test drive, and then we’ll build you any car you want. We opened up a palette, a toy chest of options and features. Eight-thousand colors. Pick any color you want–24,000 stripe options, ten different wheels, different seat packages, aero packages, brake packages, everything that we have. You can build anything that you want. There are 25,000,000 combinations. 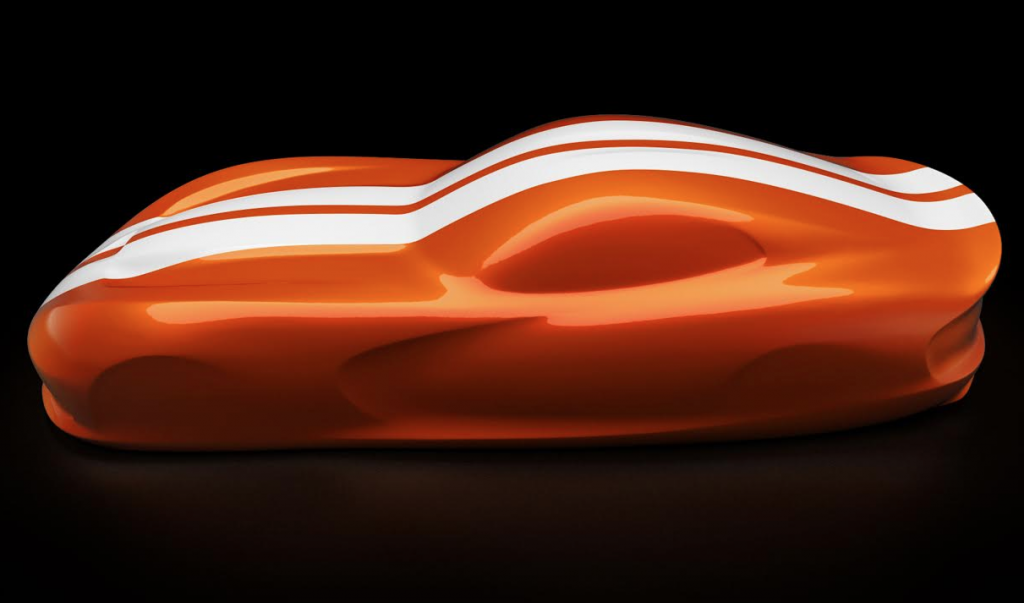 Viper 1 of 1 customers receive a keepsake 1/18-scale “speed form” model to confirm their color scheme choice prior to their one-off car being built.

The way the paint works is you go online, configure your car, and you say, I want this orange with the silver stripes. Okay, you’re going to buy a $95,000 car in this color, you better be pretty sure. So you come in, order the car, sold order only. And when you order it, you work with our Viper concierge. They send you a speed form (a painted, car-shaped molding that is essentially a three-dimensional color chip—Ed.) of the car in your color. And you then get it, take it outside, put it in the sun, look at the angles and go, that’s it. That’s the color I want. Sign off–build me the car.

And now the car comes, instead of having the plaque built into the dash that says Viper, it now says handcrafted for Tim Kuniskis. One-of-one design. Your name is now in the dash. As soon as your car is delivered, that car’s off. No one can order the exact same car.

So once you own it, you own that particular combination.

We’re going to do that. We’re going to ship you the car. Your name’s going to be on the dash, and we’re going to track all of that on our website. So you can go on to the website, and you can see Bob in Pennsylvania, Mark in New York, Kevin in Idaho is building these cars and here’s what they’re building and here’s pictures of it all through the build process.

Last question, and I expect to hear “we don’t comment on future product.” Any chance we’ll see a Hellcat-like engine in the Viper?

No, part of what this car is all about is the V10 engine. In the video we just launched the other day, it was done really for our website to tell the story of what this car is. The fact that we’re doing the 1 of 1–we have the ability to do that because it’s the only handmade American supercar that exists. We build the engine by hand. We hand assemble it, we dyno test it. We build the chassis by hand, hand-laid carbon fiber. It’s a handmade car, and that’s how we can do something like this. We couldn’t do something like this with a Dart.

When does promotion of the 1 of 1 program begin?

It’s out there. It’s live. We start taking orders in February, and we start building them in the second quarter.

Are you directly reaching out to current Viper owners?

Yeah. The funny thing is–hindsight now–we’ve made all the plans to do all that. Hindsight, I don’t think we needed to, because the Viper owners and enthusiasts are a very rabid group of enthusiasts. It’s funny. We’ve sold 25,000 of these cars, yet 4 million people a year go to the website. Three million people a month search something on Google that’s Viper related–for a car that we’ve been selling for years and only sold 25,000 of. That’s pretty amazing. Viper owner fact: 25 πpercent of these people own more than one Viper. They’re that hardcore a fan.

Are you compensating current Viper owners for any potential resale value hit their cars may take as a result of the price adjustment?

So we said, in addition to repositioning this car, we’re going to send them all a coupon, and we sent them a coupon for $15,000 off [of their next Viper purchase]. The coupon’s good for three years. And it’s funny, you go to the forums, and now when this program launched a bunch of them logged into the forum and were like, I didn’t really get this coupon, but now I get it. Now I can go get the carbon fiber interior and the Michigan State green with the white stripes and the black wheels, and I can get it at $15,000 off. Now I get it. Now I know what they’re up to.

Part 1 of our interview with Tim Kuniskis

Damon Bell contributed to this interview