General Motors did itself some harm back when, selling too many of its bread-and-butter cars and crossovers into rental fleets.

The harm was that when these cars were done serving traveling salespeople, folks waiting for their wrecked cars to be repaired, and the occasional vacationer, they were dumped into the used-car market—typically in large numbers.

So in the case of, say, the previous-generation Impala, you’d have a quantity of used cars on the market that arrived there the traditional way (as a trade-in on a new car) and an additional quantity of cars arriving from rental fleets—which made for far too many used Impalas.

This inventory surplus drove down the resale value of Impalas, as there were more cars floating around than the public was willing to purchase.

GM ran into this problem most recently with the aforementioned Impala, but also with previous editions of the Malibu and the previous-generation Equinox. Of course, GM isn’t alone in this boat. Chrysler and Ford have found themselves dumping too many cars into fleet service—mostly to keep sales numbers appearing robust—and suffering the consequences. Mitsubishi moved most of its Galant stock into rental service.

Now, why would a new-car maker worry about resale value? The first and most obvious reason is that if a customer finds that his current car isn’t worth much at trade-in time, he is less likely to be a repeat customer—and also less able. For many shoppers, the only money that is put down on the new car comes out of the trade-in value. Additionally, leasing costs are tied directly to projected resale value. The higher the projected value of a vehicle at the end of a lease term, typically two to three years, the lower the monthly payments.

So, what does this have to do with the Chevy Captiva Sport? To preserve the resale value of its core products, General Motors has reduced the quantity of those vehicles that are allocated to rental fleets, and replaced most of them with the Captiva Sport. The Captiva, you see, cannot be purchased new.

General Motors has done this before. The 2004-2005 Chevrolet Classic, for example, was a fleet-only version of a previous-generation Malibu, and it was produced concurrently with a newer retail version of the car.

Sharp-eyed readers have probably already picked up on the fact that the Captiva is pretty much just a retrimmed 2008-2009 Saturn Vue. This is not a bad thing, as the Vue was a fine crossover. For 2013, the Captiva is available only with a 182-horsepower 4-cylinder engine mated to a 6-speed automatic transmission. The V6 engine and available all-wheel drive offered on 2012 models have been dropped.

While U.S. and Canadian Chevy buyers have only the excellent Equinox to test drive at local dealers, Mexican shoppers have only the Captiva. Captiva is also available in a number of other markets worldwide, and it is sold in Europe as the Opel Antera.

Compared with the Equinox, the Captiva is about eight inches shorter and rides on a six-inch shorter wheelbase. The big news inside is the extra three inches of legroom that rear-seat occupants enjoy in the Equinox.

In Consumer Guide testing, we found the Captiva a pleasant enough vehicle. The engine’s 182 horsepower is more than enough for normal driving, though it seems louder here than it does in the Equinox. In a mix of city and highway driving, we averaged 24.5 mpg.

Road and wind noise are also more prominent in the Captiva. The most compelling contrast between these two Chevrolets is interior trim. While the Captiva looks okay, the Equinox looks markedly better. Credit the Equinox’s more-modern design as well as higher-quality materials and better fit and finish. 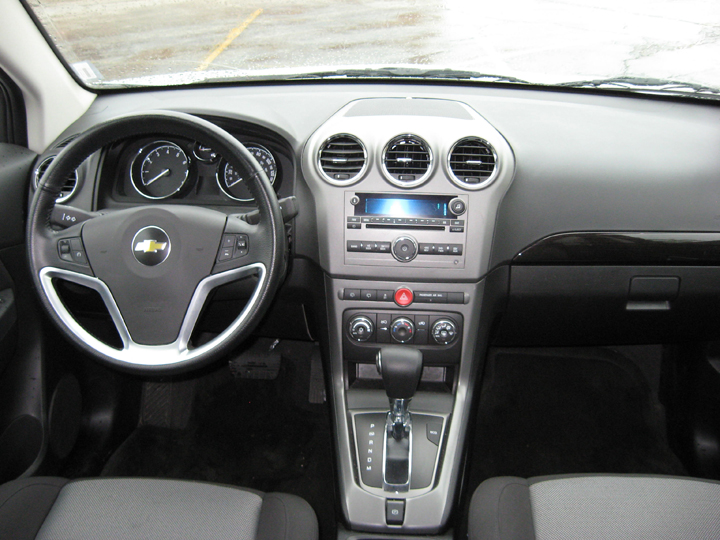