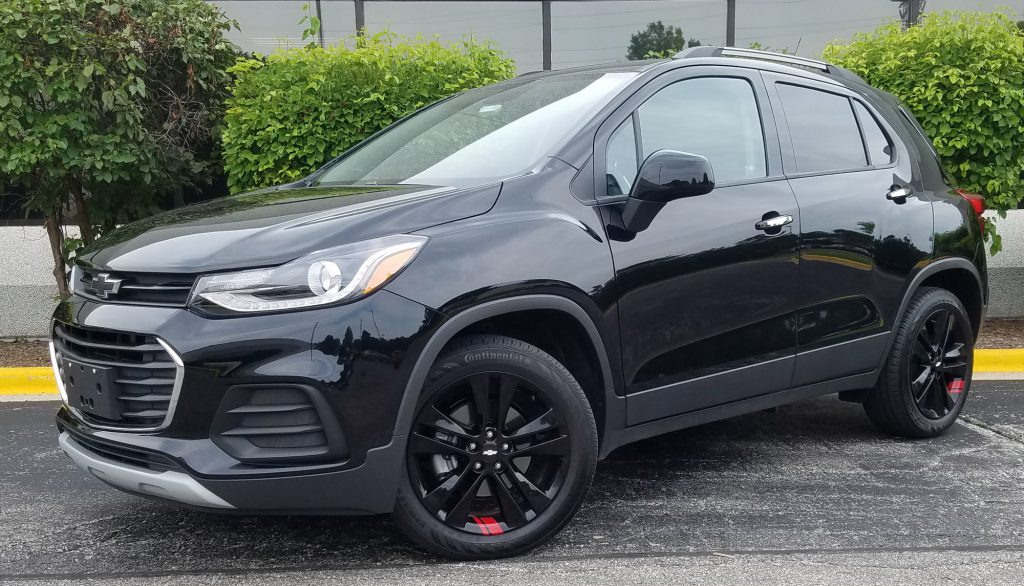 The not so good: Tall drivers can’t fold rear seats flat, ride (at least on tested model), too many high-tech safety features reserved for top-line model

Chevrolet’s Trax was one of the early participants in the subcompact-crossover game, earning kudos for its clever packaging, decent fuel economy, and value pricing. And though it received a “refresh” for 2017, it really hasn’t changed much in substance from its 2015 debut.

That’s both good and bad. 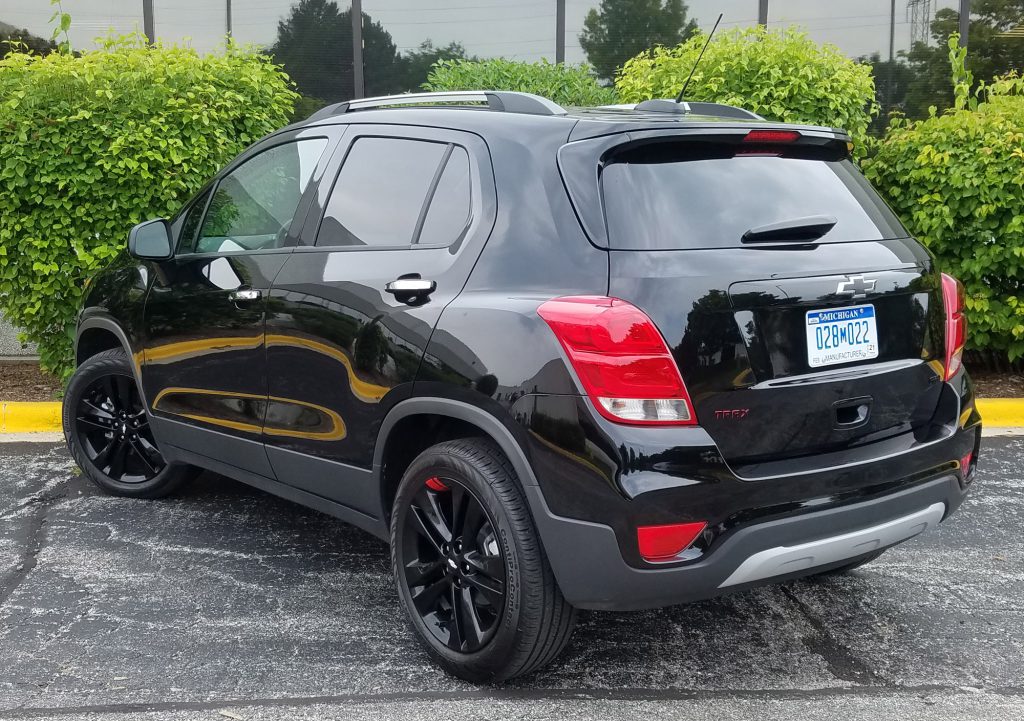 At 167.6 inches in length, Trax sits on the short side of “average” for the subcompact-crossover class, but offers plenty of interior and cargo space.

Trax started out as a study in pint-size packaging. Not only is passenger space impressive for the small overall size, but cargo space is decent as well. But the real star is cabin storage, where there are a multitude of handy storage bins, including a large lower glovebox, a left-side dash bin, large door map pockets under small “eyebrow” bins, and a slide-out drawer under the front passenger seat. 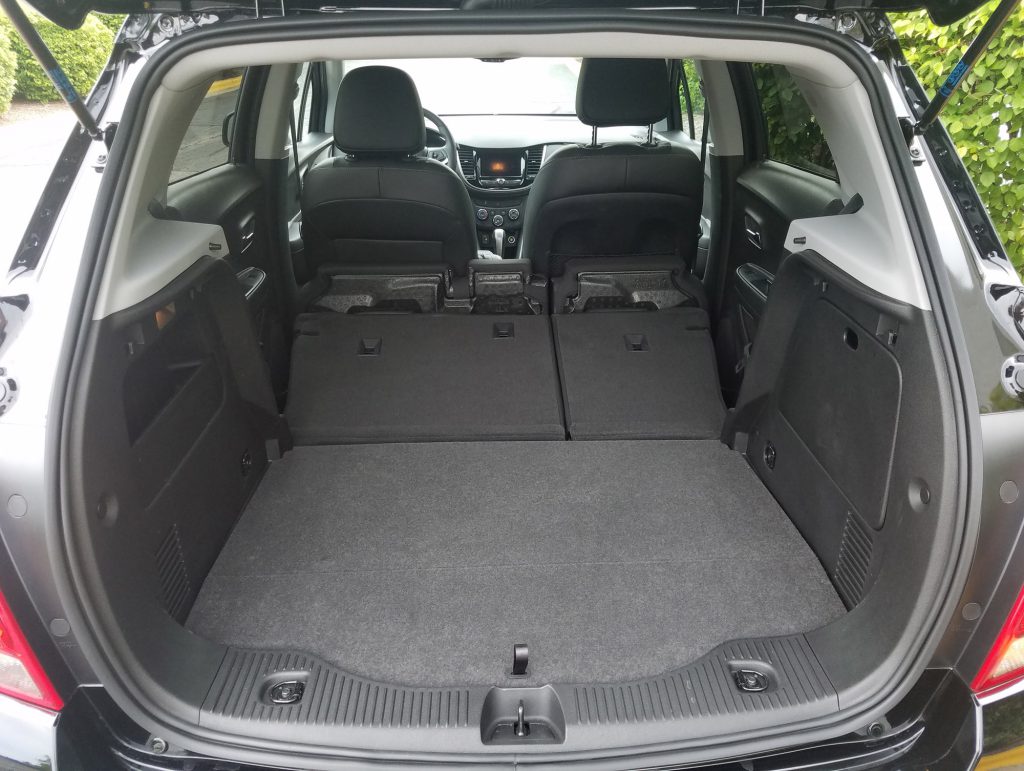 And speaking of the front passenger seat, it can be folded forward so that items up to 8-feet long can be carried — if you can get the rear seat backs folded. We say “if,” because in order to do so, you have to flip the rear seat cushion forward first, and it won’t “flip” if the front seat is pushed far back. You also have to fold the rear headrests forward, which — while it adds yet another step to the process — also allows for a clearer view behind when backing, aided further by the standard rearview camera.

But that only partially makes up for what is otherwise not great visibility. All roof pillars are somewhat thick — the side and rear ones being the worst — and oddly, the sun visor, when swung to the side, doesn’t extend, thereby leaving about seven inches of the side window uncovered. 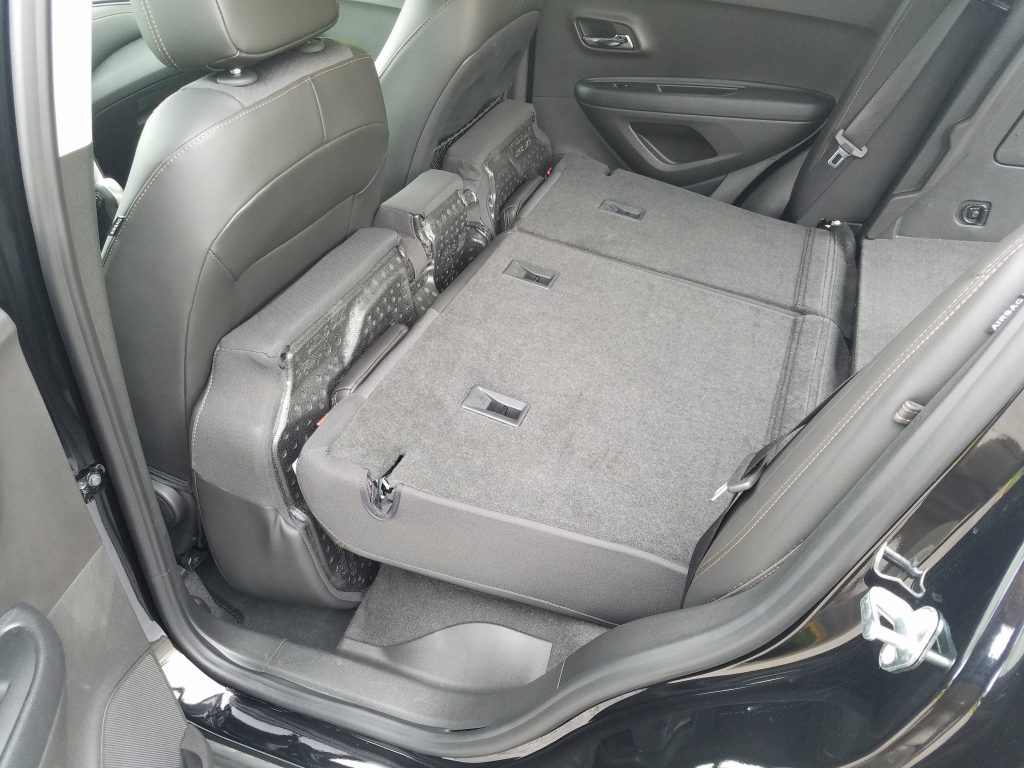 … if you can, in fact, fold the rear seat backs. You have to first flip the seat cushions forward, which can’t be done if the front seats are far back; here, they’re at about the mid-way point.

And while we’re on the interior, it’s worth mentioning that there’s little in the way of soft surfaces, as even the door armrests are not so much padded as just “flexible” hard plastic. If you want something spiffier, you might consider stepping up to the Trax’s better-dressed (but more expensive) Buick Encore cousin. But on the positive side, the control layout is about as simple and usable as they come these days, now that “simple” and “usable” are no longer givens.

The Trax’s powertrain remains marginal. Don’t let its “turbo” labeling fool you; the 1.4-liter engine provides just 138 horsepower — meager even for the subcompact crossover class — meaning it’s no thoroughbred. Furthermore, power delivery isn’t great in a full-throttle launch (which is typical of small turbos), and though it picks up at mid speeds, it tapers off again before reaching highway speeds. Furthermore, while the “conventional” 6-speed automatic transmission provides decently quick downshifts when the throttle is stabbed while underway, the turbo engine tends to deliver no power and then — all of a sudden — too much, making it difficult to modulate acceleration in traffic.

Acceleration is adequate but not much more, as 9.9 seconds 0-60 is on the slow side for the class.

Our test Trax averaged about 9.9 seconds in the benchmark 0-60-mph sprint, somewhat on the slow side for the class. However, it also averaged 27.7 mpg in about an even mix of city/highway driving, a good showing.

While handling and maneuverability rank high, ride — at least on the Redline Edition tested — was somewhat stiff and jumpy, with loud tire thumping over bumps. Some of those issues were probably related to the Redline’s 18-inch wheels, which replaced the standard 16s that may well provide a better, quieter ride.

While its 2017 freshening brought some needed advanced safety features, too many are reserved for the top-line Premier trim level, which resides above the base LS and the mid-line LT tested here. That includes forward collision warning and lane-departure warning, the former of which — in particular — has been shown to greatly reduce accidents. Also standard on the Premier — and optional on the LT — are blind-spot alert, rear cross traffic alert, and rear park assist. All told, that’s a fairly complete list, but even the front-wheel-drive Premier starts at more than $28,000, with AWD adding $1500, as it does on all trim levels. For reference, the base front-drive LS starts at about $22,000, the LT at about $24,000. 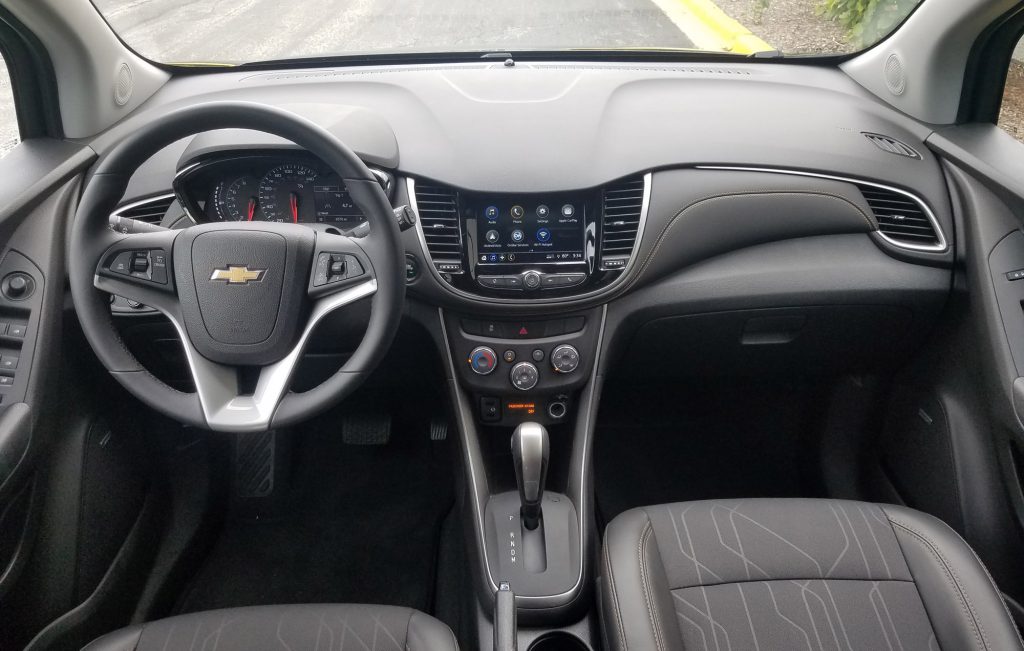 Interior materials aren’t much to crow about, but interior storage space is, ranking as a Trax strong suit.

Our test vehicle was an LT fitted with the Redline Edition Package, which adds black trim and black 18-inch wheels for $1350. Also along for the ride were the $1400 Sun and Sound Package (sunroof and Bose audio system) and the $450 LT Convenience Package that adds 6-way power driver seat, keyless access and starting, and cloth/leatherette seat trim. 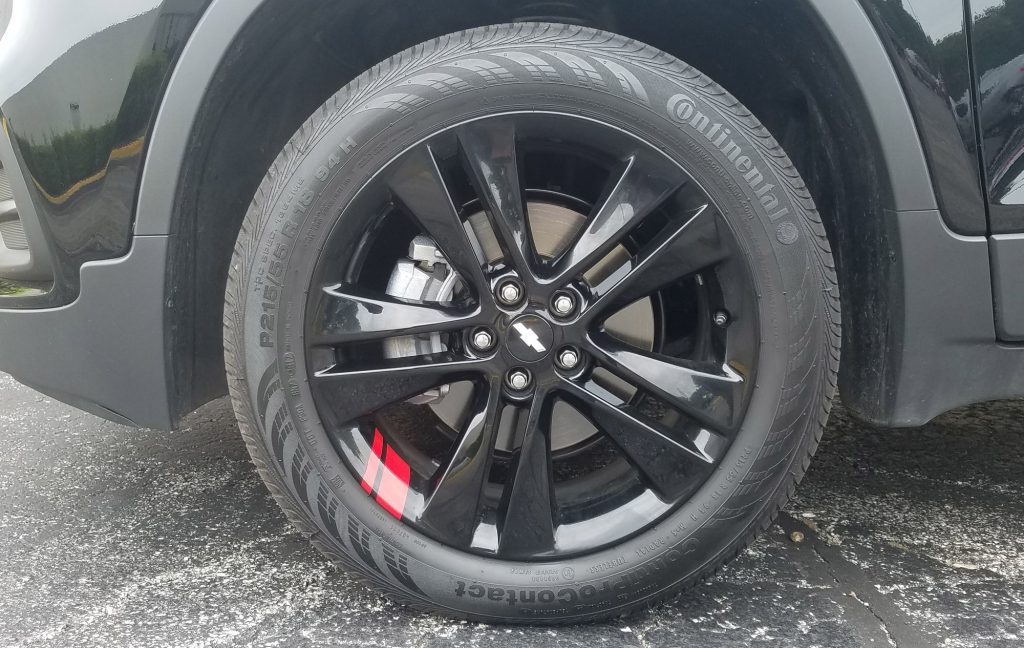 The 18-inch wheels included in the Trax Redline Edition Package may look neat, but their low-profile tires probably hurt the ride over the standard 16-inchers.

Not only is that a relative bargain, but the “6-way power driver seat” includes a power-tilt cushion, a potential comfort plus. (Oddly, the seat back adjustment is manual.) Notable standard features on the LT include Apple CarPlay/Android Auto, satellite radio, and GM’s OnStar assistance system.

When introduced for 2015, the Trax was a big fish in a very small pond. Since then, however, the subcompact-crossover class has exploded from four vehicles to 14 by our count, meaning the Trax has gained a bunch of competitors. Most notable among these are the Honda HR-V (big on space), Hyundai Kona (big on value and features), Mazda CX-3 (sporty), Mitsubishi Eclipse Cross (techy), and Nissan Rogue Sport (good all around). But Trax is still a leader in interior packaging and storage space, and remains competitive in features and value for the dollar.

It’s getting dated by a flock of newer competitors, but the Trax still offers quite a lot to attract the growing masses of subcompact-crossover shoppers.