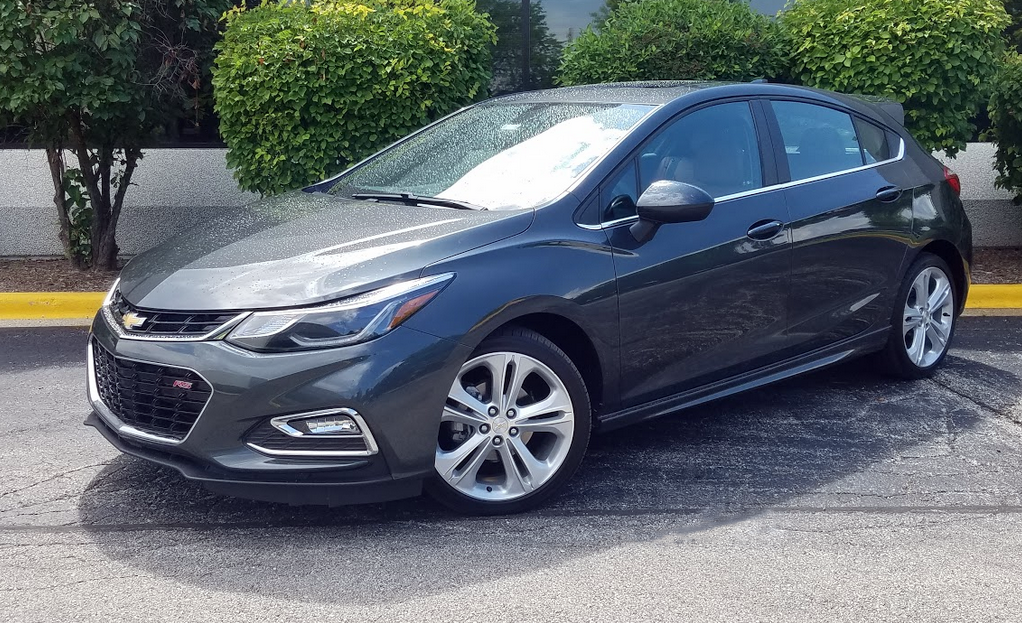 The great: Improved fuel economy with little sacrifice in performance or quietness

The not so good: Price premium for diesel engine

Everything is even-steven at last where the Chevrolet Cruze is concerned. When the compact car was totally redesigned for 2016, it appeared solely as a sedan, only to be joined by hatchback for the following season. By then, though, the sedan had picked up an available turbodiesel engine. Now, for 2018, the hatchback adds that powerplant to go along with the carried-over 1.4-liter gas engine. 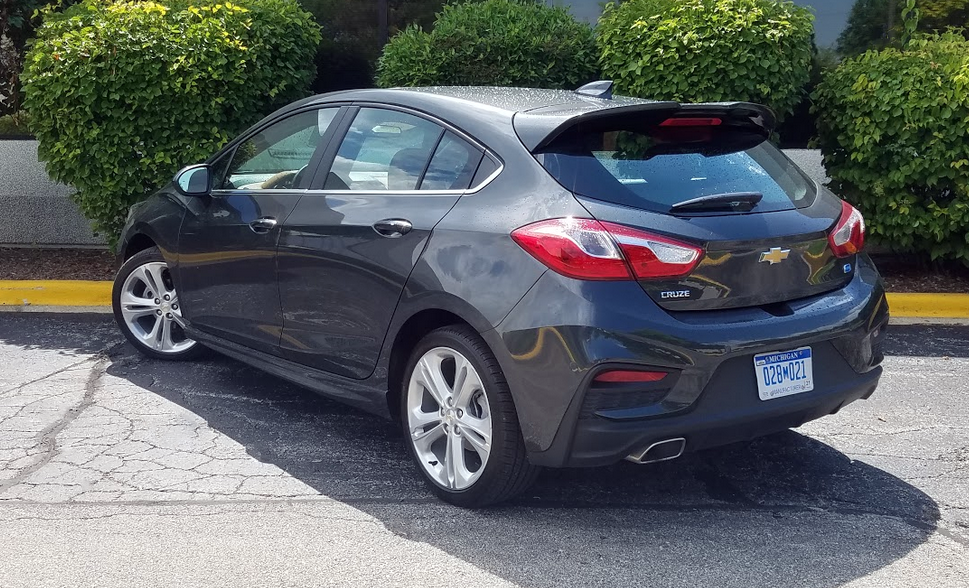 The 1.6-liter turbodiesel promises—and seemingly delivers—improved fuel economy compared to the gas engine. Both are matched with a 6-speed manual transmission as standard equipment, but where the optional automatic for the gas engine has six speeds, the diesel’s available autobox has nine.

Gasoline-fueled Cruze hatchbacks come in a choice of LT or Premier trim levels but the diesel is confined to the LT. Consumer Guide tested an automatic-transmission diesel hatch, which has a base price of $26,740 with delivery. However, a trio of 4-figure option packages—including an RS sport-appearance group—boosted the final tally to a costly $31,370.

In optioned-up form, the Cruze’s interior has a pleasantly upscale feel–particularly with the eye-catching “Kalahari” leather upholstery. The rear seat offers OK legroom for the class, but the sloping roofline means headroom is stingy.

EPA mileage estimates for the turbodiesel/automatic team are 30 mpg in the city, 45 on the highway, and 35 combined. That’s only a slight gain over the gas/auto pairing in the city, but considerably more on the open road. This driver recorded 31.5 mpg after driving the diesel for 193 miles, 65 percent of that under city conditions. The gas-engine Premier hatchback he sampled in 2017 got 29.4 mpg, even with slightly less city driving to boot.

From a performance standpoint, the turbodiesel is stronger than it is quick. Its 137 horsepower is 16 less than the gas engine has on tap, but after a moment of turbo lag 240 lb-ft of torque get the Cruze hatch going in good order from a standstill, and help it to establish a commendably steady pace on the highway. The transmission runs through the gears with hardly a reminder that it’s there, and it kicks down snappily for expressway passing. Best of all—especially for a diesel—the engine is fairly quiet.

As for driving behavior, there’s a confident, “planted” feel to the hatchback. It steers with better-than-average precision, and corners without much body roll. Ride benefits from good bump absorption. 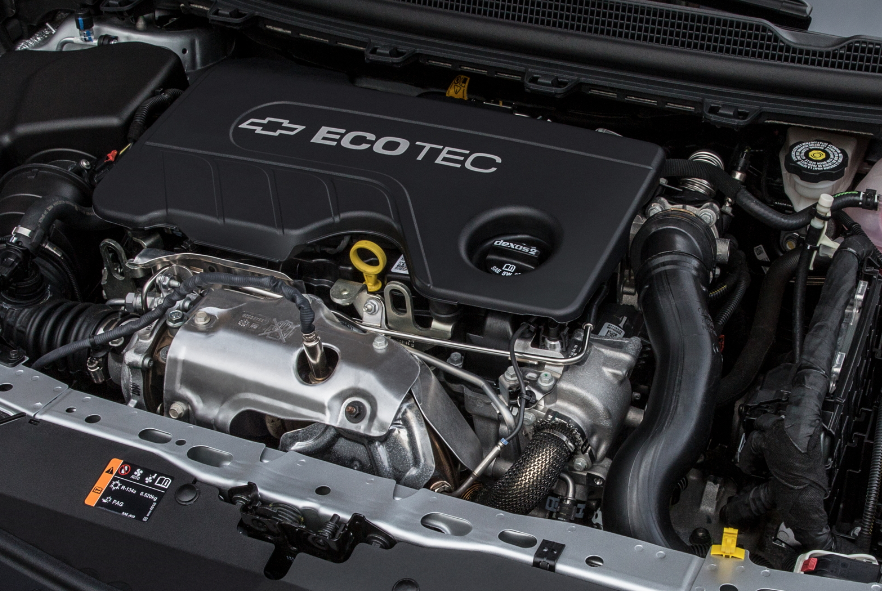 The 1.6-liter turbodiesel engine puts out 137 horsepower and a healthy 240 lb-ft of torque via a nicely tuned 9-speed automatic transmission.

Reddish-brown “Kalahari” surfaces alternated with Jet Black to lend an upscale appearance to the test car’s cabin. Some areas on the face of the dashboard, the door centers, and the console-box lid are padded. The rest of the dash and doors are stiff plastics but they use a matte “soft paint” surface that visually blends in with the genuinely flexible interior materials. Instruments are grouped into a “dog-bone” cluster like that in some other Chevy vehicles. Between the ends with the speedometer and tachometer dials resides a legible vehicle-information display. The MyLink touchscreen is fairly uncomplicated to move through and operate. Rotating knobs on the climate controls set temperature and fan speed; buttons manage other functions.

Glove-box space isn’t bad but volume of the console box is quite limited. Storage pockets in the doors are on the modest side, too. A single pouch on the back of the front passenger seat offers a little utility to rear-seat occupants. Little hinged doors at the front of the console open to expose a joint USB/auxiliary-jack port on the left and a 12-volt power point on the right. Two exposed cup holders occupy the center console, with two more in the fold-down rear armrest.

Front-row passengers will find pretty good room for a small car. Headroom is not cramped, even under the sunroof. If front-seaters don’t need to take up all the legroom available to them, average-height adults in the back seat will have enough stretch-out space to be comfortable. Unfortunately, the slope of the roof shaves some rear headroom, and a bit a ducking and twisting is necessary for entries and exits by grown-ups. At least the doors open wide. Thanks to a flat floor, three adults might squeeze into the rear seat, but the middle rider shouldn’t be the tallest of the three.

The hatchback body does prove its worth for cargo flexibility. There’s a fairly tall lip at bumper level but the liftgate opening is wide. The load floor is flat throughout, while the sides are squared off. Rear seats, which are divided in a 60/40 split, extend cargo capacity from 22.7 cubic feet to 42.7 cubic feet when retracted. The seat backs fold almost flat, but rest at a slight offset above the main cargo platform.

Compact-car buyers can save a bit of money on fuel by selecting the Chevy Cruze hatchback with the diesel engine. However, if they want all the luxury and tech that they can get, then they’re going to burn up some of those savings in purchase cost. It all evens out in the end. 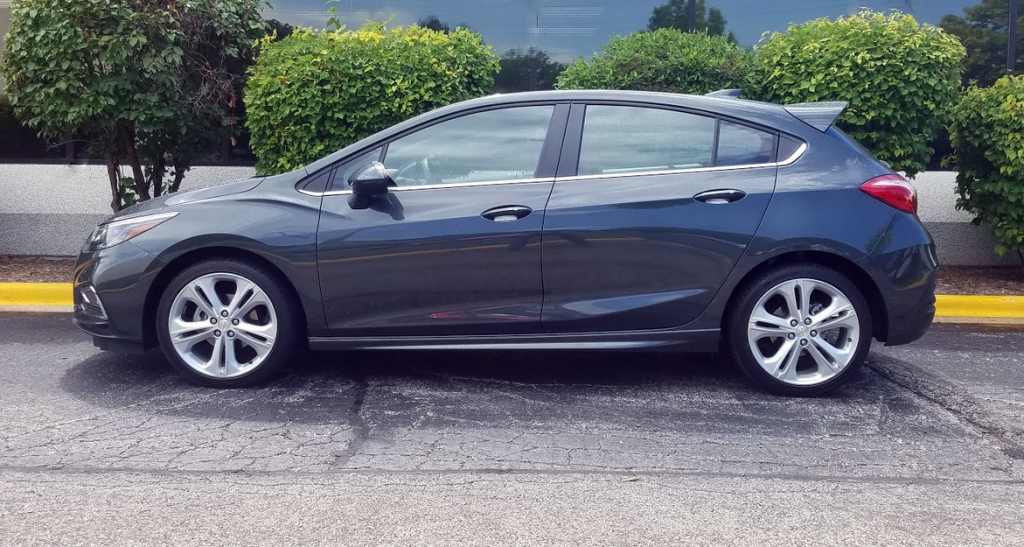 The Chevrolet Cruze Diesel delivers notably better fuel economy than its gas-engine siblings, especially if you do a lot of highway driving. Those superior numbers come with very little cost to all-around performance, quietness, and refinement, but you’ll pay a significant premium for the diesel engine.