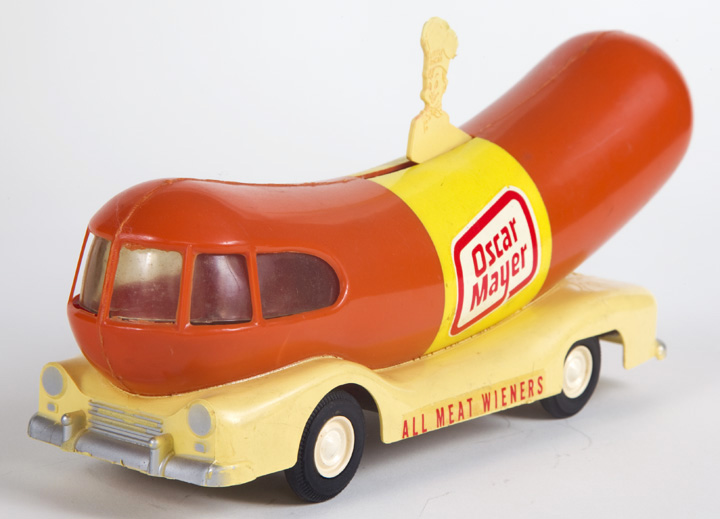 This 1/25-scale Oscar Mayer Wienermobile is about 10 inches long and is based on the circa-1952 Wienermobile design.

There is a subgroup of model cars known as promotional, or promo, models. As the name implies, promos are typically meant to be promotional items for a particular product, usually a car or truck. Rather than kits that need to be put together, these models almost always come fully assembled. Since the first models of this type were released in the late 1940s, they have usually been in 1/25 scale and made of plastic. Promotional models also have been made for tractors, construction equipment, and other subjects, but one of the most unusual has to be the 1/25-scale version of a food company’s giant hot dog-shaped vehicle.

Oscar Mayer, now part of Kraft Foods, celebrated the Wienermobile’s 75th Anniversary in May 2011. The original wiener-shaped car was created in 1936 by Carl Mayer, a nephew of Oscar Mayer. According to a company press release, the hot dog-shaped vehicle was used to promote the Madison, Wisconsin, company’s products at grocery stores in the Midwest. Today, Oscar Mayer operates a fleet of six traditional-sized Wienermobiles, along with a smaller one built on a Mini Cooper chassis. The street-legal sausages travel the country and several foreign lands. 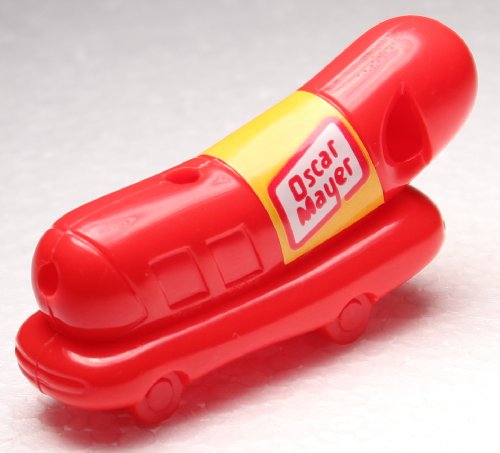 You may not have owned the model, but countless kids enjoyed the shrill note of the Wienermobile whistle.

The first postwar Wienermobile design appeared in 1952, and soon it also appeared as a 1/25-scale promotional model car. Like many fine sausages, the toy Wienermobile was made in Wisconsin. Milwaukee-based Product Miniature Company (PMC) made them along with many different promos for companies including Chevrolet, International Harvester, and Nash.

The original PMC Wienermobile in my collection has a plastic body, stamped steel chassis, and rubber tires mounted on plastic wheels. When the model is rolled on its tires, a plastic “Little Oscar” figure raises and lowers from a slot on the top of the sausage. I’m not completely sure how these models were distributed, but I’ve seen a display card that advertised that the toy was available by mail for $1 plus the printed bands from two one-pound packages of wieners. What a deal!

Sometime during the 1980s, the Fifties-era Weinermobile was reissued. The newer models are easy to identify because the toy was repurposed as a bank. Also, the reissues didn’t include Little Oscar, were missing the red lettering on the sides of the “bun,” and used a plastic chassis instead of the original steel unit.

During the 1990s, Oscar Mayer released two completely new 1/25-scale Wienermobile banks. One in my collection wears stickers promoting the 1992 Olympics. A new breakfast of champions, perhaps? These newer promos are similar in size and concept to the original but look like the Wienermobiles then touring the country.

I have to admit that I can’t remember the last time I bought—or ate—an actual Oscar Mayer hot dog, but I’ve enjoyed collecting the models that they have inspired. I’ve seen a couple of the real ones on the road this summer. How can a giant rolling hot dog not bring a smile to your face? Maybe one of these days I’ll get the chance to drive one.

The Wienermobile promo was made by Product Miniature Company in Milwaukee, Wisconsin.