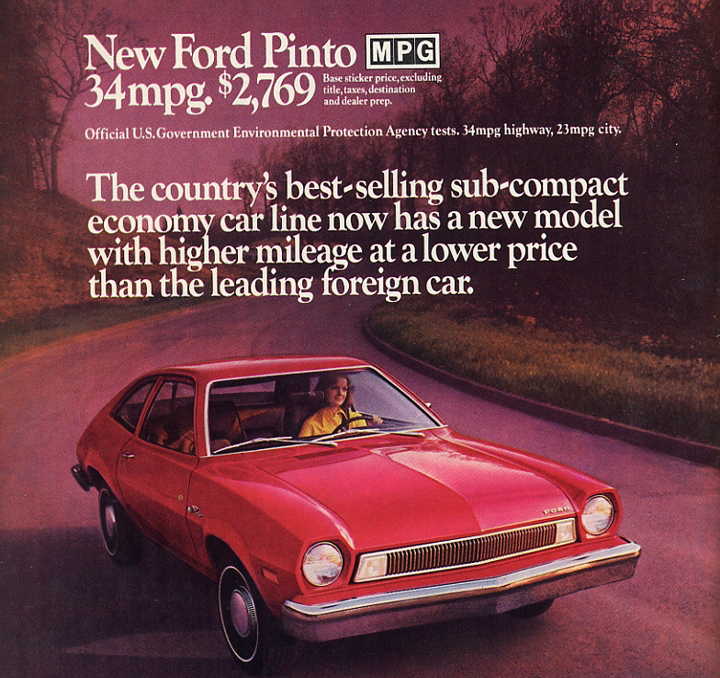 Inflation can play tricks on you. Look at the ad above and try not to feel nostalgic for new cars that could be had for less than $3,000. Truth is, assuming you could find a stripped model like the one above, and that you didn’t overpay for the Rusty Jones undercoating, you probably could sneak out the door with a Pinto “2-door sedan” for right around three large.

Interesting fact: Sometime in the last year or so, the average transaction price on a new vehicle sold in the U.S. crossed the $30,000 threshold. That means that the Pinto advertised here sported a retail price that is less than 10 percent of what you and I would likely pay for a new ride today.

Obviously, I am about to make a point. The point is this: Compared to compact cars now available, that Pinto was a crummy deal. Allow me to explain.

According to a white paper published by the National Highway Traffic Safety Administration (NHTSA) in 2004, the cost of federally mandated equipment added to vehicles since 1975 in the name of safety and clean air added $839 to the retail price of each car sold in the U.S. That was in 2002 dollars. In 2012 dollars, that’s about $1,075.

The trouble is, we are nowhere near done here. Since 2002, when the abovementioned white paper was written, a number of significant safety features have been added to new cars and are now always or nearly always standard. These include antilock brakes, side airbags, curtain side airbags, traction control, antiskid system, and side-impact protection.

Additionally, our Pinto is woefully low on equipment when compared to a modern compact car. That lowball price includes a 4-speed manual transmission, not a 5-speed unit. Nor does it include air conditioning, a radio, or even a passenger-side rearview mirror.

So, what would a 2013 update of the Ford Pinto cost today? Let’s do some math:

Note: These price estimates came from a number of sources and are likely pretty rough. Still, for our purposes they should suffice.

Of course, there are dozens of little things not on this list that would further up the cost. Our bargain Pinto came with rubber floor covering, not carpet. The seats were rubbery vinyl. And those wheel covers wouldn’t cut it today.