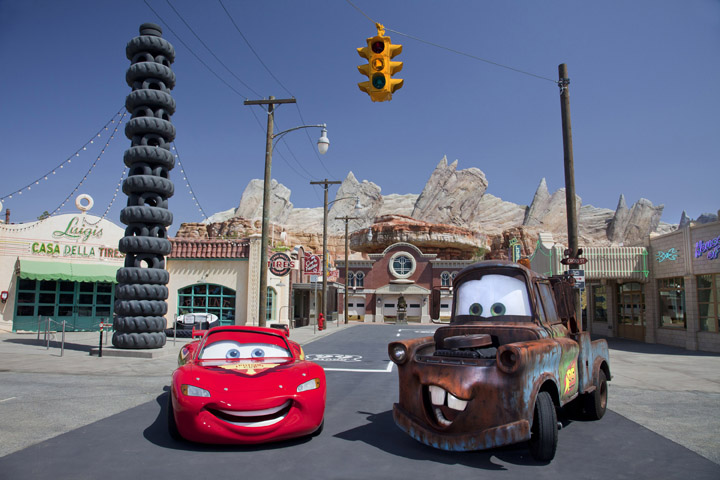 Mater and Lightning McQueen pose for a picture in the “Cars”-themed area in Disneyland’s California Adventure theme park. The vehicles cruise up and down the streets and greet visitors.

There’s no denying that Disney/Pixar’s Cars is one of the best “car movies” ever produced. Its level of detail and historical accuracy is stunning. Real vehicles that actually exist (or did exist) are depicted in their correct, true-to-life form. It is so well done that it stands in stark opposition to many other “car movies” in which the filmmakers sometimes took certain liberties with automotive facts, features, or capabilities for the sake of the storyline. Most viewers won’t notice, but “car people” always do. The movie was a huge hit and will likely continue to delight viewers for generations to come.

I’m a car person and have been my whole life. I loved Cars and rewatch it every once in a while to appreciate its charming characters, vehicular-themed jokes and gags, and depth of detail. With this in mind, you can understand my excitement when I read about a Cars­-themed area at Disneyland’s California Adventure theme park. Cars Land, as it’s called, consists of a picture-perfect, life-size reproduction of the film’s town, called Radiator Springs, a fictional, sleepy town set along historic Route 66 in the southwestern U.S. All the buildings are there: the Cozy Cone Motel, Fillmore’s Taste-In, Flo’s V8 Café, Luigi’s Casa Della Tires, Lizzy’s Radiator Springs Curios, Ramone’s Body Shop, and Sarge’s Surplus Hut. The Cadillac Mountain Range and Ornament Valley are included too, in all their glory, as the backdrop to the town. And, in true-to-movie form, the signs for the town’s businesses are equipped with neon lighting. When the sun goes down, the town lights up!

In addition to these props, there are a few themed rides, including one called Radiator Springs Racers. Riders sit in a six-person vehicle and essentially ride through a depiction of the entire movie, complete with sets from the movie and animatronic characters. The attraction culminates in a race between two of the vehicles. Guests ride along and experience the thrills of a race through the desert just outside of Radiator Springs; vehicles rocket around the “desert” at speeds up to 45 mph.

Another ride takes place at Luigi’s Casa Della Tires. Guests sit in a large, round, three-person vehicle that looks like a big tire laid down on the ground and glide around on a surface that acts like an air-hockey table. Also in Cars Land, Mater’s Junkyard Jamboree allows visitors to take a ride aboard a trailer pulled by a farm tractor that whips around in circles while Mater sings a square-dance tune.

In addition, Lightning McQueen and Mater, rendered as life-size vehicles, often drive down the streets of the town.

While I haven’t experienced the park for myself, I really want to! I think it’d be thrilling to step into one of my favorite movies. Call me a big kid, but I’m a big kid who loves cars. And Cars.

This section of Disney’s California Adventure park opened in June 2012. 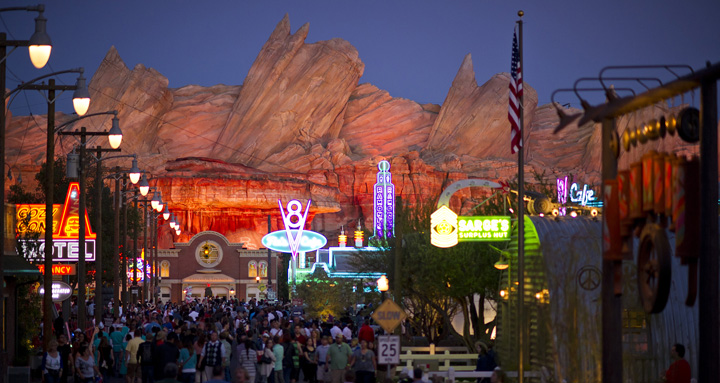 The town of Radiator Springs is faithfully recreated in life-size format. 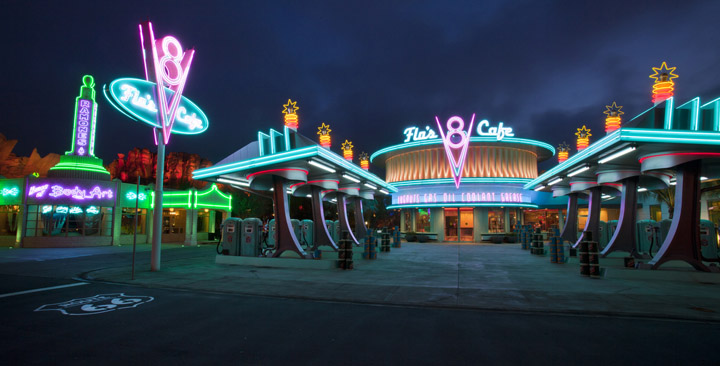 Flo’s V8 Café is a restaurant with indoor and outdoor seating. The red rings around the pistons and spark plugs on the roof flash on and off in the firing order of a V8 engine. Next door, Ramone’s House of Body Art was inspired by a gas station found along the real Route 66. 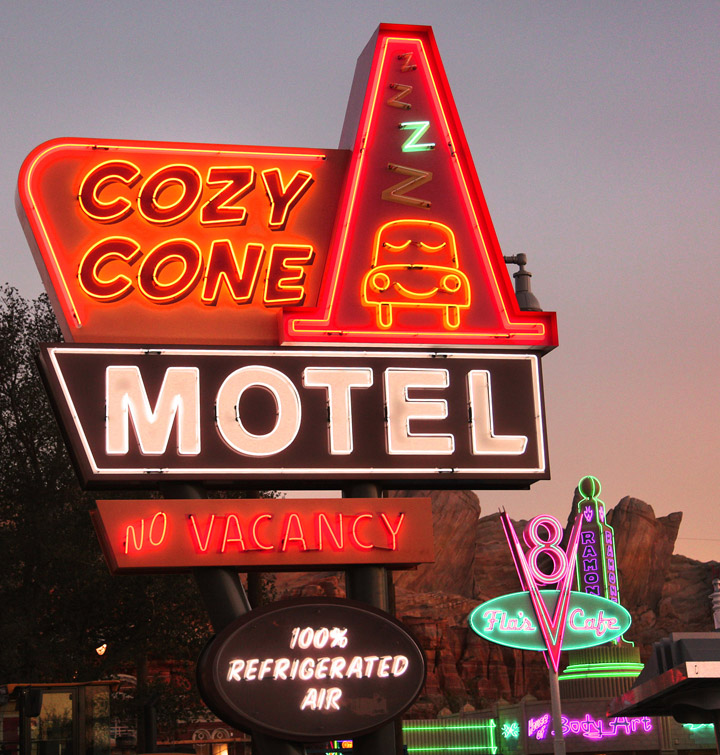 The Cozy Cone Motel’s sign features white “Zs” that light up in sequence.