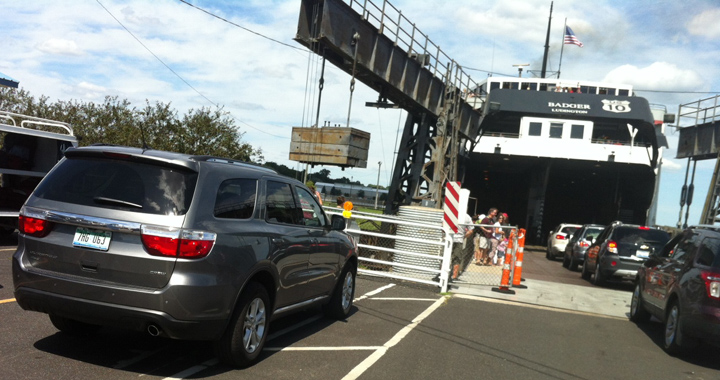 Entry to the SS Badger car ferry is via a hatch at the rear of the ship.

This past Saturday, I did something I’ve been dying to do for several years now: take a car ferry across Lake Michigan.

The boat that caught my fancy, the SS Badger, has been ferrying vehicles, and people, since 1992. Before that, the ship was a train-car ferry, and the rails those cars rode on into the boat are still visible on the cargo hold’s floor. At 410 feet in length, the Badger isn’t an especially large ship; still, the hold has space for up to 140 vehicles.

Vehicle access to the ship is via a huge rear hatch, visible in the picture above, that lowers as the Badger departs port. Passengers aren’t allowed to drive their cars onto the ship; instead, they must hand over their keys while boarding.

The ship runs exclusively between Manitowoc, Wisconsin, and Ludington, Michigan. During summer months, the ship crosses the lake four times each day, leaving the Wisconsin side at 2:00 p.m. and 1:00 a.m., and the Michigan side at 9:00 a.m. and 8:30 p.m. The crossing schedule is eased back during the off-season.

Once aboard, the first thing you’ll want to do is call a decorator—a decorator and a food-service company. The ship looks very much like what it is, a cargo vessel that was rather amateurishly, and budget-mindedly, outfitted for passenger use.

The much-hyped restaurants amount to a dimly lit buffet that looks and feels like a prison food queue and, deeper in the ship, a snack bar-style food counter that pumps out the soggiest, blandest pizza slices I’ve ever had the privilege of paying for. 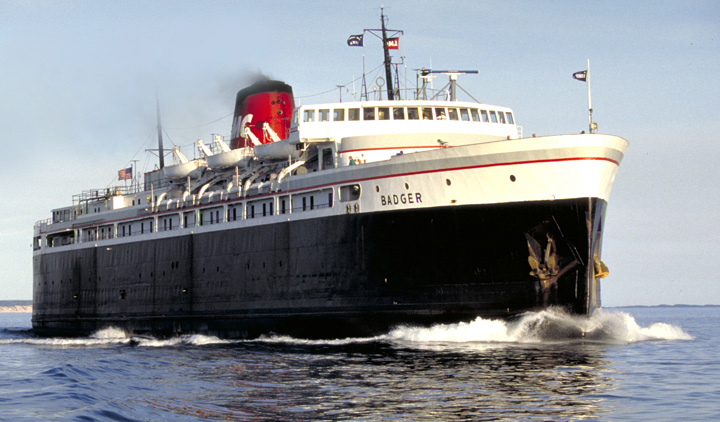 The Badger is the only coal-fired ship operating on the Great Lakes.

Also insufferable is the live entertainment. A rather elderly gentleman with an unreliable microphone who refers to himself unironically as the ship’s steward gives it his all for four hours—all four hours. His all, in this case, is calling bingo when not sharing far too many intimate details of his personal life. There is a fine line between folksy homespun charm and painful-to-witness navel gazing, and that fine line is crossed here. Perhaps not surprisingly, of the dozen or so people actually paying attention to the “show,” most were actively heckling the guy.

Other features of the Badger advertised and wildly oversold on the ship’s website include the movie theater (a room roughly 12′ × 20′ that includes a 36″ TV), the kid’s playroom (a bunch of used-up plastic backyard toys covered with the grime of a thousand snotty fingers), and the quiet room. The latter is combined with some sort of ill-conceived museum that lacks sufficient space for maneuvering between displays.

Then, there’s the smell—the acrid, sinus-piercing stench of burning coal. The smell is pervasive, yet the odor’s intensity varies wildly between rooms and chambers on the ship. The fact that the Badger is coal-fired comes as no surprise to passengers loading on the Wisconsin side, as the Manitowoc dock is bordered on one side by great heaps of the chunky black stuff.

Turns out that coal is an uncommon fuel on the Great Lakes these days, uncommon to such a degree that the Badger is the last ship on the Lakes to burn the nasty stuff.

The folks who operate this ship have somehow gotten the EPA to grant the vessel an exemption from the laws that forbid the use of coal as fuel on the Lakes. The operators argue that the Badger’s operation has nostalgic and historic value, and that conversion to diesel would diminish the historic significance of the ship’s operation.

I would argue that the Badger would be an unpleasant creaky old boat with or without the coal, and that any action taken to diminish the smell, and the coal ash (more on that in a moment), would go some distance to building repeat ridership, but what do I know?

But, as disappointing as the ship accommodations and aromas are, none of them matter one whit. Because if you’re inside the ship, you’re missing the lake, and on a nice day Lake Michigan is truly magnificent.

First-time cruisers are warned here that there aren’t sufficient deck chairs to accommodate every passenger. An early arrival is the only way to make certain you situate you and your crew for optimal scenic ingestion.

Situating is key, as you’ll want to be on the sunny side of the boat, which hopefully is the non-exhaust side. As it turns out, not only is coal smelly, it’s filthy, and the coal ash on this ship ranges anywhere from being an amusing annoyance to being frustratingly gross. Though the ship’s smokestack rises an easy 50 feet in the air, the wind tends to whip the black dreck back down to the ship’s deck—at least it did on the day we were onboard.

We found that sitting on the starboard side meant having the wind in our faces, and thus being soot-free and enjoying the sun as well. After exploring the vessel to our satisfaction—a tour that commanded maybe eight minutes—we sat down at the railing and watched the lake pass by.

The water was surprisingly calm and remarkably blue. My daughter has learned from her research that the deepest water we crossed went down about 400 feet, and that for most of the way we were in about 200 feet of the clear stuff.

To my disappointment, there is only about an hour’s time during which land is not visible on either side of the lake. I had expected to spend more time looking at a 360-degree vista of fresh water, but that moment was fleeting.

I’m not sure what it is about sitting on deck watching the lake pass by, but it’s powerfully relaxing. The ever-present throb of the ship’s engine and the wave-like surf sounds off the hull combine to optimal effect, and with the sun bouncing off the waves, it was pretty sweet. Crossing paths with a couple of freighters out in the lake was a fun bonus.

Once you’re firmly ensconced in tranquility mode, the ride seems to come to an end too soon. Fortunately, the pageantry of an over-the-top Ludington police-boat escort into port is loads of fun to watch.

Even more fun, and truly amazing, is the precision maneuvering required to sync this iron hulk with its moor. The process, which takes no more than 10 minutes, seems akin to cross-stitching your name onto a pillow while wearing welding gloves.

The lake crossing is not cheap. We paid $74 for the truck, $74 for each adult, and $24 for the kid. Younger children and seniors get a break on the fares. But for that price, you get a view like no other.

Nutshell: The accommodations and food are terrible, but it really doesn’t matter. Eat before you leave and make a point of finding the perfect place to sit and take in the splendor of a giant lake. Why anyone would waste time playing bingo instead of watching the waves is beyond me. Oh, and bring your camera. The seagull swarm that follows the boat from shore makes for an excellent stop-action challenge.

In May of 2015 the SS Badger was cleared for continued operation by the EPA. Per an agency spokesman, Lake Michigan Carferry Services Inc., operator of the Badger, “Has taken all the steps necessary to permanently stop the discharge of coal ash into the lake.”

The SS Badger remains the only coal-fired ship operating on The Great Lakes.

Motoring to the Motor City: Sometimes it’s the Journey