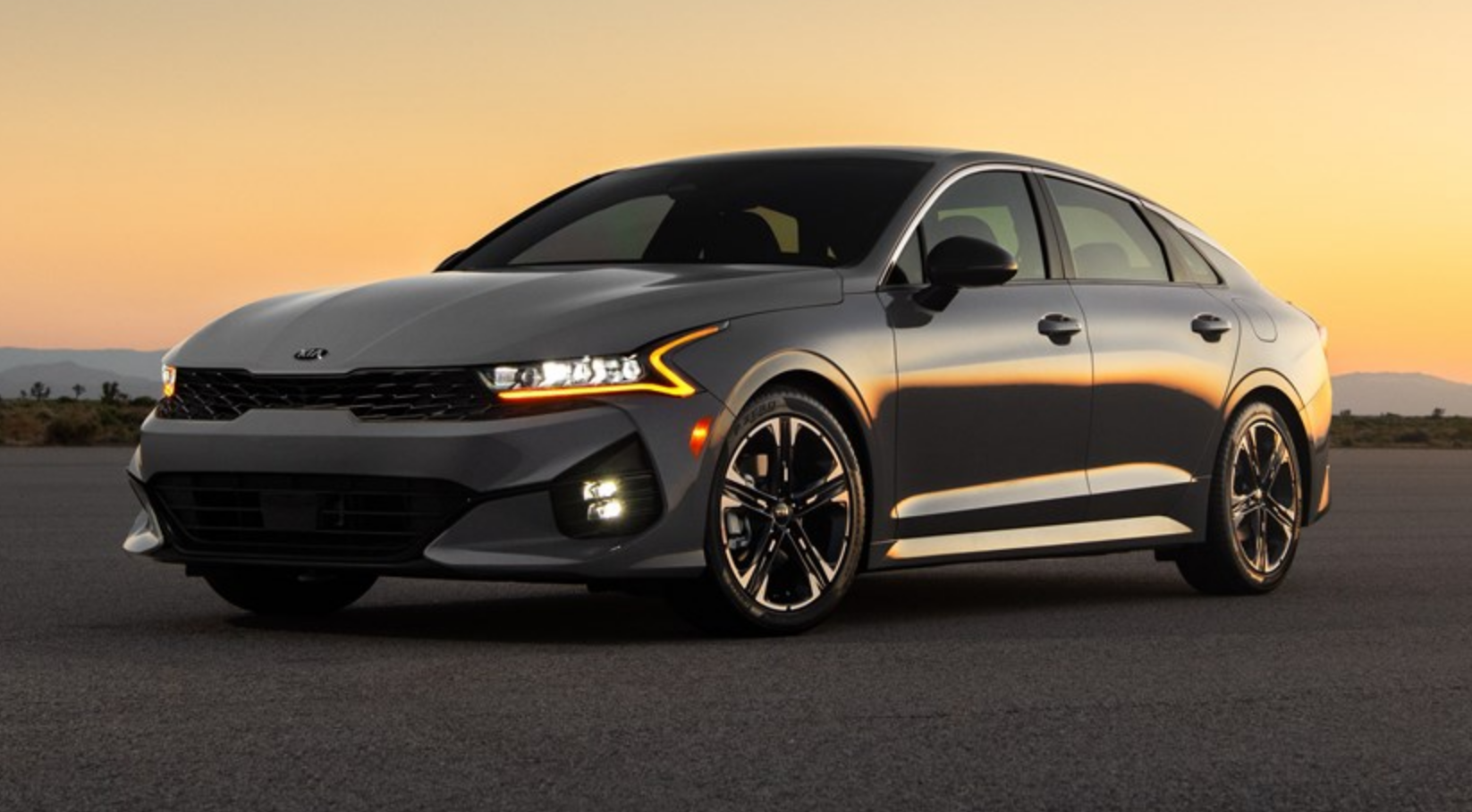 Kia unveiled an all-new version of its mainline midsize sedan today, and with it a new model name. “Out” is the Optima nameplate, replaced by a badge that Kia uses for this car in global markets: K5. “In” is dramatic new styling, available all-wheel drive, a choice of two turbocharged 4-cylinder engines, and fresh technology features.

The 2021 Kia K5 is built on an all-new “N3” platform, which is a bit lower, wider, and longer in both wheelbase and overall length than the previous-generation Optima’s architecture. Kia says the N3 platform is stronger and quieter too. 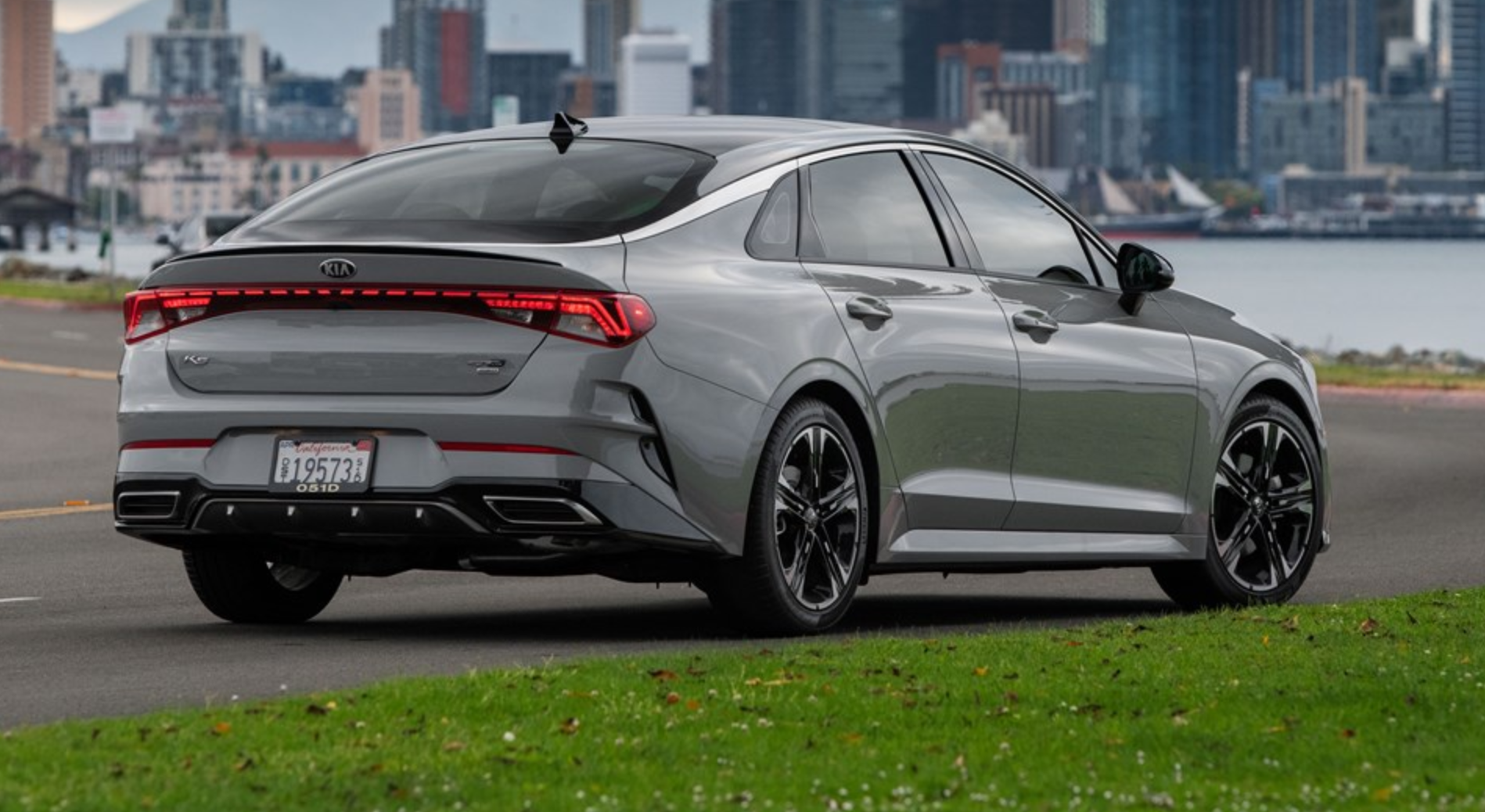 Kia says the K5’s striking exterior design incorporates DNA from its high-performance Stinger hatchback sedan, while expanding the brand’s future design language. Highlights of the new look include a “shark-skin” mesh grille, daytime running lights and taillights with a “heartbeat” shape inspired by an EKG pulse monitor, a gloss black applique on the rear trunk that emphasizes the fastback-esque profile, and a striking chrome accent strip that flows from the tops of the side windows to the forward edge of the trunk lid. The interior design is similarly sporty, with a cockpit-like horizontal layout, aircraft-style shift lever, and available flat-bottom steering wheel. 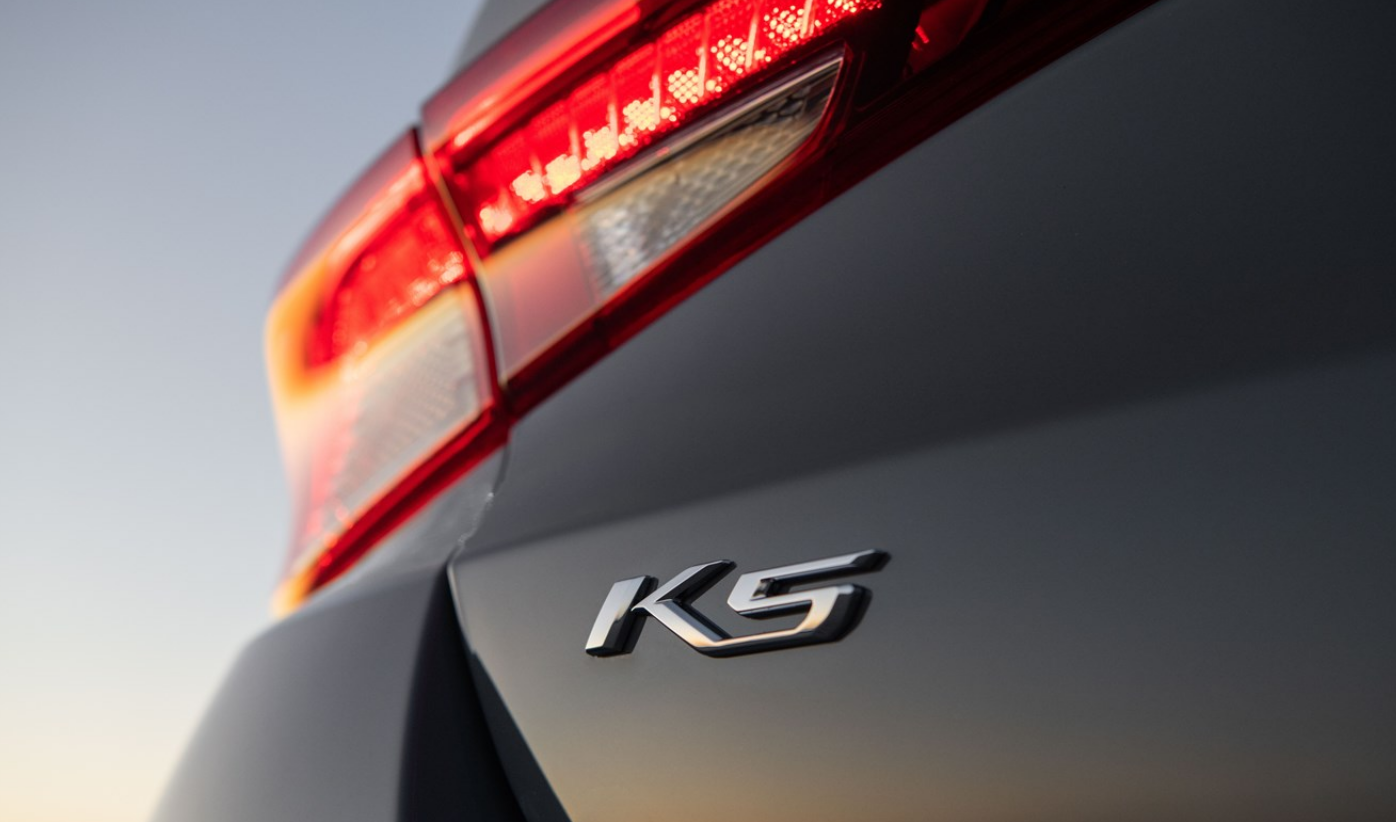 The base engine, which comes in LX, LXS, GT-Line, and EX models, is a turbo 1.6-liter 4-cylinder that makes 180 horsepower and is paired with an 8-speed automatic transmission. Optional on LXS and GT-Line is all-wheel drive in place of the standard front-wheel drive. The AWD system (the first offered in Kia’s midsize sedan) comes with a snow mode for better all-weather performance.

The performance-oriented K5 GT gets a turbo 2.5-liter 4-cylinder that makes 290 horsepower and is paired with a new dual-clutch 8-speed transmission; Kia claims a 0-60-mph time of 5.8 seconds. The GT also gets a sport-tuned suspension, 19-inch wheels on Pirelli P-Zero tires, and a Sport + setting on the drive-mode control system.

The 2021 Kia K5 is built in Kia’s West Point, Georgia, assembly facility alongside the Telluride midsize SUV. The K5 goes on sale this summer, with GT and all-wheel-drive versions following later in the fall. 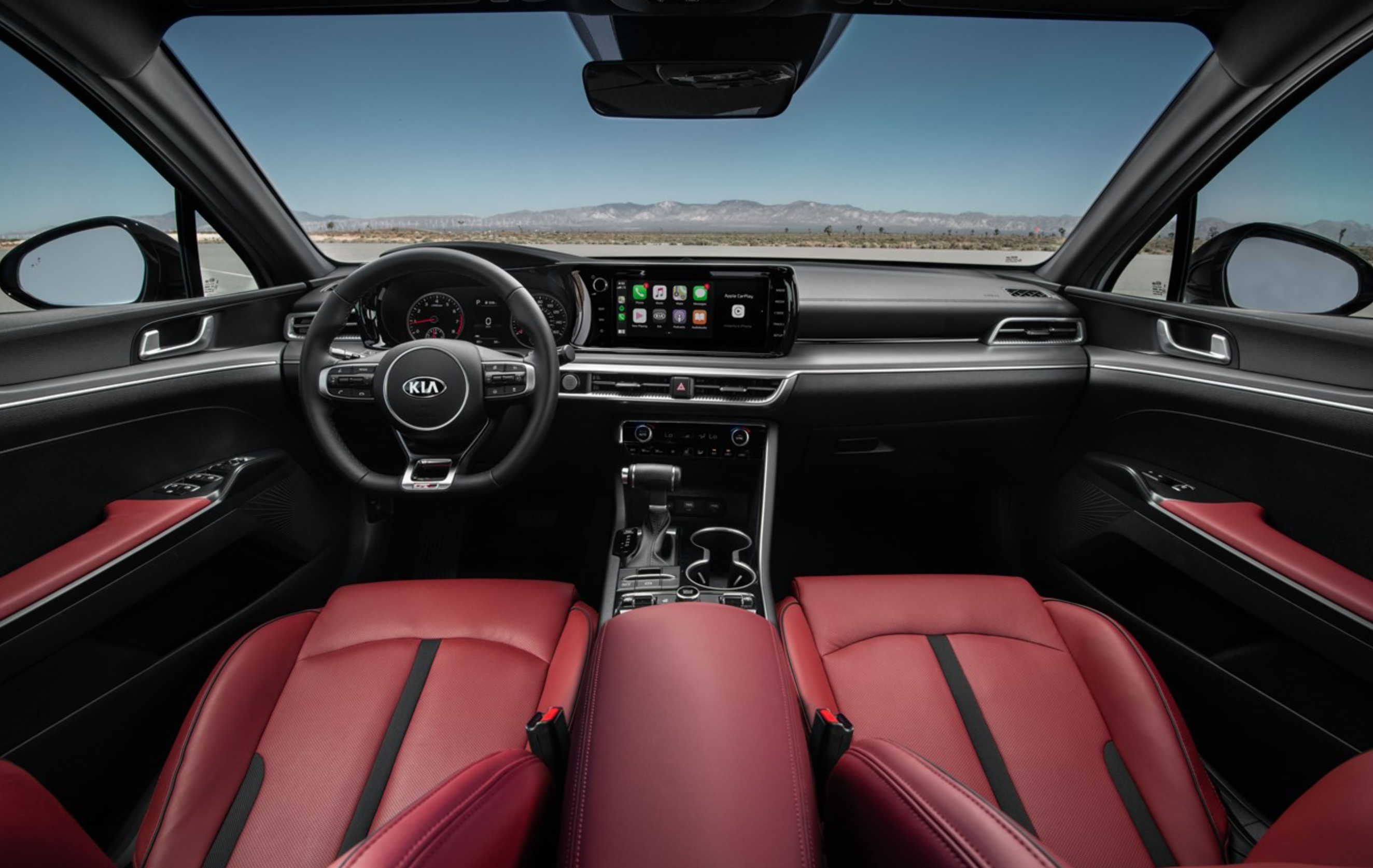 Domestic manufacturers may be turning away from traditional sedans as of late, but import brands are remaining committed to this declining, but still vital, market segment. Kia’s press presentation for the K5 noted that there were 1.5 million midsize cars sold in America last year. With crossover SUVs taking over as the default family vehicles of choice, we’ve seen the latest iterations of traditional midsize sedans get more style-forward and performance-focused. The 2021 Kia K5 is in keeping with that trend. The K5 shares is basic architecture with the redesigned-for-2020 Hyundai Sonata, but there are significant differences in powertrain/feature availability between the two, and the interior and exterior styling is likewise completely different. The K5 strikes us as the sportier, more driver-oriented choice.

We’re not quite sold on Kia’s decision to ashcan the Optima name in favor of K5. Though the change better aligns with Kia’s global presence with this car, there was nothing wrong with the Optima name, and alphanumeric monikers have had a spotty success rate in the U.S. market. Names aside, the K5 strikes us as a winner overall. 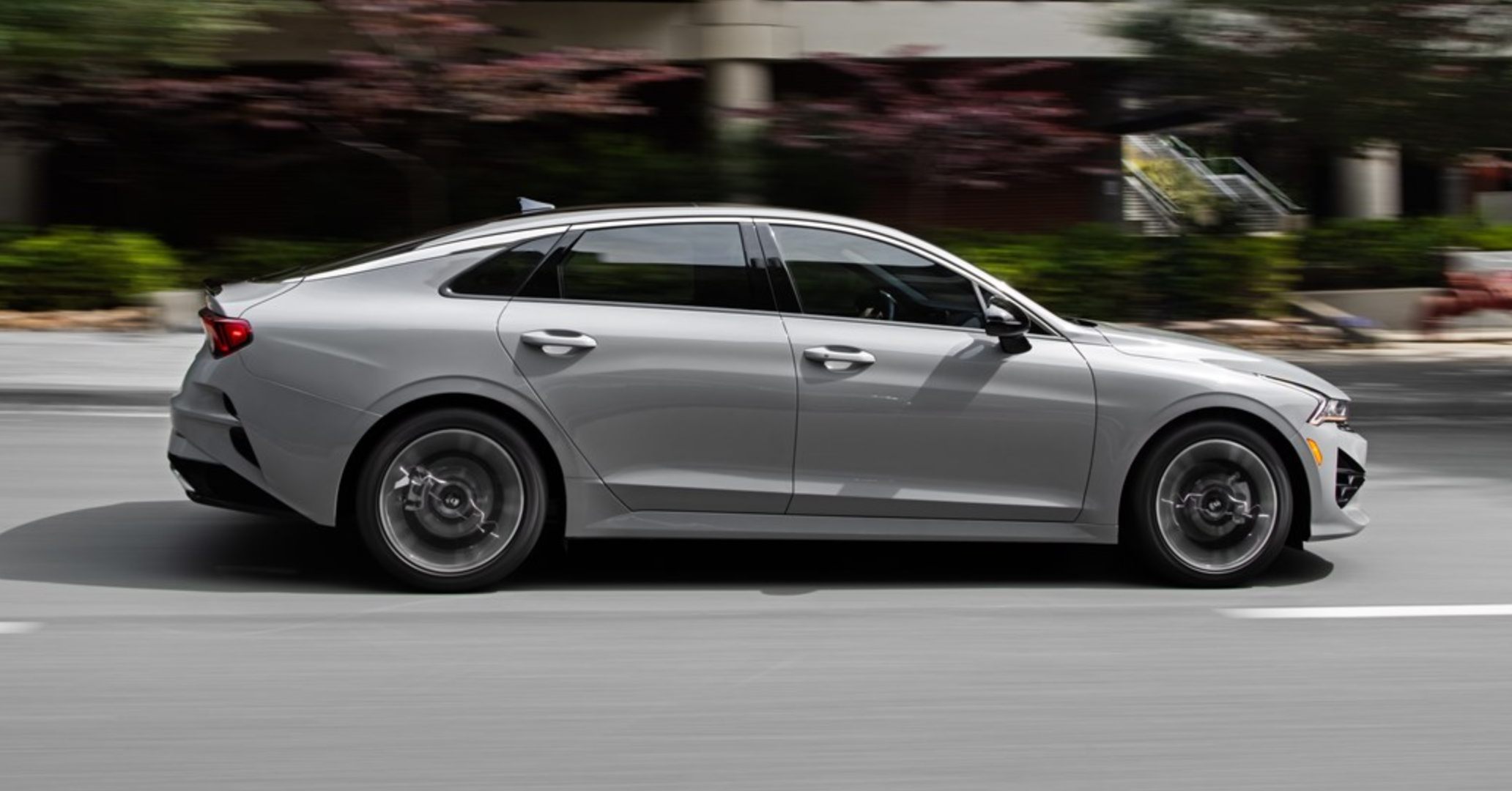 Check out the Car Stuff Podcast