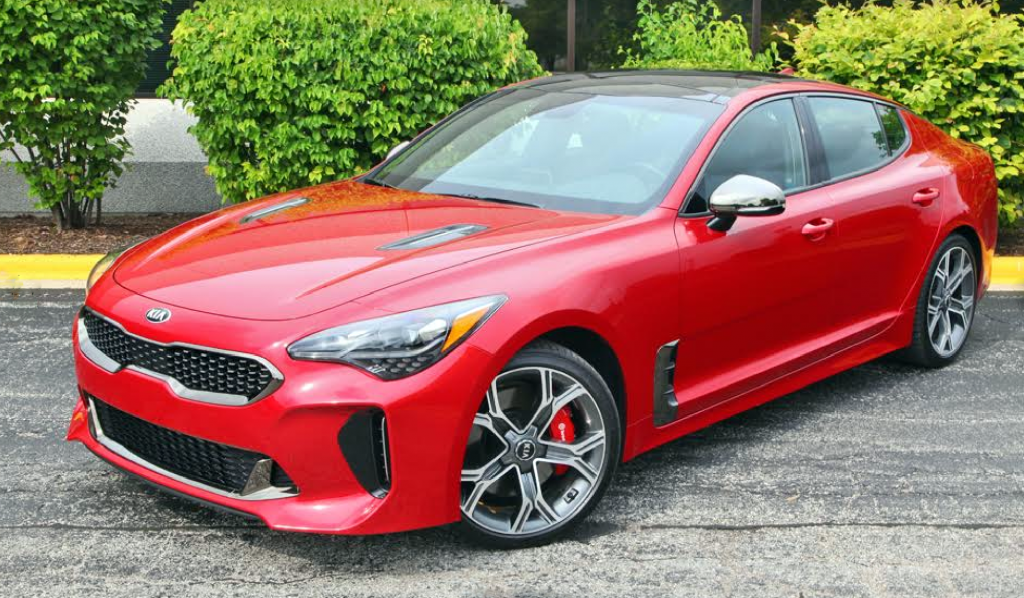 The great: Impressive horsepower and hardware for the money; cargo utility of hatchback body style

The good: Sleek, eye-grabbing styling inside and out

The not so good: Doesn’t quite match the performance and handling refinement of premium-brand rivals; fastback roofline compromises rear visibility and rear-seat headroom

No two cars are exactly alike, even if they are the “same” car.

Consumer Guide editors have now sampled two copies of the V6 Stinger GT2, Kia’s new-for-2018 premium-midsize hatchback sedan and a would-be BMW competitor. The only differences between them were paint and upholstery colors. Otherwise they were equipped and priced just the same, which is to say with all-wheel drive and no options for $52,300 delivered. However, they weren’t exactly two peas from the same pod. 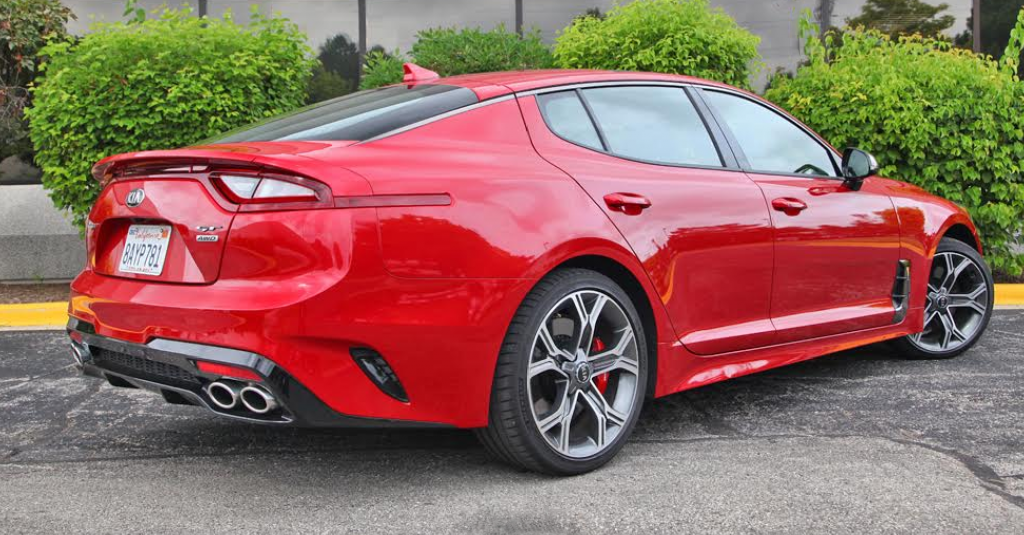 This latest Stinger test car arrived with 6006 miles on the clock. That seems very new, but the car exhibited slight interior rattles and surface-on-surface squeaks of a kind that our editors didn’t remember from their first crack at a Stinger. Compared to a $61,495 BMW 540i xDrive—the tested Kia’s closest match in terms of engine and drivetrain—the GT2 seems like a bargain, all the more so considering it comes with a number of standard amenities that have to be added to the Bavarian Wunderwagen. But racking up the miles listening to cabin noises will either make the Bimmer’s price seem less onerous or make the Kia’s seem too high.

The Stinger’s cabin has a sporty, appropriately upscale look, with lots of swoopy design touches and handsome satin-finish accents. Rear-seat space is a bit disappointing for a car with a footprint this large–the sloping fastback roofline intrudes on headroom, and legroom quickly grows scarce as the front seats are adjusted rearward.

Another way the second Stinger test car was different from the first was in observed fuel mileage. Total distances covered in the two tests varied by just 14 miles, but even with a greater percentage of city-type driving in the second test, aggregate mileage improved by more than half a mile per gallon, coming in at 18.5 mpg. Unfortunately, that’s still short of the EPA city-mileage estimate of 19 mpg for a V6 Stinger. 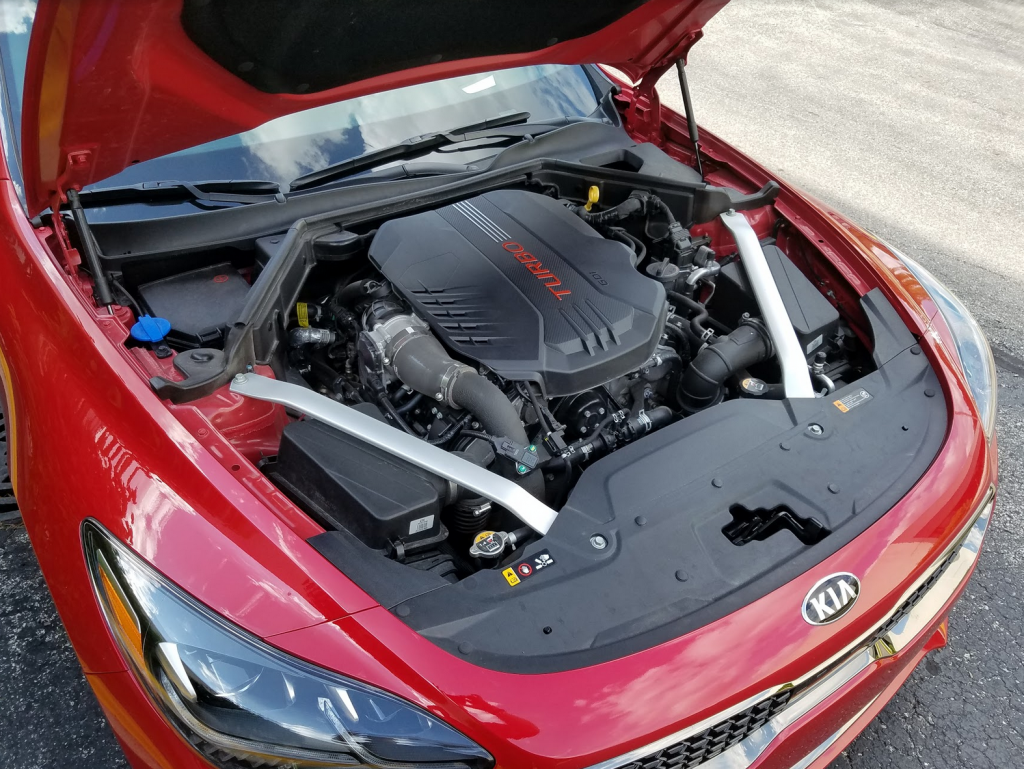 As for performance, we like the 365-horsepower Stinger V6’s snappy throttle response, with minimal lag from its twin turbochargers in full-out launches from a stop, and strong, linear acceleration. (CG tests averaged quick 0-60-mph acceleration of about 4.8 seconds.) The 8-speed automatic transmission kicks down promptly, making for great passing response. Steering and handling are sporty enough to convey the Stinger’s “serious road machine” intentions. Base ride quality is firm but not harsh. It stiffens up in “Sport” mode, and perhaps falls off at that point a little relative to other established competitors in the class. Braking is excellent.

Headroom and legroom are comfortably plentiful up front, though the seating position is somewhat low, which might matter to some drivers. A sloping roofline cuts into available rear-seat headroom, and legroom isn’t as ample—in fact adult occupancy is pretty well ruled out if the front seats are moved all the way back. The sloped rear window results in a slitlike aspect when viewed through the mirror, so the standard rearview camera and rear obstacle detection are useful when backing up.

We’re not bowled over by the personal-item storage space. Both the glovebox and console box are small. A covered bin in the forward portion of the console houses an auxiliary input, 12-volt power point, and two USB plugs. A pair of exposed cup holders in the console suggest suggest a bit of cost cutting—these are usually hidden under a door or sliding cover in premium-grade cars. Otherwise, the cabin makes generous use of plush, attractive soft-touch materials and lots of neat-looking satin-silver trim.

Easily managed controls include audio-system volume and tuning knobs and other physical buttons. The 8-inch touchscreen is easy to reach. Climate settings are via a handy rotary temperature dial, though fan-speed and mode selections are made with repetitive-step controls. We think the toggle-type gear selector will take some getting used to. The lever is pushed forward for Reverse and pulled back for Drive; a separate button engages Park. Frankly, though, the Stinger isn’t alone in its field when it comes to quirky gear controls.

As for cargo management, the hatchback design opens up a larger hold than is available in any sedan. A bonus is that the rear seat backs fold level with the cargo floor—not all sedans do this—and there’s some hidden storage under the floor. The GT2’s hatch lid is both powered and hands-free.

The Stinger is quite enjoyable to drive, and its price provides the opportunity to spread the joy to a wider audience than some of its class competitors allow. This Kia may not exactly be right to those cars’ level but it is close, and it’s still new. It has the chance to learn and grow.

The new-for-2018 Kia Stinger is an ambitious foray into a class of sports sedans traditionally dominated by European luxury brands. The Stinger handily undercuts the pricing of comparable Audis and BMWs with similar specs, but it can’t quite match those rivals for engineering and performance finesse.