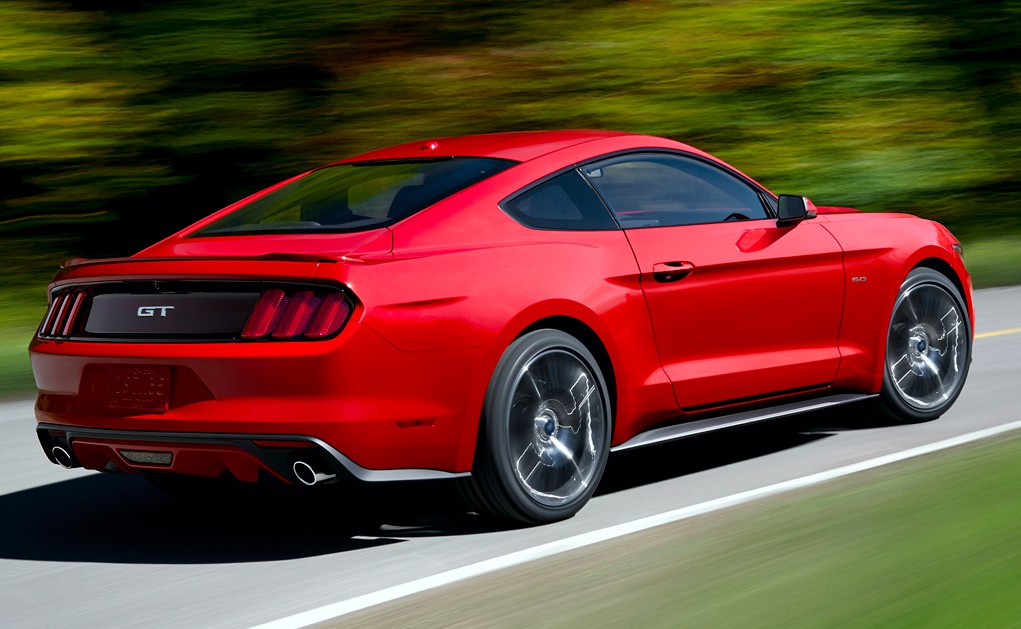 The redesigned 2015 Ford Mustang is all new outside, and boasts some news under the hood, as well.

DEARBORN, Mich., Dec. 5, 2013 – The next chapter in the life of the iconic pony car begins today as the all-new Ford Mustang – loaded with innovative technologies and delivering world-class levels of performance – is simultaneously revealed around the globe in six cities on four continents.

“Ford Mustang inspires passion like no other car,” said Raj Nair, Ford group vice president, global product development. “The visceral look, sound and performance of Mustang resonates with people, even if they’ve never driven one. Mustang is definitely more than just a car – it is the heart and soul of Ford.”

Mustang’s impact goes well beyond the 9 million-plus cars sold in its 50 years of continuous production. It has made thousands of appearances in film, television, music and video games, and is the world’s most-liked vehicle on Facebook. For the first time ever, Ford will bring Mustang to customers in key parts of Europe and Asia.

“We crafted this car with the goal of creating a contemporary interpretation of Mustang – an American automotive icon that symbolizes optimism and freedom for millions of people around the world,” said Jim Farley, executive vice president of Ford global marketing, sales and service and Lincoln.

The clean-sheet design of both Mustang fastback and convertible evokes the essential character of the brand, retaining key design elements – including the long sculpted hood and short rear deck – with contemporary execution.

“You only get one chance to make a first impression, and when you see this car you immediately see a Mustang strong and true,” said Moray Callum, Ford executive director, design, The Americas.

Mustang convertible drivers will appreciate the standard multilayer insulated cloth top that gives the car a more upscale appearance and a quieter cabin. The new top lowers twice as fast as before, and has a sleeker profile when folded for open-air motoring.

The information and controls an active driver needs are all readily accessible in the aviation-inspired cockpit, which is executed with the highest degree of craftsmanship ever found in a Mustang. Large, clear instrumentation puts vehicle information right in front of the driver in the roomier cabin, while improved ergonomics and tactile switches and knobs provide better control. The added width and a new rear suspension contribute to improved shoulder and hip room for passengers, and a more usefully shaped trunk can accommodate two golf bags.

The way Mustang looks, drives and sounds is key to the visceral experience that makes drivers just want to get in and hit the road. With more options to choose from, there is a Mustang to fit any lifestyle. The upgraded V6 and V8 are joined by an all-new 2.3-liter EcoBoost® engine that brings state-of-the-art technology to Mustang.

“This EcoBoost engine delivers where a Mustang driver expects it to, with a broad, flat torque curve that pours out when you stand on it for easy passing or hustling down a twisty road,” said Dave Pericak, Ford Mustang chief engineer.

The Mustang EcoBoost engine uses direct injection, variable cam timing and turbocharging to deliver plenty of usable performance and projected segment-leading fuel efficiency. A unique intake manifold and turbocharger housing enable it to deliver the performance Mustang drivers expect with output projected at more than 305 horsepower and 300 lb.-ft. of torque.

With at least 300 horsepower and 270 lb.-ft. of torque on tap from the standard 3.7-liter V6, even the most accessible Mustang delivers the performance customers expect.

Drivers will appreciate smoother shifts from the updated manual gearbox, while a reworked automatic transmission features new steering wheel-mounted shift paddles for drivers who want the choice between convenience and control.

Most nimble pony ever

“We already set a very high standard for Mustang’s dynamics with Boss 302, and our goal was to go above and beyond that with this new car,” said Pericak.

The new double-ball-joint front MacPherson strut system also enables the use of larger, more powerful brakes. This is expected to be the best stopping Mustang yet, with three available brake packages.

At the rear is an all-new integral-link independent rear suspension. The geometry, springs, dampers and bushings all have been specifically modified and tuned for this high-performance application. New aluminum rear knuckles help reduce unsprung mass for improved ride and handling.

Smarter than your average pony

The all-new Mustang features a significant amount of innovative technologies providing drivers with enhanced information, control and connectivity when they want it. From Intelligent Access with push-button start to SYNC® and MyKey® in every Mustang built, plus available Track Apps, MyColor gauges and new Shaker Pro audio system, drivers will be able to customize their time behind the wheel.

The feeling of freedom and confidence Mustang instills in its drivers is amplified when they can take control of how the car behaves. On a twisty back road or a weekend track day, the driver can tap the toggle switches on the console to quickly adjust steering effort, engine response, and transmission and electronic stability control settings using the available Selectable Drive Modes to create the perfect Mustang at any time.

The advanced new Ford-developed stability control system is tuned to maximize Mustang’s dynamic capabilities. When the time comes to turn up the wick at the track, Mustang GT includes standard launch control that enables drivers to achieve smooth, consistent starts every time.

When it’s time to back off and relax for the drive home, available advanced driver-assist features including Blind Spot Information System with cross-traffic alert and adaptive cruise control can help ease the load, while SYNC AppLink™ lets drivers control their smartphone apps to listen to their favorite form of entertainment.

April 17, 2014, marks the 50th anniversary of the introduction of the original Ford Mustang and each 2015 model celebrates the milestone with a badge on the instrument panel that includes the galloping pony logo and the words “Mustang – Since 1964.” Mustang will continue to be built in the United States at Flat Rock Assembly Plant.

“From day one, we knew if we were going to build a new Mustang, we had to do it right,” said Pericak. “We built a new Mustang from the ground up that is quicker, better-looking, more refined and more efficient, without losing any of the raw appeal that people have associated with Mustang for half a century.” 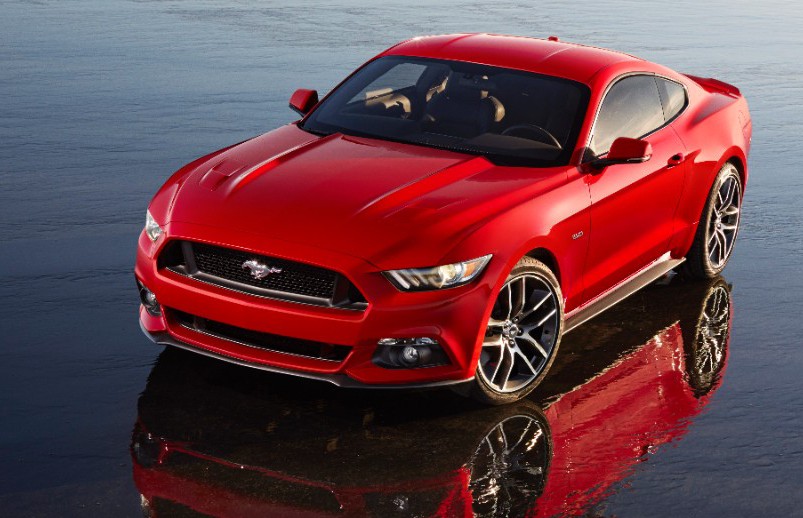 Still very recognizably a Mustang, Ford designers have given the long-running ponycar a number of design cues that are common across the Ford lineup. 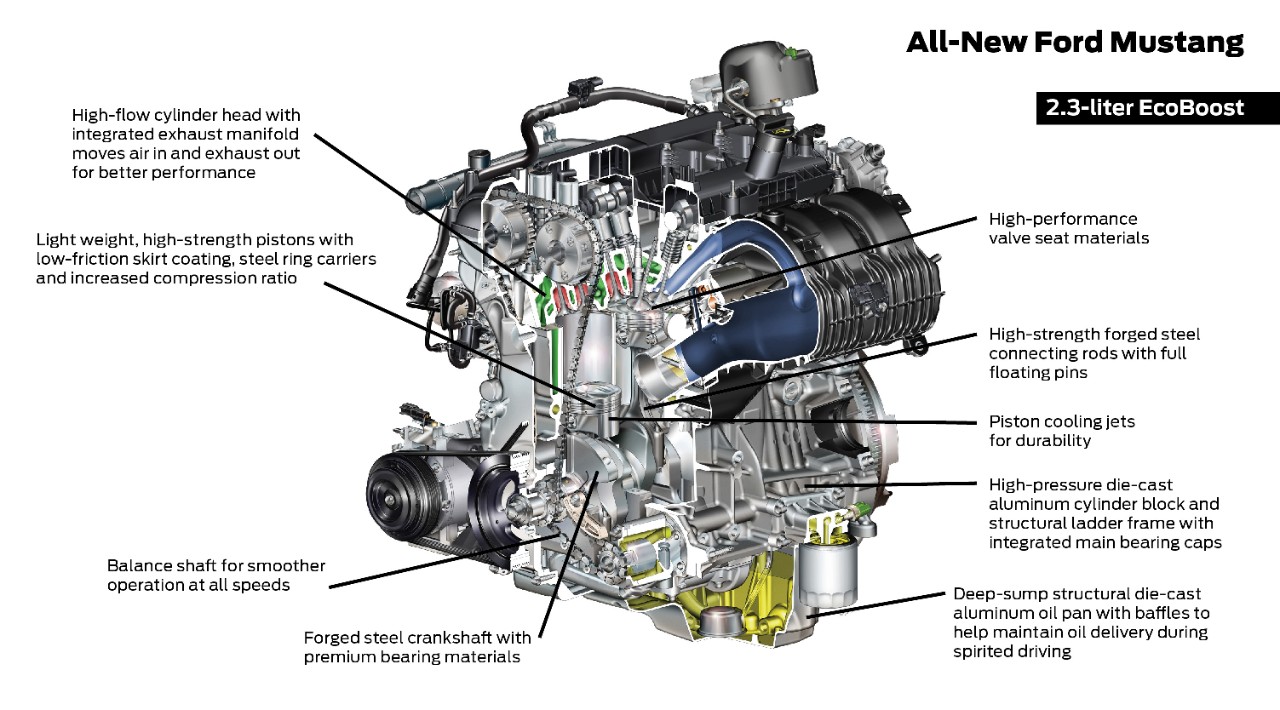 A new EcoBoost 2.3-liter engine promises to be the fuel miser of the available Mustang engines. At 305 horsepower, it should be rewarding to drive, as well.

To read ‘Mustang II: The Right Car at the Right Time?’ click here.