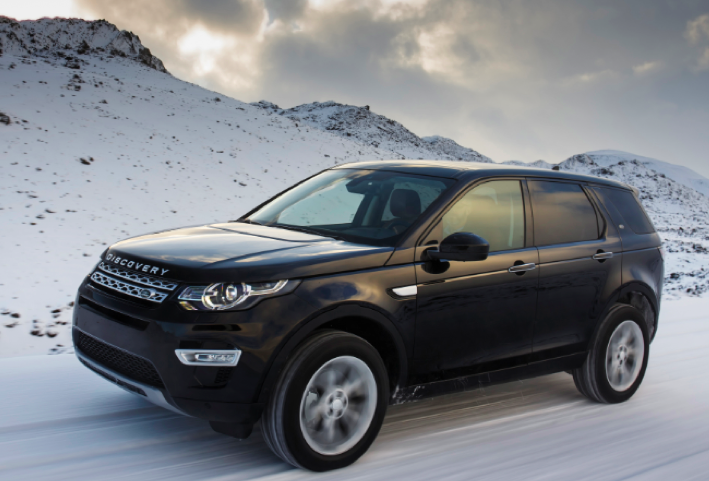 All new for 2015, the Discovery Sport will replace the LR2 in Land Rover showrooms.

This wasn’t your ordinary press preview.

First, the global launch of Land Rover’s new entry-level vehicle took place in Iceland… in January. And as one might expect of a country bordering the Arctic Circle in the middle of winter, it wasn’t exactly balmy there.

Secondly, the route included miles of snow-covered off-road trails, so all the test vehicles were fitted with studded winter tires—which made a heck of a racket on the dry sections of pavement. And there really weren’t any twisties (at least that weren’t glacially slick) to evaluate handling, 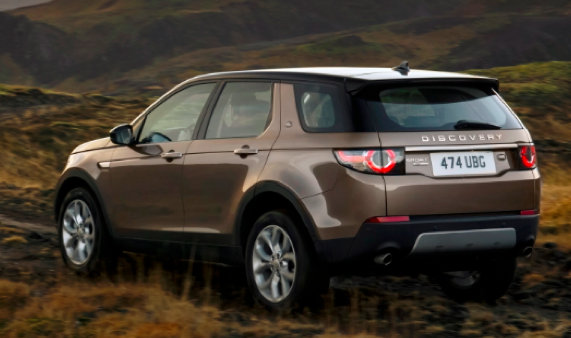 Discovery Sport is the rare premium-compact SUV that offers a 3rd-row seat for 7-passenger capacity.

But Land Rover says it’s stressing capability and versatility with the Discovery Sport, and this was as good a place as any to demonstrate those qualities.

When it goes on sale this spring, the Discovery Sport will replace the compact LR2 in Land Rover’s lineup, a naming move that will help align the company’s U.S. products with those sold in the rest of the world. Down the road, the existing midsize LR4 will become the Discovery, which will complete the transition. (In Land Rover speak, adding “Sport” to the name indicates a smaller vehicle in the same family, just as the current Range Rover Sport is a smaller version of the top-line Range Rover.)

For those who don’t know (which, prior to this trip, would have included me), Iceland doesn’t really live up to its name. Thanks to the route of the Jet Stream, its climate is actually quite temperate considering that its far-northern lattitude is about the same as that of central Alaska. In fact, there wasn’t that much snow on the ground in some places, though many of the trails we traveled were covered with ice. 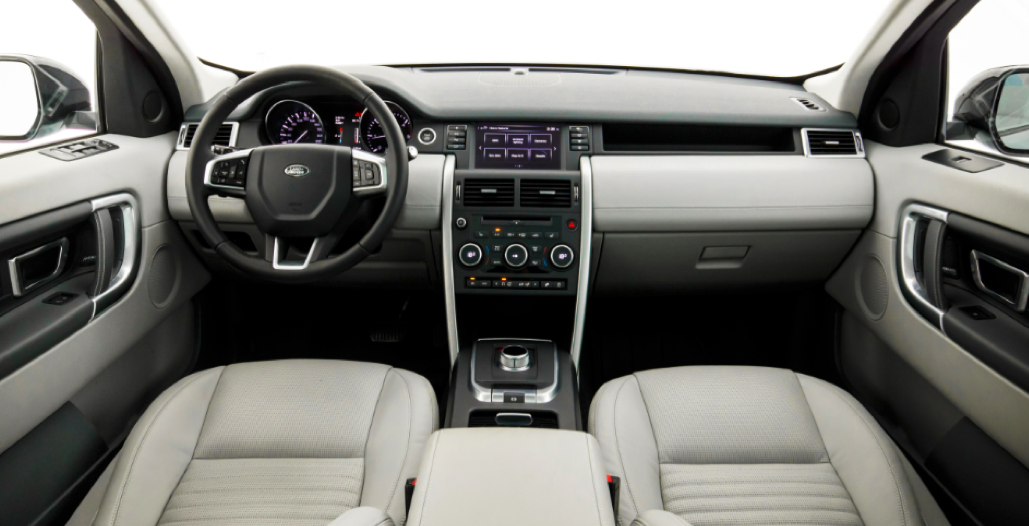 A couple of other points about Iceland. The entire country—which is roughly the size and shape of Ohio—is inhabited by only about 350,000 people, roughly 1/10th the population of my home city of Chicago. The vast majority of those folks live in or around Reykjavik, the capital (and only major) city, which is situated on the central west coast of the country.

“Reykjavik” might sound familiar. In 2010, a volcano erupted nearby (actually, it was—quite fortunately—a fair ways further inland), and the plume it generated halted air traffic throughout Europe for about two weeks. Turns out, eruptions are not all that rare there. Roughly 30 percent of the country is covered with lava, which makes for some interesting topography. Just outside Reykjavik, the ground becomes very lumpy, with tufts of tall grass or moss covering what look like closely spaced boulders. Because lava is quite hard and thus difficult to flatten or dig through, most of this land is unusable, though some roads have been carved through. 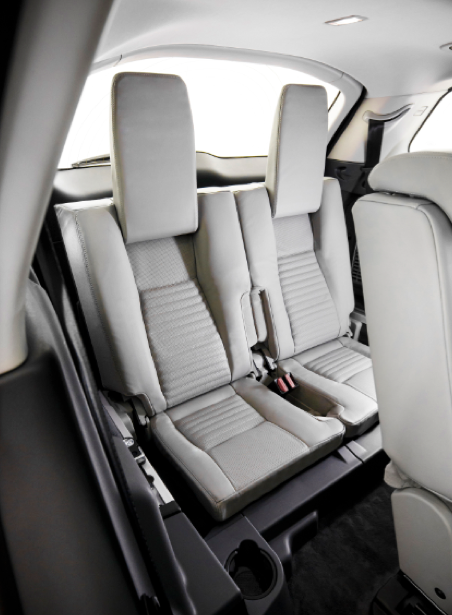 It’s meant primarily for kids, but the optional 3rd row is surprisingly easy to access, and can accommodate average-size adults—though they won’t be comfortable for long.

Past that area, the ground is mostly rolling hills and mountains, and that’s where much of our driving took place. In these sparsely populated areas, there didn’t seem to be many paved roads, most of the thoroughfares being covered with gravel or dirt—and at this time of year, snow and ice.

As mentioned, our test vehicles where shod with studded tires, but as it turns out, so were most other vehicles on the road (Icelanders apparently taking winter driving very seriously). Walking around town near the hotel one night, all the passing cars sounded as though they were driving on gravel.

Out in the wilderness, we pretty much had the roads to ourselves—a good thing, since they were both narrow and very slick. There would be nothing for miles and miles around—no towns, no sign of life—and then you’d see a farm or a small clump of houses, and you’d wonder, “What in the world do these people do if they run out of ketchup?”

These trails were a test of both man and machine, and the machines, at least, came through with flying colors. What was perhaps most telling was that our Discovery Sport soaked up some pretty rough terrain with little fanfare, a testament to its suspension compliance. At one point, a rather serious stream crossed our path—no doubt not an accident—and had Land Rover’s off-road experts not been there to wave me across, I would have turned around and gone back. It wasn’t until later that we learned the Discovery Sport can ford water nearly two feet deep (!), a useful tidbit of information that would have eased the anxiety as I cringed and then gingerly crawled my way down the embankment. (It’s times like these that newspaper headlines such as “Idiot Journalist Rescued from Raging River” flash through my head.) Furthermore, the Discovery Sport has impressive ground clearance and approach/departure angles, and offers numerous features aimed at off roading such as hill-descent control and “customizable” 4WD settings. 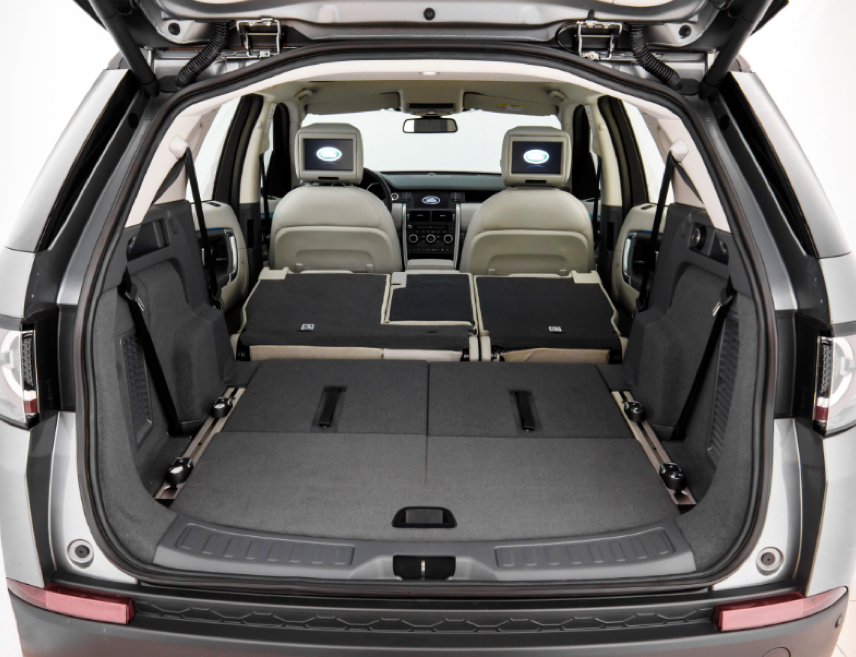 The 2nd-row seats fold nearly flat and level with the cargo floor to create a sizeable storage space.

And then there’s the “versatility” part of the equation.

The Discovery is the only premium compact SUV I can think of that offers a 3rd-row seat; Land Rover says it should be about a $2000 option. And though the company promotes this setup as a “5+2” configuration—the “+2” implying it’s mostly for kids—I managed to finagle my 5’9 frame back there without too much trouble, and I fit … though my knees-up posture wouldn’t have kept me a happy camper for long. The 2nd row slides fore and aft more than 6 inches, which results in either ample legroom, or—if the seat is moved forward to give the 3rd-row folks room—still adequate adult legroom (a 6-foot cohort sat comfortably in front of me). Note that while there’s normally decent cargo space behind the 2nd-row seat, there’s barely enough room for a few grocery bags behind a deployed 3rd-row seat. Also, since the 3rd-row seat folds into the underfloor depression that otherwise holds the spare tire, those with a 3rd row carry their spare underneath the vehicle. 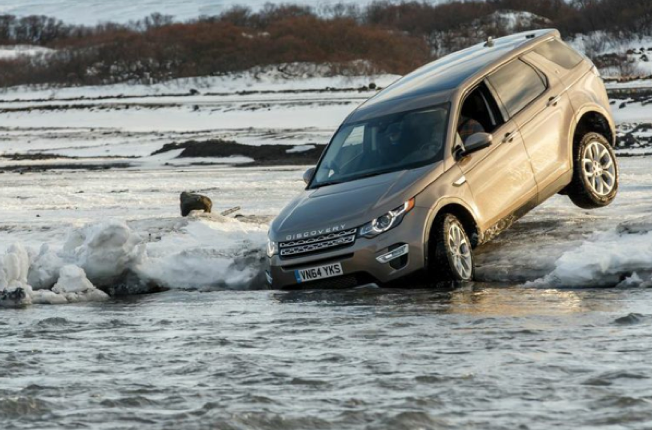 Our excursion included some real “off road” experiences.

When the 2nd-row seat is folded for maximum cargo-carrying capability, it lies roughly flush with the rear cargo floor but not flat. There’s a small amount of underfloor storage around the spare tire on 2-row vehicles, but it’s far forward and thus a stretch to reach. Cabin storage consists of a large glovebox, a dashface tray, a decent-size console box, two covered cupholders with a USB port, a forward console tray, and map pockets in the doors—so quite a bit of handy space to stash stuff.

Interior design and materials are stately rather than flashy. Our test vehicle was mostly black inside with some slashes of silver trim (livelier two-tone combinations are available), and most “touch” surfaces were padded. Controls are not only easy to reach but also easier than many found in the premium class to decipher, with a combination of honest-to-goodness buttons and knobs supplementing an 8-inch touchscreen for infotainment adjustments. Visibility is decent to the front and sides. But though the rear roof pillars are surprisingly thin, the view back and to the rear corners is blocked by the 2nd-row headrests—a problem that can be alleviated by either removing the headrests or folding down the seat back. 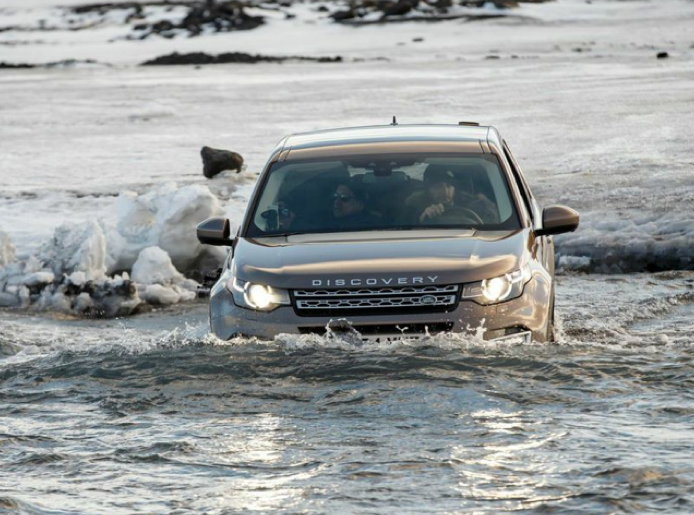 Land Rover says the Discovery Sport can wade through water up to 23.6 inches deep—and proved it.

Powering the Discovery Sport is the same 240-horsepower 2.0-liter turbocharged 4-cylinder engine currently found in the company’s LR2 and Evoque, mated to a 9-speed automatic transmission. If there’s a fly in the Discovery Sport ointment, it’s in this powertrain. Though never lacking for oomph (Land Rover claims a brisk 7.8-second 0-60 time), accessing it isn’t always instantaneous. In normal driving, it’s fine. But floor the throttle from a stop, and the Discovery Sport “moves out” rather than “jumps” for about 20 feet before real power comes on, and when it does, progress—while quick enough—isn’t always linear. It’s only fair to note, however, that this is the usual reaction from small, turbocharged engines. Less acceptable is that hitting the gas from speed results in far longer-than-normal delays before the transmission downshifts and the vehicle begins to accelerate. As these were pre-production units, it’s possible this is a programming issue that might be rectified before the “real” ones go on sale, so we’re eager to try one on our own turf when Discovery Sports hit the open market.

In a segment that has seen explosive growth of late, Land Rover’s current LR2 has been largely ignored. But based on our preview drives, the Discovery Sport shouldn’t be. Its expected starting price of about $38,000 including destination includes a host of equipment, and the fact that a 3rd-row seat is offered sets it apart from the premium-compact crowd. But even without that, if off-road capability and a comfortable, refined driving environment are of importance to you, a stop at your Land Rover dealer would certainly be time well spent.

How Turbocharging Works: Stuffing a Quart into a Pint Pot