It’s going to be hugely confusing some years down the road, because there are now two completely different versions of the 2016 Chevrolet Cruze.

Last fall, Chevrolet introduced the 2016 edition of the Cruze as the “Cruze Limited.” What we now know is that the name modification was an attempt to differentiate it from the upcoming redesigned Cruze, which recently debuted as a “late” 2016 model. 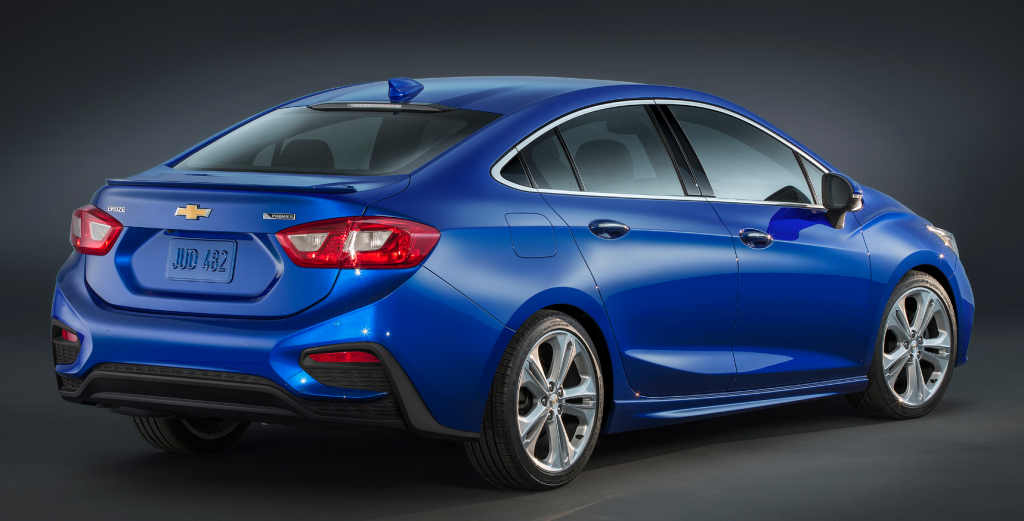 Lower-line Cruze models with automatic get an EPA mpg estimate of 30 city/42 highway — numbers that used to be found only on diesels.

Compared to the car it replaces, the redesigned Cruze is nearly three inches longer overall on a half-inch-longer wheelbase. Yet despite its larger size, Chevrolet says it weighs about 250 lbs. less than its predecessor. It’s offered in traditional L, LS, and LT trim levels, with the previous line-topping LTZ being replaced by the Premium.

Also different is the powertrain – or at least, the engine part of it. The 2016 Cruze Limited carried either a 1.8-liter four or a 1.4-liter turbocharged four; both were rated at 138 horsepower, but the turbo generated more torque. (Note that the previously available 2.0-liter turbodiesel engine was dropped for 2016.) By contrast, the “new” Cruze comes only with a highly modified 1.4-liter turbo putting out 153 horsepower. As before, it can be mated to either a 6-speed manual transmission or 6-speed automatic. The combination of the revised engine, lighter weight, an engine start/stop system, and improved aerodynamics result in significantly better fuel economy, with city/highway ratings for the turbo engine and automatic transmission combo in most models rising by 4 mpg to 30/42 – figures Chevrolet claims tops the segment, at least for standard configurations. (Note that manual-transmission models are rated at “only” 29/41, with the top-line Premier at 30/40.) 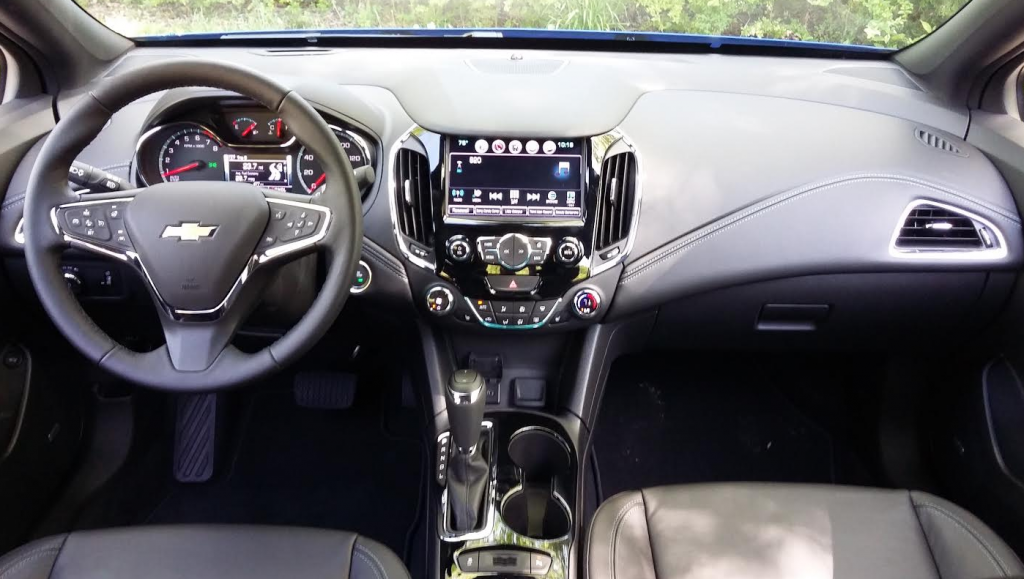 Gauges and controls are easy to use and decipher. There are few padded surfaces, but nothing comes off as looking “cheap.”

Styling is similar in character but entirely different in detail. The silhouette is “swoopier” than before, with thin-looking rear roof pillars. Bowed front-fender arches lead to an upswept sculpture line that runs to the taillights, with a lower cove running between the wheelwells. The upper and lower grilles mimic those of other Chevrolet models, and the headlight housings are traced with LED running lights.

With the new styling and engine come a host of new infotainment, safety, and comfort & convenience features.

Along with these additions, Cruze can now be equipped with OnStar 4G LTE WiFi, Apple CarPlay and Android Auto (providing navigation, hands-free text messaging, and app capability from a connected cell phone, among other things), satellite radio, and wireless cell-phone charging. 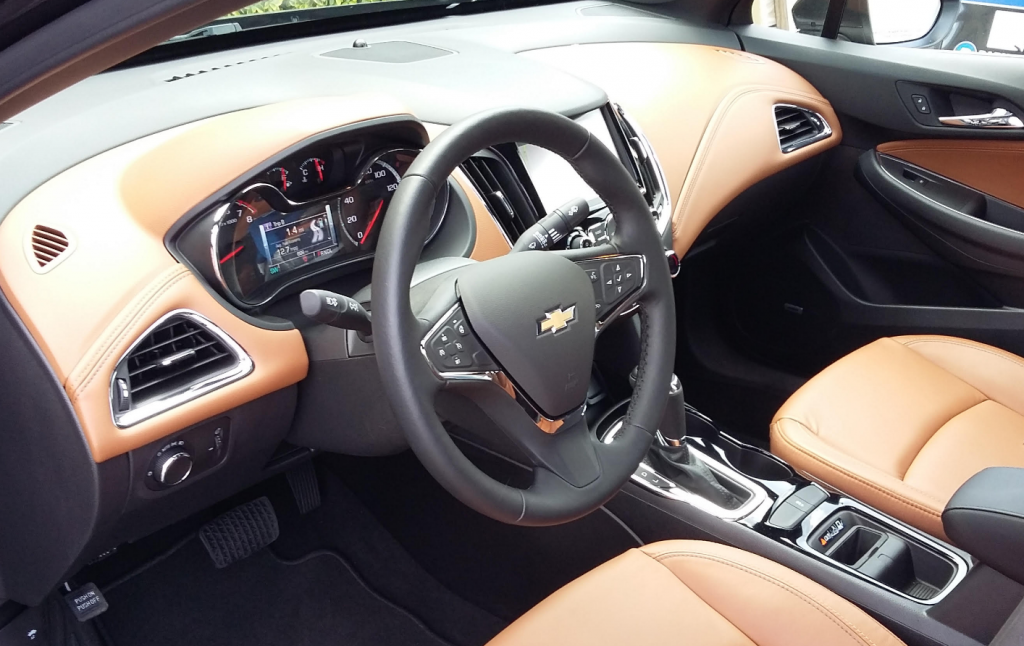 Step inside the Cruze, and you’ll find a dashboard layout that is likewise similar to that of other new Chevrolet models. Twin round, analog gauges are separated by a small info screen, all contained in a barbell-shaped chrome surround. The audio system carries volume and tuning knobs supplemented by a few physical buttons, with virtual buttons on the touchscreen (7-inch is standard, 8-inch optional) controlling band and station selection. Climate controls are a mix of handy rotary knobs for temperature and fan speed, with individual pushbuttons for mode – a very simple-to-use arrangement.

Although most surfaces inside look to be padded – including the dashtop and door tops – they’re really just covered in “soft paint,” and even the door armrests have but very thin padding. There’s a swatch of padded material across the dash in front of the passenger, but that and the center-console armrest are about the only soft surfaces. Trim is offered in piano black or a goldish grey with some chrome accents. Overall, it has a pleasing look, and two-tone color combinations are available to spice things up a bit. 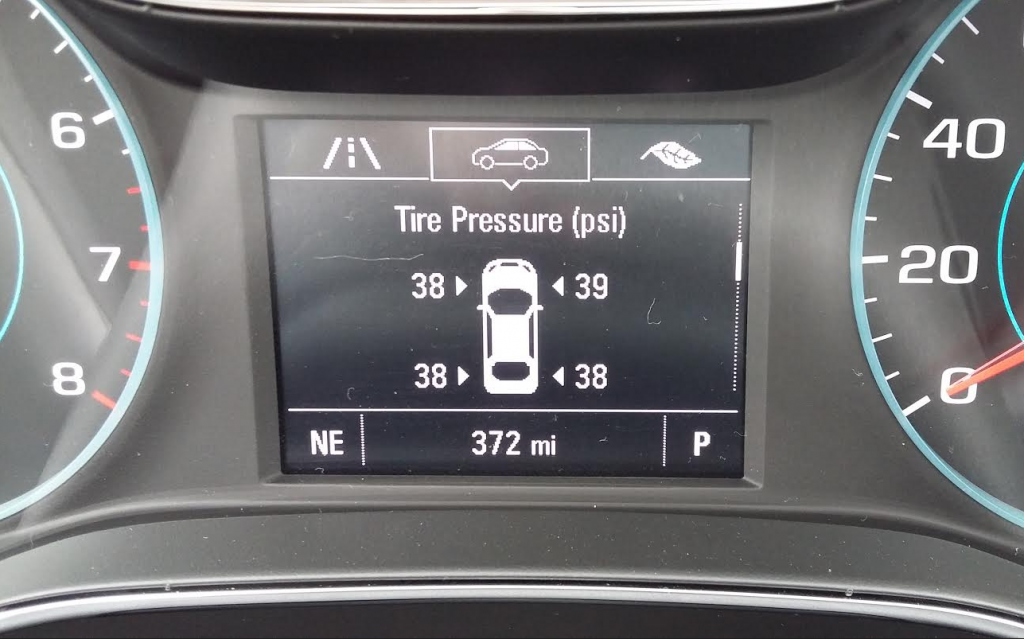 A nice — and upscale — feature is the individual tire-pressure readout.

While there are a fair number of interior storage compartments, none are very large. The glovebox and console box are both rather small, but they’re augmented by two small console trays, two cupholders, a good-size forward console bin with Aux/USB/12-volt plugs, and small map pockets in the doors.

There’s very good front-seat headroom, and the seat goes far enough back to accommodate even very tall drivers – though in that position, it can be tough to get through the door opening. The Premium trim level tested had a power driver seat with a tilt cushion, a nice comfort touch. In back, headroom is adequate for those up to about 6 feet tall. Legroom is fine behind a normal-size front passenger, but it virtually disappears if the front seat is set all the way back (though as mentioned, it goes really far back). Egress is easy through fairly large doors. Our Premium was equipped with heated rear seats and a 110-volt outlet, both rare features for the class.

Visibility is OK to the front thanks to relatively thin roof pillars. But it’s only fair to the sides and rear, the last being a bit of a surprise, as the pillars look a lot thinner from the outside than they do from the inside.

The trunk has a good-size opening and is wide at the rear. However, the sickle-shaped trunklid hinges dip into the cargo area, and they’re not covered, so you have to be careful when placing large items back there. The rear seat backs fold, but they rest about 4 inches above the level of the trunk floor, so you can’t just slide long items all the way forward; you have to lift them halfway in to clear the hump.

A hatchback version of the Cruze is due this fall as a 2017 model.

The combination of more power and less weight result in better acceleration; Chevrolet claims about 7.7 seconds from 0-60 mph. However, it didn’t feel that quick during our drives, which admittedly had more than just the driver (and thus more weight) aboard. Nail the gas from a stop, and the Cruze labors off the line for the first 20 feet or so until turbo boost builds, at which point it picks up speed more quickly. Do the same from a roll, and the transmission usually kicks down fairly quickly to a lower gear for more power, though we noticed some hesitation at certain speeds.

Our test Premier rode on 18-inch wheels with low-profile tires (others use 15-, 16-, or 17-inchers, depending on model), which would normally make for a rather stiff ride. And though our Nashville preview route didn’t contain the kind of potholed surfaces that surround our Chicagoland headquarters, the ride felt quite composed and quiet, with little bump noise. Handling likewise impressed, and there wasn’t any undue wind or road noise at highway speeds.

Although the “old” Cruze was a good car and a decent seller for Chevrolet, it’s clear the new version boasts a number of improvements that give the company an even stronger entry in the highly competitive – and highly popular – compact segment. That will also be true a few years from now, when early and late 2016 models will be sold side-by-side in the used-car ads. However, the redesigned 2016 Cruze will have a very short year, as the 2017 models will likely begin production in mid summer. At that point, the current 4-door sedan will be joined by a 4-door hatchback, with a diesel-engine option reappearing a few months later. That all means that the compact segment is about to heat up, as Chevrolet is obviously focusing on small cars in a big way.

(Hint: There is no wrong answer.)

Pop Quiz! Which is the 2016 Chevrolet Cruze?