New to the redesigned 2016 Toyota Prius lineup is the Two Eco, which gets even better fuel economy than its already-thrifty siblings. Prius prices should start at about $25,000 when it goes on sale in January.

When many folks think “hybrid,” what pops to mind is Toyota’s Prius. While it wasn’t the first of the modern gas/electric combinations, it certainly has been the most popular, frequently selling more than all other hybrids combined.

Debuting for the 2001 model year, the Prius has been through three design generations, and it enters its fourth for 2016. The redesign maintains the car’s familiar shape (the preferences of the wind being unchanged), but the car gets revised styling that sets it apart from its predecessor – and virtually any other car on the road – along with a host of new features along with even better fuel economy.

Although the wheelbase (distance between front and rear wheels) remains the same, Prius grows by about 2 inches in overall length. That and a few other changes results in nearly 15 percent more cargo volume, but oddly, rear-seat legroom diminishes by 2.5 inches. However, there’s still enough knee space in back for an average-size adult to sit behind a lanky front seater who maxes out the seat travel, and rear headroom should be sufficient for those up to about 5’11. Large door openings make it easy to get in and out, both front and rear. 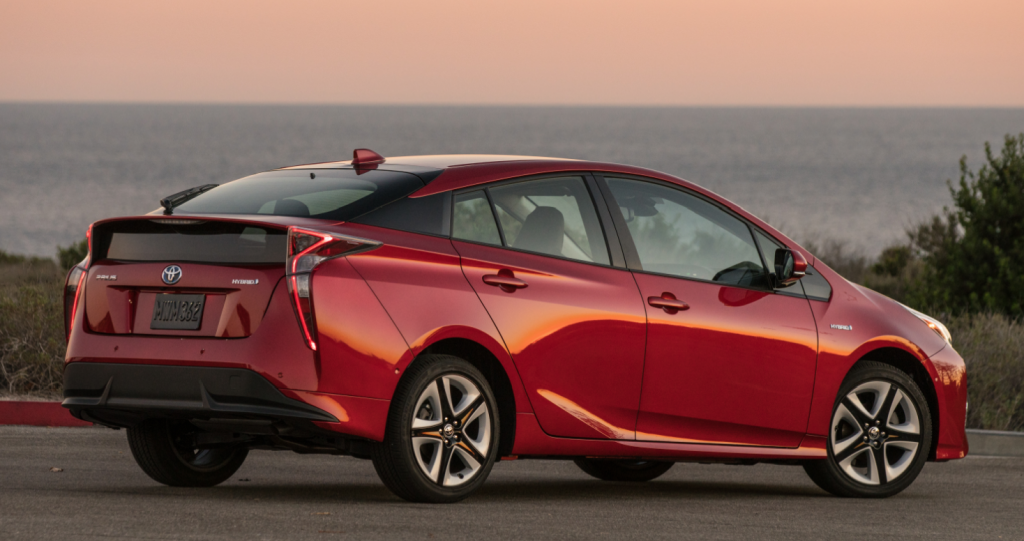 The new Prius is longer, lower, and wider than the previous generation with a significantly lower beltline, all aimed at a sportier appearance. Shown is the top-line Four Touring, which has 17-inch wheels in place of the standard 15s.

One of the goals of the new Prius was to make it a bit sportier, and to that end, the car is about an inch lower and nearly an inch wider. More significantly, the seating position and cowl height are nearly 2.5 inches lower. Toyota also says the suspension has been modified to improve handling and steering response, but without driving a ’15 and ’16 back-to-back, we could only say that the new car feels nimble enough, though the light steering has all the feel of a video-game controller.

The engine didn’t change much, but fuel economy did. That’s partly due to an even lower coefficient of drag (resistance to running through the air) that Toyota claims makes Prius the slipperiest mass-produced car in the world. EPA ratings rise from 51 city/48 highway to 54/50, and a new Eco version of the Prius takes them even higher, to 58/53.

Prius will come in six trim levels for 2016. The base model remains the Two, which is joined this year by the aforementioned Two Eco. These models come fairly well equipped, with Entune audio system with voice recognition, Bluetooth wireless cell-phone link, and Siri Eyes Free with text messaging, along with newly added LED headlights and a 4.2-inch color instrument-cluster display. However, these base models lose the previously standard cargo-area cover, and the Eco also omits a rear-window wiper (presumably in the name of better aerodynamics).

Added on the Three are a premium Entune audio system with navigation app, Qi-compatible wireless charging, soft-touch trim on the upper door panels, white accents on the shifter and center console, and the ability to add several options. These include a power moonroof, head-up display, and – most importantly – Toyota Safety Sense, a package of high-tech features that includes forward collision warning and mitigation with pedestrian detection, lane-departure warning with lane-keep assist, automatic high beams, and adaptive cruise control.

Topping the lineup is the Four Touring, which adds back the 17-inch wheels and makes Toyota Safety Sense standard. 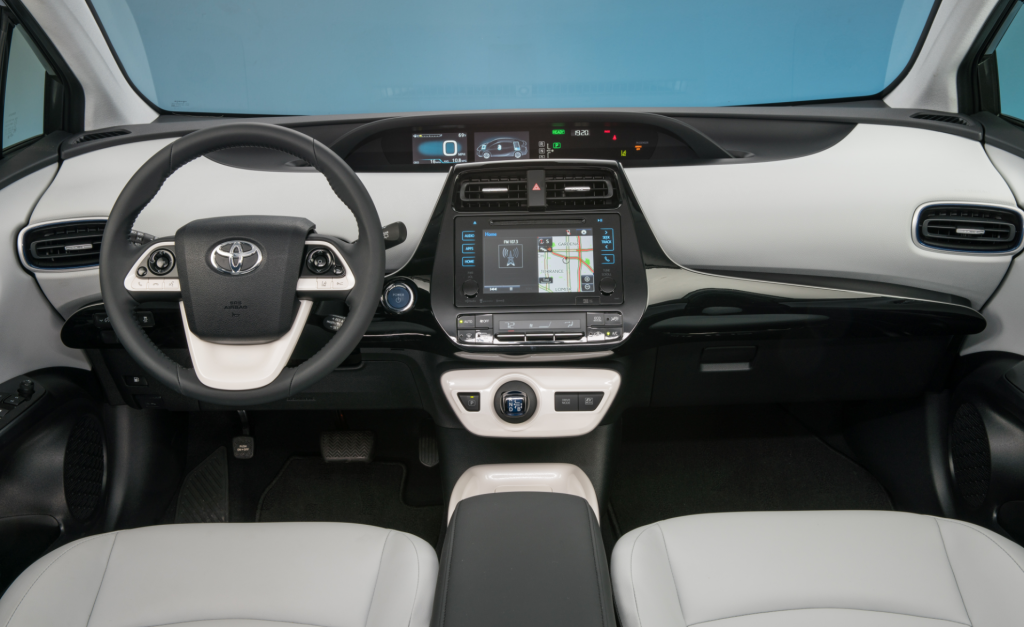 In all black, interiors look a bit plain, but available two-toning really brightens things up. Gauges remain at the center top of the dashboard (rather than in front of the driver), and audio and climate controls are easy to reach.

Inside, the Three and up trim levels are a little dressier thanks to their added soft-touch surfaces and white trim panels, and two-tone options brighten what is otherwise a rather somber look. Visibility is good to the front and sides, fair to the rear corners, but the horizontal divider through the rear window can block the view straight back.

Audio and climate controls are mounted high, within easy reach. There are volume and tuning knobs for the radio, with other functions integrated into the touchscreen, and it includes a CD player (many cars now don’t). Climate controls all consist of repetitive-step pushbuttons or flippers that can be tedious to adjust.

Interior storage is quite good. While the glovebox is rather small, it’s augmented by a large forward console bin, two cupholders ahead of Aux/USB/12-volt plugs, a deep 2-tier console box, and small map pockets in the doors. In back, the cargo area under the hatchback is wide at the rear and far more spacious than in a sedan, but folding the rear seat backs leaves a 3-inch step that can make sliding long items forward more difficult.

Models with 15-inch wheels seemed to ride more smoothly and quietly than those with 17s, but the latter provided a bit sharper steering response. Hit the gas from a stop, and the Prius gets a good jump off the line; hit it from a roll, and response is both quick and fairly strong. Toyota claims the Prius can get from 0-60 mph in about 9.8 seconds, which is a bit slower than most gas-powered competitors, but plenty quick enough for everyday driving. 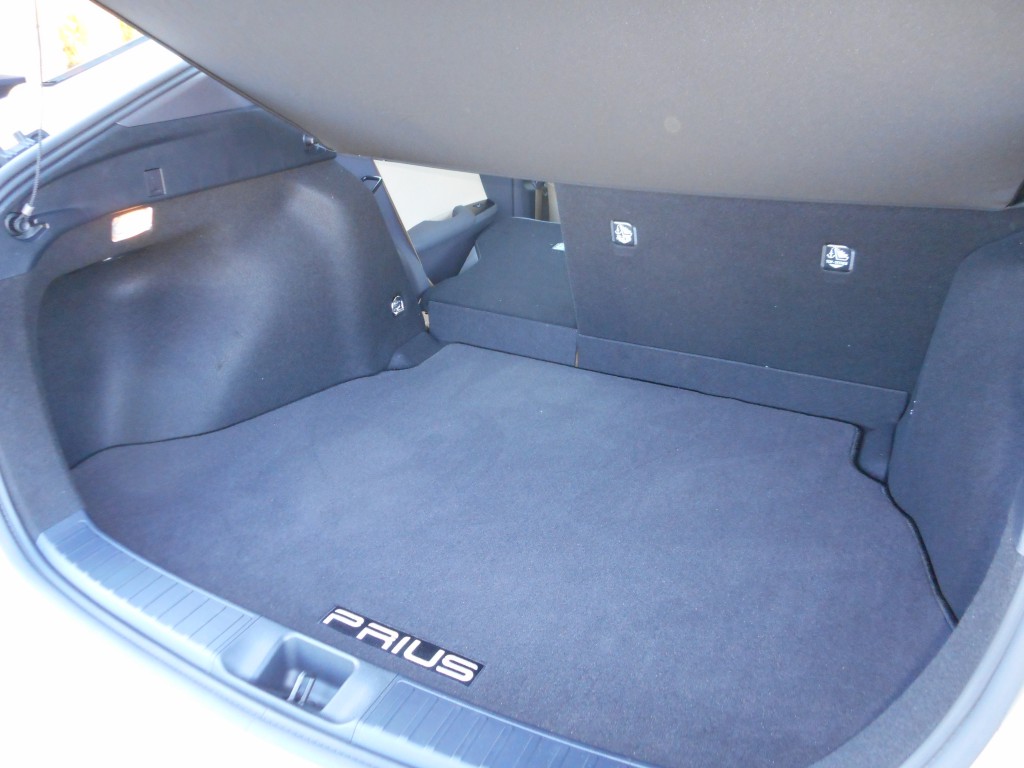 As a hatchback, the Prius offers far more load space and a larger cargo opening than most sedans. However, folding the rear seat backs to expand the area results in a 3-inch step that impedes loading of long items.

When it goes on sale in January, the Prius Two should start at about $25,000 including destination, with the even thriftier Eco version priced about $500 more. At the opposite end of the spectrum, the Four Touring is expected to come in at about $31,000, maxing out at just under $33,000 with all options.

In the current age of $2 gas, hybrids are a hard sell. But the Prius has always struck us as a really good compact car that just happens to get 50 mpg, and the new one is no different. It has adequate room for four adults, more cargo versatility than most competitors thanks to its hatchback bodystyle and clever packaging, and surprisingly good on-road behavior. And it now adds a full complement of modern high-tech safety and infotainment features (an area in which it’s been behind the curve in recent years) that makes it an even stronger proposition.