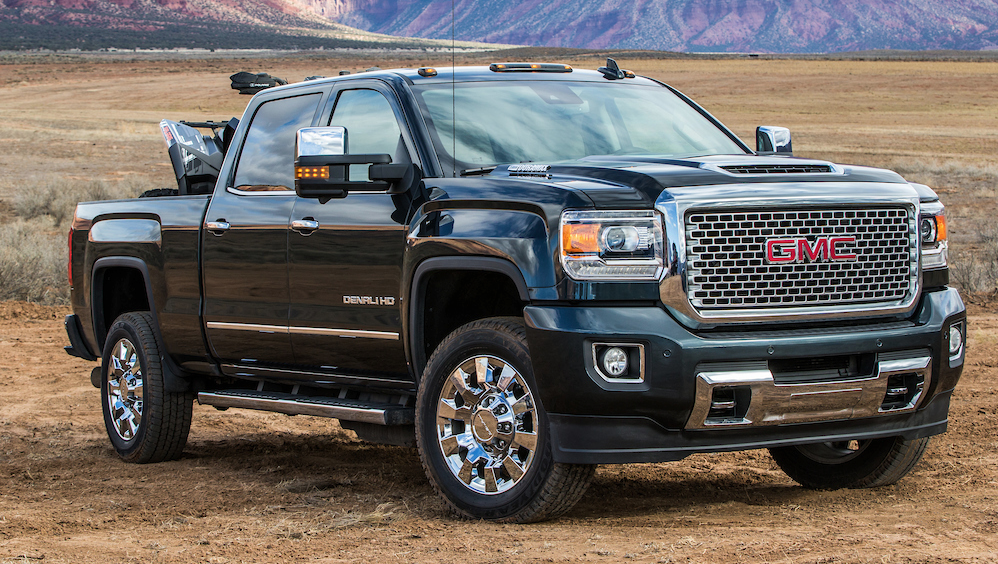 If you’re looking for obvious visual differences that separate the 2017 GMC Sierra HD Duramax from its 2016 predecessor, there is one main tip-off: a new hood scoop. That might not sound like much, but that scoop sits atop the ’17 Sierra HD’s biggest news: a revamped 6.6-liter Duramax V-8 diesel engine that cranks out class-leading horsepower.

The new-for-2017 Duramax (dubbed L5P in GM’s engine-coding system) is rated at 445 horsepower and a whopping 910 lb.-ft of torque–increases of 12 percent and 19 percent, respectively, over the previous Duramax 6.6. Ninety percent of that torque arrives at a usefully low 1550 rpm, and remains up to 2850 rpm. 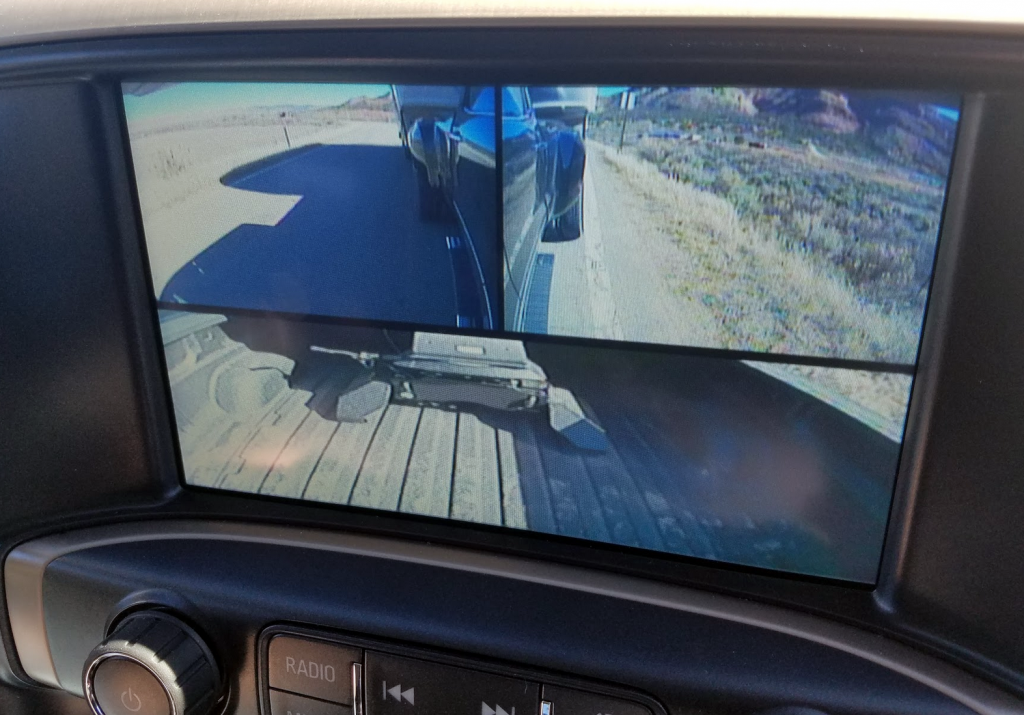 The Sierra HD offers a handy trailering camera system that can display a split-screen view of  the pickup bed area and the left and ride sides of the truck.

And, that previously mentioned hood scoop is for more than just looks. It’s a fully functional, patent-pending design that funnels cool air to the engine for better performance in heavy load, high-engine/transmission-temperature driving conditions. The “patent-pending” part is a clever arrangement of underhood ducting designed to keep water droplets and other unwanted matter from entering the engine intake.

The Duramax’s lone transmission is again the Allison 1000 6-speed automatic, but it’s been upgraded with a new torque converter and other updates to handle the engine’s higher output. Likewise, driveline upgrades such as a stronger front prop shaft and bigger U-joints were added, and the diesel emission fluid (DEF) tank’s capacity has been increased.

We drove the new Sierra HD Duramax on a press event that took us from the snowy, high-altitude conditions of Telluride, Colorado, to the desert-like climate of Paradox, Colorado—80 miles to the west and slightly north, near the Colorado/Utah border. There are plenty of steep grades, winding mountain roads, and high-elevation climbs in that neck of the woods, and the Duramax handled them all without breaking a sweat—even when loaded down with some heavy cargo. 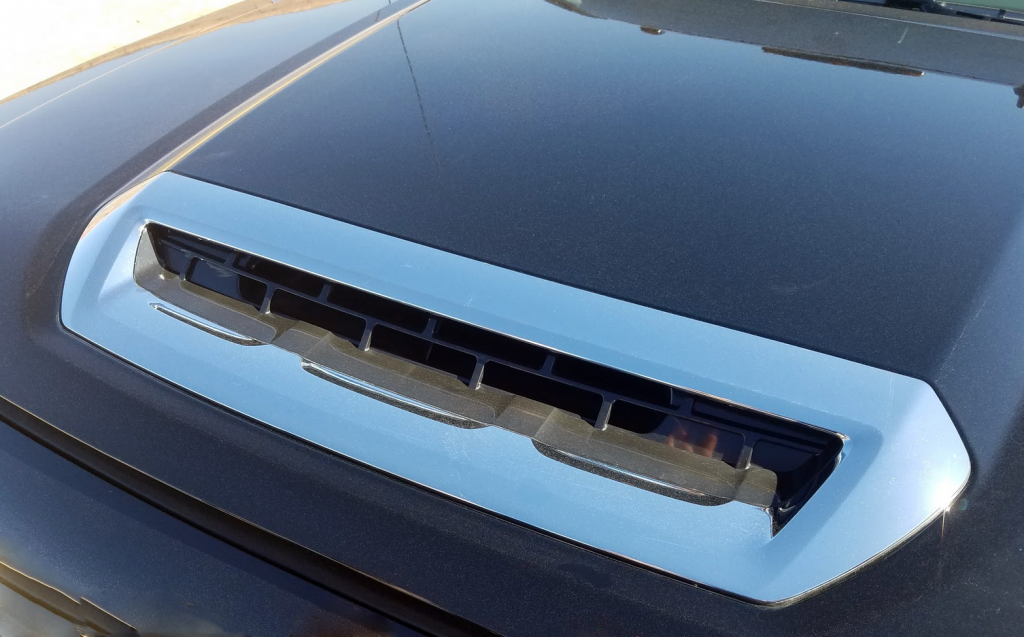 New for 2017 Duramax models is a hood scoop that routes cool air to the engine.

During our test drives, we noticed some diesel clatter at idle and a pronounced, muscular growl in fast acceleration, but the Sierra HD Denali’s cabin was impressively quiet overall. Ride quality is quite good for a large pickup, though there is some telltale body-on-frame shudder over some bumps and pavement imperfections. 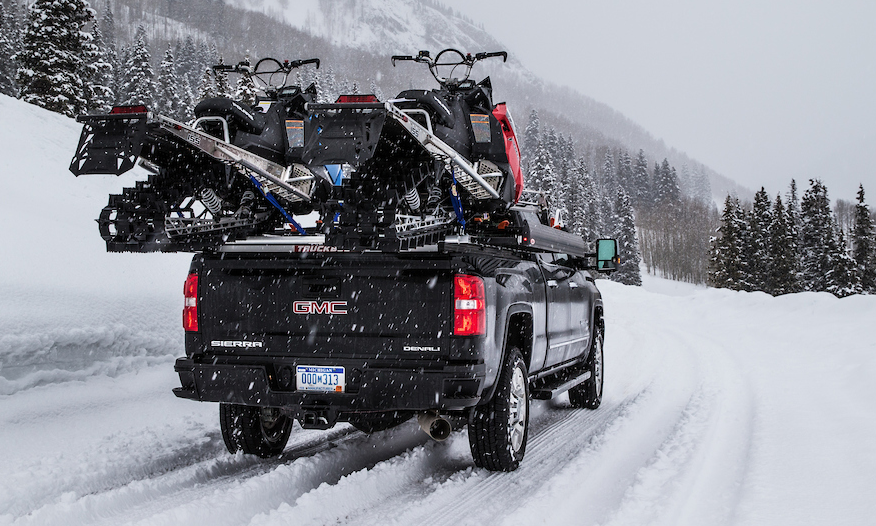 Two snowmobiles, no trailer? No problem.

As expected for a line-topping luxury model, the Denali boasts classy interior materials—the contrasting stitching and leather-wrapped steering wheel were especially nice. Maybe we’re too soft for a truck like this, but we wished for push-button-start feature, like the Ford Super Duty trucks offer. On the plus side, the 4G LTE WiFi capability was a real godsend in the mountainous terrain of our test-drive route, where reliable cell-phone reception was often hard to come by. 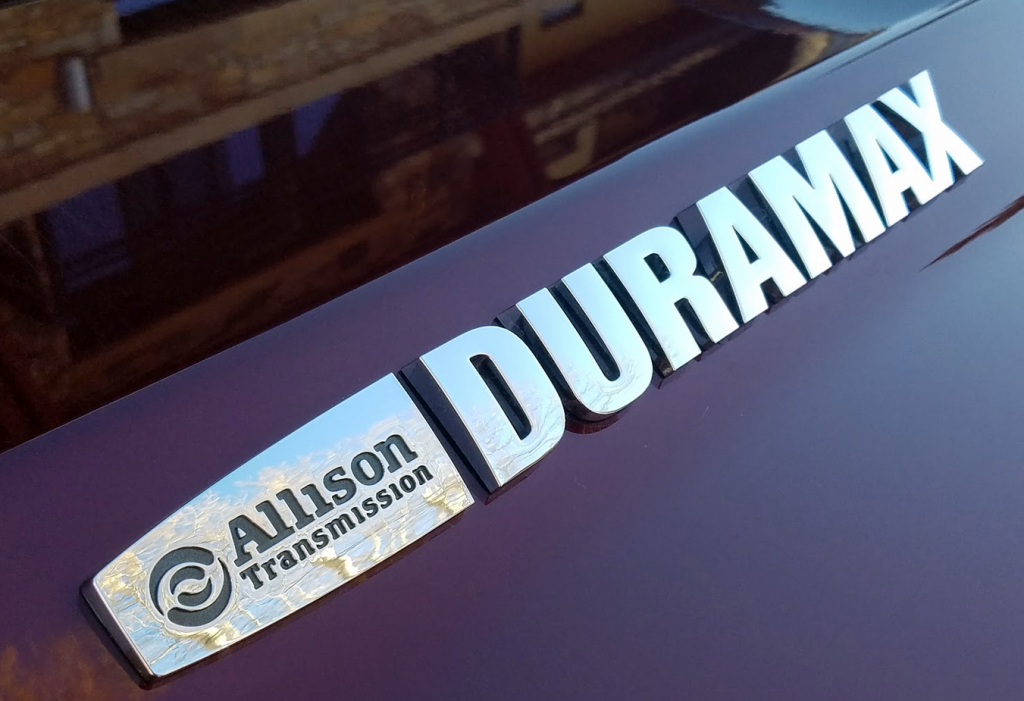 Along with the new scoop, hood badges announce the presence of the Duramax engine. Choosing the Duramax tacks on more than $8000 to the base price.

Though the Sierra HD’s maximum towing capacity is 20,000 pounds with a conventional trailer and 23,300 with a fifth-wheel setup, GMC engineers say they were not chasing class-topping “bragging rights” towing numbers in the development of these pickups—rather, the focus was on all-around towing confidence. GMC engineers aimed at satisfying the majority of buyers who tow with their heavy-duty pickups—and research shows that those customers usually tow around 15,000-18,000 pounds.

GMC provided some loaded-up Sierra Denali HDs so we could test their towing and hauling prowess. We drove a 4WD 2500 model that was carrying two snowmobiles over its cargo bed (total weight—1150 pounds) and a 4WD 3500 dualie that was towing a fifth-wheel camper trailer that weighed 7200 pounds.

Both pickups handled their loads with aplomb, and we also appreciated the Sierra HD Duramax’s handy towing-assist features on our drives. The exhaust-braking system—which uses engine compression and backpressure from the variable-vane turbocharger to help slow the vehicle on sharp descents—provided piece of mind when hauling that camper trailer down a steep hill. The trailering camera feature was another great help—press and hold the “back” button below the IntelliLink screen, and a camera menu pops up that allows you to choose left- or right-side camera views, a pickup-bed view that’s helpful for connecting a fifth-wheel trailer, or a trailer camera if your trailer is so equipped. The left and right camera views can be combined, and the pickup-bed camera can be added for a two-way or three-way split-screen view. There are other subtle, thoughtful touches as well—when in towing mode, one of the gauges in the instrument cluster’s digital readout changes from battery charge to transmission-fluid temperature. 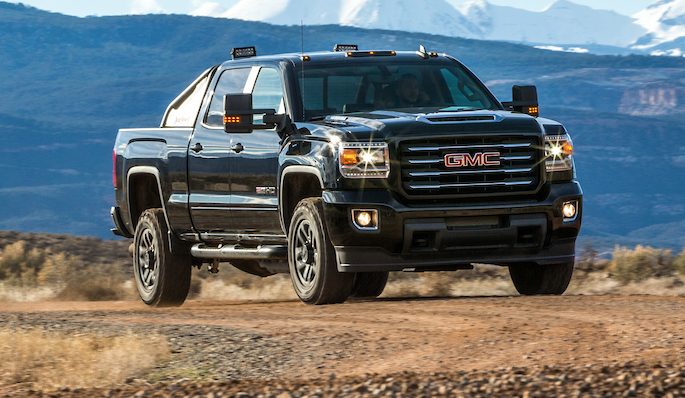 None of the incredibly capable diesel engines on today’s heavy-duty pickups come cheap, and the Duramax is no exception. The “Duramax Plus” diesel engine package was priced at $9255 on the 4WD Denali 3500 Crew Cab Dualie we tested, and $9550 on the 4WD Denali 2500 Crew Cab we drove (the price difference is because the 2500’s package included a power-adjustable heated trailer mirrors that are already included on the 3500 dualie). Both packages included a $750 discount that dropped the price into the $8K range, but the Duramax is still one pricey powerplant.

For the select group of customers who need the heavy-hauling/towing capability it offers, the GMC Sierra HD Denali Duramax offers a high level of get-the-job-done functionality along with a surprising degree of overall refinement.