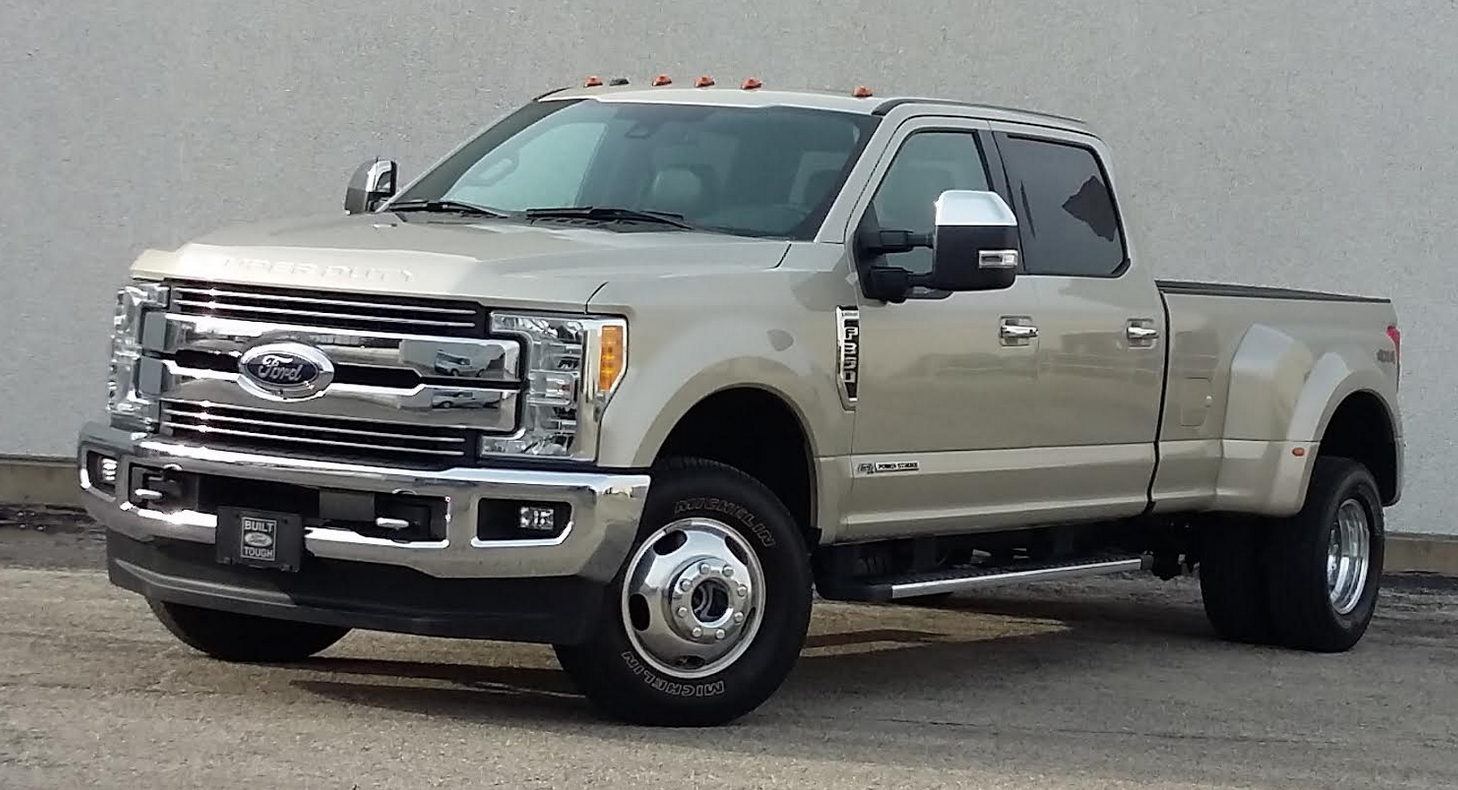 Base price: $60,145 (including Power Stroke diesel engine, but not including $1295 destination charge)

The good: Relatively easy to drive, given its mass

The not so good: Thirsty relative to lighter-duty pickups, expectedly difficult to maneuver in parking lots and garages

Every once in a great while Ford lets loose one of its most imposing F-Series pickups for reviewers in Consumer Guide®’s neck of the woods to try out. It’s usually long, it’s usually wide, and it’s always powerful.

With the arrival of a new generation of Super Duty trucks for 2017, that time has come again. CG’s test F-350 was long: a 164-inch-wheelbase crew cab with an 8-foot cargo bed. It was wide, outfitted with a “dually” rear axle. And it certainly was powerful with the torque-packed 6.7-liter Power Stroke turbodiesel V8 engine. 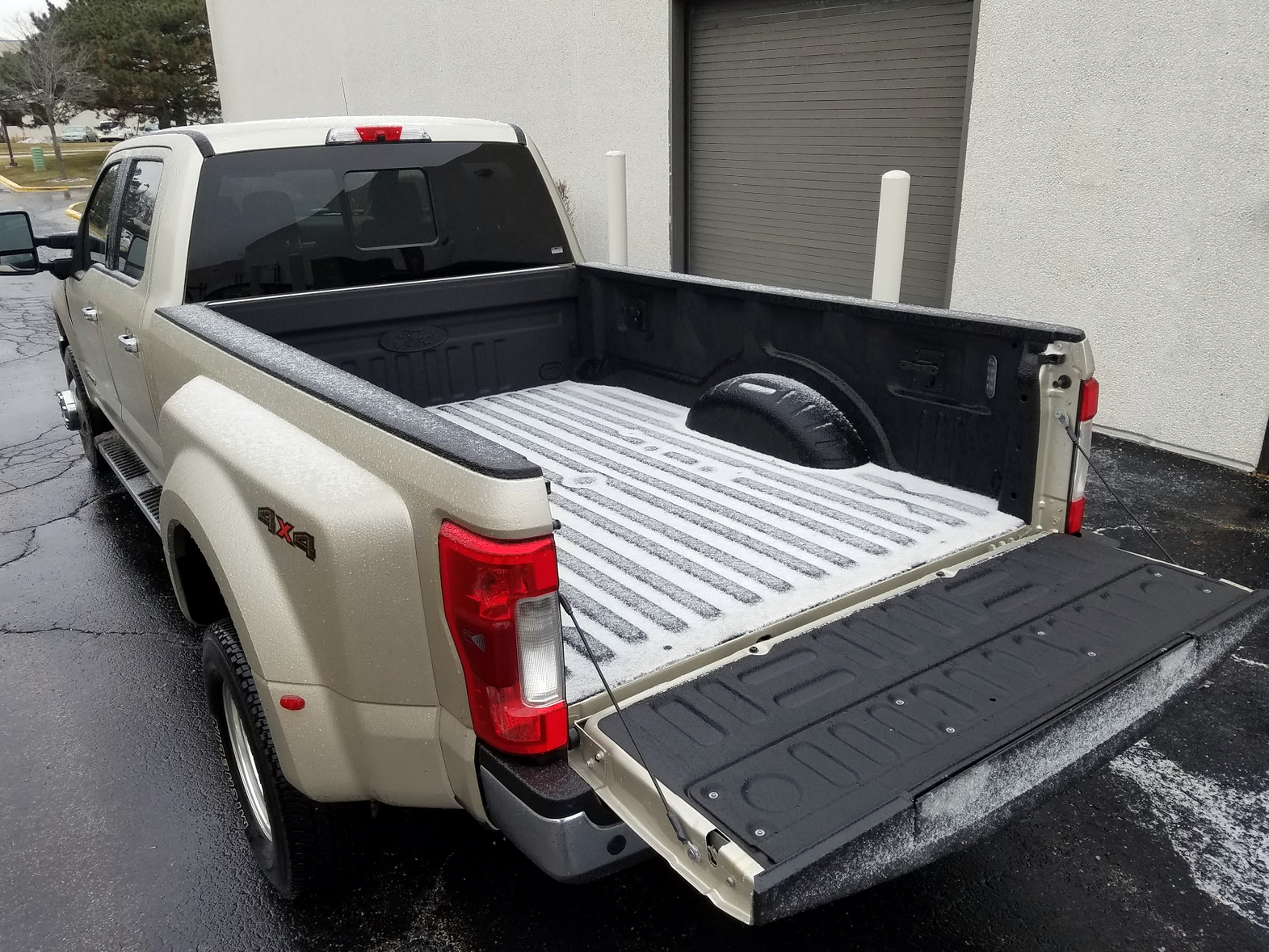 This latest specimen of Pickupsaurus gigantis dearbornii adopts the aluminum body panels that came in with the 2015 F-150. The test truck was dressed up in Lariat trim, which sits squarely at the center of five available levels. As such, it delivered capability with comfort.

A 6.2-liter gasoline V8 is standard in the F-350 but obtaining class-leading yank calls for stepping up to the Power Stroke diesel. Horsepower is pegged at an impressive-enough 440, but it’s the torque rating that drops jaws—925 lb-ft that peaks at 1800 rpm. It’s smooth, ready power. Some big powerplants need to build up to the moment when they can start motivating the truck they’re in. The Power Stroke gets about it promptly. In the untaxed commuter driving that this tester did with the F-350, response to the throttle was fairly quick, whether getting away from a stop sign on surface streets or being called on to pick up the pace when expressway traffic became freer flowing.

The F-350 cabin is expectedly roomy in both the front- and back-seat areas. In Lariat trim, it’s nicely finished as well. The 2nd-row seat bottom folds out of the way to form a large storage area.

After sitting out on Chicago winter nights (though not the coldest of the season), starts came with a very brief delay. Effectively paired with a 6-speed automatic transmission, the Power Stroke gave this driver 14.76 miles per gallon of diesel fuel in a stint of 172.2 miles. City-type driving accounted for 71 percent. As noted, all of that was without a load, and all but a few miles were in rear-wheel-drive mode. Before filling up, the “miles to empty” readout showed 496, which, with the distance already driven, suggests a potential range of well more than 600 miles on a single 48-gallon tank of fuel. 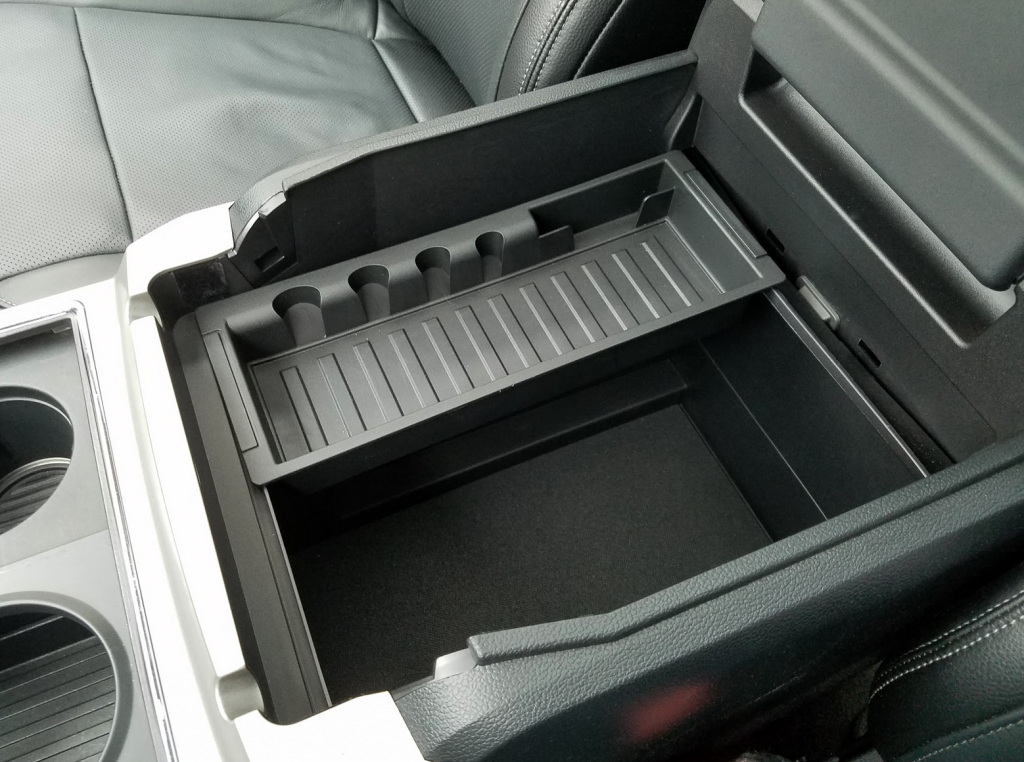 Depending on the cab configuration and rear axle ratio, a four-wheel-drive F-350 dually with the Power Stroke mill can tow as much as 21,000 pounds with a conventional hitch or 31,900 pounds with a fifth wheel. Though it didn’t come into play during this driver’s run in the truck, the F-350 is endowed with standard trailer sway control and trailer brake control. Related options on the test vehicle included a trailer-tow camera system with reverse guidance and blind-spot alert that also monitors a towed trailer.

While the F-350 can get up and go reasonably quickly, directing it is more of a task. Given the wheelbase and high stance, the test truck was not something to be tossed about on a whim. Lane changes in traffic take more than the usual amount of planning and lots of reliance on the big external mirrors. Steering is heavy—you work this baby a bit—and considering that and the vehicle’s length, it definitely is no parking-lot piranha. I wouldn’t have believed it had I not felt it myself, but there are crosswinds powerful enough to nudge this monster off course. Even with the long wheelbase it’s a pickup truck, not a stretch limo, so road imperfections jolt the cabin.

Speaking of the cabin, having sufficient head- or legroom is the least of any passenger’s worries. Doors open wide for ease of entry and exit. The test truck’s standard step bars were replaced by “angular chrome step bars” (essentially running boards) in the Chrome Package option. They are necessary for safe and easy access. Drivers will find the large windows helpful.

Lariats come with leather seating and a leather-wrapped steering wheel, plus ample brushed-metal highlights. Rear seat cushions are split 60/40 and easily fold up to create a very large interior storage space. Personal-item storage encompasses a sizable glove box and ample covered console box. There is room in the console for four open cup holders—or two cup holders and an exposed bin; a sliding panel with cup holder cutouts can be pushed aside to access the storage space. Long pockets are found in all doors. Rear passengers have use of pouches in the backs of the front seats. A pull-down center armrest incorporates a pair of pop-out cup holders, with two more drink receptacles cut into the back of the center console for rear riders’ use.

The Power Stroke diesel engine cranks out an awe-inspiring 925 lb-ft of torque.

The standard SYNC 3 infotainment system works easily through a vibrant 8-inch touchscreen, though audio has freestanding power and tuning knobs, and a bank of six “favorites” buttons. The dual-zone automatic climate controls sit below these external audio controls. Dials regulate temperature but repetitive push buttons govern other functions, and controls for things like fan speed and optional seat heating/cooling ride very low. Tachometer and speedometer dials are big and legible. Between them in the test truck were a large configurable vehicle-information display easily worked by steering-wheel thumb buttons. A dial on left side of the central control stack readily makes electronic selection of two-wheel, four-wheel-high, and four-wheel-low driving modes.

It’s probably no surprise that the price tag for something so massive is pretty big itself. With four-wheel drive, the dually axle, and the Power Stroke engine the tab is up to $60,145. CG’s test truck was quite a bit costlier though, as it was kitted out with a long list of stand-alone options and a pair of option groups, including one that added navigation, a panoramic moonroof, and several functional conveniences. As such, the Lariat straddles the line between work and recreational use, but other F-350 models—just as strong—veer closer to either of those extremes.

Ford’s Super Duty trucks don’t make much sense in urban environments, but for those who need the capability, these burly pickups are surprisingly refined and easy to live with.