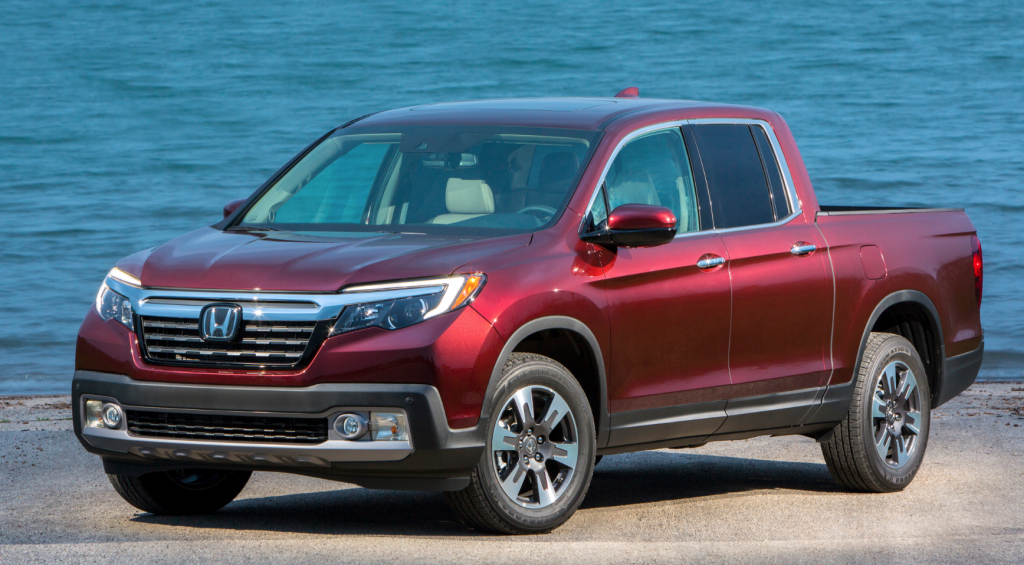 Honda’s Ridgeline pickup truck returns after a 2-year absence as a 2017 model. Due on sale in June, prices start at about $30,000 for the base front-drive version and run up to near $44,000 for the top-line AWD Black model.

If you applied the famed “Which one is not like the others?” Mensa question to the compact-pickup class, the obvious answer would be … Honda’s Ridgeline.

Or at least, it used to be. Introduced for 2006, the Ridgeline was discontinued after 2015–though Honda acknowledged at the time that a redesigned version was on the way. That replacement appears this June as a 2017 model, boasting many of the same attributes and some interesting new features, but with a decidedly different look. 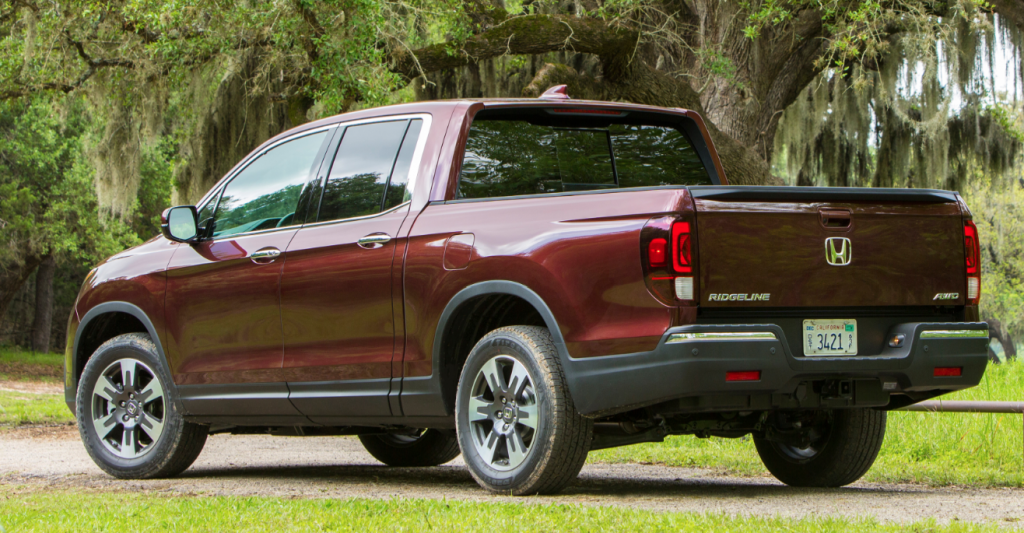 During its tenure, the original Ridgeline stood out as being the only compact pickup built on a carlike unibody platform with independent rear suspension, dual-action tailgate (opening both down and to the side), a lockable “trunk” under the floor of the cargo bed, and the ability to carry 4×8 sheets flat on the cargo floor. More importantly, it offered the convenience of full-time all-wheel drive (which can be left engaged on dry pavement), while all its rivals were available only with part-time 4-wheel drive (which cannot). Today, the only other compact pickup to offer a full-time 4WD system is the GMC Canyon, which itself was redesigned for 2015.

What the Ridgeline didn’t offer was much choice. It came only as a crew cab with a V6 engine and all-wheel drive in just five trim levels with no options. By contrast, rivals offered regular, extended, and crew-cab bodies with 4- or 6-cylinder engines in 2- or 4-wheel drive with a virtual slew of options that allowed them to be tailored to taste – and price.

All of those advantages – and some of the disadvantages – remain on the redesigned Ridgeline.

Compared to its predecessor, the Ridgeline is now three inches longer on an equally longer wheelbase. Its configuration is the same, though the profile becomes more “truck-like,” with a squared-off roofline replacing angled rear roof pillars that flowed into likewise-angled cargo-bed sides. It’s again offered only as a crew cab, though in recent years, crew cabs have far outsold regular- and extended-cab models combined. A 3.5-liter V6 remains the only engine offered (still mated to a 6-speed automatic transmission), but it adds 30 horsepower for 280 total. The all-wheel drive, dual-action tailgate, and cargo-bed trunk return, but front-drive models have been added to allow for a lower price point – and better fuel economy. EPA fuel-economy estimates have been raised by about 4 mpg to 18 city/25 highway/21 combined with AWD, 19/26/22 with 2WD. There are still no options, but more trim levels are now offered, partly to account for a number of newly available features. 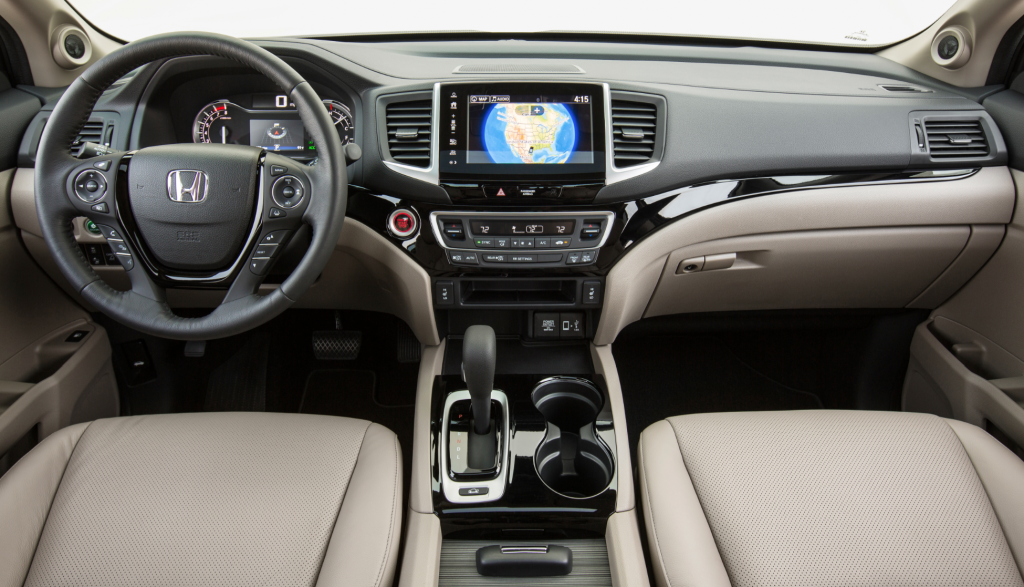 Padded surfaces abound inside, while available two-tone color combinations provide a rich look. The 8-inch touchscreen featured in upper-line models (shown) has no knobs or buttons; all adjustments are made through the screen or steering-wheel controls.

As might be expected, many of those new features fall under the “high-tech safety” heading, though most are only offered on top-line trim levels (noted below). Others are perhaps less expected. Among them is a 110-volt AC household power outlet in the cargo bed, which itself can be turned into a speaker. The latter may sound like a mistake, but it’s not. The bed walls are made of dent-resistant plastic (as is the floor), behind which are the same kind of “exciters” that are found in normal speakers; the bed walls become the normal “cone.” Though it seems strange, it works very well, and makes for quite the tailgater arrangement. The outlet is contained in a covered compartment in the bed wall, providing 150 watts while the vehicle is being driven, 400 with the engine running and the transmission in Park. The compartment is large enough to hold a charger and battery for cordless tools, thus allowing the battery to be charged while underway. At rest, the 400 watts is enough to power an 80-inch big-screen TV.

Returning is the Ridgeline’s unique, lockable cargo-bed trunk, which sits just ahead of the rear bumper. When the two-way tailgate is opened to the side like a door (it can also swing down, like a traditional truck tailgate), the lock and release handle for the trunk are revealed. The trunk is quite large –designed to hold a set of golf clubs or an 82-quart cooler – and the floor of the trunk is now flat rather than having a bulge at one side as did the former Ridgeline.

There are now seven trim levels vs. the previous five, with all offering front-drive versions except the top two. The model/price ladder (all prices include the $900 destination charge) consists of: 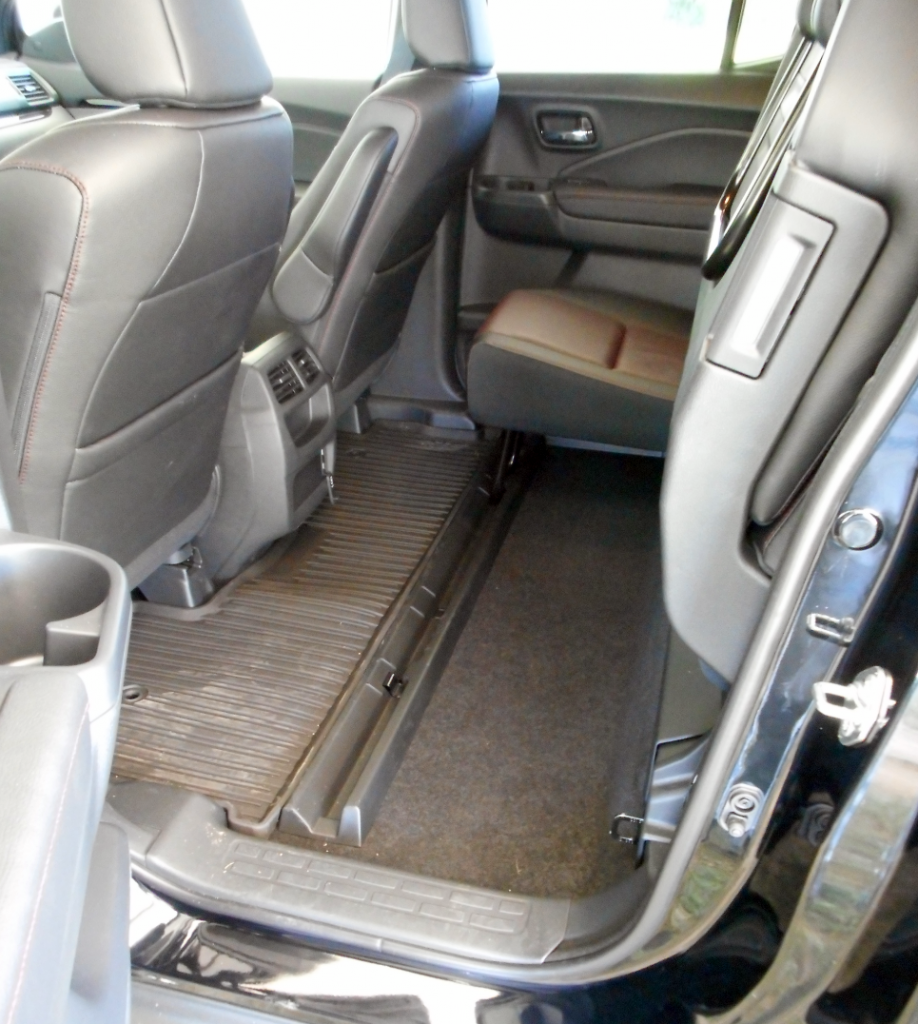 There’s a storage “channel” underneath the rear seat cushions, which can be flipped up to reveal a large, versatile cargo area that Honda says will hold a bicycle with the front wheel still on (though turned to the side).

Step inside the Ridgeline, and you’ll find plenty of padded surfaces, including the dash top, door tops, and armrests. Black and two-tone color combinations are offset with piano-black trim and matte-silver accents. Visibility is very good all around, and the standard multi-view rearview camera (which includes 180-degree wide angle and top-down to see the bumper and trailer hitch) helps when backing. Interior storage is impressive, consisting of a decent-size glovebox, a dash bin, forward console tray, large 2-tier console box with sliding cover, two cup holders, and door panels that host map pockets and two small bins. 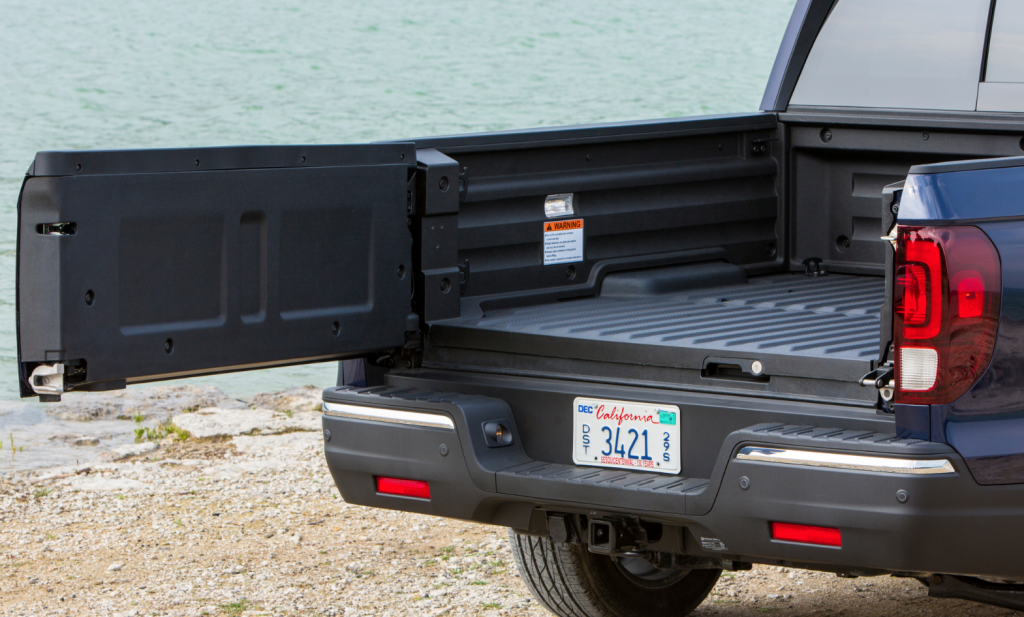 The two-way tailgate can be opened either down — like a conventional pickup — or to the side. The latter reveals the lock and latch to the underfloor trunk.

There’s great headroom front and rear, and the interior is wide compared to some competitors, making for more elbow room. The front seat doesn’t slide back as far as some taller folks might prefer, but there’s good legroom in back. Step-in height is reasonably low. The rear seat cushion flips up to reveal not only a wide, full-length cargo hold (Honda says a bicycle will fit with the front wheel still on), but there’s also a storage channel underneath the seat cushion when it’s lowered.

But the cargo star is undoubtedly the bed. Most of its many features have already been mentioned, but it’s worth adding that the Ridgeline remains the only compact pickup that can carry a 4×8 sheet flat on the floor (which now measures 50 inches wide between the wheel wells — 60 inches wall to wall — and 63 inches front to back) and includes eight tie-down hooks.

Thanks largely to its unibody construction and independent rear suspension — both unique among pickups of any size — Ridgeline continues to offer a carlike ride that might well be the best of the breed. The 3.5-liter V6 provides plenty of power, and the automatic transmission usually kicks down quickly for more power (we noticed a slight hesitation to do so only at certain speeds). Honda says the Ridgeline’s 1584-lb. payload capacity (with AWD) is best in class, and all Ridgelines come standard with a tow package rated at 3500 lbs on 2WD models, 5000 lbs on AWDs. 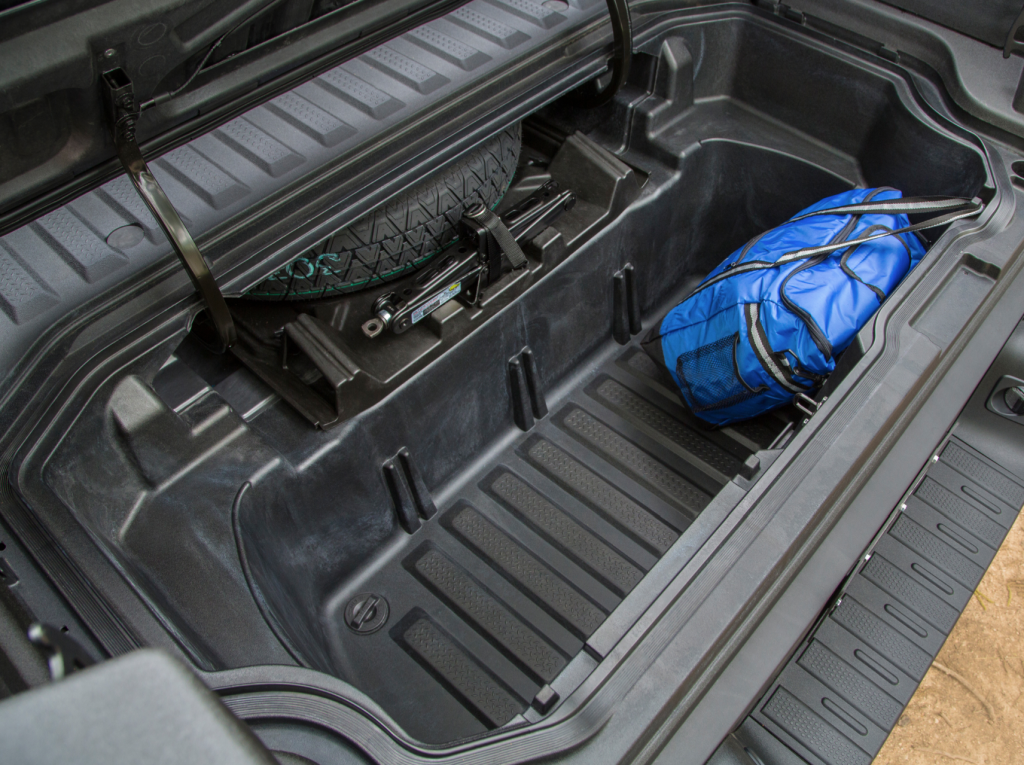 Ridgeline’s exclusive underfloor trunk can hold a golf bag or an 82-quart cooler, and includes grocery-bag hooks and a drain plug.

“Honda” probably isn’t the first make that pops to mind when you think “pickups.” But if you’re looking for a compact hauler that offers more carlike driving characteristics with a host of neat features, the Ridgeline might well answer the question of which choice is the best one for you.