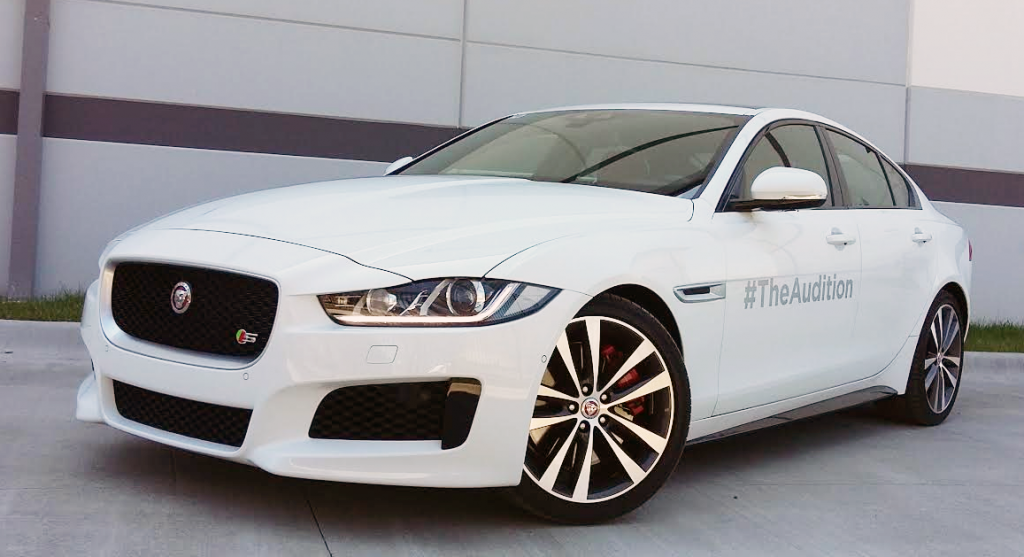 Jaguar re-enters the premium-compact segment after a near-decade absence with the 2017 XE. Due on sale this spring, it will come in rear- and all-wheel-drive versions with prices starting at about $36,000.

Despite the fact that the famous brand has been around since the 1940s, Jaguar has devolved into somewhat of a “forgotten” premium make in recent years. Part of that stemmed from a lack of product diversity, something the company is working hard to correct.

One of the first steps took place in 2013 when Jaguar re-introduced all-wheel drive to its lineup. For several years, its wares came only in rear-drive form, a growing liability as AWD became increasingly popular. But the company still didn’t have an offering in the hot compact segment (the all-important “low cost” entry point for most premium makes), nor was there an SUV in the showroom. Both of those product shortcomings will be addressed when the XE compact sedan and F-Pace compact SUV hit the stage this spring. 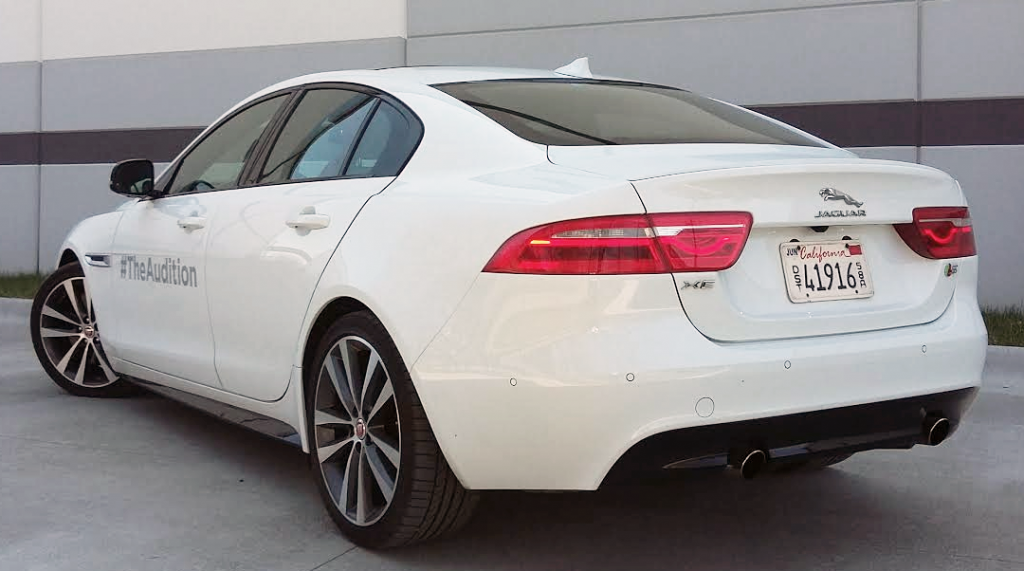 Although both the XE and F-Pace were in attendance at a recent unveiling, only the XE was made available for a test drive – and even then, only a brief one. But it was enough to get a taste of the new small car that is undoubtedly going to be a very big addition to the Jaguar family.

Like the competing BMW 3-series – often considered the benchmark of the premium-compact class – the XE comes in rear- and all-wheel-drive form. Also like the BMW, the base engine is a 2.0-liter 4-cylinder turbo, with a 2.0-liter 4-cylinder turbodiesel available at extra cost. A pressurized 6-cylinder engine is the top offering on both, but philosophies on them differ. Whereas the BMW has a turbocharged inline six, the Jaguar gets a supercharged V6: the same 340-horsepower 3.0-liter unit found in other Jaguars.

Three XE models are offered. The base 25t carries a 240-horsepower turbo four and starts at $35,895 including destination. It is offered only with rear-wheel drive in three trim levels.

Jaguar quotes the 0-60 sprint for the 35t at 5.1 seconds with rear-wheel drive, 5 seconds flat with all-wheel drive. A brief test made those numbers seem plausible. Nail the gas from a stop, and the 35t gets a good jump off the line; hit it from a roll, and the 8-speed automatic transmission standard on all models kicks down fairly quickly for more power. In either case, flooring the throttle prompts a loud, sporting “brap” from the exhaust, which only serves to enhance the experience. 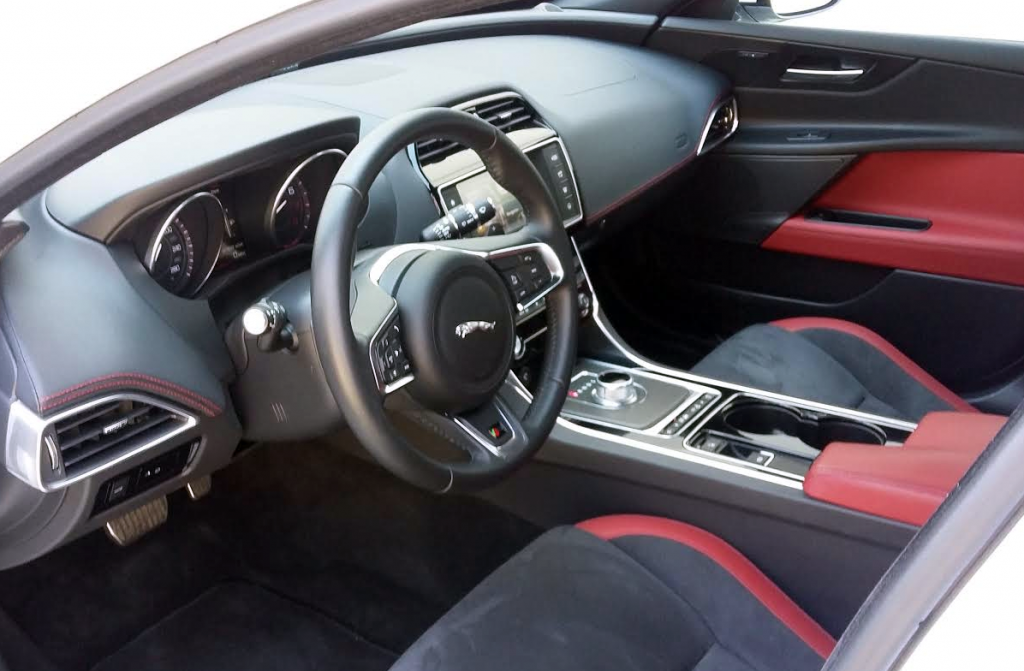 Our test drive was in a European-spec 35t all-wheel-drive “S” model, which is essentially what will be the R-Sport in the U.S. Aside from the badge change, Jaguar says the grey strips seen along the bottom sides and back of the vehicle photographed will be body color on “our” cars.

For a car riding on 20-inch wheels (optional) shod with low-profile tires, the R-Sport rode quite well over the pockmarked urban streets of our drive route. However, that was in “Normal” mode. Switch to “Dynamic” mode, and both the steering feel and suspension firm up noticeably, yet even then the car didn’t pound over bumps, and it indeed exhibited a sportier feel in turns. There’s an independent “Sport” mode activated by the pop-up console shift knob (a Jaguar trademark that’s both cool and functional), which holds gears longer and sharpens the shifts. The combination of adjustments allow for a fairly smooth ride and easy maneuverability in the city, with much more sporting aptitude in the twisties.

Like other Jaguars, the XE is built on an aluminum-intensive architecture to save weight. Like the competing BMW 3-Series, it has a long wheelbase with short front and rear overhangs and “cab rearward” proportions resulting in the classically sporty long hood/short deck profile. All versions come with Jaguar’s EliteCare, which includes 5-year/60,000-mile coverage for the bumper-to-bumper warranty, scheduled maintenance, and roadside assistance – what Jaguar claims is the best coverage in the segment. 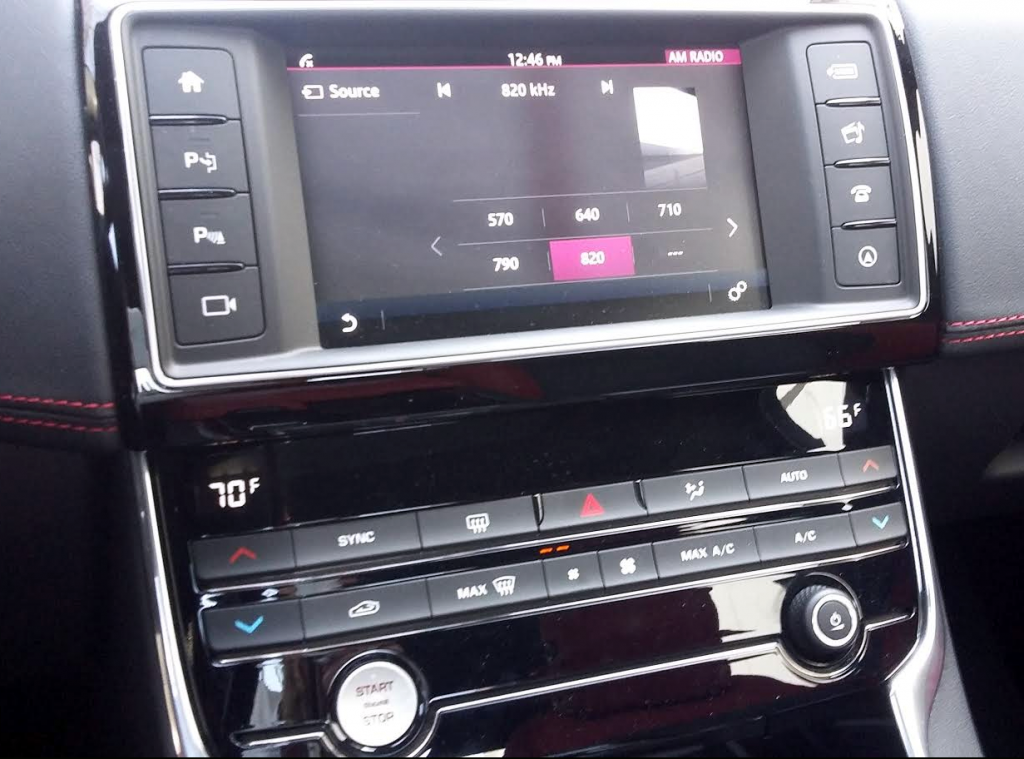 The audio and climate systems use more traditional buttons than is the current trend, though band and station selection is done through virtual buttons on the 8-inch dashboard screen.

As might be expected, the XE is available with the usual assortment of high-tech features. On the infotainment side, that includes an 8-inch touchscreen with smartphone-like pinch-to-zoom functions, along with Jaguar’s InControl Apps, which allows using the car’s touchscreen to control apps from your phone. It also has a Remote function that lets you use your phone to lock and unlock the doors, activate the alarm, and start the engine to pre-heat or pre-cool the interior. Less common is an optional Head-up Display that projects speed and navigation readings onto the lower part of the windshield near the driver’s line of sight.

One of the more unusual elements of the XE is the wide assortment of interior colors and trim materials offered. In addition to the usual black, grey, and tan leather are brown, ivory, and a red/black mix, and trim can be in piano black or different tones of wood or textured aluminum.

Step inside the XE and you’ll find nicely padded surfaces and a simple, straightforward look. Analog instruments are in two traditional round pods in front of the driver with a small screen in between, while infotainment and climate controls consist of traditional buttons and knobs mixed with some on-screen controls. 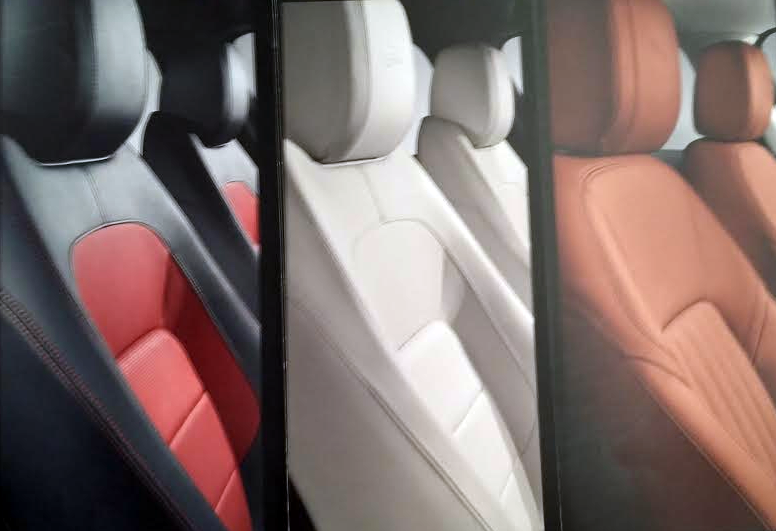 The XE offers an unusually wide selection of upholstery colors and trim choices, allowing buyers to customize the interior to their taste.

Visibility is decent, but not great. While the front roof pillars are fairly thin, the side and rears are much thicker, blocking a good deal of view. There’s ample head and legroom in front for even tall drivers. It’s tighter in back, with headroom only sufficient for those up to about 6-feet tall, but they’ll find adequate legroom unless the front seat ahead is pushed far back.

Interior storage is adequate, but no more. A modest-size glovebox is augmented by a small console box hosting Aux/USB/12-volt plugs, along with two open cupholders, a small forward-console bin, and the usual map pockets in the doors.

Likewise for trunk space. The area is wide at the rear, but sickle-shaped hinges dip into the load area (though they’re covered to prevent cargo damage), and there’s no underfloor storage. However, the rear seat backs can be folded to expand the space, and they rest about 2 inches below the level of the cargo floor – rather odd, though much better from a loading standpoint than if they rested above it. Our tester was fitted with a power trunk lid, a luxury nicety.

While it’s a bit disappointing that the base 25t isn’t offered with all-wheel drive (which, if going by the $2500 rear- to-all-wheel-drive “jump” in other versions, would have it starting at a very inviting $38,395) nothing else about the XE is. Although equipment lists were not available at the time of this writing, prices seem to undercut those of most class rivals, and performance and accommodations are at least competitive. What stands out are the wide variety of available interior appointments that allow you to customize your car without the typically high cost of doing so, and Jaguar’s EliteCare program, which can save thousands of dollars (and no small amount of aggravation) over its 5-year span.

For many premium makes, their compact sedan is the line’s best seller. Even more important, perhaps, is that these lower-cost models open the brand to a larger audience – and one that will often return to upgrade in the future. As such, the XE is an important new offering for Jaguar, and it might well be an attractive new offering for you.