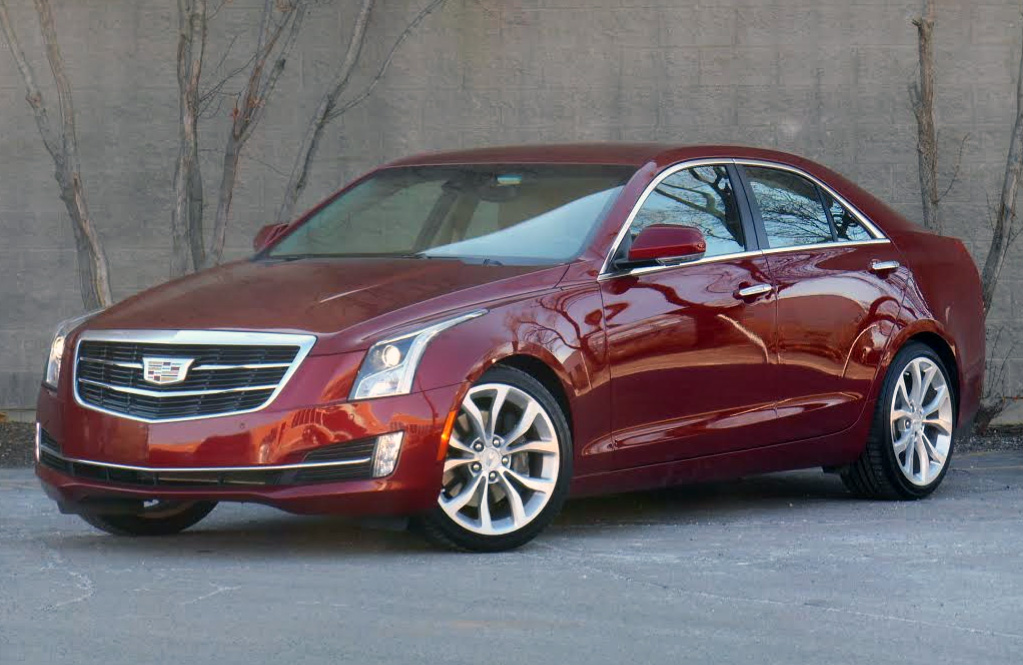 The not so good: Notchy shifter, limited rear-seat space

Cadillac has produced a compelling compact sedan in the ATS. That is especially true when the car has the 2.0-liter turbocharged 4-cylinder engine that gets added grunt for 2015.

While the turbo engine’s horsepower rating stays unchanged at 272, where it’s been since the ATS’s introduction for 2013, torque is being increased to 295 pound-feet—a gain of 35. That now gives the 2.0 the most torque of the 3 available ATS engines, and it hits its peak sooner than the naturally aspirated 2.5-liter four or 3.6-liter V6 find theirs. 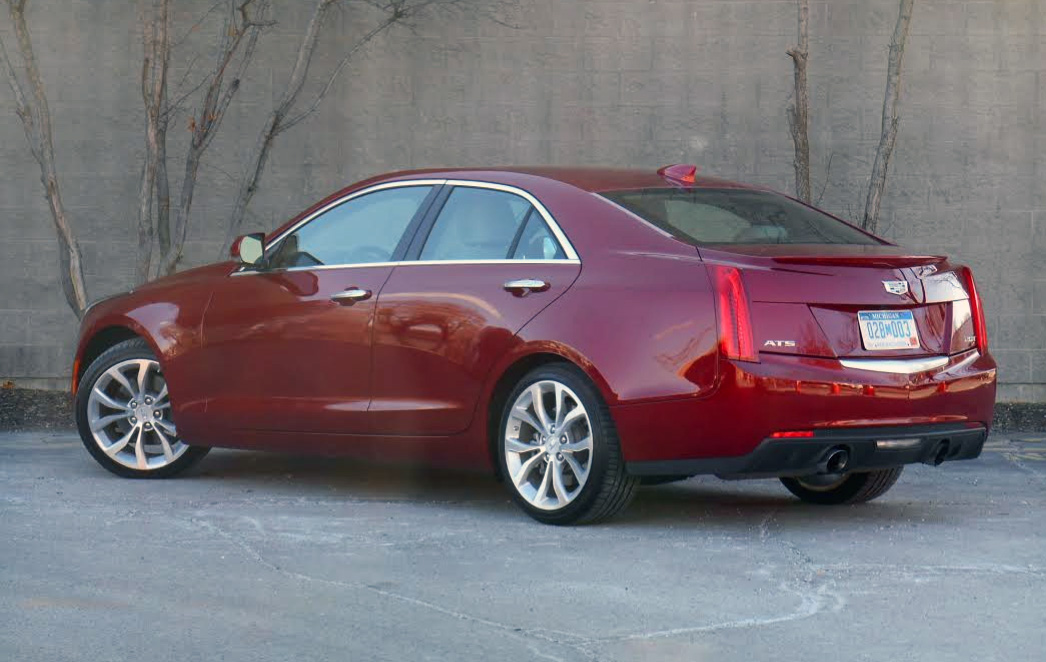 The added twist makes a car with the 2.0T mill ready to go with authority from a standing start, and it will get you up to and keep you at highway cruising speeds without breathing hard. The rear-wheel-drive turbo ATS Premium Collection sedan that Consumer Guide® tested (all-wheel drive is available) came with a 6-speed manual transmission, a nice touch for enthusiast drivers. Or at least it ought to be. Frankly, this tester would have liked a little more precision from the shifter. EPA fuel-mileage estimates for the 2.0/6-speed powerteam are 19 mpg city, 30 mpg highway, and 23 mpg combined. In a stint of 107.4 miles, 59 percent of which were under city driving conditions, this driver averaged 18.91 mpg.

CG is no stranger to the “baby” Caddy, having tabbed it its “Best Buy” for 2015 in the premium-compact class. The boost in torque for the turbocharged engine is just one of several modifications and improvements made to the ATS for ’15. The biggest one is the addition of a coupe body style to the family. Other new features include a revised lower front fascia and a grille with Cadillac’s newest interpretation of its historic crest, an upgraded OnStar communication system with a built-in Wi-Fi hotspot, and some added capability for the Cadillac User Experience (CUE) touchscreen-enabled infotainment system. Our test car didn’t have it but a system that will charge phones by placing them on an inductive mat is expected to be available during the model year. 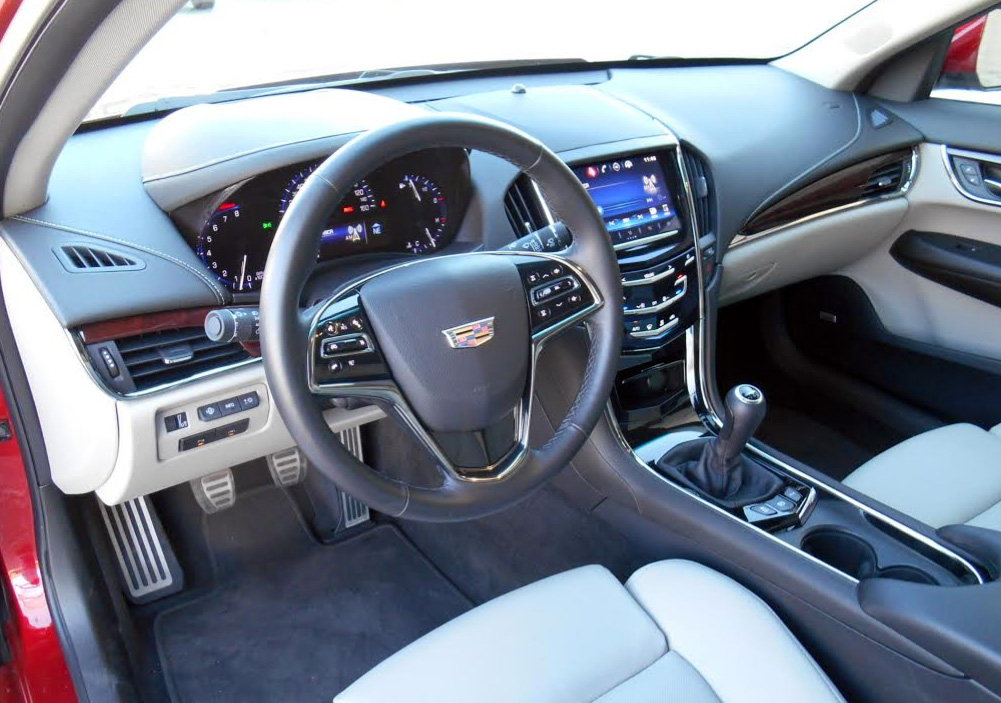 The ATS boasts one of the segment’s better-finished cabins.

Outfitted with a fully independent suspension, the ATS displays a generally nice ride and predictable, easy handling. The magnetic-damping suspension included in the uppermost Premium trim level has “Tour” and “Sport” modes that are sufficiently different in behavior. At speed on a stretch of open expressway, switching from Tour to Sport invited a somewhat twitchier ride over expansion joints and pavement waves, so Tour struck this driver as better for sustained open-road driving. Though unconnected to suspension settings, response from the variable-effort electric power steering seemed to change, too. It felt tighter with better control when the car was in Sport mode. The 4-wheel disc brakes (with Brembo performance binders up front) were great.

The Premium Collection ATS comes with a fairly luxurious interior, but the degree of comfort depends on where you sit. Front-row space and seating comfort aren’t bad, as was head room in our test car that came sans moonroof. Foot space can be a little crowded in the manual-shift car—this tester’s left foot barely cleared clutch pedal—but a dead pedal up against the kick panel was a welcome touch.

On the other hand, the rear seat is only big enough for 2 (the driveline tunnel wipes out any hope for a middle passenger) and leg room is pretty tight, a problem that dogs many cars in this class. This lack of space also complicates entry and exit. Head room isn’t as lofty as in front, either.

The Redesigned 2015 Audi A3: A Change in Direction

Premiums feature leather upholstery and wood trim. Soft-touch surfaces are abundant on the dash, doors, and console. Storage consists of a moderately sized glove box, modest covered console box, 2 open cup holders, small covered bin with power plug-in under center stack, and long divided pockets in the front doors, plus a space secreted behind the 8-inch CUE screen in the center of the dash. Rear-seat storage consists of a pouch on the back of each front seat, and a pull-down center arm rest with covered storage and 2 cup holders. There are no door pockets, though.

The trunk has a wide opening relative to the width of car, but trunk space is somewhat narrow between wheel houses, and the floor isn’t fully flat—it raises slightly at the far right and left. There is an open bin for loose items to the right, as well as some additional space in a tray under the trunk floor. Most ATSes come with 60/40 rear seats with a central pass-through. When folded, the seats aren’t completely flat, but the transition from the trunk is uninterrupted.

Most ATS models come with the CUE system; in Premiums, this includes navigation. Unlike some luxury-class brands, particularly the Europeans, Cadillac gets by without an overly complicated “joystick”-controlled infotainment system. Still, CUE has its quirks. One of the benefits claimed for the system is that it has on-screen “swipe” and “pinch” functionality that people know from their tablets and smartphones. That’s true, but those devices seem to swipe with less effort than is required on a CUE screen. Cadillac’s still got some fine-tuning to do with it.

Even at this top level, a few more luxuries like a moonroof and heated seats and steering wheel still cost extra. The only option on CG’s tester was Red Obsession Tintcoat paint ($995) for an as-delivered bottom-line price of $47,605. Still, in the ATS, Cadillac has turned out a top-notch machine with a lot of leeway for price, equipment, and driving character in the actively contested premium-compact field.

As the entry-level and perhaps most “youth-oriented” car in the Cadillac stable, the ATS is tasked with bringing new buyers to the brand – mostly younger buyers who wouldn’t otherwise think “Cadillac.” Certainly it’s not the marque’s traditional customer. 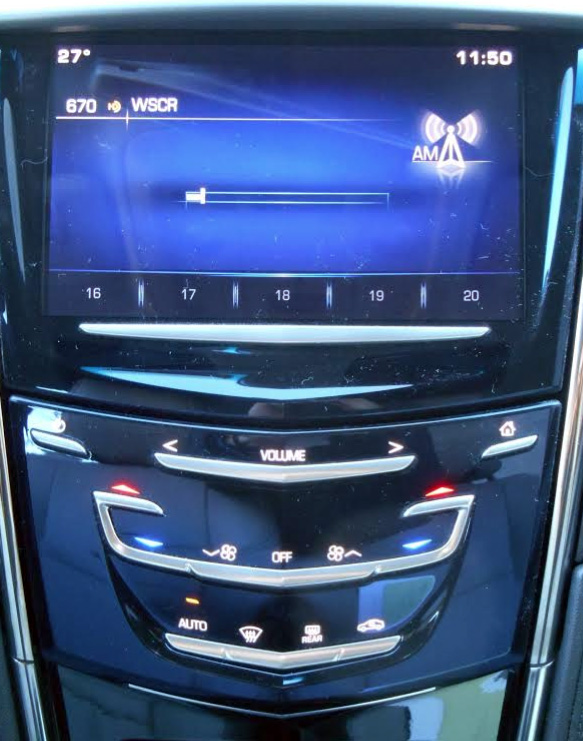 The ATS’s center console looks clean, but the touch-sensitive “buttons” require some getting used to.

But this isn’t Cadillac’s traditional car. The compact-sized ATS doesn’t boast the kind of rear legroom one might expect in a Cadillac; six-footers might be able to sit in tandem, but the rear-seater wouldn’t have a surplus of space. Furthermore, the hump in the floor beneath the rear seat cushion protrudes enough into the footwell as to somewhat impede exit.

It also doesn’t have a traditional Cadillac ride. It’s not uncomfortable – in fact, it’s quite composed – but the firm, European-style suspension can cause some bobbing over bumps. However, that same suspension provides equally European-like handling, with little cornering lean and crisp steering response.

Our tester was fitted with what will likely be an unusual powertrain combo: a 2.0-liter 4-cylinder turbo with a 6-speed manual transmission. Unlike many fours, this one is a model of smoothness and audible refinement, producing little more than a muted whine under acceleration. And unlike some turbos, there was minimal lag when you jumped on the throttle. While the clutch was as smooth as the engine, the manual transmission was less impressive, with a very notchy-feeling shifter that often resisted going into second gear. In a stretch of 85% highway driving, the ATS averaged 28.1 mpg. This compares favorably with the car’s 19 city/30 highway EPA rating. Premium fuel is recommended, but not required.

Like the powertrain, the interior is a mixed bag. Certainly the materials are up to the price, with padded leather (some rather thin and hard) covering many surfaces, including the door tops and sides of the console – the latter a rare touch. Wood and chrome accents add to the rich look.

And then there’s CUE. The “Cadillac User Experience” (really … that’s what it stands for) is the company’s branded infotainment interface, and it isn’t a good one, at least to this tester. It seems that there’s always one step more than seems necessary to perform simple functions.

From the driver seat, visibility is good to the front corners thanks to thin roof pillars. But those at the sides and rear are rather thick, which impedes the view, though a rearview camera helps when backing.

Interior storage consists of a moderate-size glovebox, a decent-size console box with SD-card slot and 2 USB ports (though it’s far back and difficult to see the plugs), a small forward console bin with 12-volt outlet, and large map pockets. The trunk is wide at the rear and large enough overall, but sickle-shaped hinges dip into the load area (though they’re covered to prevent luggage damage), the floor isn’t flat all the way across, and folding the rear seat backs leaves a sharp, 4-inch step-up that prevents large items from being easily slid all the way forward.

Our Premium Collection test car had but one option: a $995 coat of paint. What it did not have were heated seats (which come in a Winter Package that was oddly missing from our Chicago-area tester) or adaptive cruise control – rather unusual omissions at this price point. That’s not to say it was “stripped,” as it came with most other trappings you’d expect, along with a handy head-up display.

For better or worse, there’s little that’s traditional Cadillac here. But the ATS should indeed appeal to a youth market that the brand has long been ignoring.

We drive the electric Cadillac ELR