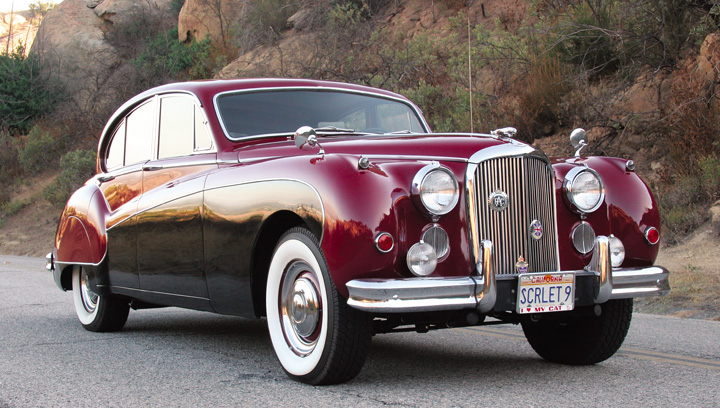 The 1959 Jaguar Mark IX was one of the few sedans of the era to boast a DOHC engine.

Note: This article is reprinted from the October 2013 issue of Collectible Automobile.

Jaguar was duly famous for its sports car in the Fifties and Sixties, but it was sedans that paid the bills.

During World War II, Jaguar decided to develop a dohc engine that would power sedans capable of 100 mph. Only race cars and exotics such as Duesenberg, Bugatti, and Alfa Romeo had used such a valvetrain before World War II. The twin-cam’s efficient breathing allowed Jaguar’s XK engine to wring 160 bhp from a 210-cid six—the same power as Cadillac’s 331-cid V-8 introduced at about the same time.

Because the XK was designed to serve sedans, it was also smooth, silent, and durable. Jaguar made sure the engine looked impressive with polished-aluminum cam covers. It would be in production for 44 years and power Le Mans winners, limousines, and even tanks.

In order to ramp up XK engine production before volume use in sedans, the first car to get the powerplant was the XK120 sports car introduced at the 1948 London Motor Show. For 1951, Jaguar introduced the XK-powered Mark VII sedan. Styling was of the stately English school, but the Mark VII lost the prewar look of earlier Jaguar sedans. Inside, though, there was still as much wood and leather as a prewar Rolls-Royce or Bentley. Thanks to a 120-inch wheelbase, the interior was also roomy. 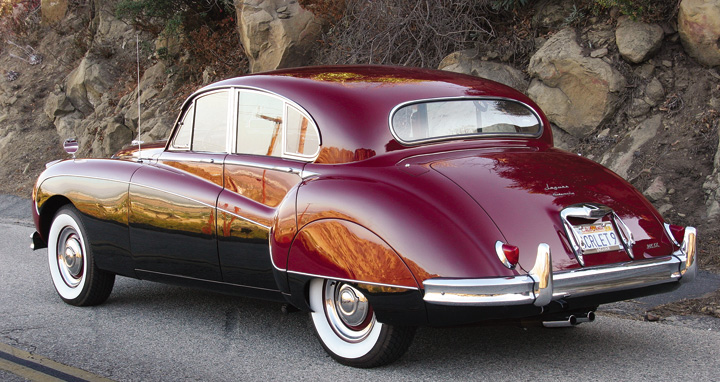 Though far from lightweight, the Mark IX was good for a reported 114 mph.

The Mark VII shared the XK120’s torsion-bar independent front suspension and had good handling for a large sedan. Although the Mark VII weighed more than 3700 pounds, it had a top speed of 101 mph and did well in rallies despite its size.

Jaguar hoped that a large (by British standards), comfortable sedan with good performance would do well in the American market. One American impressed by the Mark VII was Road & Track editor Bill Corey. Corey took a Mark VII on a road trip in ’52 and wrote, “[W]e cruised the car at slightly under ‘red-line’ on the tach, about 100 miles per hour. There is no question that this is the greatest highway car your author has ever had the pleasure of driving. The mountain curves through Arizona were negotiated as if we were on rails.” Corey went on to say, “[S]ome of the detours we encountered defied description. They offered a chance to break the heart of the Jag, and try we did. We drove 70 [mph] over roads that other cars could scarcely negotiate at 25. Nothing broke. Nothing happened. Not a squeak nor a rattle. Nothing.” 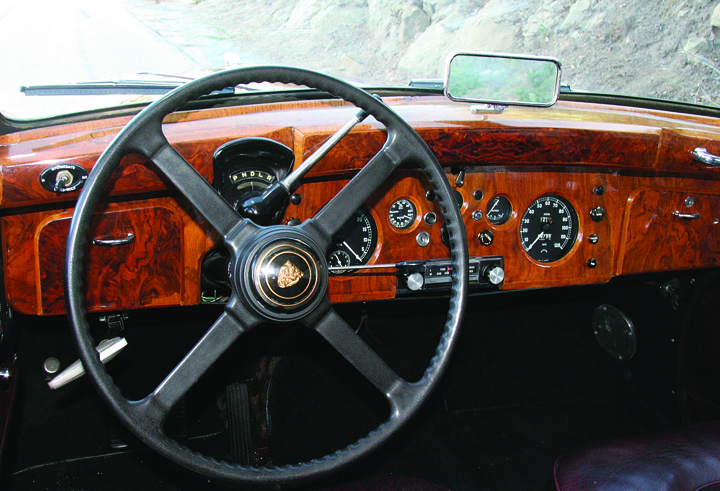 Our Photo Feature car was equipped with a 3-speed automatic transmission.

A Mark VIII was introduced in 1956 with more power and revised styling. The Mark IX of 1959 looked virtually the same as the Mark VIII, but had several important improvements. The XK engine had grown to 231 cid (3.8 liters) and horsepower was up to 220. Top seed was now 114 mph with 0-60 mph in 11.3 seconds. To handle the extra power, Mark IXs gained four-wheel disc brakes. Power steering was standard and must have helped sales in the U.S., as did the Borg-Warner three-speed automatic transmission—standard on cars bound for America. The Mark IX was in production through 1961, when it was replaced by the longer and lower Mark X, which didn’t sell as well.

When photographed, our featured ’59 Mark IX was owned by Peter Rothenberg of West Hills, California. This car retains its factory tool kit. Perhaps as a comment on Jaguar reliability, an unusual collection of tools and spares was mounted in recessed compartments in the doors, including light bulbs, a spark plug, and a grease gun.