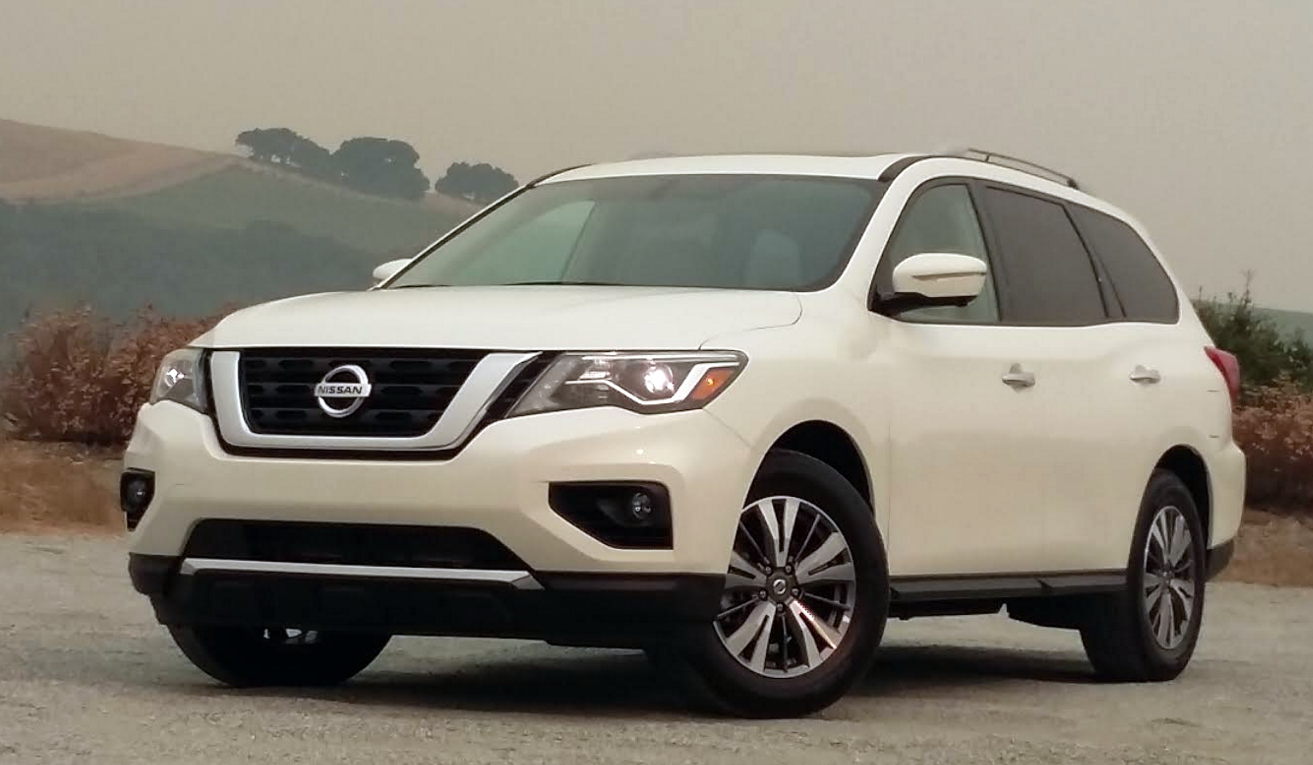 It doesn’t look all that much different, but Nissan’s 3-row midsize SUV receives some notable changes for 2017. By the way, that’s not California’s famous coastal haze in the background; it’s forest-fire smoke.

In a previous post based on a July reveal of the freshened 2017 Nissan Pathfinder, we covered what’s new for the model year, along with the various trim levels and equipment offered. In a nutshell, Nissan’s 7-passenger midsize SUV has been significantly updated with revised styling, a more powerful engine, and several new features. This report covers a drive opportunity afforded us in beautiful — though at the time, smokey (due to nearby forest fires) — Monterey, California. 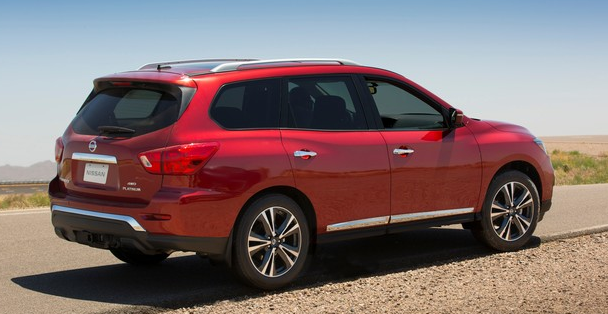 Visibility is a Pathfinder strong point, as is powertrain performance. As before, it’s offered in both front- and all-wheel-drive versions.

Step inside the Pathfinder and you’ll find that visibility is good to the front corners, fair to the sides, and good to the rear, the last benefitting from 3rd-row headrests that flip forward to unclutter the view (wish 2nd-row ones did the same). There are plenty of padded surfaces, and the overall look, particularly with the available two-toning (which may be light-colored enough to make it hard to keep clean) and wood trim, is quite upscale.

The tallest drivers may wish for more headroom and legroom, but most will find it adequate, and step-in height is low. There’s good room in the 2nd row – though adults ride slightly knees-up – and the seat slides fore and aft several inches to balance legroom with the 3rd row. The 2nd-row seat cushion flips up and the seat slides forward to allow easy access to the 3rd row – eased further by a large door opening and only slightly tall step-in height (higher than in front) – and you can even do it with a child seat installed, though the cushion won’t flip up. Unlike many 3rd rows, it’s not for children only, as my 5’9 frame fit quite comfortably, though in a knees-up posture. Both the 2nd- and 3rd-row seat backs fold down to create a large, flat-floor cargo area. 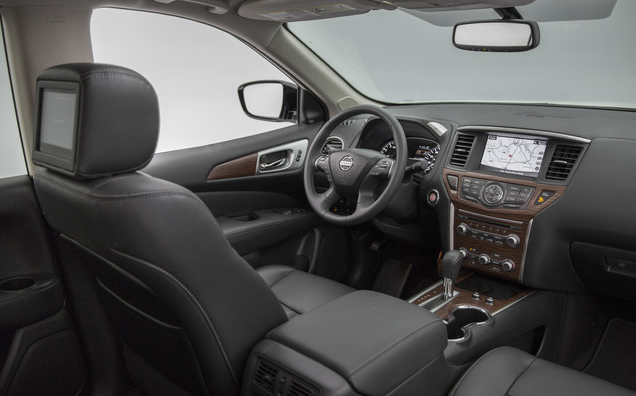 A two-tone combination can substitute for this all-black interior, but either way, upper-line models boast some ritzy furnishings. The infotainment controls are unusually easy to decipher and use.

The infotainment system deserves some praise. Not only are there volume and tuning knobs (an increasing rarity), but also six physical station-select buttons (which – these days – warrants a “!”), and the navigation controls likewise have buttons and are located in an easy-to-reach, easy-to-decipher separate panel (double “!”). Climate controls are mounted a bit low, but consist of rotary knobs for temperature and fan speed, less-convenient repetitive-step pushbuttons for mode.

According to Nissan, some folks seemed to think the former Pathfinder’s ride/handling combination was a bit soggy (and we’d tend to agree), so things have been stiffened up a bit on the new model. There’s still good compliance over bumps – at least over those we encountered on our California drive route – and body lean in turns seemed better controlled. And a brief drive on a surprisingly challenging off-road course proved the Pathfinder could do more than just mosey down the boulevard.

One thing that didn’t need much work was Pathfinder’s power delivery. Its 3.5-liter V6 provides a good full-throttle jump off the line, and the CVT automatic transmission kicks down quickly for more passing power. And unlike some CVT powertrains, there’s little of the “rubberbanding” effect (engine speed quickly rising and staying at a high rpm under acceleration) that some people find objectionable. In fact, in normal driving, you might not even notice anything unusual at all. 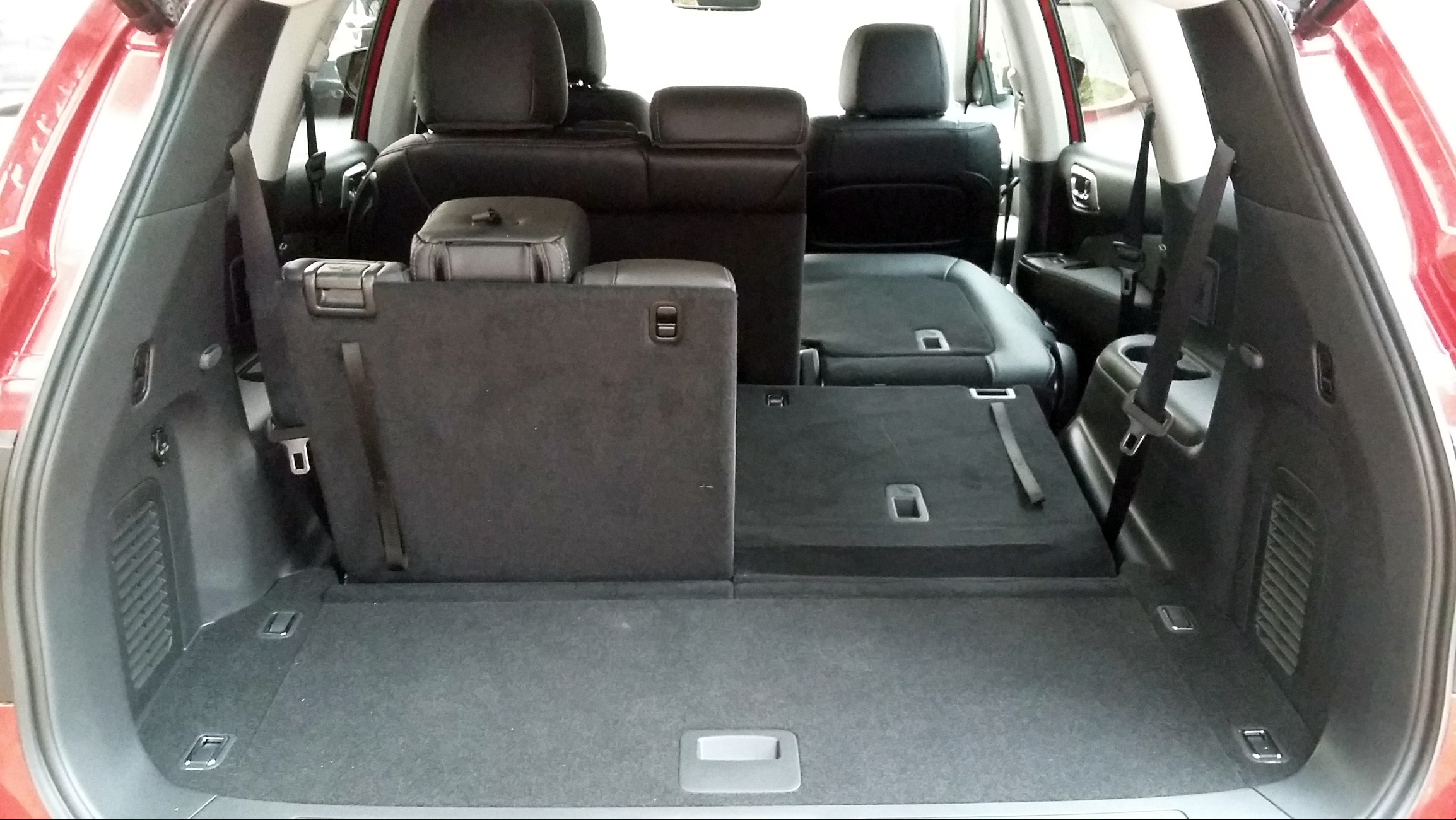 What it amounts to is that the revised Pathfinder offers some notable advances over the outgoing model while maintaining its strengths, all of which makes it competitive with the newest and best in this class.