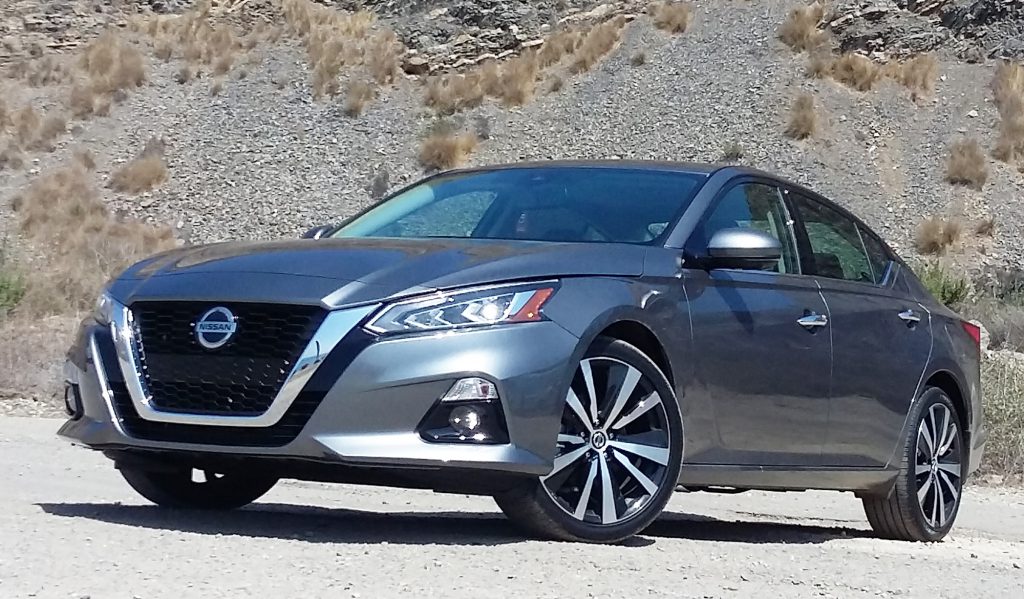 In the midsize-sedan game, the King and Queen have long been the Toyota Camry and Honda Accord, both of which were redesigned for 2018. But in recent years, Nissan’s Altima has made a surprisingly strong showing, and with its redesign for 2019, it comes to the table with an Ace up its sleeve. 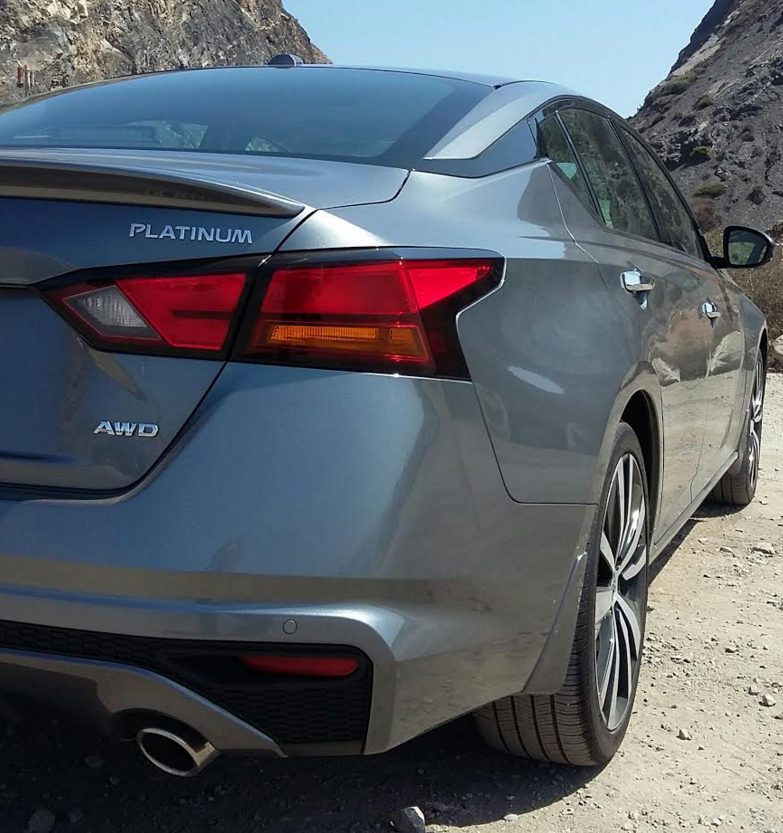 It’s subtle, but that “AWD” badge at the bottom of the trunklid speaks volumes.

That “Ace” is all-wheel-drive. And not only does it mark the first time a Nissan car has offered it in the U.S., it gives the Altima a prominent feature its top rivals don’t offer; in fact, only three other midsize cars do: the Ford Fusion, and the Subaru Legacy sedan and Outback wagon. Furthermore, AWD is available on all Altima trim levels as a $1350 option — with one caveat and one short-term exception, which we’ll get to in a bit.

Returning as the base engine in all models but one is a 2.5-liter four, but Nissan says this 2.5 is 95-percent new. It gains nine horsepower over the previous engine for 188 total, and it’s again mated to a CVT automatic transmission. Replacing last year’s “step-up” 3.5-liter V6 with 270 horsepower is a turbocharged 2.0-liter four with 248 horsepower, also mated to the CVT automatic. And herein lies the “caveat”: all-wheel drive is only offered with the base engine, not the turbo, while the “short-term exception” is the limited-production, front-wheel-drive-only Edition ONE launch model — of which only 3900 will be built — which comes standard with the turbo engine. EPA fuel-economy figures with the 2.5-liter engine come in at 28 mpg city/39 highway/32 combined with front-wheel drive (1-2 mpg lower on the SR and Platinum), 26/36/30 with AWD. With the 2.0-liter turbo, they’re 25/34/29.

Although this is admittedly the line-topping Platinum, styling of any 2019 Altima isn’t likely to be described as “bland.” Thin roof pillars really aid the view out, and the Platinum comes with a 360-degree camera system.

Anchoring the Altima lineup is the entry-level S, which starts at $24,645 including the $895 destination charge — meaning the least-expensive AWD Altima lists for $25,995. It’s offered only with the base engine and includes such items as an 8-inch touchscreen, satellite radio, Apple CarPlay/Android Auto, 8-way power driver seat, keyless access and starting, rearview camera, forward collision warning and mitigation, a tire-pressure monitoring system with individual tire-pressure readouts (a nice touch), Easy Fill Tire Alert (ditto), and Intelligent Driver Alertness, which uses steering-wheel inputs to determine if the driver is getting drowsy. Optional are 17-inch alloy wheels to replace the standard 16-inch steel ones.

Next up is the sporty SR, which Nissan expects to be the most popular model. With the 2.5-liter engine, it starts at $25,995, while a version with the  2.0-liter turbo (and a few other features) starts at $30,045. Standard items added are a sport suspension (except with AWD), 19-inch alloy wheels, a rear spoiler, dark-chrome grille, unique interior trim, paddle shifters, and blind-spot and rear-cross-traffic alert. Optional is a Premium Package containing a moonroof, heated front seats, and heated mirrors, all of which are standard on the 2.0-liter turbo model.

Again the Platinum, and again … hardly bland — at least in the available two-tone interior treatments with ritzy wood trim. Both passenger room and storage space could be a bit better, though.

Moving up to the $30,735 SL — also offered only with the base engine — gets you leather upholstery, 4-way power front passenger seat, Bose premium sound system, traffic-sign recognition, and NissanConnect telematics and navigation system. 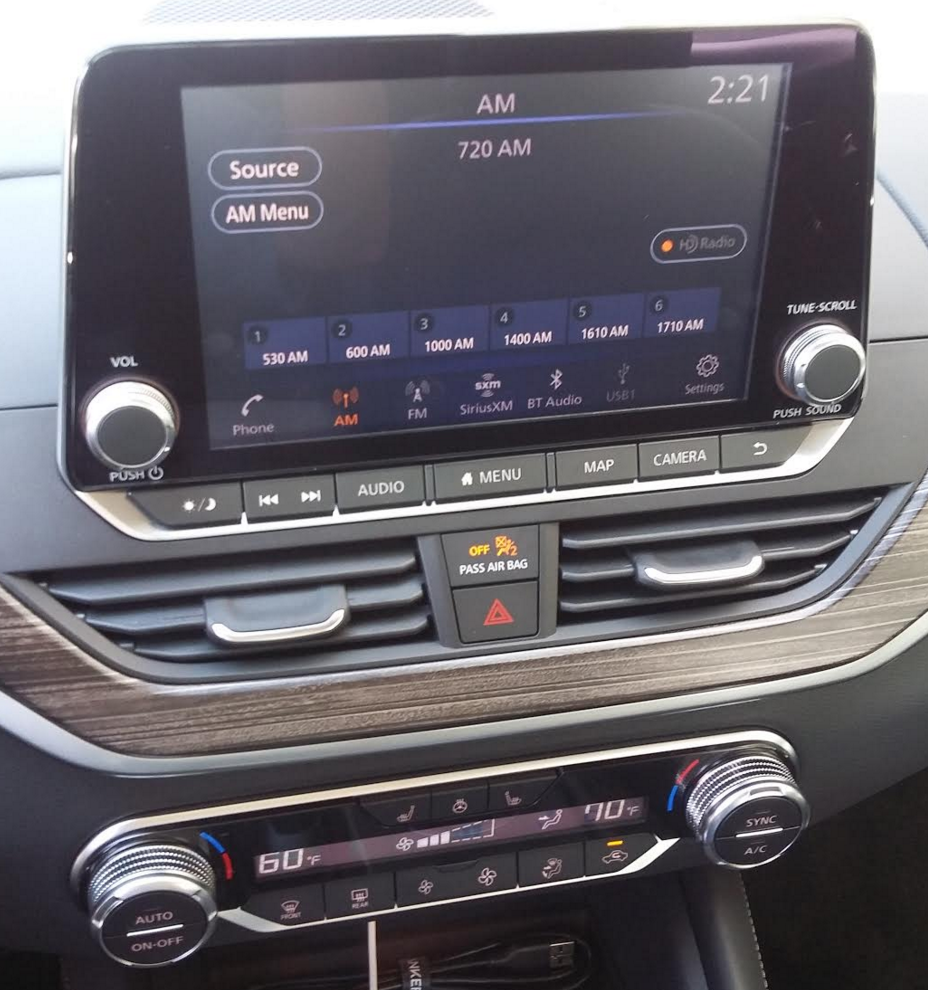 Audio and climate controls are very easy to reach and generally easy to use, and an 8″ dash screen and Apple CarPlay/Android Auto are standard. The “CAMERA” button below the lower right of the screen allows Platinum buyers to choose front and side views, the latter helpful in preventing wheel scrapes on curbs when parking; we just wish the 360-degree system was offered on more models.

Topping the “regular” lineup (which soon won’t include the Edition ONE that adds mostly cosmetic items) is the Platinum, which starts at $32,685 with the 2.5-liter engine, $35,675 with the 2.0 turbo. It adds 19-inch alloy wheels, memory driver seat, and 360-degree cameras.

At the press preview in California, we briefly drove both a top-line Platinum with the 2.5-liter engine and AWD, and a sporty SR with the 2.0-liter turbo.

While neither engine provides a strong full-throttle jump off the line, they both move out well enough, and the turbo is noticeably stronger as speed builds. In both cases, the transmission kicks down fairly quickly when the throttle is stabbed while underway. Over what pass as “bumps” in California, the sport suspension of the SR makes the ride a bit stiffer and noisier (we’ll get a better feel for this in a Chicagoland test), but also seems to sharpen handling a bit.

As expected of a midsize sedan, there’s good (though not great) room inside for four adults. Tall folks should note that Nissan’s specs indicate the moonroof eats up 1.2 inches of front headroom (just .2 in back), and rear-seat headroom might be tight for 6-footers. The standard power driver seat includes a tilt cushion — a nice touch — and starting with the SV trim level, you get power lumbar adjustment — also a nice touch. The Platinum also includes driver-seat memory, but as there is no power tilt/telescopic steering column, that doesn’t adjust automatically. Visibility is good all around, and the 360-degree camera system on the Platinum has a dashboard button that can be used to bring up front and side views, the latter helpful in avoiding curbs when parking. 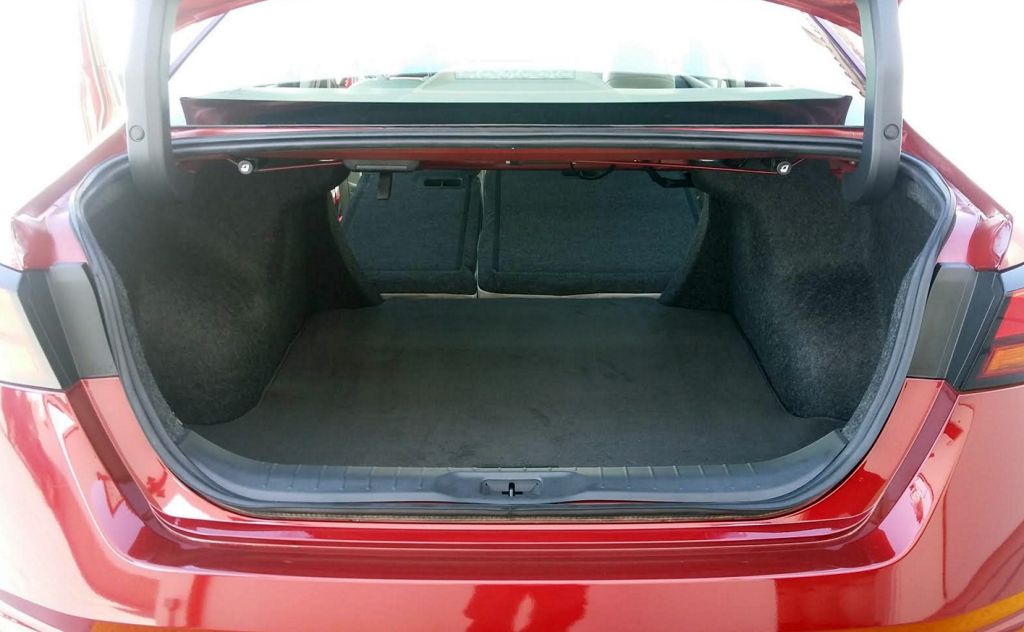 Though the trunk is wide at the rear and decently sized, sickle-shaped lid hinges dip into the load area, and the folded rear seat backs rest about two inches above the floor of the trunk, which makes it difficult to slide long items forward.

The audio system includes an 8-inch touchscreen flanked by volume and tuning knobs, all within easy reach. Likewise easy to reach and use are the climate controls, so these rank as a “plus.”

The trunk is wide at the rear, but sickle-shaped hinges dip into the load area, and there’s just a small amount of underfloor storage. Folding the rear seat backs leaves a 2-inch “step” that prevents long items from being easily slid forward (though that’s about par for the class), and the pass-through is a bit restricted.

It used to be that the midsize class was the most popular in all of autodom, and though it has recently been eclipsed in sales by compact crossovers, it’s still big. And that has made all the competitors really good. While the Altima is competitive in most ways with the league-leading Camry and Accord, at least in northern states, its available all-wheel drive may well give it the upper hand.

Already a very competitive entry in the midsize class, the redesigned 2019 Altima now has the added advantage of available AWD, which will almost assuredly swing more buyers its way.