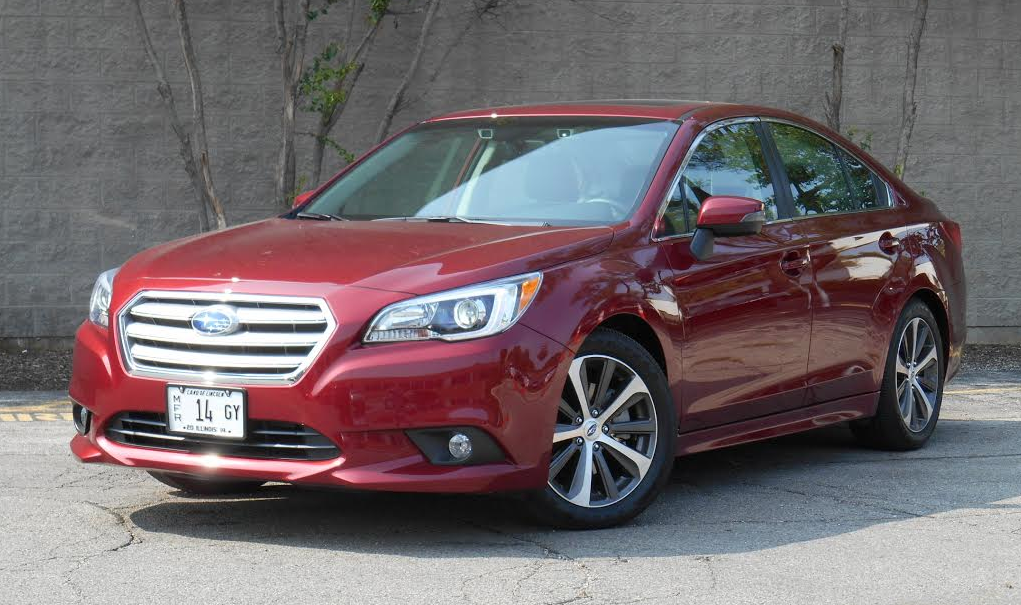 Consumer Guide’s test 2015 Subaru Legacy arrived in 3.6R Limited trim with the Moonroof Package. As tested, the  well-equipped midsize sedan listed for $33,380 including the destination charge.

The not so good: Push-button/touch-screen controls where rotary knobs would serve better, middling fuel economy

Subaru has an all-new version of its Legacy midsize sedan on the market for 2015 with first-time standard features like active torque vectoring, electric power steering, and across-the-board touch-screen infotainment display and back-up camera. It has made the Legacy quieter and more capacious, too. All in all, it’s an extremely pleasing driver at an attractive price. 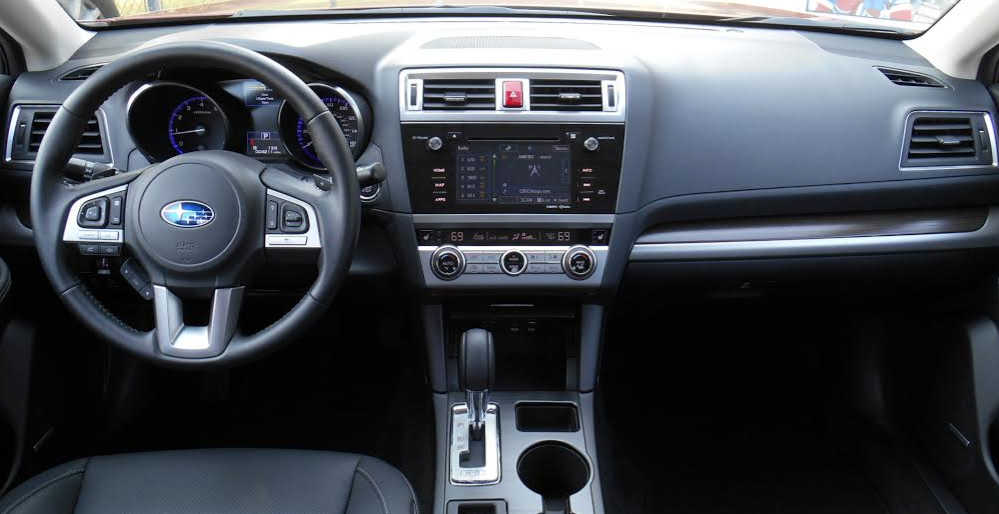 Though not opulent, the Legacy’s cabin is handsome and nicely enough appointed.

Consumer Guide® tested a top-level Legacy Limited with Subaru’s 3.6-liter “boxer” 6-cylinder engine and Lineartronic continuously variable transmission (CVT). Some CVTs let an engine flail noisily as it struggles to build power and speed, but not the Lineartronic. The Subie six, which generates 256 horsepower at 6000 rpm and 247 pound-feet of torque at 4400 rpm, gets the Legacy off the line smartly, and delivers good highway cruising and passing power without a lot of racket. (Control freaks can set the CVT in a 6-speed manual mode and shift via steering-wheel paddles.) This driver’s test stint of 107.5 miles, 61 percent of which was under city-traffic conditions, averaged 21.67 mpg. The EPA estimates for this powerteam are 20 mpg city, 29 highway, and 23 combined, so my experience was about on the mark. 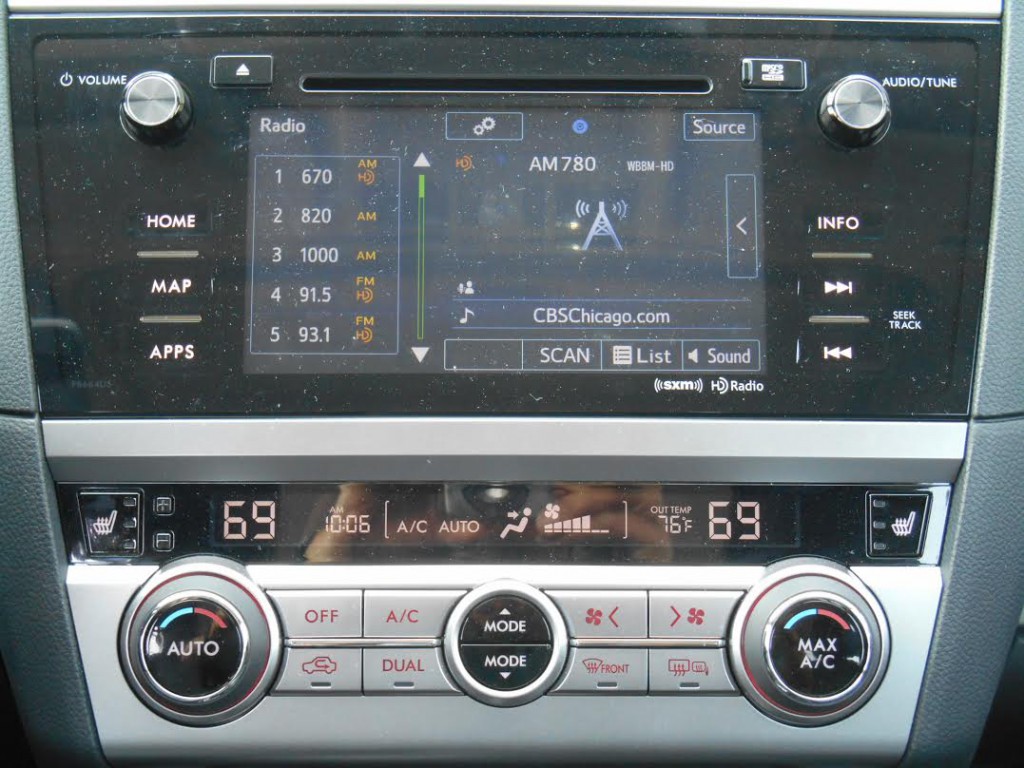 Our editors weren’t altogether crazy about the touch-screen control system, or the push-button fan-speed controls.

The 6th-generation Legacy retains a suspension set-up consisting of MacPherson struts in front and double wishbones in back, plus Subaru’s de rigueur Symmetrical All-Wheel Drive. The ride is never too soft to not let you know what’s under the car, but road shocks are absorbed well, and the car stays composed over highway expansion joints and other surface disruptions. The steering is nicely weighted and responsive, and the brakes deliver prompt, sure stops.

One knock against the previous Legacy generation was that it wasn’t overly plush, even in Limited form. The 2015 version provides a nice, if not overtly sybaritic, cabin environment. Soft-touch surfaces cover much of the doors and instrument panel. Satin-silver plastic trim on the center stack and woodgrain sections on the dash and doors add some eye appeal. On the Limited, standard perforated leather dresses comfortable seats front and rear. Subaru says it used methods like acoustic windshield glass and liquid-filled engine mounts to turn down the volume on noise. We thought outside traffic sounds were well filtered, but some wind whistle was audible.

There is good head and leg room available for four adult passengers. CG’s test car was equipped with the optional moonroof, but provisions were made in the headliner to give rear passengers as much space as possible. The new Legacy adopts a coupelike roof design, but that didn’t seem to create any problems for rear-seat entry and exit. Over-the-shoulder visibility is a little crimped, however.

The Limited has a 7-inch central touch screen with swipe, scrolling-gesture, and voice-activated control. Other controls are well placed for visibility and ease of access. An external tuning knob makes it easy to find radio stations, and a touch on the screen at the appropriate spot saves them. Climate controls consist of a few function buttons (including a repetitive-push fan-speed button—a minute quibble). Rotary dials govern the dual-zone temperature settings. Digital time and temperature readings show up on a small screen that can be hard to read while wearing polarized sunglasses. The back of the center console holds buttons for the standard rear seat heaters.

Interior storage for front passengers consists of a decently sized glove box, long door pockets with bottle holders, a deep console box with a change tray (the lid forms a central arm rest), and 2 cup holders inset in the console. There’s also a covered bin where the console meets the dash. This bin contains various external-media ports. It’s covered with a pop-up door, but on our test car, the door needed a forceful push to open, which resulted in pinched fingers. In the rear, door pockets are big enough for a bottle. Other storage space includes pouches on the back of each front seat. A pull-down center armrest contains 2 cup holders.

For 2015, the Legacy’s trunk capacity has been enlarged slightly to 15 cubic feet. It’s a big, flat-floored space, and the carrier for the tire-changing tools located under the floor has some unclaimed territory that could hold a few small items. An expansive annex opens up when backs of the split-folding rear seats are retracted. They don’t fold perfectly flat, but cover panels create a smooth transition from trunk to interior.

As the Legacy’s top model, the 3.6R Limited starts at $29,595. That brings features like 18-inch alloy wheels; a 2-position memory driver’s seat; Harmon/Kardon 12-speaker audio system; satellite radio; blind-spot detection; rear cross-traffic alert; high-intensity headlamps; and the EyeSight driver-assistance system with features like adaptive cruise control, precollision braking, and lane-departure warning. The sole option on our sample Legacy was a $2990 package with the moonroof, keyless access, push-button starting, and navigation. With delivery, the price of our test car came to $33,380, right in line with other midsize sedans we’ve driven recently, some of which didn’t have all-wheel-drive.

Subarus are synonymous in my book with two things: all-wheel drive, and great visibility. (Also for easy access to normally tough-to-get-at underhood parts such as the water pump and alternator, but that’s just the ex-mechanic in me talking.) And in those regards, the new Legacy doesn’t disappoint. Well, maybe a little. Many Subarus – including the Legacy – used to have frameless door glass, the main benefit being better over-the-shoulder visibility. Legacys now have conventional framed windows, and that hurts side visibility just a bit. But the front and rear roof pillars are still far thinner than most, maintaining one element I’ve always liked about Subarus.

Our 3.6R Limited also had many other elements I rather liked. John mentioned the composed ride, though I think he may have glossed over it a bit; this car rode really well. The engine – though hardly powerful “on paper” for a 3.6-liter six – pulled strongly, felt smooth, and made decent noises. Interior storage was about on par with others in the midsize-sedan class, but cargo-space versatility was a bit better than average, as the rear seat backs folded almost flat (there’s a “ramped” panel to allow long items to be easily slid forward) to reveal a good-sized opening, and there was added cargo space beneath the trunk floor. Passenger space was also good, with easy egress from the rear seat thanks to large door openings.

I wasn’t quite as enamored with the control layout. Our tester had a navigation system, which often absorbs and complicates what should be simple audio functions, and that was the case here. Furthermore, some controls, such as the tuning knob, were too far to the right, out of easy reach. Also, the climate controls for fan and mode were repetitive-step pushbuttons, which I find tedious to operate and require a longer look from the road than good ol’ fashioned rotary knobs. But that’s the way most cars these days are going.

Even if you don’t need the benefits of all-wheel drive (and I believe most people would benefit from it more than they think), the Legacy strikes me as a pretty darn good deal. Back out the $2990 sunroof/navigation package our car didn’t need, and the $29,595 price seems almost a bargain for a six-cylinder sedan with this level of equipment. Up here in snow country, the Legacy has always struck me as a top choice in a very competitive segment, but it may even be so if you live in an area where a “winter weather watch” merely means that rain is in the forecast.